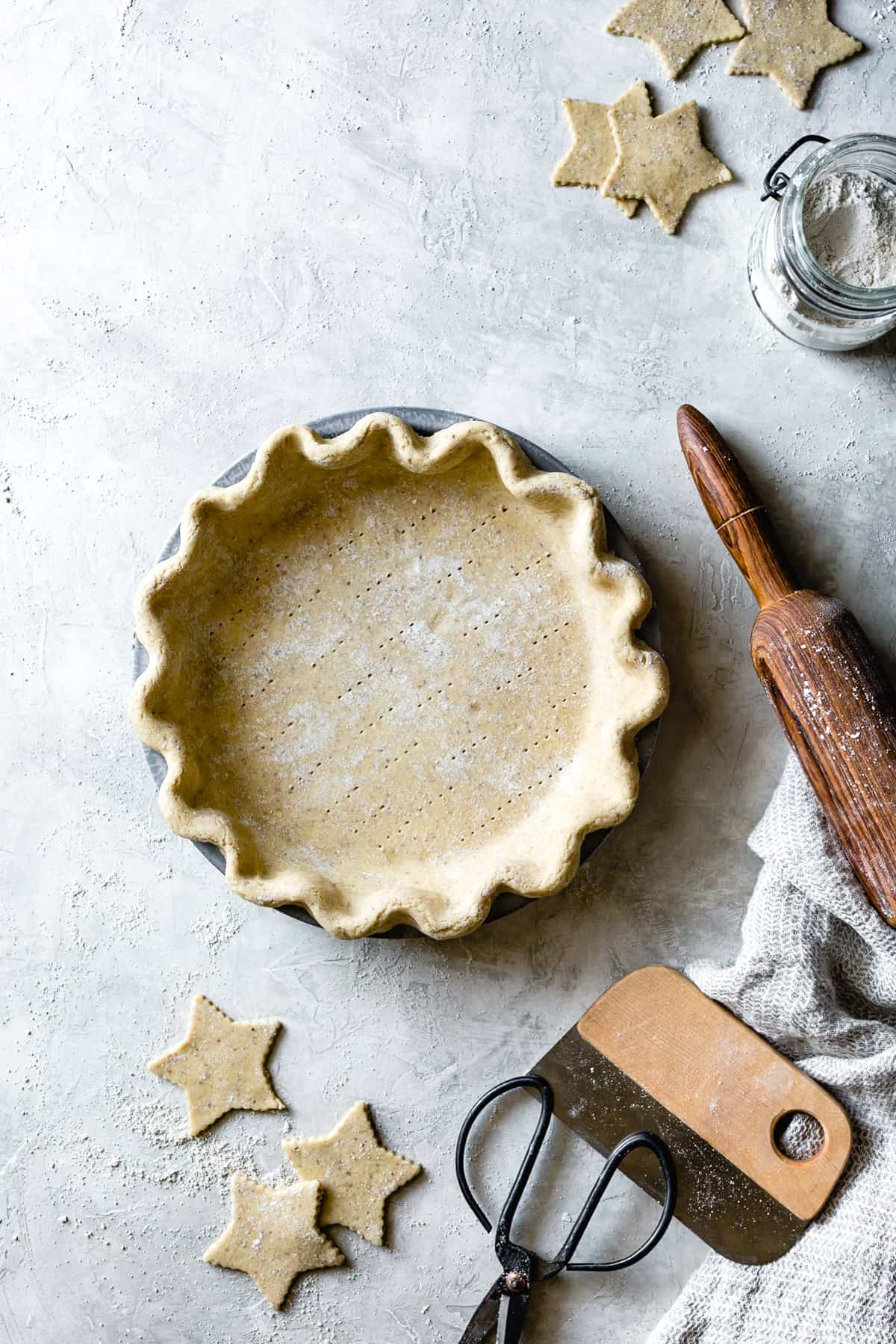 Looking for a flaky gluten-free pie crust that tastes like it was made with whole grain wheat flour? I've spent years developing a recipe that tastes and feels like my best whole wheat pie crust – light, crisp, buttery and flaky. 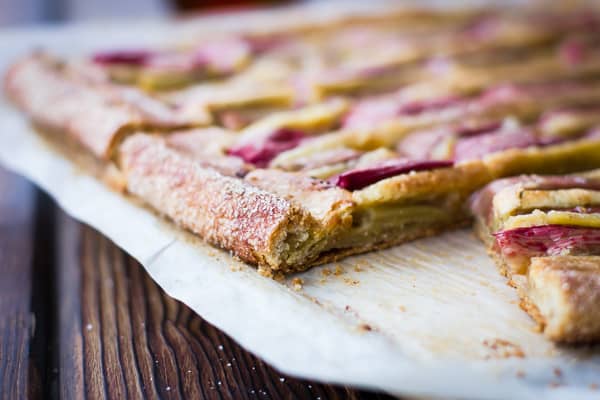 I adapted this recipe from an original foray into gluten-free pie making courtesy of this gluten-free apricot galette. I made a few changes along the way, detailed below, and eventually hit on a pie crust that I sometimes forget is gluten-free.

According to About.com, xanthan gum is a polysaccharide (science speak for a carbohydrate made up of various types of bonded-together sugar molecules) that forms during a fermentation process involving the bacteria Xanthomonas Campestris and carbohydrates from corn, wheat, dairy, or soy. Xanthan gum has strong binding powers and helps to make gluten-free doughs extensible, or stretchy, mimicking sticky, gummy gluten.

When you tell someone there's xanthan gum in the charmingly homemade baked good you've just given them, an odd look usually crosses their face. The baked good in question suddenly seems a lot less charming and homey. The name and process by which xanthan gum is made both sound kinda creepy. It can be hard to find, most folks don't have it lying around the house, and some can't tolerate eating it.

For all these reasons, I like to do without it when I can, using naturally sticky ingredients in its place. Inspired by many of the gluten-free recipes in Aran Goyoaga's Small Plates and Sweet Treats, I decided to try replacing the xanthan gum with ground chia seed, which, like xanthan gum, is full of polysaccharides. The seeds provide a more natural way to help gluten-free baked goods hold together, plus they're full of healthy fiber and omega 3s, and they add a pleasant nutty flavor to baked goods. (If you're chia curious, this article is a wealth of knowledge.)

As for making the galette dough into a pie crust, I tried this several times, with some successes and some fails. The dough was fairly brittle – easy to form into a laid-back galette, but a bit tricky to wrestle into a pie pan, tending to crack apart on its journey from the counter into the pan. Once pressed into place, it sometimes baked up perfectly crisp and flaky; other times, for no apparent reason, it shrank and toughened in the oven. That would just not do.

I wanted a bit more dough in order to make a thicker crust, so I increased the flours, butter, and ice water. I tried varying amounts of ground chia seed until I hit on the right amount to help it hold together, but not too much to overpower things. To solve the toughness problem, I added a teaspoon of cider vinegar (and more recently buttermilk). And I increased the sugar a bit to cancel out the edge of bitterness that the millet flour adds.

I had tried making the galette dough with tapioca flour in place of cornstarch, but didn't like the results. I found here, though, that a little tapioca flour in addition to the cornstarch helped to make a smoother dough that held together better. (I also tried potato starch in place of the cornstarch, but since potato starch is hygroscopic [science speak for grabbing water molecules out of the air], this dough became soggy quickly. The dough made with cornstarch browned more readily, and it stays crisp for days.) 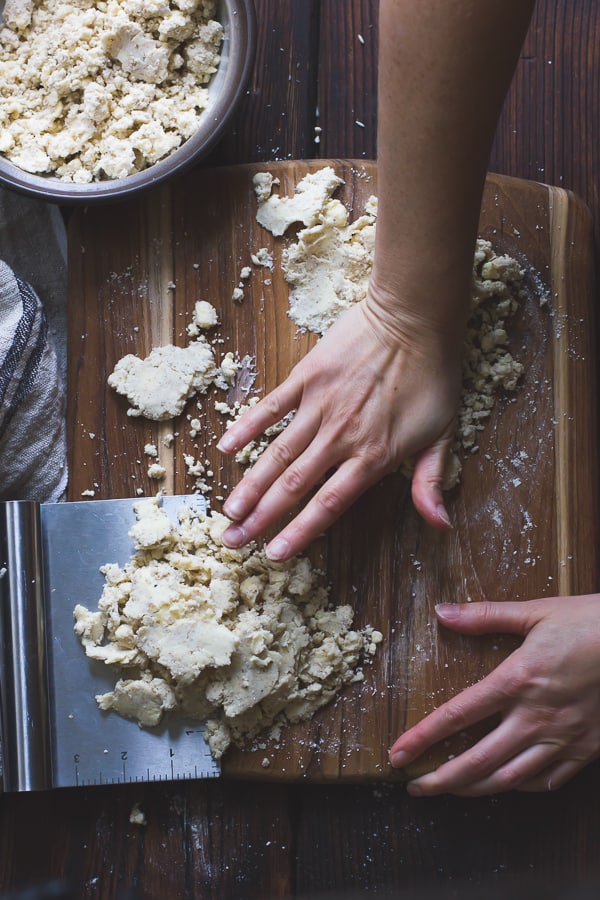 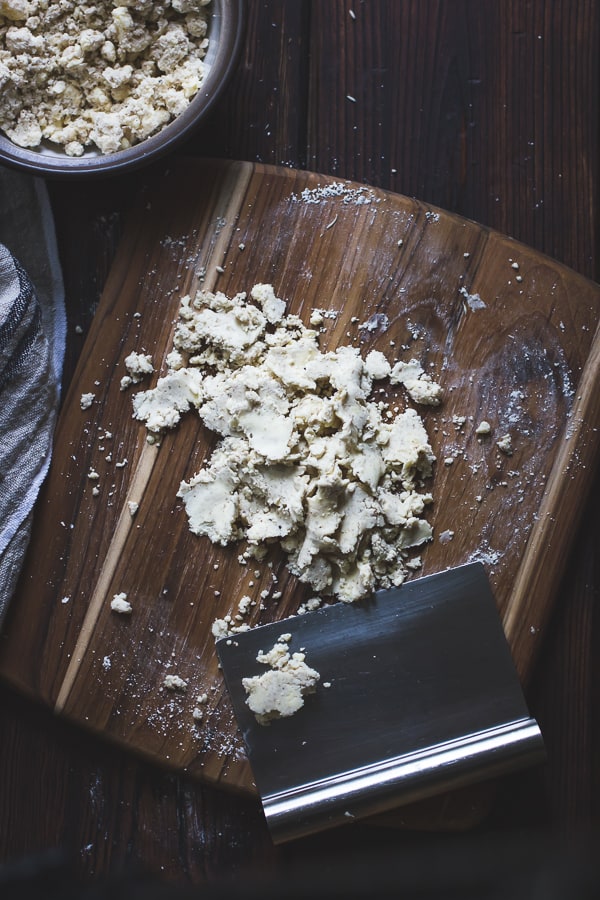 To bring the dough together, I usually like using the fraisage method, an old-school French technique wherein portions of the dough get smeared quickly across the counter. This has the effect of flattening the butter chunks into thin sheets, in a puff pastry-like manner. When these many layers of butter hit the heat of the oven, they release steam, raising the layer of dough above it, making for flaky pastry. I wondered if this step could be skipped, so I tried simply kneading the dough 10 to 20 times in the bowl. This produced a crust that was not quite as flaky as the one using the fraisage method, but still pretty great, especially for a gluten-free dough. 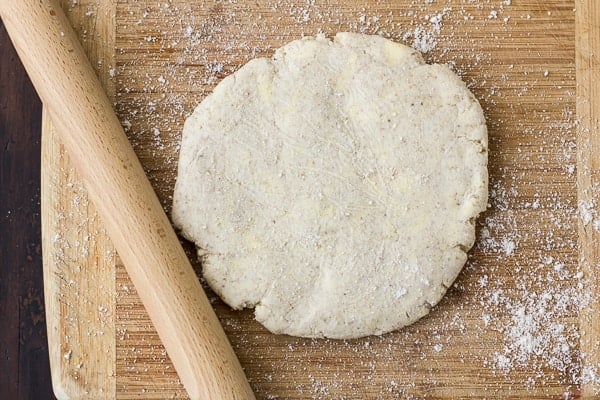 For extra flake, I like to take a cue from laminated doughs (such as puff pastry) and roll the dough out once, fold it up in thirds like folding a letter, roll that into a loose spiral, and then chill it again before rolling it into a round to stick in the pie pan. Called "a turn" when making croissant dough or puff pastry, this helps smooth out the dough, making it easier to work with, and it also creates more flake and layers. I liked the dough that got fraisaged, chilled and folded the best, but you can simply knead the dough in the bowl to bring it together if you prefer. 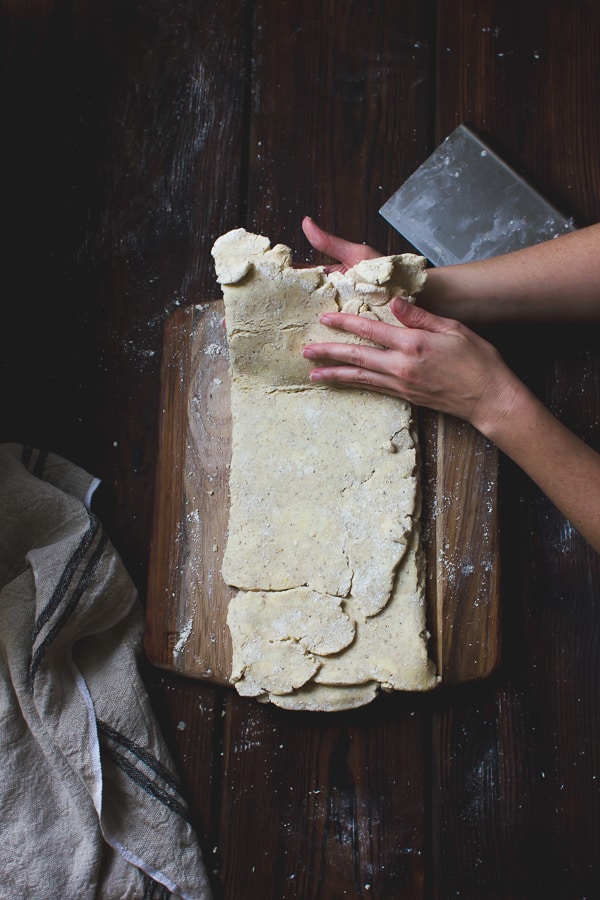 This gluten-free pie crust recipe is a pleasure to work with – smooth and fairly sturdy. It bakes up crisp, with a texture akin to a whole wheat pie dough – a bit denser than a white flour pie dough, and with a nutty, whole-grain flavor. The texture is crisp and buttery, and it stays that way even after a few days of being filled and baked, a feat for any pie dough.

Please leave a note if you give this gluten-free pie crust recipe a go, and feel free to ask any questions that may arise – I love answering them. Happy baking. 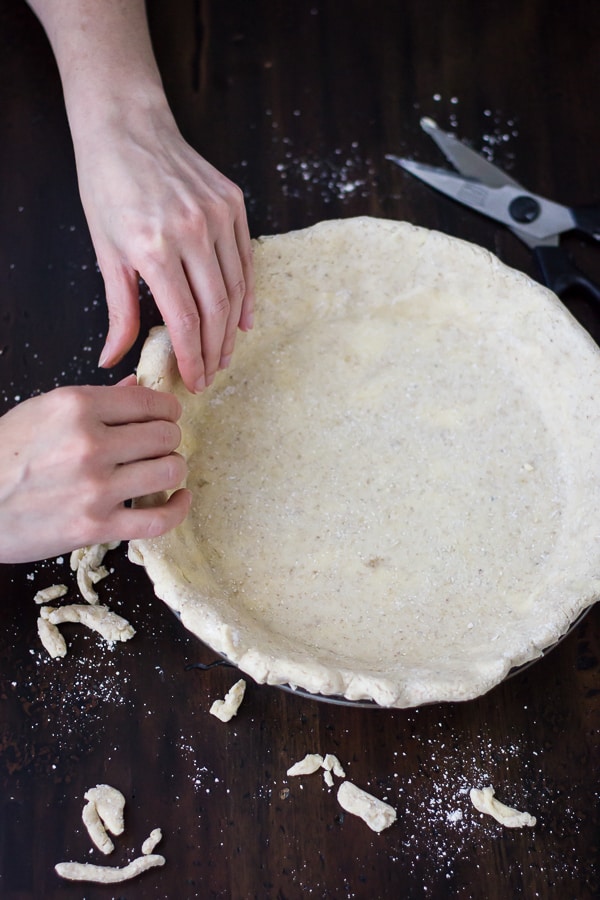 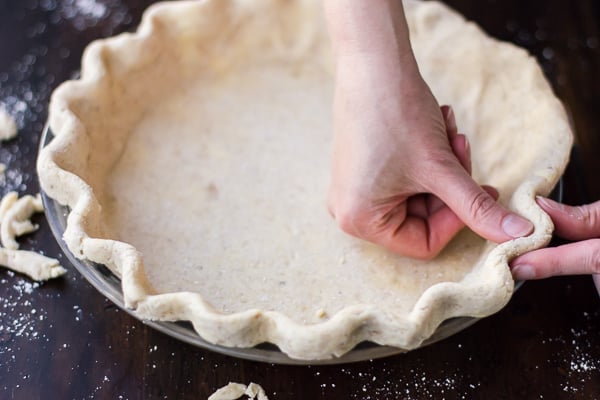 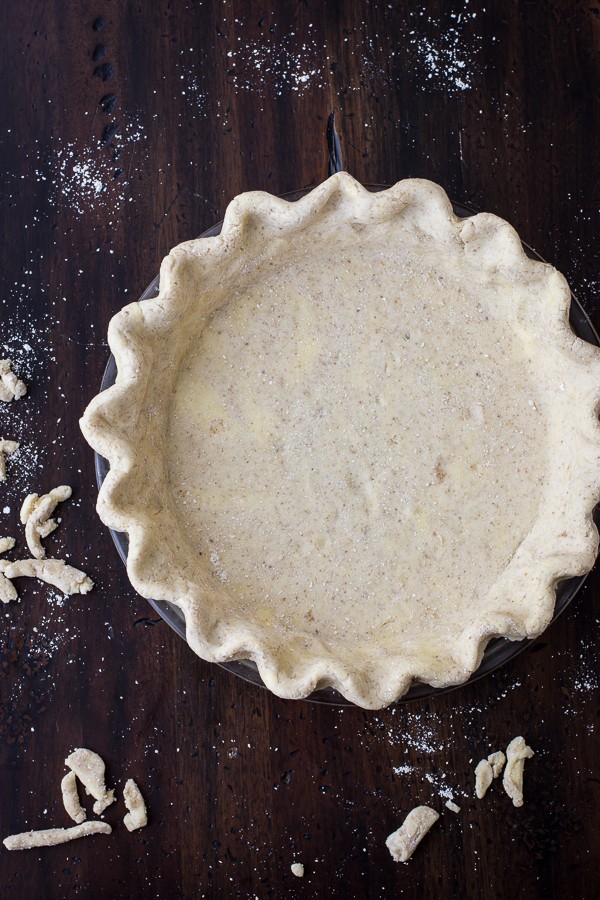 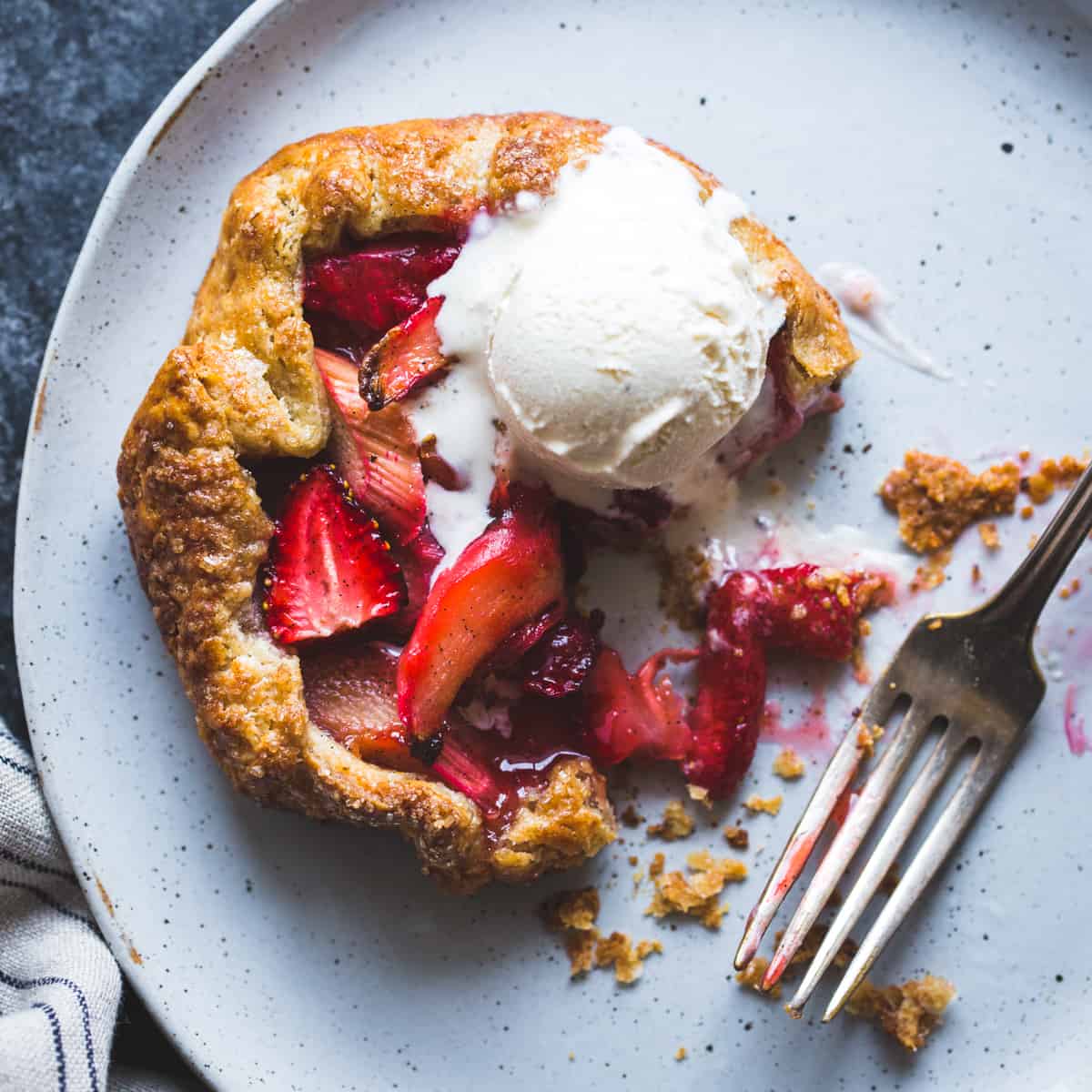 How to use your perfect gluten-free pie crust: 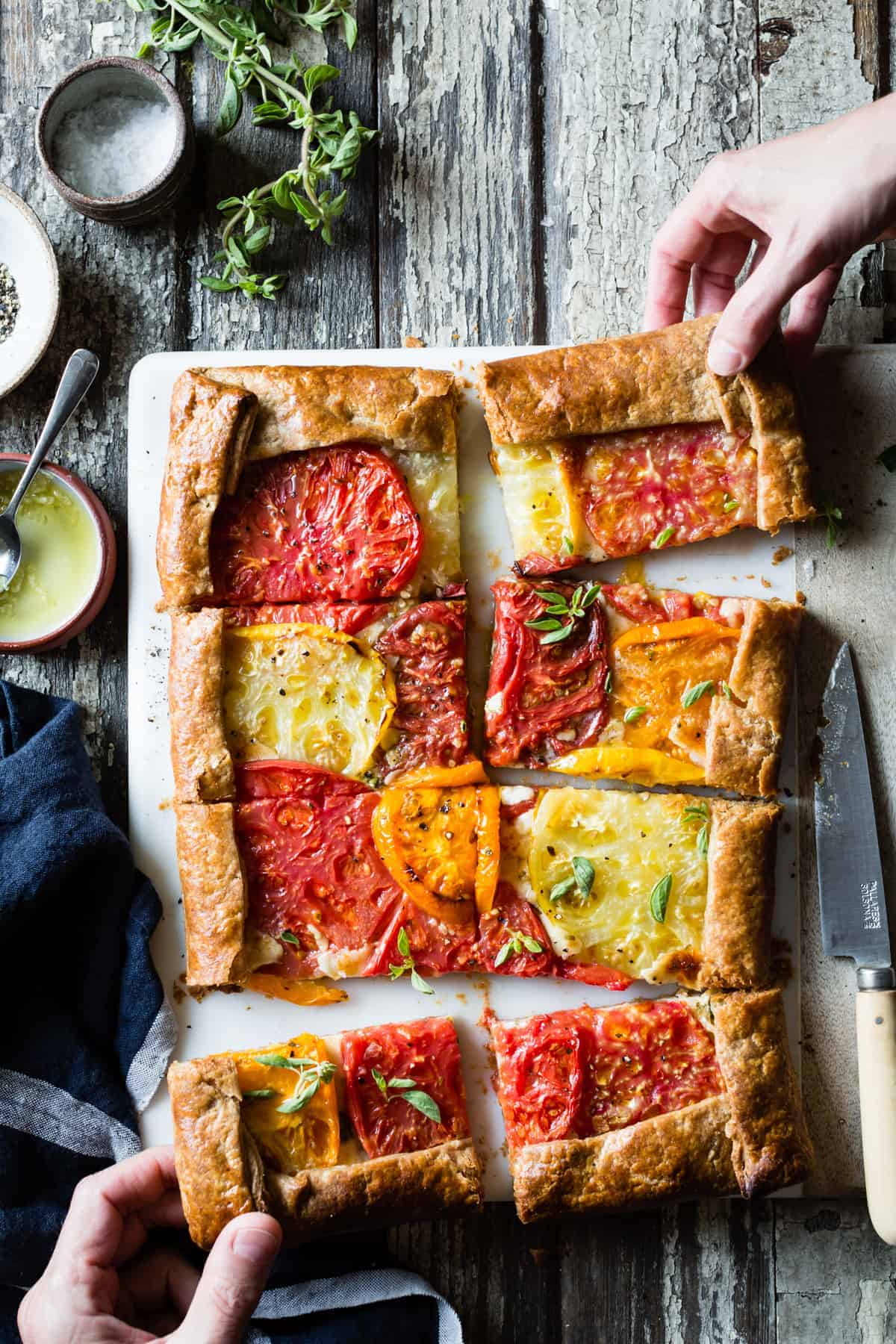 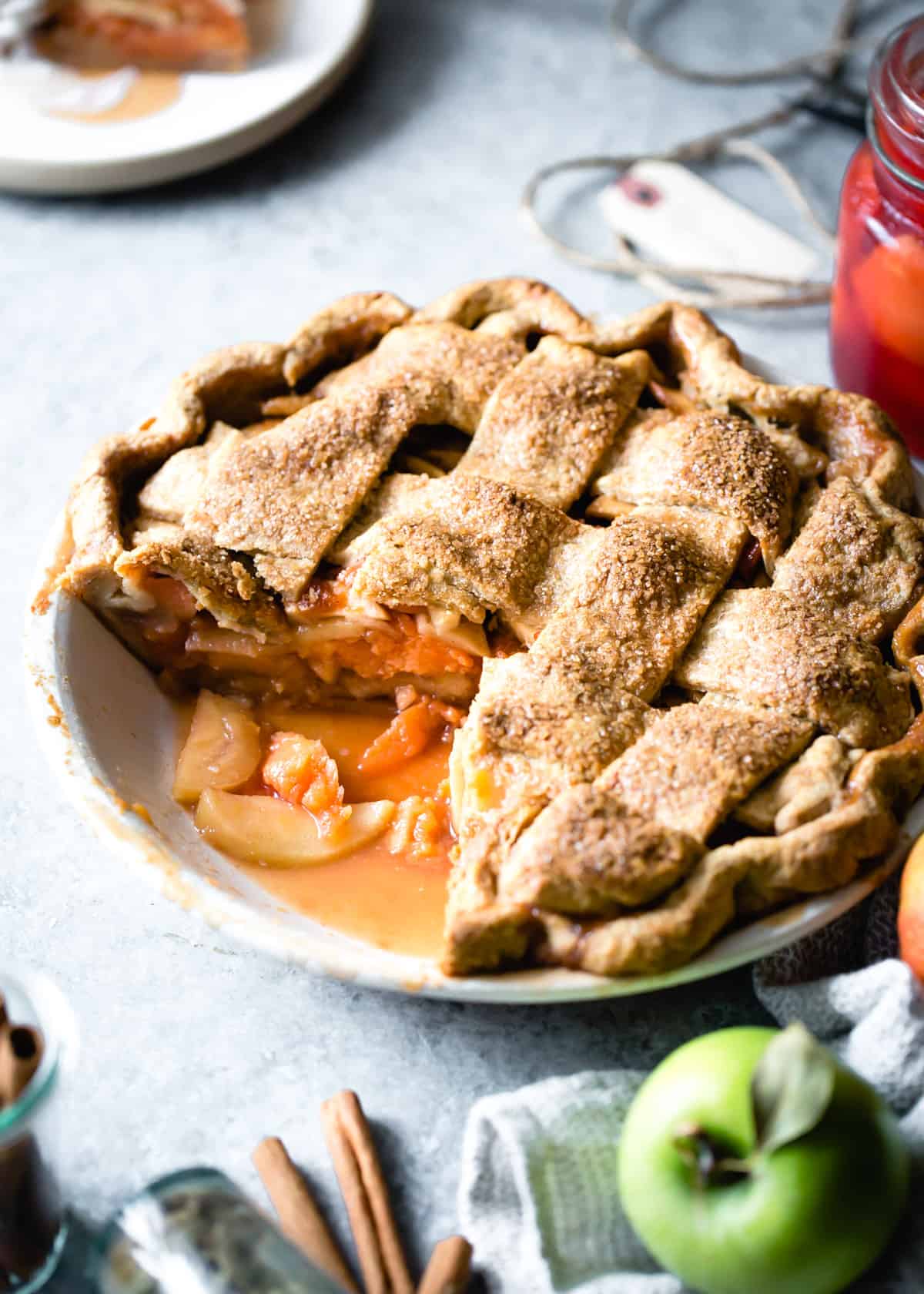 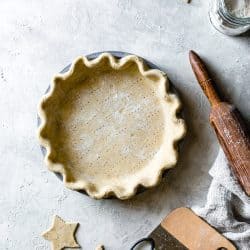 Print Recipe Pin Recipe
This dough is adapted from my book Alternative Baker: Reinventing Dessert with Gluten-Free Grains and Flours which is full of luscious pie recipes using this dough and its variations, including a vegan version. It's your ticket to crisp, tender, flaky pie dough loaded with whole grain oat and millet flours and free of gums. See variations below for doughs made with sorghum and buckwheat flours. The buttermilk variation makes for an extra flaky, rich dough that is easier to work with – highly recommended!
Alanna Taylor-Tobin
Prep Time: 20 minutes
Cook Time: 20 minutes
1 hour 10 minutes
Total: 1 hour 50 minutes
Servings: 9 servings (one 9-inch pie crust).

At this point you can do one of two things:

Variation with buttermilk (my favorite!):
Omit the vinegar. For the liquid in the recipe, stir together 4 tablespoons cold buttermilk with 4 tablespoons of ice water. Proceed with the recipe, adding more ice water if needed to moisten the dough after all the buttermilk mixture has been added. Variation with sorghum flour:
Omit the millet flour, using 1/4 cup (30 g) sorghum flour in its place. Variation with buckwheat flour:
Omit the millet flour, using 1/4 cup + 2 tablespoons (45 g) buckwheat flour and decreasing the oat flour to 1/4 cup (25 g). Vegan pie crust variation: Use vegan butter in place of the butter, and decrease the salt if the butter is salty. I like Miyoko's cultured vegan butter the best. Paleo pie crust variation: Instead of the flours, use 1/2 cup blanched almond flour, 1/2 cup cassava flour, and 1/4 cup tapioca flour. Omit the sugar or use maple sugar. Use 2 teaspoons lemon juice in place of the vinegar if you like, and decrease the ice water to 5-6 tablespoons, or until the dough holds together. If you're dairy-free, use vegan butter in place of the butter, and decrease the salt if the butter is salty. Variation in a food processor:
Once you've made this dough a few times by hand and have a feel for how it comes together, you can throw caution to the wind and make it in a food processor. Add all the dry ingredients to the bowl of the processor and scatter the butter slices over the top, but don't pulse them in yet. Place the bowl on the food processor, put the lid on, and open up the pouring spout. While pouring in the ice water mixture, pulse the processor in short bursts. By the time the liquid is added, the butter should be broken down into the size of peas. Give the dough a squeeze to make sure it's properly hydrated, pulsing in more ice water if needed. Wrap and chill the dough, making the turns if you like for extra flake. A few notes on ingredients:
This is the flour blend that works for me, but do feel free to experiment as you see fit. If you can't find sweet rice flour, which is widely available in Asian markets, try a GF all-purpose blend in its place, such as Bob's Red Mill 1 to 1 baking mix, which is made largely of sweet rice flour. (I would hesitate to substitute regular rice flour, which is less sticky and will make for a brittle dough). Chia seed can be found at any health food store or upscale market; I use the lighter colored seeds, grind a bunch ahead of time, and keep them in a jar to use as needed. If you can't find chia seeds, try using an equal amount of ground flax seed (these have a slightly stronger flavor), or 1/2 teaspoon xanthan or guar gum in their place. European-style butters have more fat and less water, and will make for the most rich and tender crust; Strauss and Plugra are two widely available brands. A few notes on timing:
If your dough has chilled for a while and cracks when you go to roll it, let it warm up a bit; this will make it easier to work with. Give yourself three hours to complete a parbaked crust if you plan to give your dough a puff pastry-esque turn (which I call roll, fold, roll), or two hours if you're skipping this step. Most of this time is inactive. The ideal timeframe for making this crust is as follows:
10 minutes to mix and fraisage the dough
30 minutes to chill 10 minutes to roll out and fold 30 minutes to chill
10 minutes to roll out the dough, get it in the pan, shape it, and dock it
20 minutes to chill
20 minutes to freeze
30-40 minutes to par-bake the crust Do ahead: You can make the dough up to two days ahead; let it soften up a bit before rolling it out. You can also wrap a frozen shell, baked or unbaked, for up to several months. Nutritional values are based on one of nine servings. 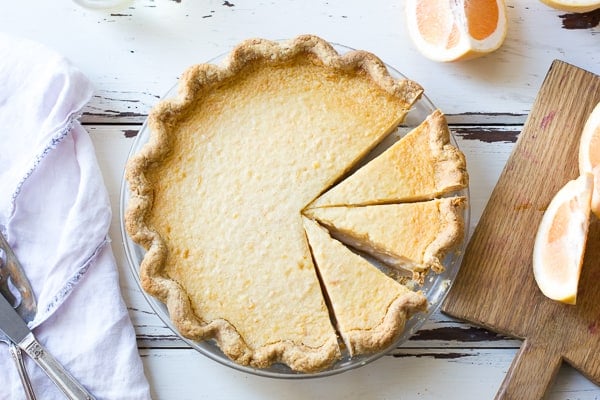 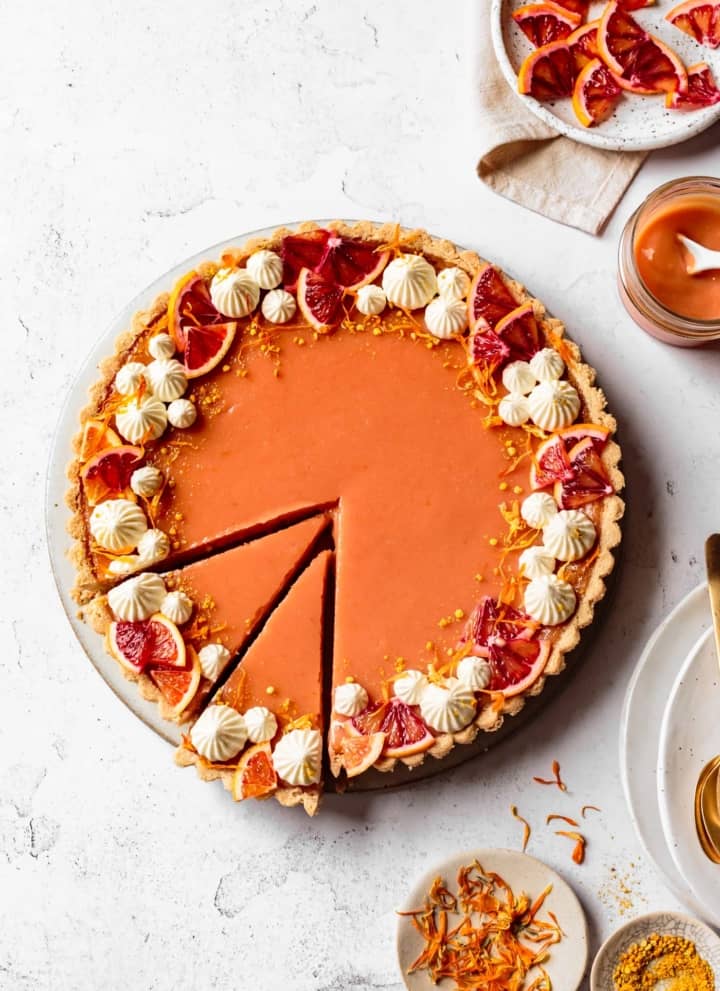 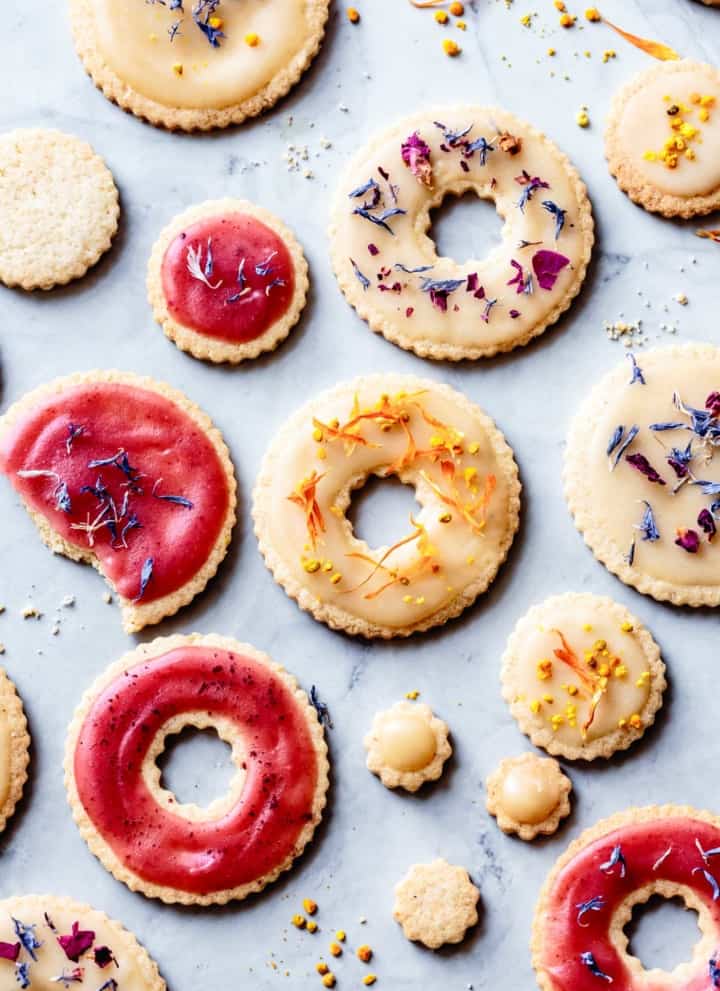