Gooey, maple-sweetened apples, tender almond flour pie crust, all kissed with a hint of cinnamon. This paleo apple pie tastes like fall on a plate. 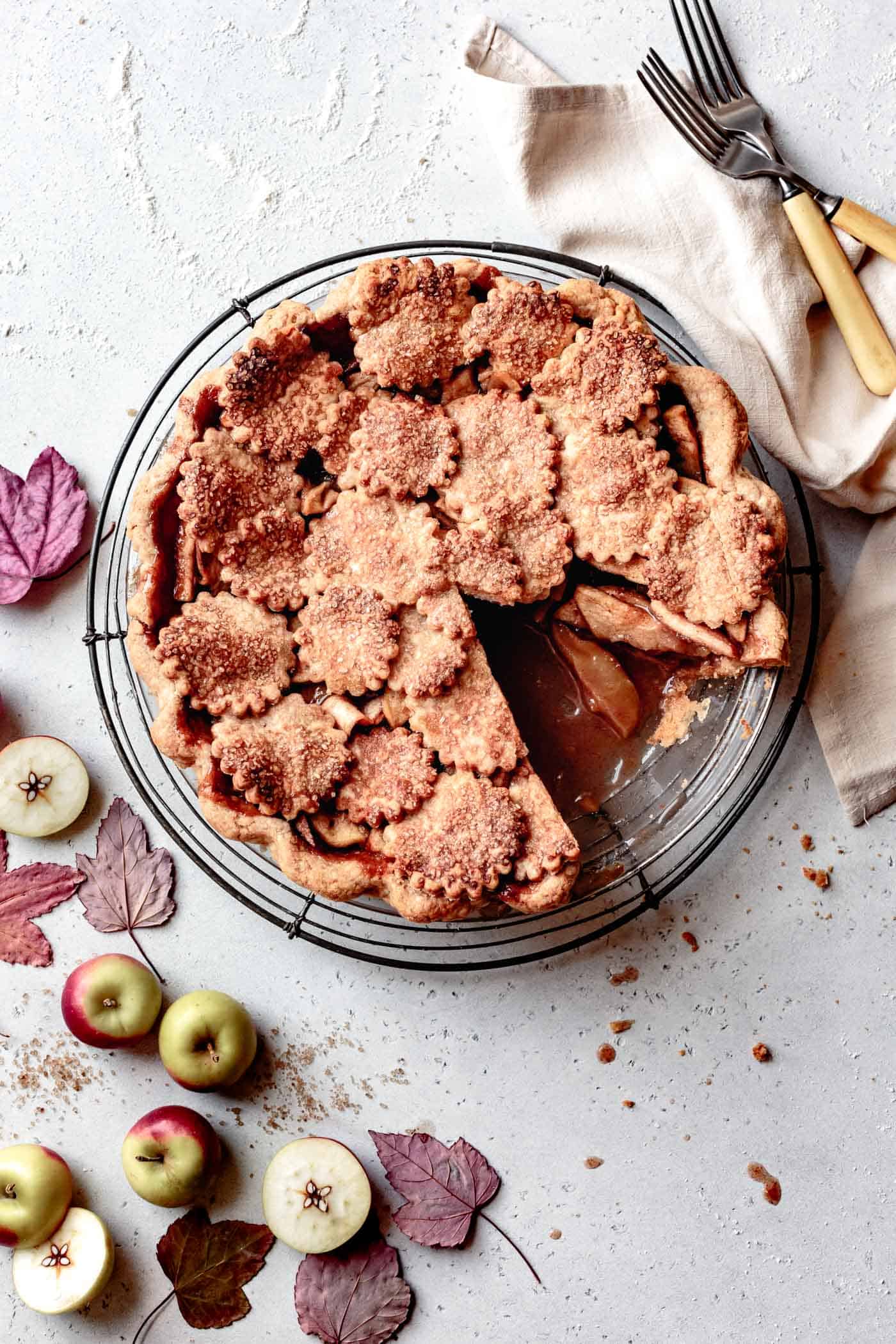 I recently invested in an electric blanket and let me tell you it's been life-changing. I keep it between the top sheet and the duvet, and turn it to medium 30 minutes before getting into bed when it's chilly. Slipping into a warm bed makes me feel instantly relaxed. I don't know how I ever slept in a cold bed before.

The smell of this paleo apple pie baking is just about as cozy as getting into a heated bed on a chilly fall night in San Francisco. As the buttery crust browns, juicy apples cook, and the whole kitchen smells like maple, spice, and all things nice. There's just something about the scent of apple desserts baking that smells unbearably delicious.

I'm calling this a "paleo apple pie" because I happened to use my new grain-free pie crust recipe to make it. Alternatively, tuck these apples into my favorite gluten-free pie crust if you're good with grains, or use my ultra-flaky wheat flour pie crust (or sourdough crust!) if gluten is your friend. For a gluten-free dairy-free apple pie, use a good vegan butter in any of the aforementioned crust recipes.

The tart apple filling gets sweetened with maple syrup and flavored with a dash of cinnamon, a bit of lemon, and a little salt. Top a slice with vanilla ice cream and revel in the flavors of fall. 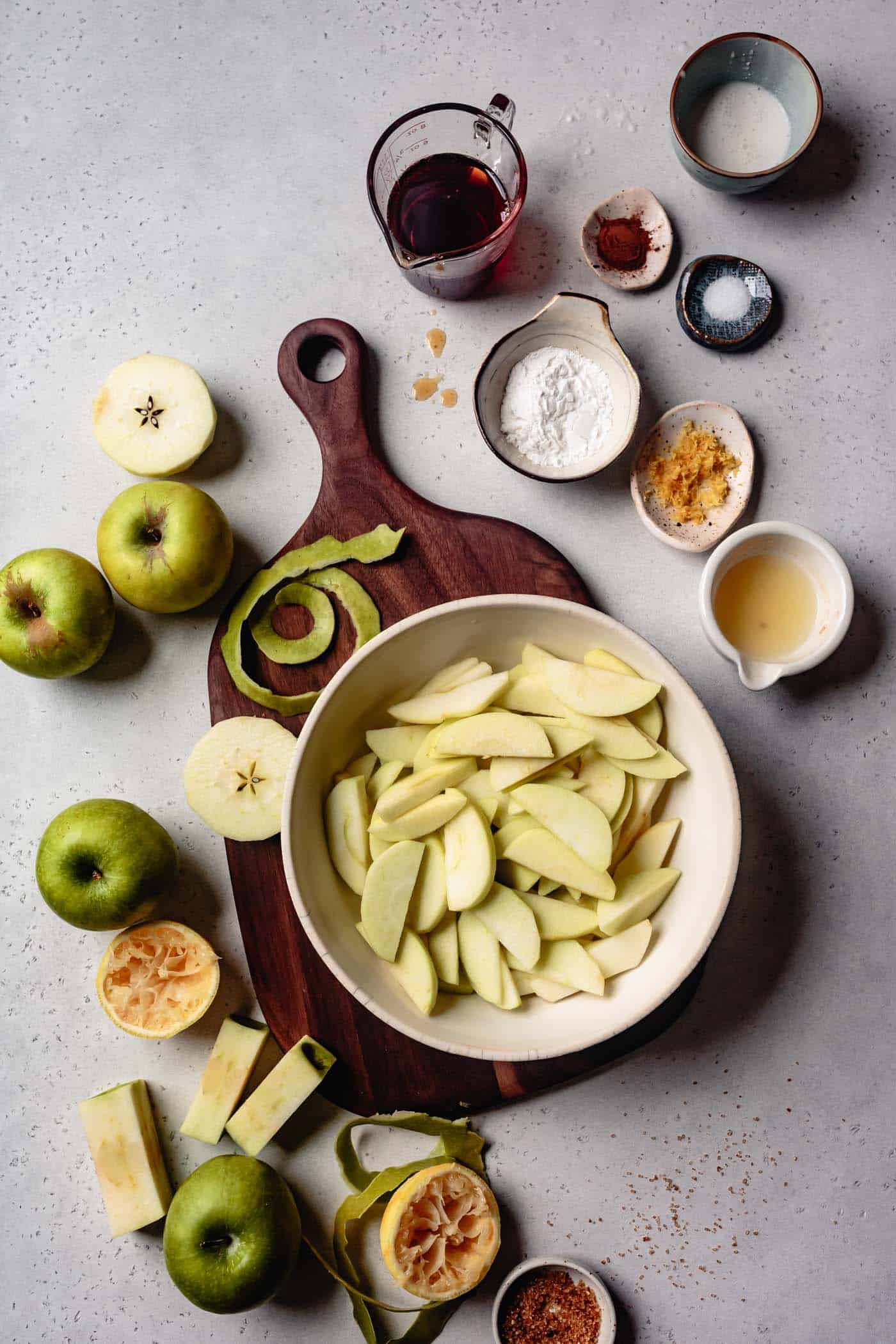 How to make paleo apple pie: step-by-step instructions and photos 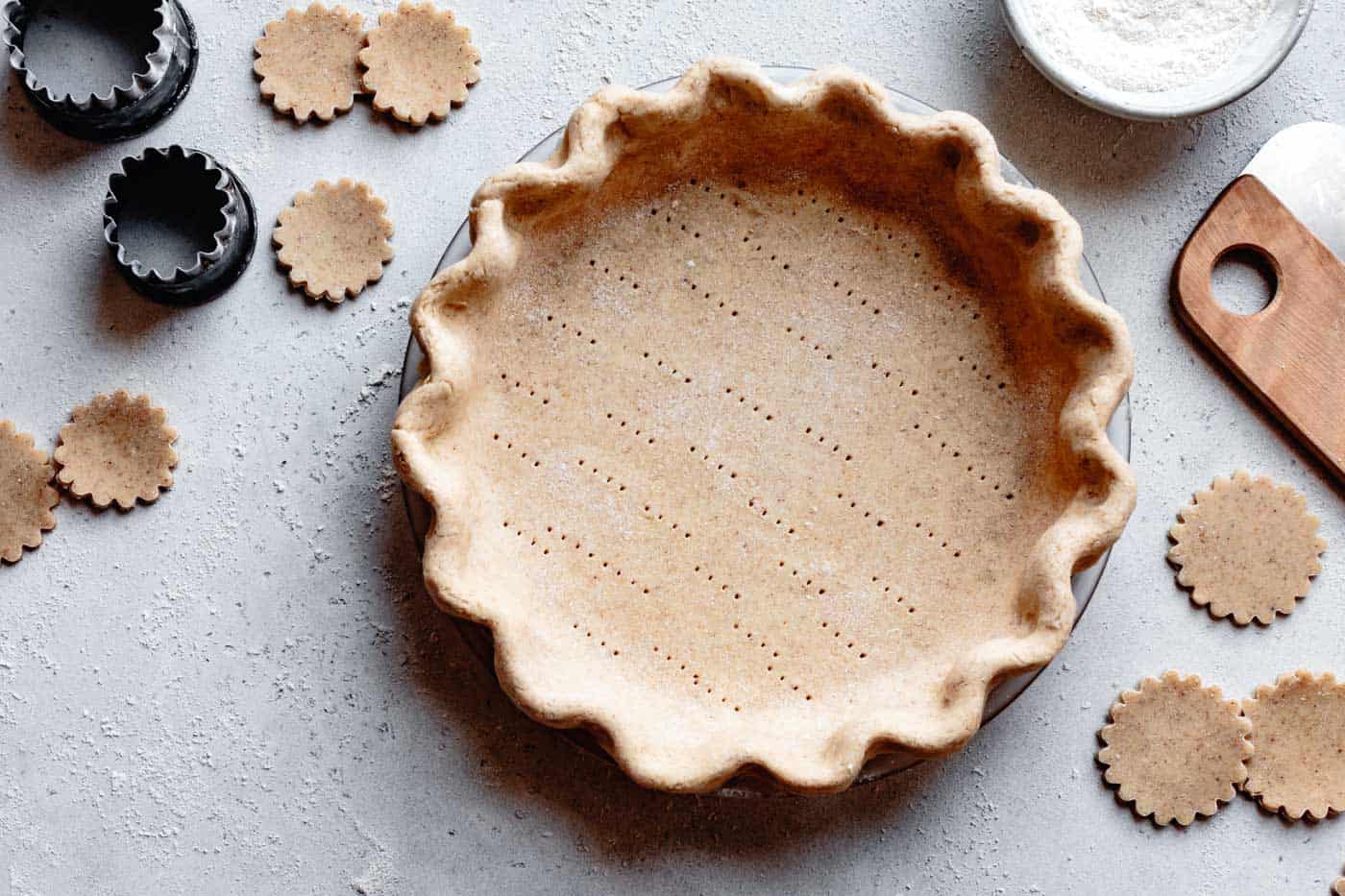 Step 1: Make a double batch of paleo pie crust dough. Shape half into a crust as instructed. 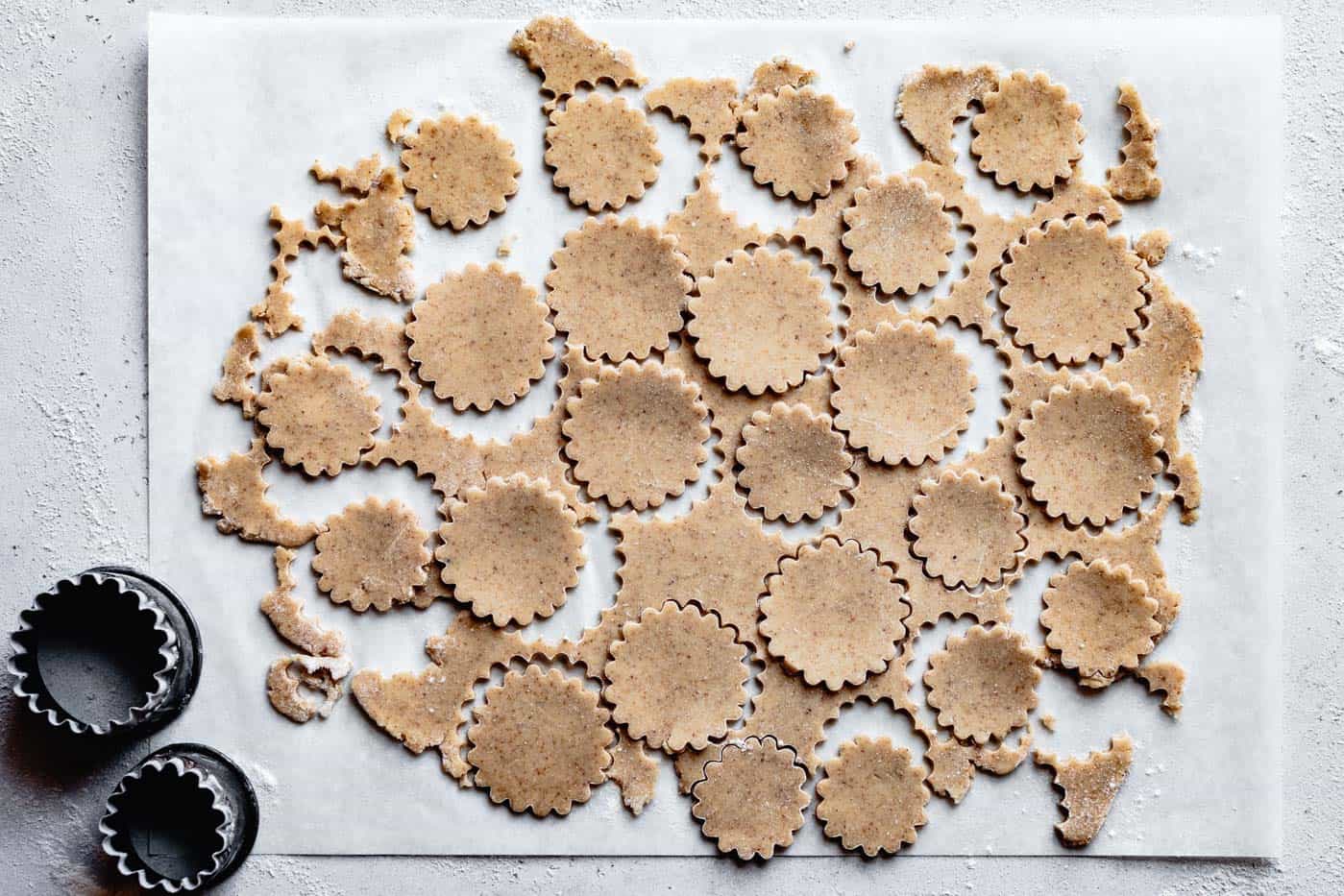 Step 2: Roll the other half of paleo pie crust dough to 1/4-inch thick and cut out shapes with a fluted biscuit cutter, small glass, or other cookie cutter. 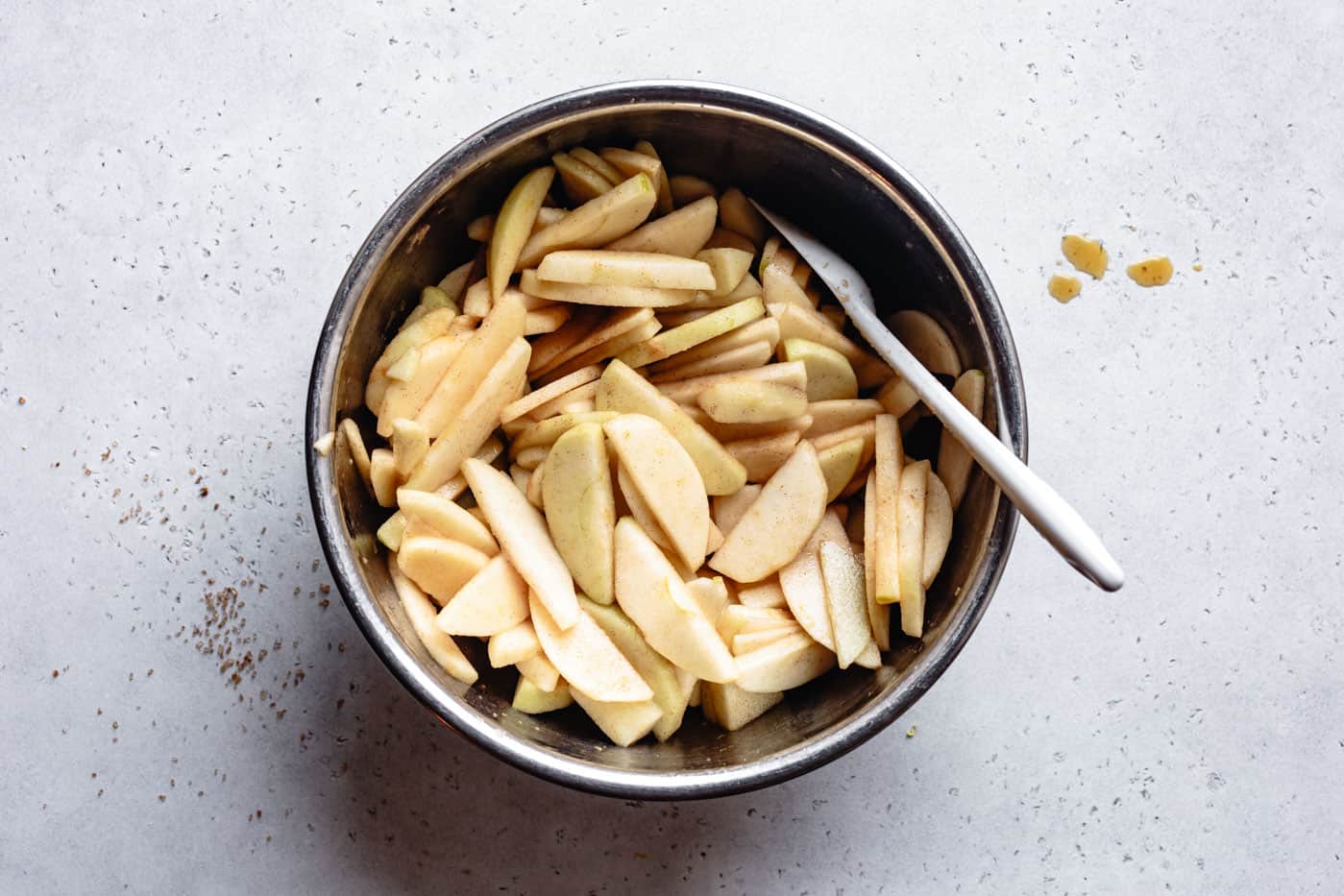 Step 3: Peel and slice the apples and toss them with the other filling ingredients. Let sit 10–20 minutes. This will make the apples easier to to pack into the pie crust. 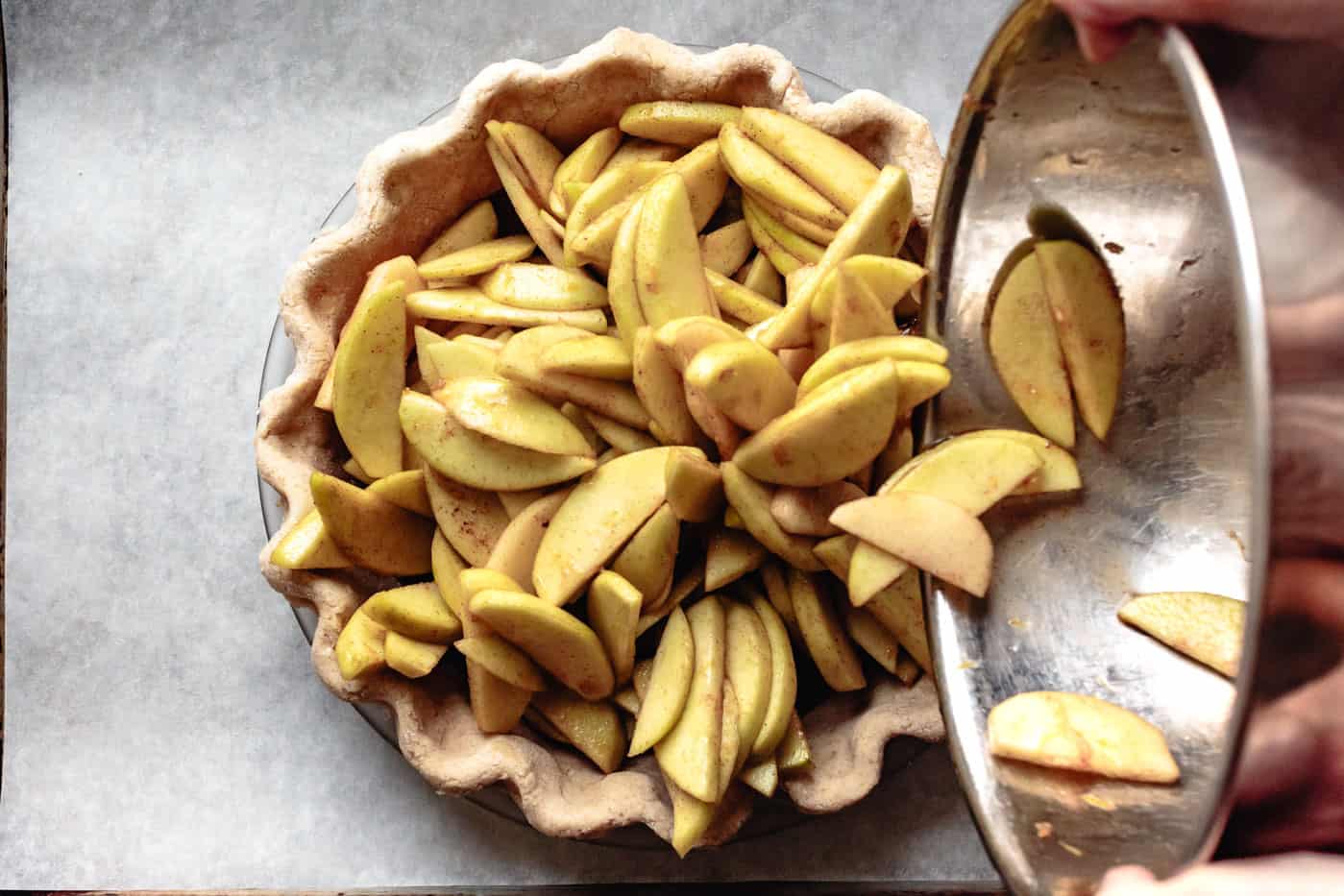 Step 4: Pour the apples and juices into the crust... 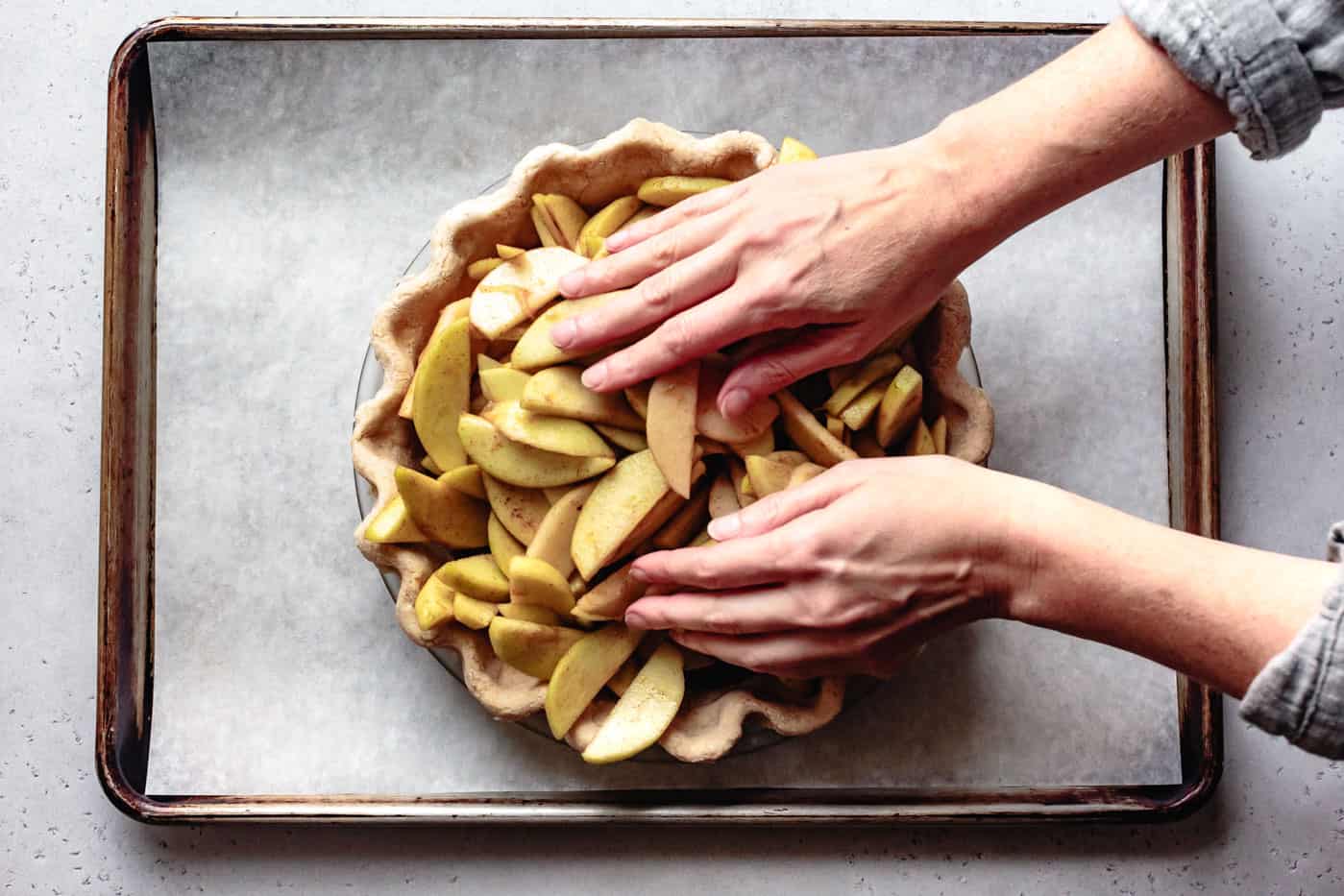 ...and use your hands to pack the apples down. 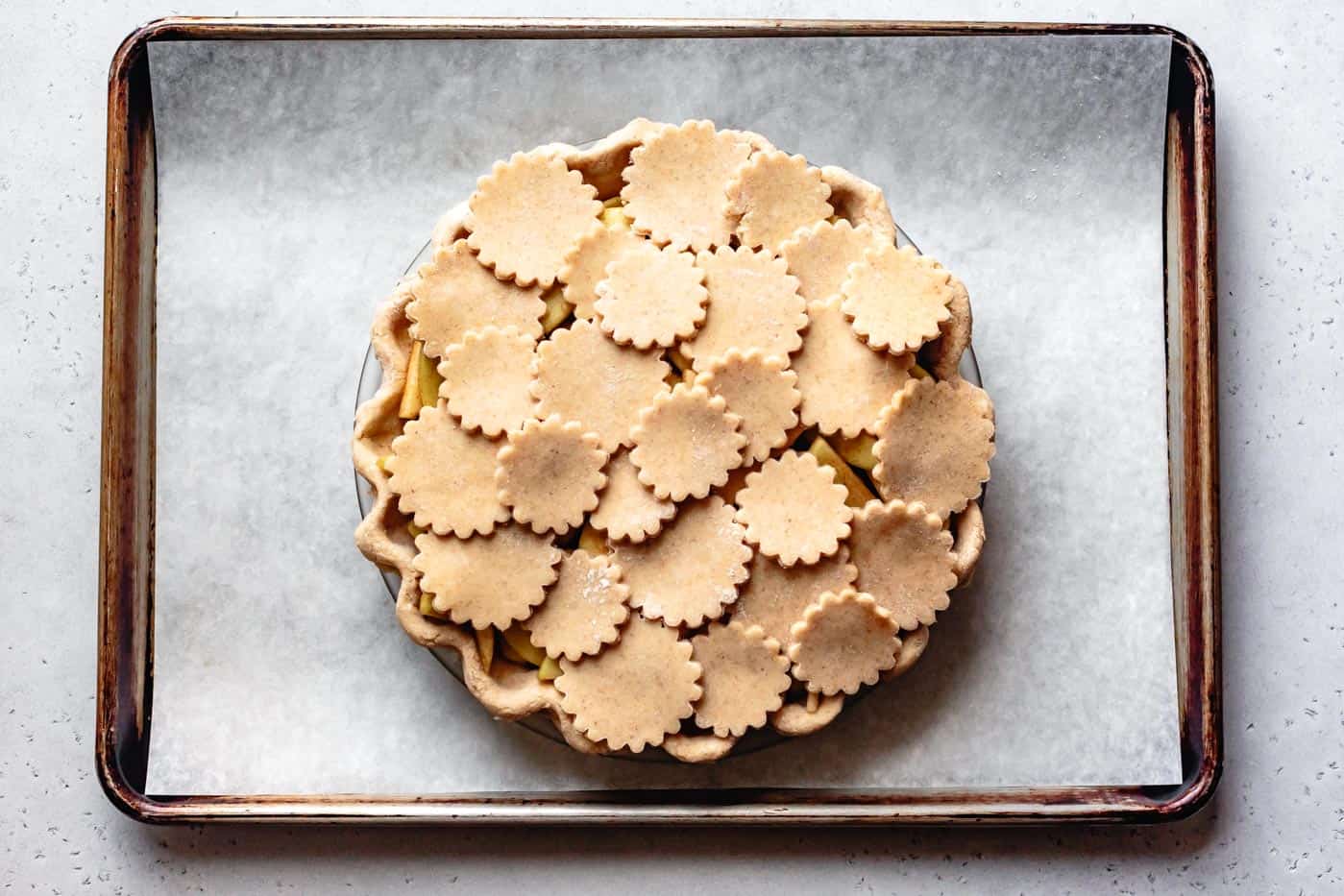 Step 5: Top the pie with the dough rounds... 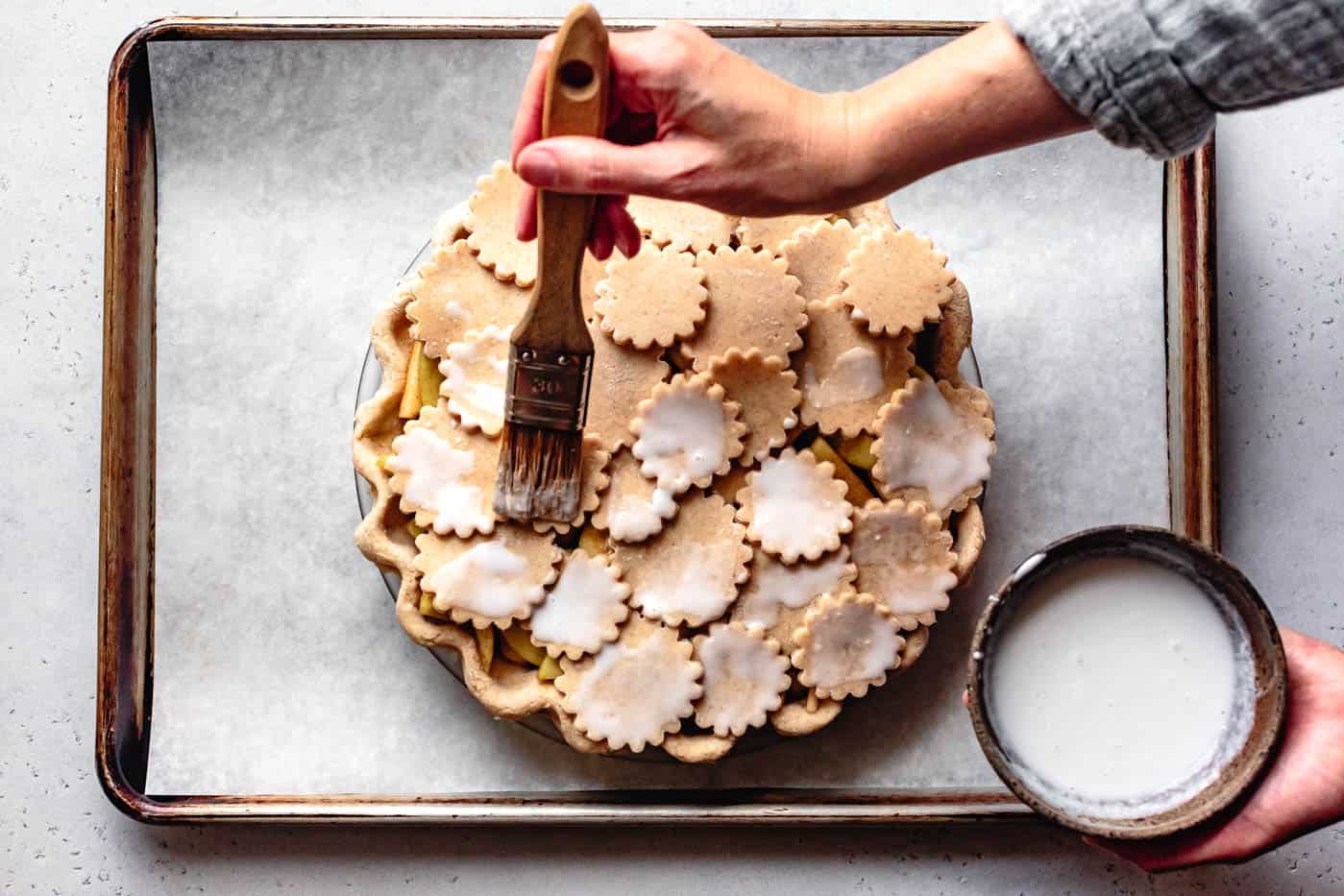 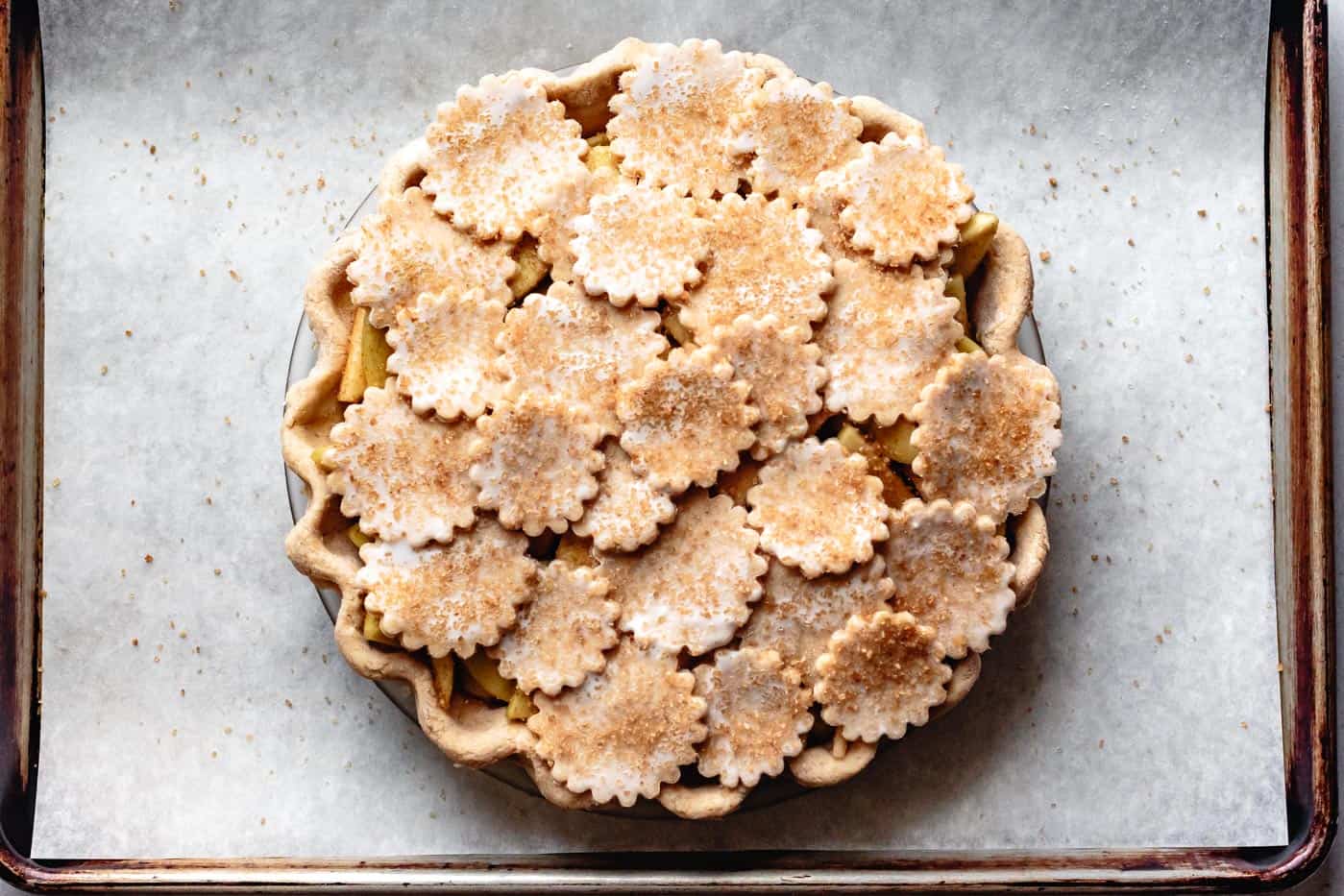 and sprinkle with sugar. 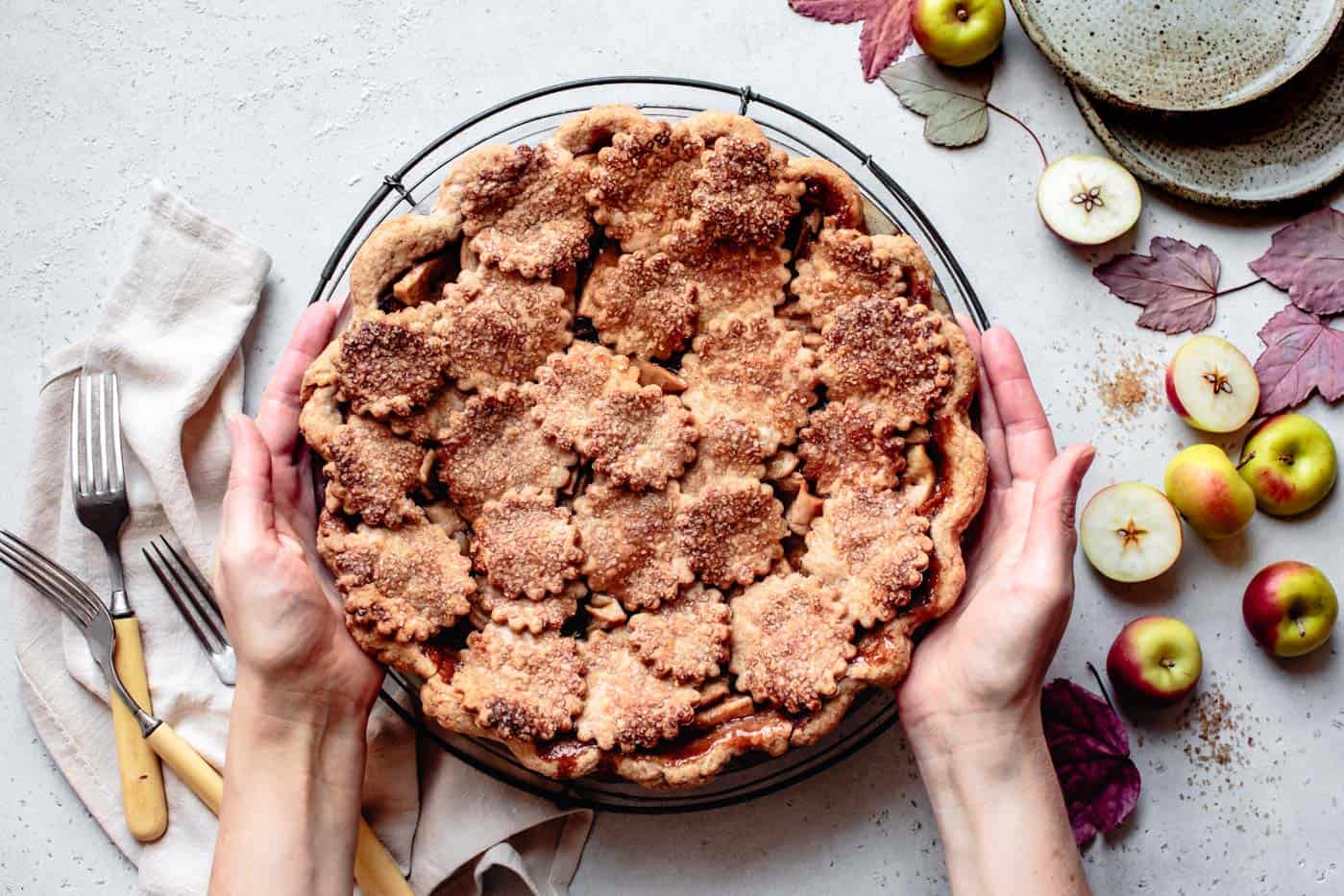 Step 6: Bake the pie until the crust is deep golden and the apples are bubbling vigorously. This pie likes a nice, long bake to really cook the apples. Let the pie cool for at least a couple of hours to firm up the filling. Use a sharp knife to cut the pie and serve with ice cream. 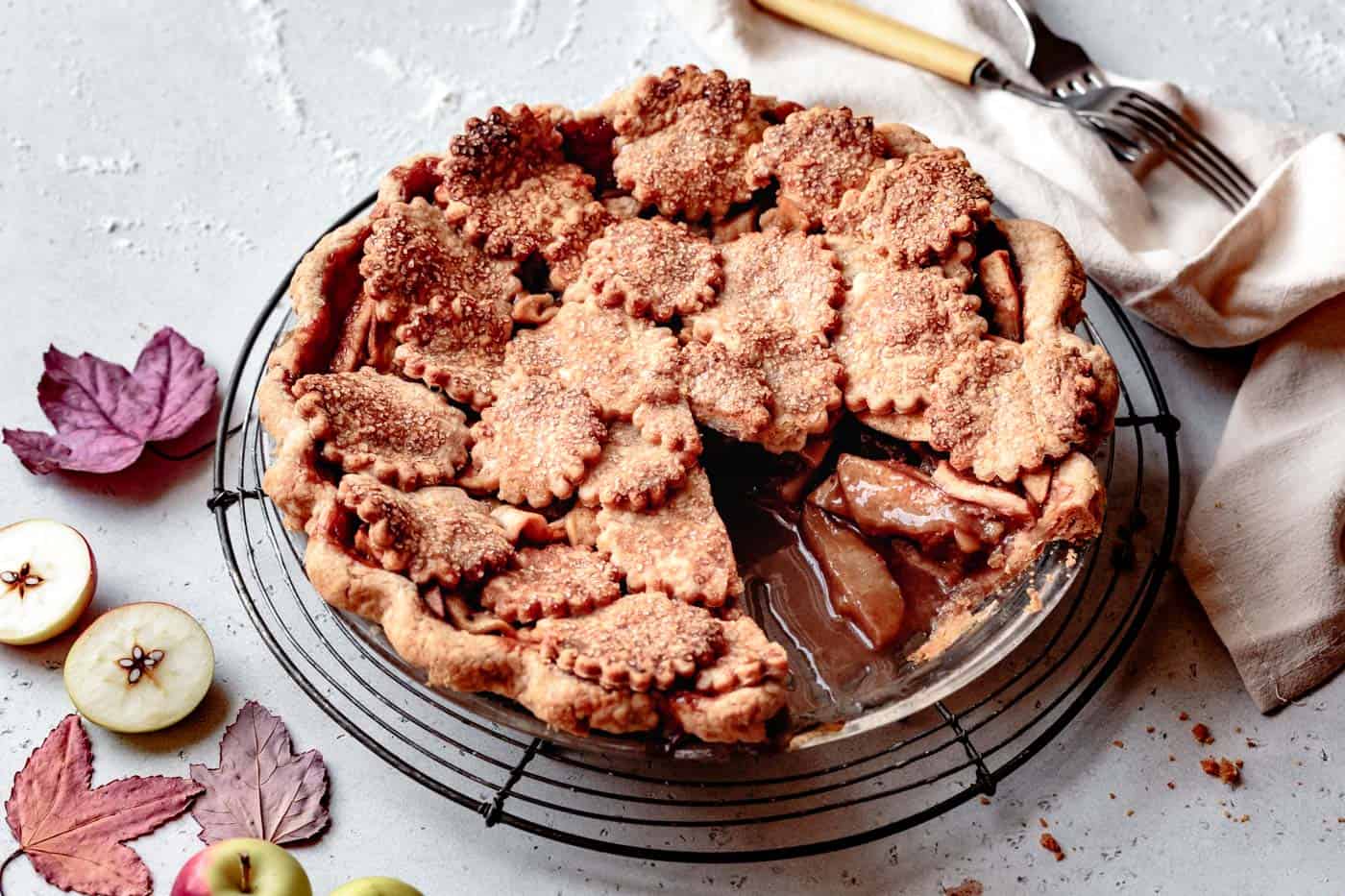 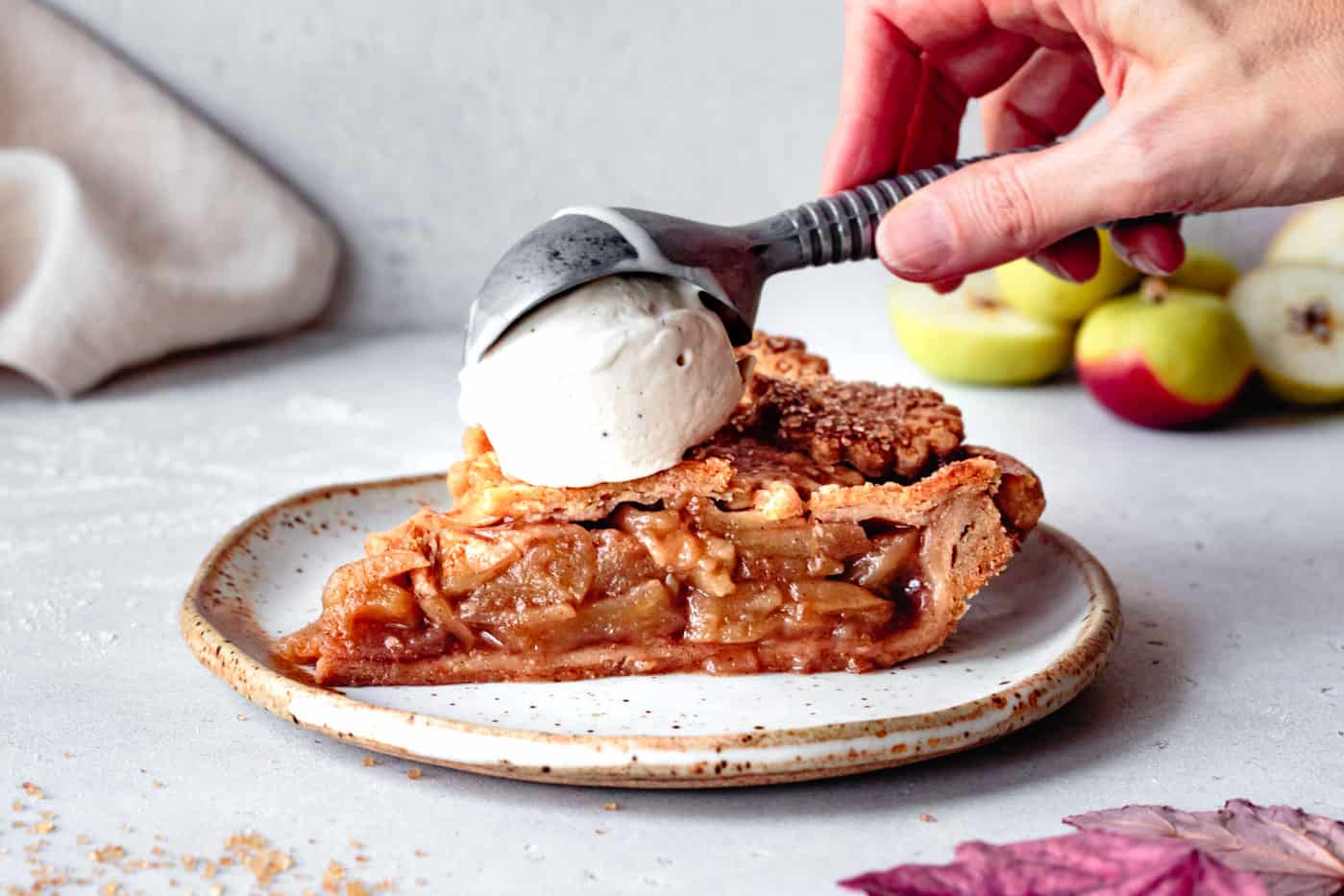 Bite into a slice of paleo apple pie and revel in cozy baked apples kissed with maple and cinnamon, all wrapped up in a tender crust you wouldn't know was grain-free. Don't skip a scoop of vanilla ice cream, dairy-free if you like. My current favorite paleo ice cream is Vixen Kitchen which comes from Santa Cruz, California. 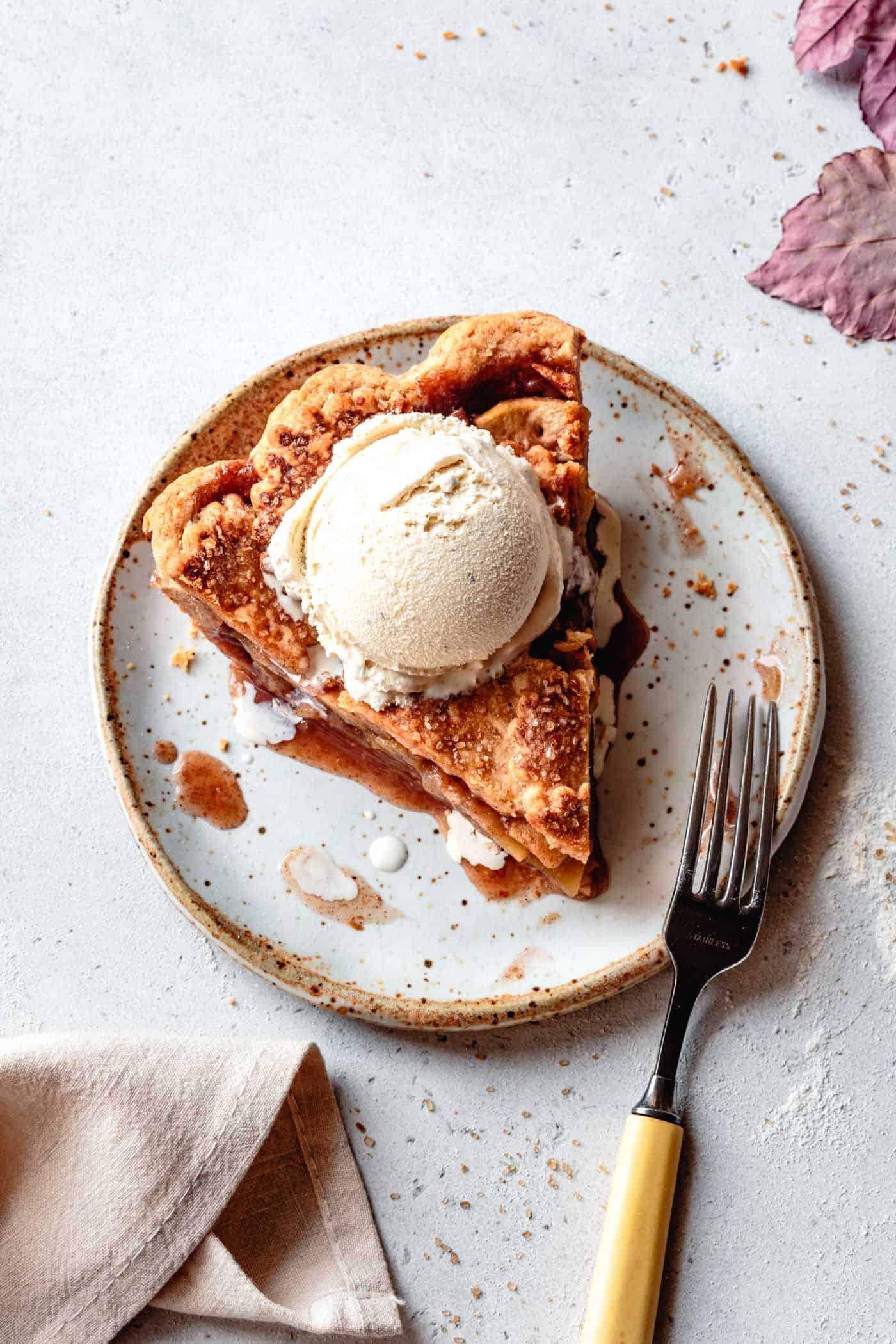 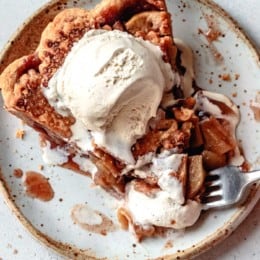 Do Ahead: The pie crust (bottom and top rounds) can both be made ahead, covered, and refrigerated for up to 1 day. The pie can be baked 1 day ahead and kept at cool room temperature until ready to serve. Extra pie can be frozen, but the crust will soften.  Crust options: I've made this pie with my paleo pie crust, but if you're good with grains try my flaky gluten-free pie crust or wheat flour pie crust (or sourdough!) instead.  Vegan & Nut-Free Options: Use a good vegan butter for any of the above crust recipes to make it vegan. The paleo pie crust recipe has almond flour in it by default, but I've listed nut-free alternatives in the recipe.  Nutrition values are for 1 of 8 servings. 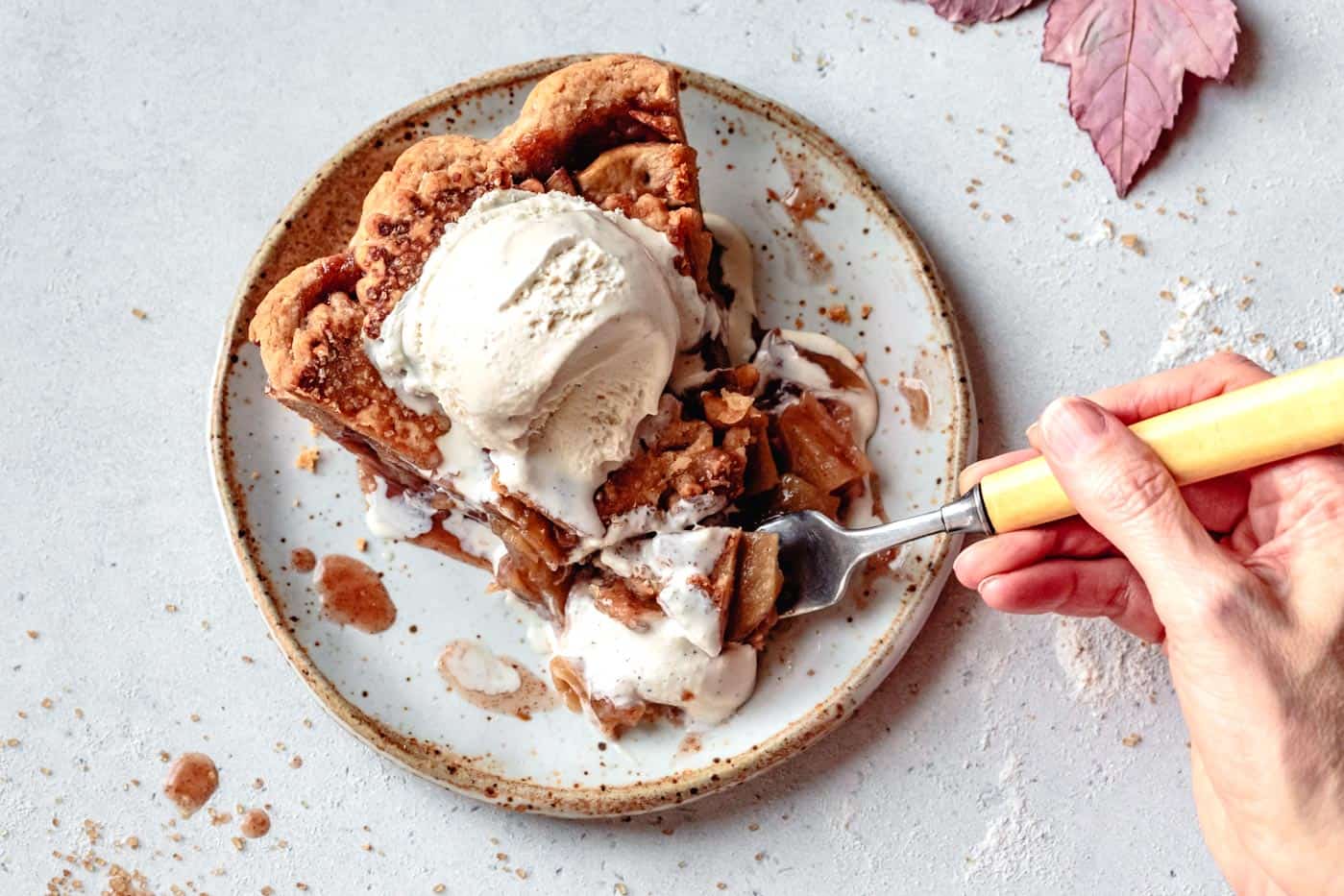