Use this grain-free pie crust in any pie recipe: pumpkin, apple, pecan, sweet potato - the pie's the limit. Thanks to Bob's Red Mill for sponsoring this post!

As a former pastry chef, I have strong opinions about pie crust: it needs to be buttery, flavorful, tender, and flaky or it isn't worth the effort.

Most paleo pie crust recipes use a single flour and they tend to turn out pale, crumbly crusts that don't feel or taste like the real deal. I set out to see whether I could make a paleo pie crust that rivaled my favorite gluten-free pie crust.

Using that recipe as a starting point, I tested three versions: one with all cassava flour, one with almond flour, and one with tiger nut flour. While all versions were good, the version made with cassava, almond, and tapioca flours was the clear winner. It tastes every bit as buttery and delicious as its wheaty counterpart.

This paleo pie crust recipe tastes and feels shockingly like a wheat flour dough. A few techniques borrowed from classical pastry create a smooth, pliable dough. The crust bakes up tender and flaky, just the thing to encase your favorite galette, quiche, pie, or tart.

PLUS! Sarah and I made a stop-motion video to show you exactly how to do it.

The key to this gorgeous grain-free pie crust lies not only in the blend of ingredients, but also in the method.

First, we make sure to hydrate the dough properly. Proper hydration helps activate the sticky qualities of the tapioca flour and chia seed to mimic gluten. This dough needs to feel slightly more moist than a wheat flour dough. When squeezed, it should easily come together, but it shouldn't feel wet or sticky.

Next we start with cold butter and we leave lots of nice butter chunks in the dough. There should be some chunks that are the size of large peas or small hazelnuts, with some butter worked into the dough.

After the first chill, we give the dough a couple of "turns" meaning we roll it out and fold it up. This technique is traditionally used to make puff pastry and croissants. In fact, this paleo pie crust recipe is similar to a "rough puff pastry." As the dough is rolled out, the butter chunks elongate into sheets. When we fold up those sheets, we get many thin layers of butter and dough. When the cold dough hits the hot oven, the butter gives off steam which lifts the layer of dough above it.

If the butter gets worked into the dough more, the resulting crust will be more tender and soft, while more large chunks of butter make a crisper, flakier dough.

How to make paleo pie crust: step-by-step photos and instructions

Omit the almond flour and use either all cassava flour, or tiger nut flour (also made from a tuber and not a nut) in its place. Sub by weight if you can, and add 1-2 more tablespoons of ice water as needed to bring the dough together. This version doesn't brown as nicely as the version with almond flour, but it gets the job done!

For a paleo vegan pie crust, swap in a good plant-based butter for the dairy butter. Miyoko's butter is the closest I've found to dairy butter in terms of flavor, firmness, and workability. Alternatively you can try this with chilled coconut oil or palm oil. These oils are more solid when chilled, so you'll want to let the dough soften up more before rolling it out. Omnivores can try this with lard. You can also use 50/50 butter and lard or shortening.

You can use a double batch of this paleo pie crust dough to make a double pie crust, lattice crust, or cut-out crust, as shown here. The cut-out version, which I learned from Laura of Tutti Dolci, is my favorite and the method that graces the cover of my cookbook. This easy paleo pie crust method uses rounds of cut dough to form a pretty tiled top. You can cut the rounds into any shape you like: rounds, fluted rounds, stars, hearts, leaves, squares – the options are limitless. Overlap the shapes atop the filled crust, leaving some windows for steam to escape. Gently brush and dab the top with plant milk and sprinkle with a little coarse sugar or maple sugar.

Use this almond flour pie crust with any pie, galette, or quiche recipes you like. Try my recipe for paleo apple pie, sweetened with maple syrup and kissed with cinnamon and lemon. Or use my favorite pumpkin pie recipe with coconut milk swapped in for the dairy for a paleo pumpkin pie.

I hope this post was ins-PIE-ring! Please let me know what you make with it in the comments. 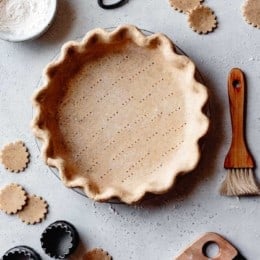 Turning the dough: If turning the dough (rolling it out and folding if up) intimidates you, you can skip this step. The dough will be more fragile to work with and more brittle when baked, but it will still be tastier than many of the paleo pie crusts out there! You can also do just one turn if you're pressed for time. Or if you work really fast and keep your dough cold, you can do both turns in one go.  Timing this recipe:   Give yourself three or four hours to complete a parbaked crust; most of this time is inactive. The ideal timeframe for making this crust is as follows: Tip: If you have the space, it's fine to leave your counter floury between the three times you need to roll out the dough. Do-ahead: Nutritional values are based on one of nine servings.