The best maple bourbon pecan pie! Salty-sweet with a boozy punch and loads of toasted pecans. No corn syrup required!

Several years ago, when I was slightly less bojon and worked as a barista at Farley's, I used to treat myself to the occasional massage by the brutal thumbs of Helen Hickman. Helen's massages were a masochist's dream of the deep tissue variety, more excruciating than relaxing, but I always knew they would make me feel better in the long run.

One day, Helen gave me something that was excruciating in a different way: a large bag brimming with pecans still in their shell, a gift from her aunt in Texas. While the nuts weren't nearly as heinous to peel as chestnuts, they did take a long time to exorcise from their shells. When I was done, I didn't want to waste them on just any baked good, I wanted to really showcase their freshness. So I baked them into a bourbon pecan pie, adapted from a recipe in Cook's Country, Cook's Illustrated's sister magazine. That pie was excellent, and I have gradually tweaked the recipe to its current configurations.

Pecan pie is notoriously sweet. The base is essentially a custard made with sugar, rather than milk or cream, and eggs and butter. Some recipes cut the sweetness of pecan pie with corn syrup, kumquats, coffee or citrus zest. But this recipe deals with the excess sugar by adding generous doses of salt and bourbon.

I substitute maple syrup for the corn syrup because corn syrup scares me. It is heavily processed and doesn't taste very interesting, whereas grade B maple syrup, which is minimally processed, retains some healthy trace minerals and tastes like heaven flowing from a tree. The maple has the added benefit of giving this pie an even softer set.

Bourbon's spicy-tart flavor blends beautifully with earthy maple and rich nuts, and two applications of salt – fine salt in the custard and a sprinkle of flaky salt on top – make this pie as addictive as bourbon is to some. The ample amount of bittersweet molasses in organic dark brown sugar adds complexity.

A few unconventional techniques result in a sublime pie true to Cook's perfectionism. First, the well-toasted pecan halves are broken up with one's fingers, rather than chopped with a knife. This only takes a minute or two longer than chopping (unless you're making 20 pies) and it results in more even pieces and less dust, which would muddy the custard. Next, the custard is warmed in a saucepan. This allows the pie a shorter baking time, and it also helps eliminate the froth that gets churned up when whisking in the eggs. Like Cook's pumpkin pie, the warm custard goes into a warm pie shell, shortening the baking time and helping the crust stay crisp. The custard bakes up clear and creamy, and softly set, the texture of a fine crème brulée, with a thick layer of toasty, almost candied nuts on top. The whole-grain crust flakes and shatters against the smooth filling.

Even with these few extra steps, pecan pie is an easy pie to make. You don't have the potential sogginess of a fruit pie, or the long baking time (vegetables, then pie) of a sweet potato or pumpkin pie. If you're pie-phobic, this would be an excellent and forgiving one to start with. And if you're not pie-phobic, you should also make this pie. Because it is amazingly tasty.

If you don't have the wherewithal to shell your own pecans, just make sure you start with fresh, raw pecan halves. You don't even need to have Helen's burly thumbs to easily break them up.

But it wouldn't hurt. 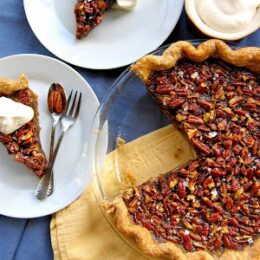 Inspired by Cook's Country's Bourbon Pecan Pie. For the best flavor, use fresh, raw pecan halves (rather than pieces) and toast them yourself while the pie dough chills. Breaking up the nuts with your fingers, rather than chopping them, gives you more regular pieces and creates less dust, leaving the custard clear and smooth. Be sure to toast the nuts thoroughly or they will taste bland and soggy in the finished pie. On that note, be sure to par-bake the crust until it is almost fully baked, as it doesn't cook much after the filling is added; it should be golden and dry all over. Organic dark brown sugar contains more molasses than the conventional stuff and is highly recommended. Grade B maple syrup counter-intuitively has a deeper color and flavor than grade A; use it. This is a boozy pie, not for children, expecting mothers or recovering alcoholics. For a milder bourbon bite, omit the 2 tablespoons of bourbon that are added at the end. I used Bulleit bourbon, but I've also made this pie with Jack Daniel's with great results; I'm guessing that any decent bourbon will make a tasty pie. Unsweetened whipped cream makes a fine foil to this pie; though a slice of warm pie with a scoop of vanilla or coffee ice cream would be sublime, too. This pie needs to cool at room temperature for 3 hours post-baking. For the cleanest cuts, chill the pie after it has completely cooled, cut slices, and then let the slices sit at room temperature for 20 minutes, or warm them briefly in a 300º oven. Nutritional values are based on one of ten servings.