A double dose of sorghum makes this gluten free bourbon pecan pie shine; no corn syrup needed! Sorghum syrup gives the filling silky body and a complex taste, while the crust gets extra flake and flavor from sorghum flour. 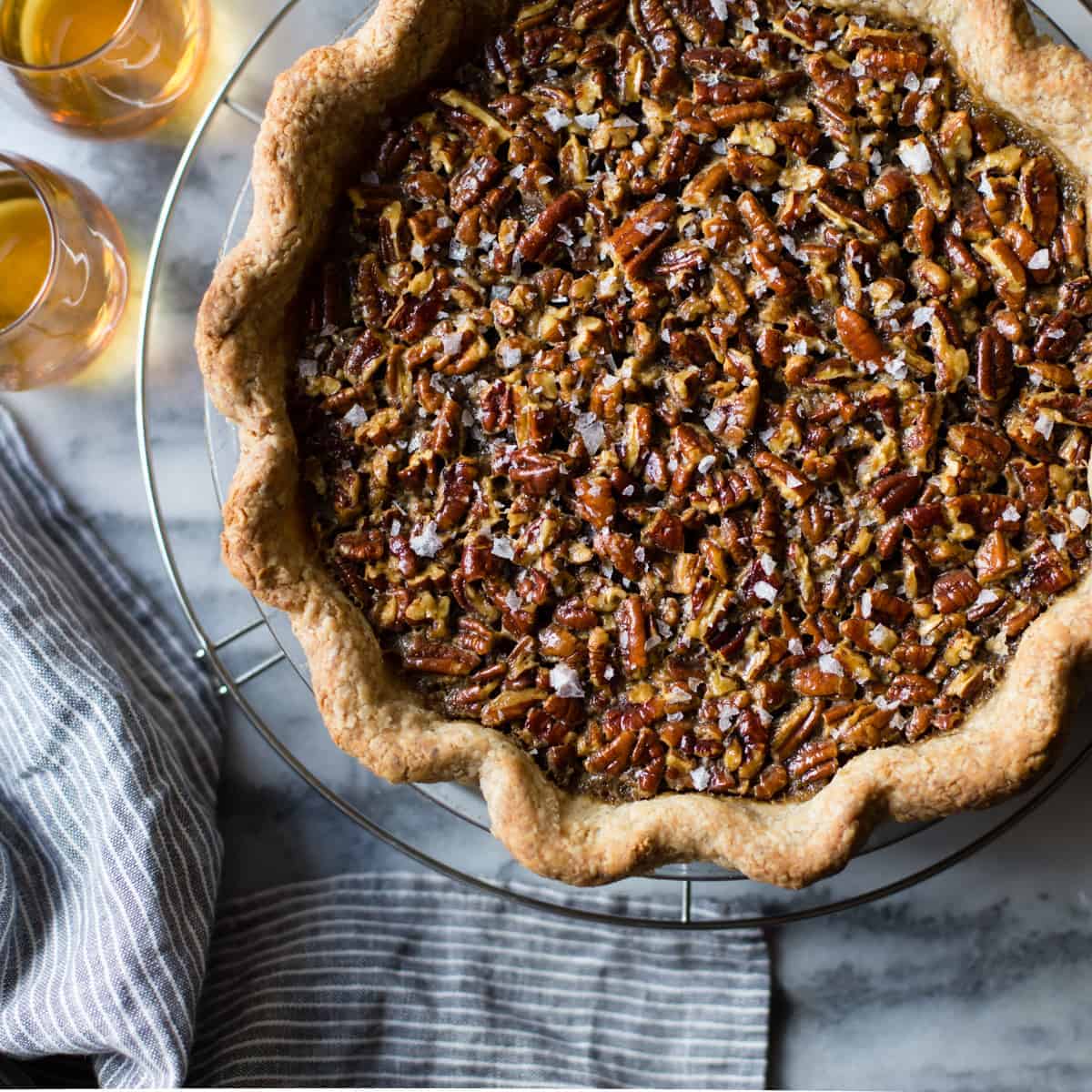 This pie was a bit of a happy accident. Sarah and I were styling a bourbon pecan pie for NYT that called for dark and light corn syrup. After failing to locate dark corn syrup at two different stores, I panicked and grabbed a jar of sorghum syrup, figuring that the color and viscosity would look similar enough for pictures. (Don't tell.) 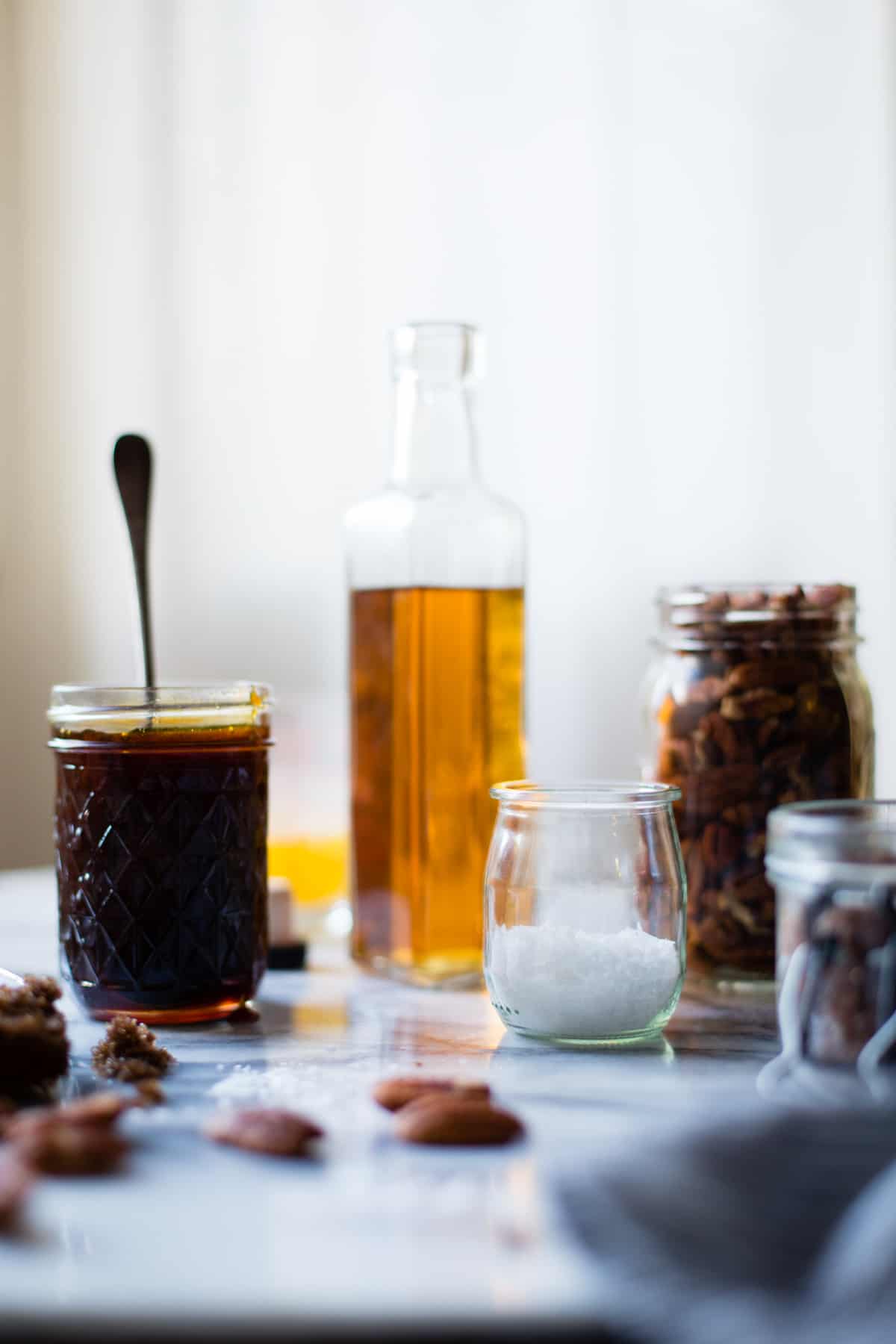 I'd been curious to try sorghum syrup (also called sorghum molasses) after reading about it in The Homemade Flour Cookbook and Flavor Flours, and it did not disappoint. I cracked open the jar, dipped a finger in, and tasted. The flavor was like heaven opening up and angels singing: notes of butterscotch, molasses and maple in a thick, not-too-sweet syrup. 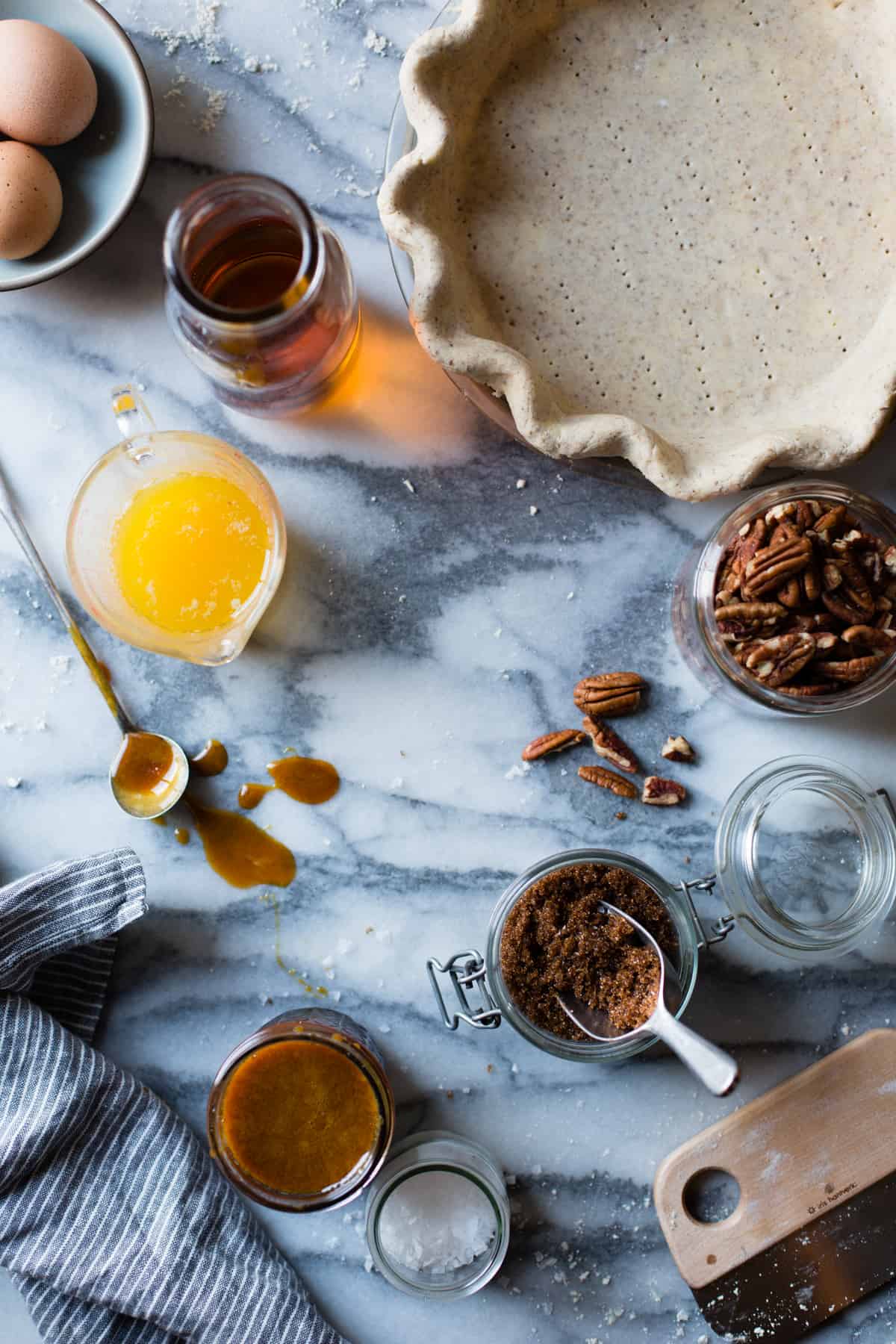 Sorghum syrup is made by boiling the juice from the stalks of the sorghum plant. The resulting liquid is thick, like honey, with a deep brown coffee color. It's less sweet than honey or maple syrup, with a level of sweetness similar to brown rice syrup or corn syrup. But it's got loads more flavor than either, making it ideal for use in pecan pie, which can be overly sweet and bland. Turns out this idea is not new, and now we know why. (Sorghum syrup is also said to be high in antioxidants, hence this pie = health food. It's basically kale.) 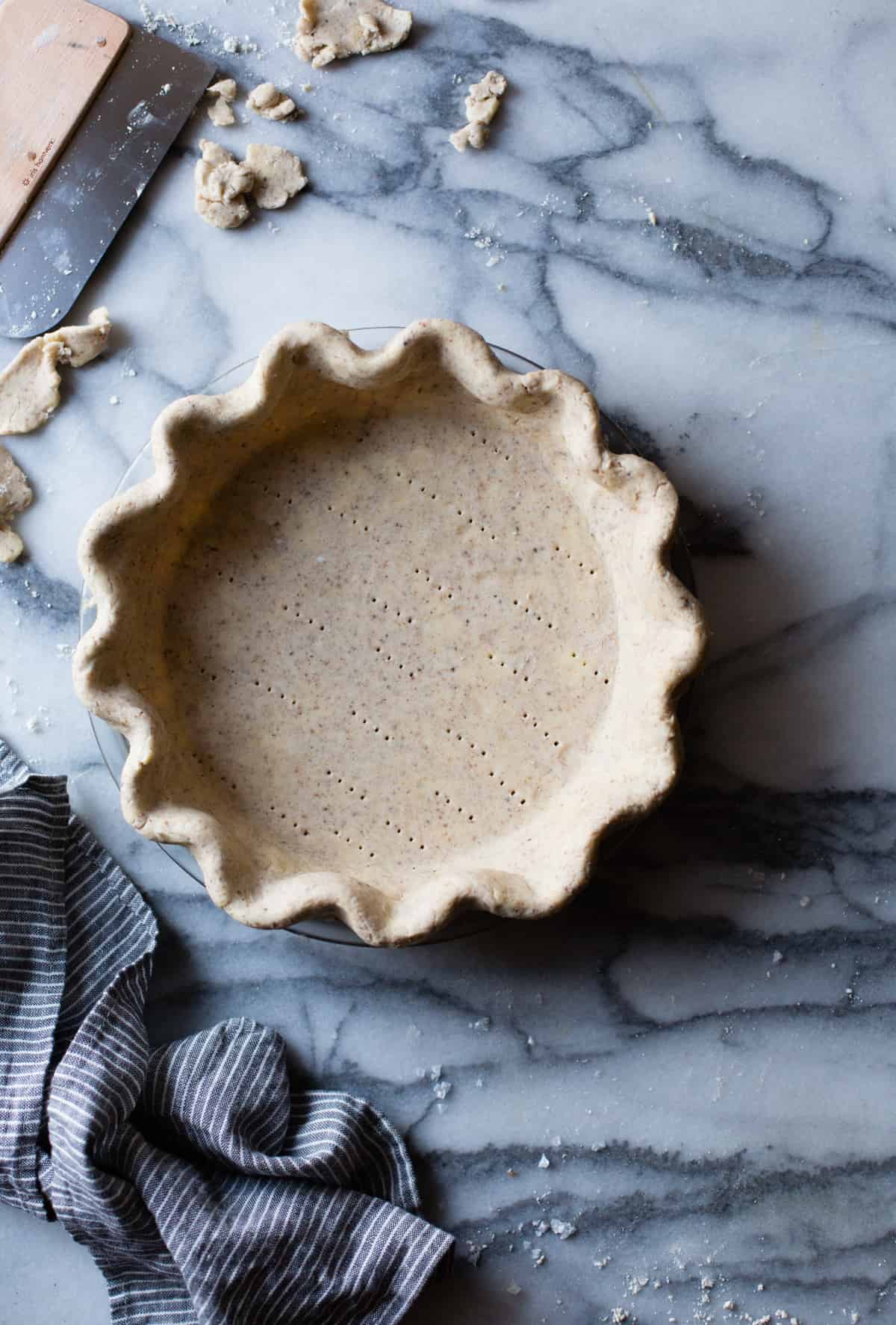 The pie baked up beautifully and we had fun styling the shoot for photographer Craig Lee. Then we ate too much pie. For weeks, I could not stop thinking about that pie. I imagined swapping the maple syrup in my favorite (though poorly-photographed on a smart phone because I had recently dropped my camera in breakfast) pecan pie recipe for sorghum syrup, and the millet flour in my pie crust for sorghum flour. And it turns out I wasn't alone: Sarah was hatching a similar sorghum-y plan! So we decided to have a little pecan pie party today. Check out Sarah's delectable version, kissed with molasses and orange zest and topped with nutmeg whipped cream, here. 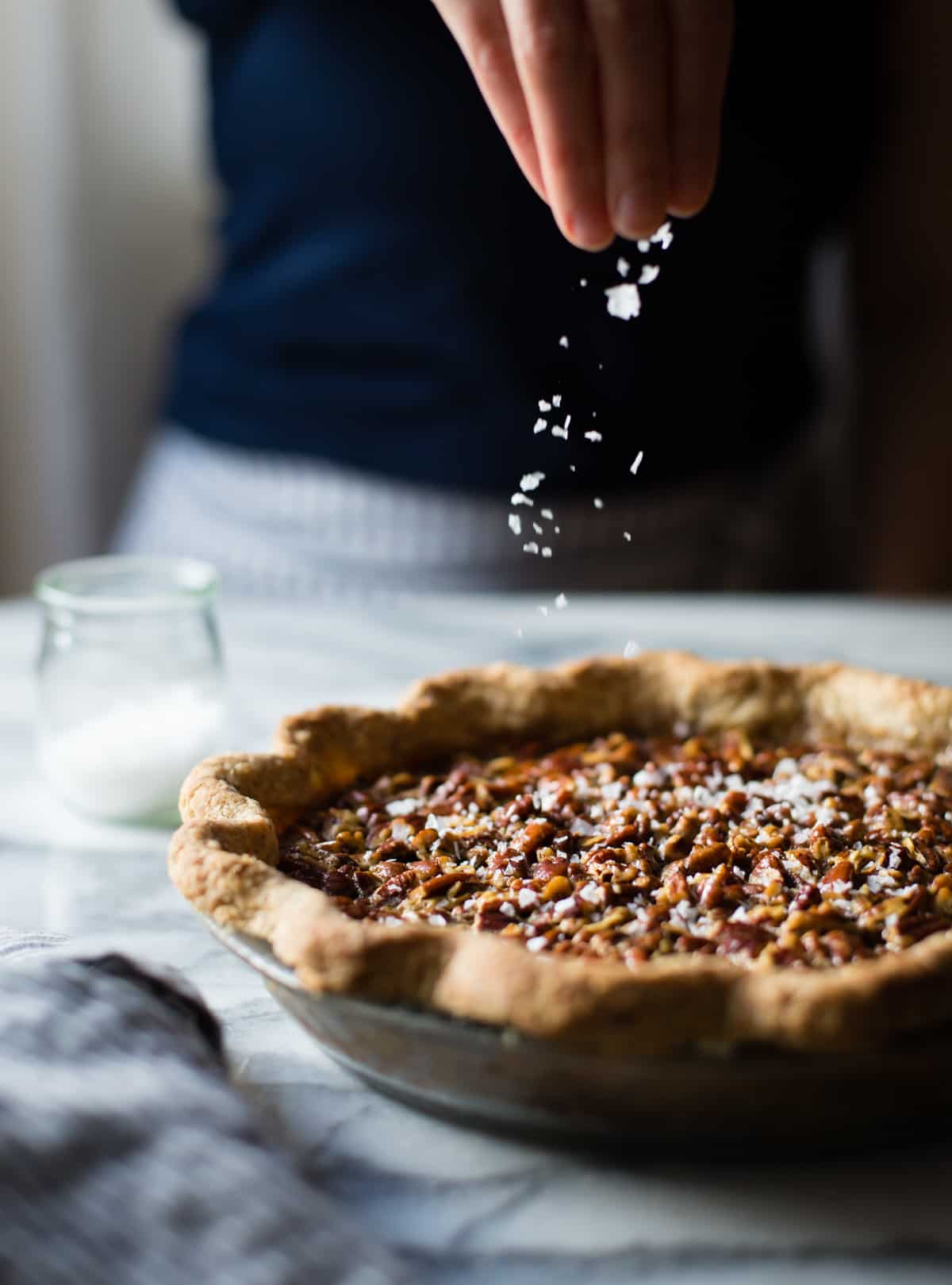 This pie uses a few key techniques courtesy of Cook's Country, from whence it was adapted, to turn out a custardy filling crowned with toasty nuts in a crisp crust. First, parbaking the crust is a must, since the custard likes to bake at a low temperature to keep it from curdling, whereas the crust likes hot temperatures to make it brown and flake. I like to use a baking stone to get the bottom of the crust extra-crisp. Next, the pecans are given a thorough toasting, then broken up with your fingers, which yields less dust to pollute the filling, keeping it crystal clear. The custard is given a brief cook on the stove, just enough to warm it up, dissolve the sugar, and oust any frothy air bubbles that can mar the surface of the pie. The pie is baked fairly briefly in a low oven to barely set the custard, then given a long cooling period to firm it up. 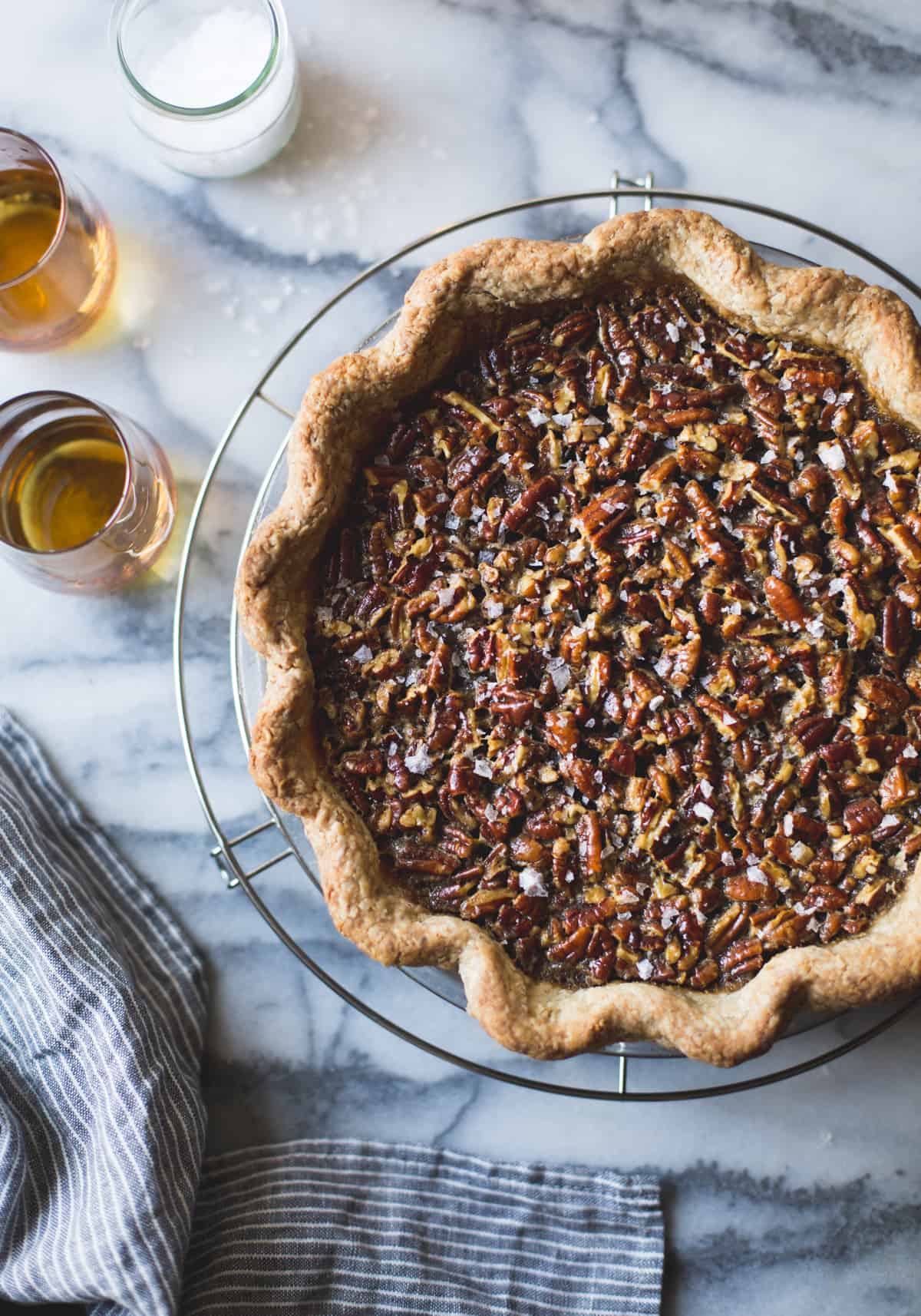 The result is kind of insane. The custard is smooth as butter, just sweet enough, and with a boozy punch. The warm flavor of the sorghum syrup rings through, melding with molassesy dark brown sugar and fruity bourbon. The taste is almost tropical. Candied nuts crunch along with large flakes of salt, and crispy crust shatters and flakes everywhere, infused with whole grain flavors of its own: sorghum, oat, chia seed and lots of butter. 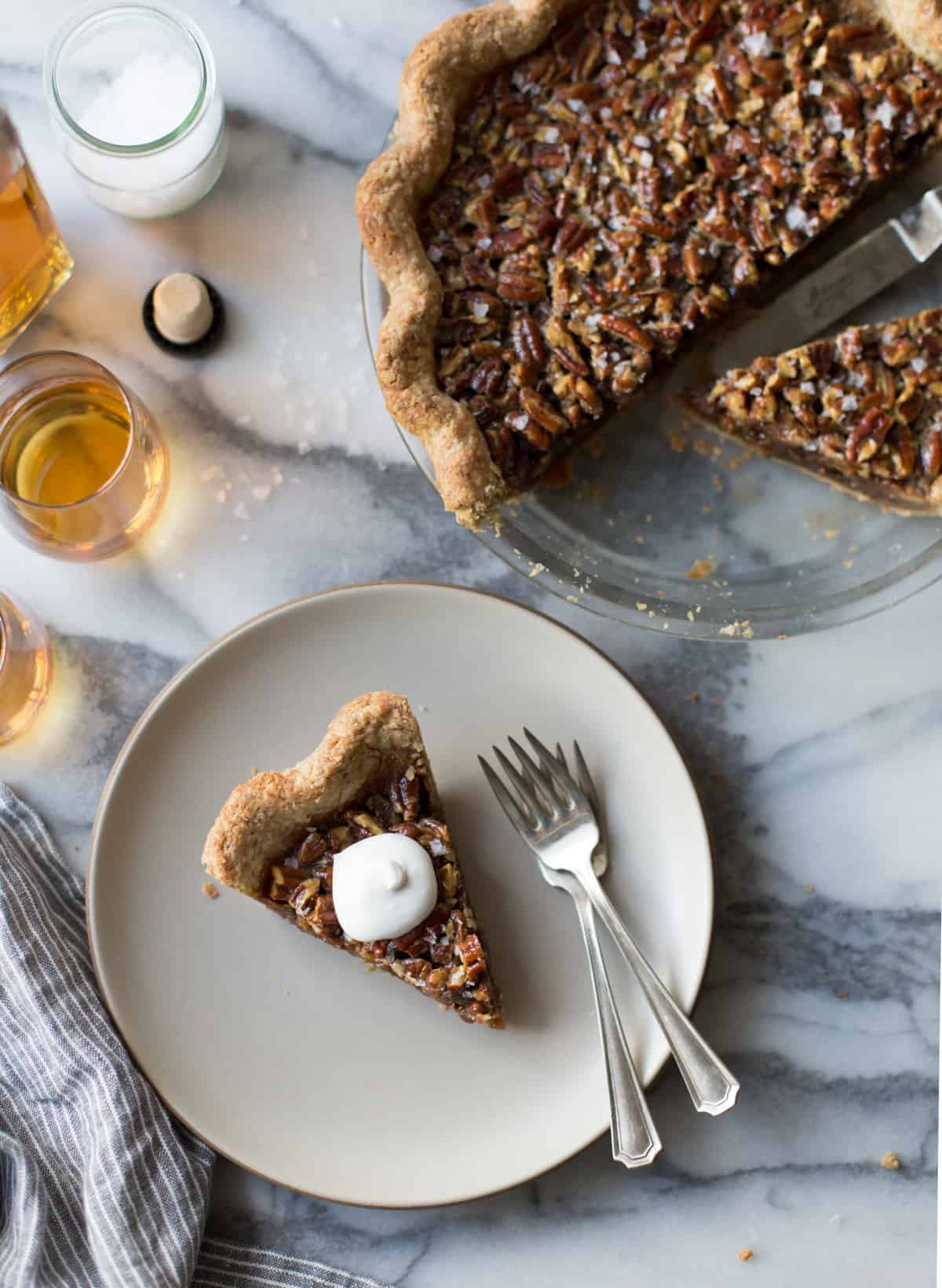 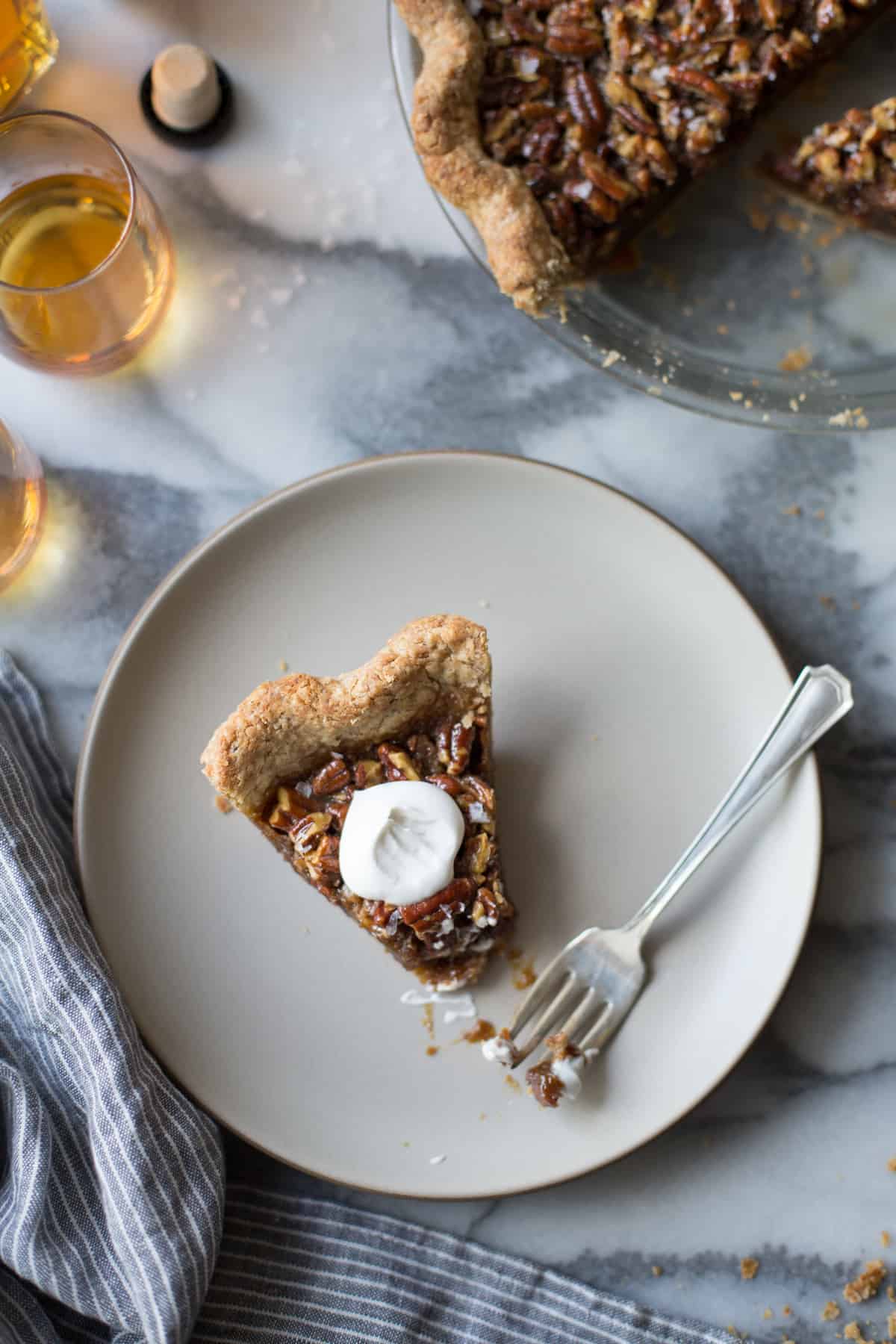 I had some whipped coconut cream left over from another project, and I can hardly believe how well the two pair. The cream rounds out the flavors of the pie, bringing out the floral, fruity vibe of the filling.

My mind is swirling with other uses for this luscious syrup: granola, caramel corn, crispy rice treats, pancakes... but for now, I'll just have another slice of pie (followed by a slice of Sarah's). 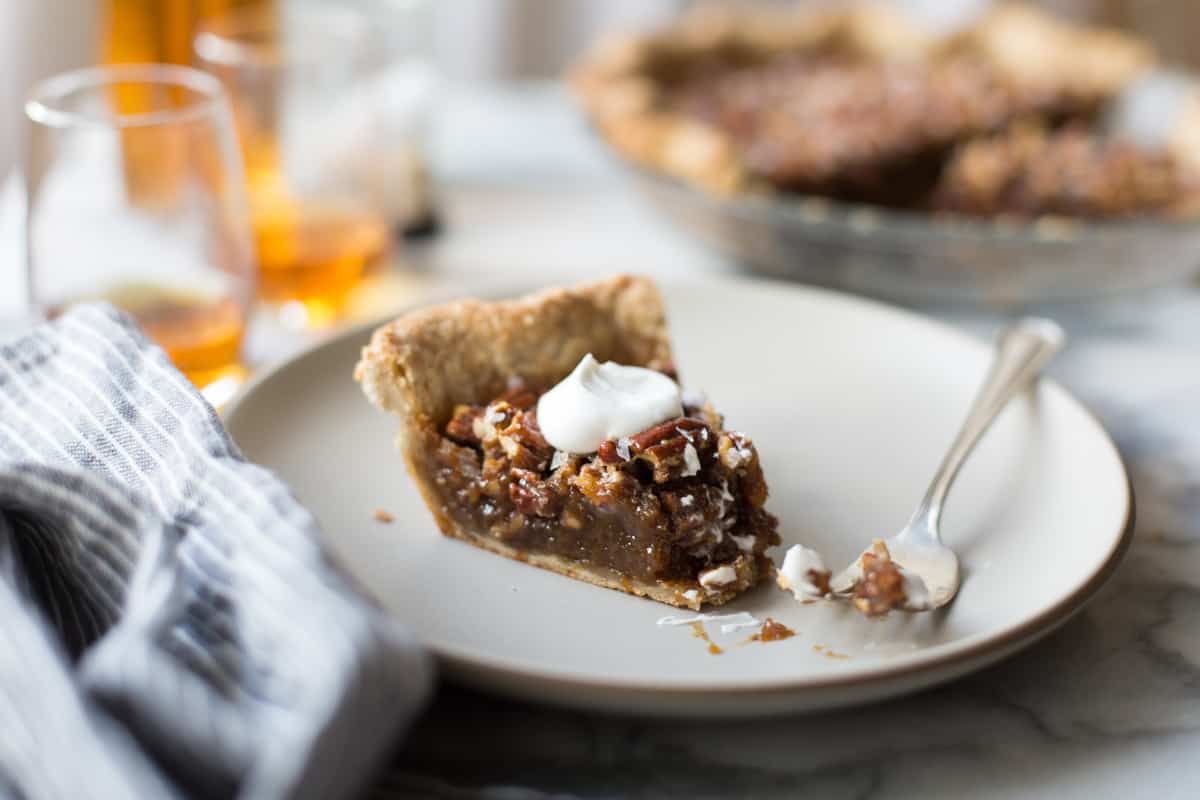 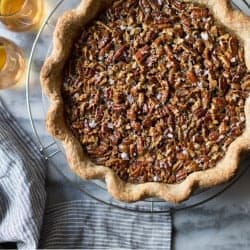 Sorghum syrup takes the place of the usual corn syrup in this twist on a classic pie, delivering a punch of flavor, along with a tipple of bourbon, to the silky custard hiding beneath caramelized pecans flecked with flaky salt, all wrapped up in a flaky sorghum flour crust. If you're sensitive to trace amounts of bourbon, make this with Queen Jennie Whiskey, which is made from sorghum and is gluten-free. Adapted from my Maple Bourbon Pecan Pie which was adapted from Cook's Country Bourbon Pecan Pie. Taking the extra time to break up the pecans with your fingers and give the custard a brief cook on the stove ensures a clear, silky filling. Nutritional values are based on one of twelve servings. 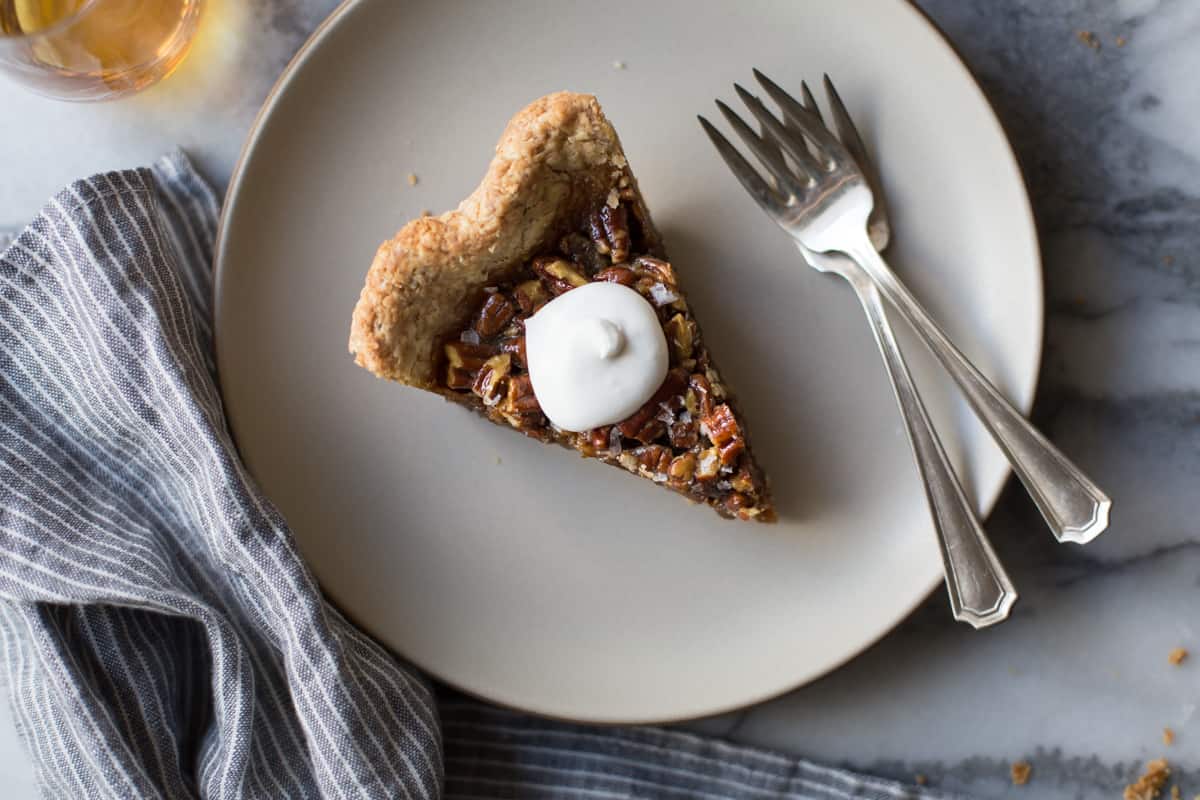 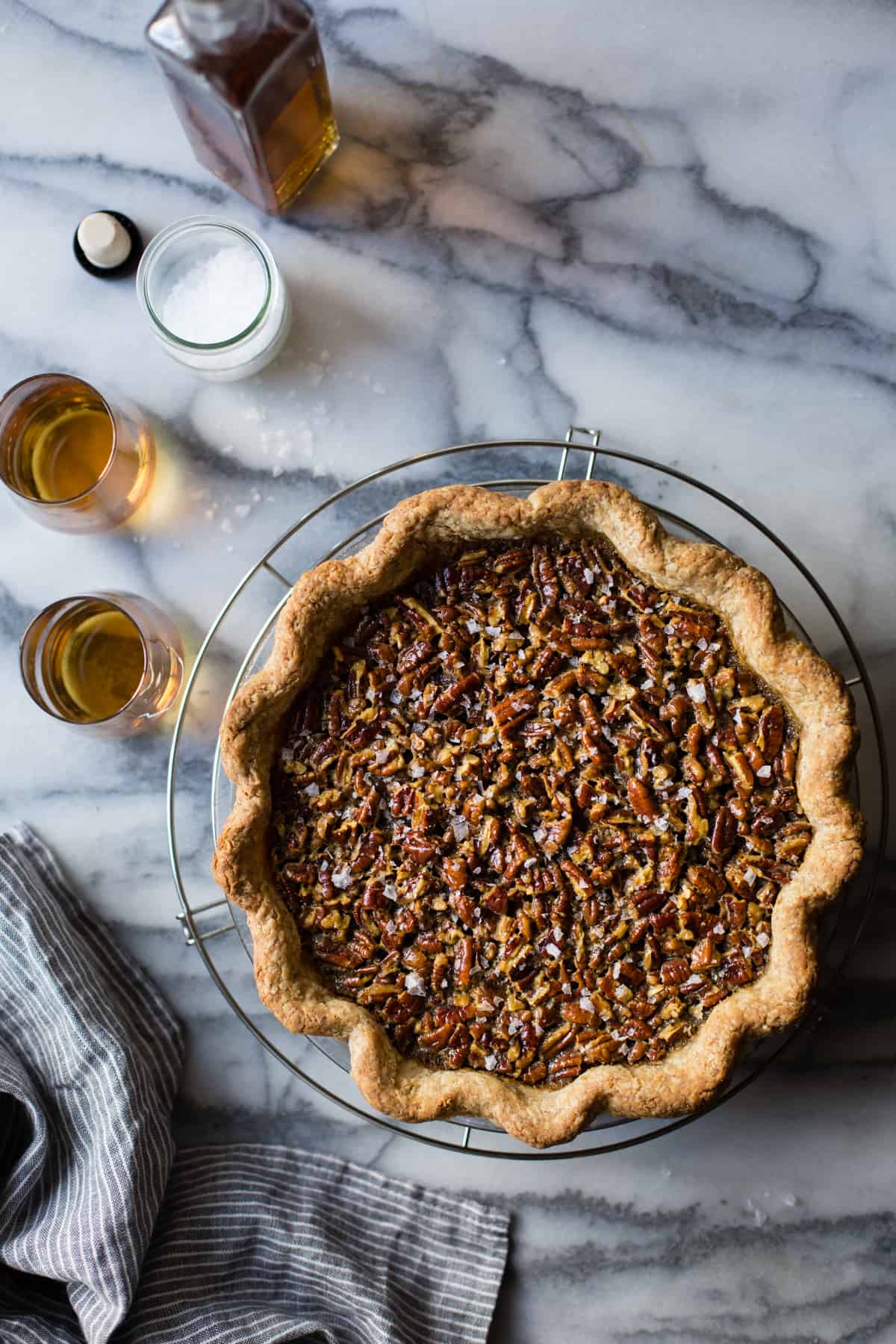