A grain-free take on the Swedish crispbread Knäckebröd. These paleo crackers are crispy, crunchy, and delicious with all your favorite cracker accoutrements. Effortless to make and imminently customizable. Gluten-free, dairy-free, vegan, nut-free, and paleo-friendly. Thanks to Bob's Red Mill for sponsoring this post! 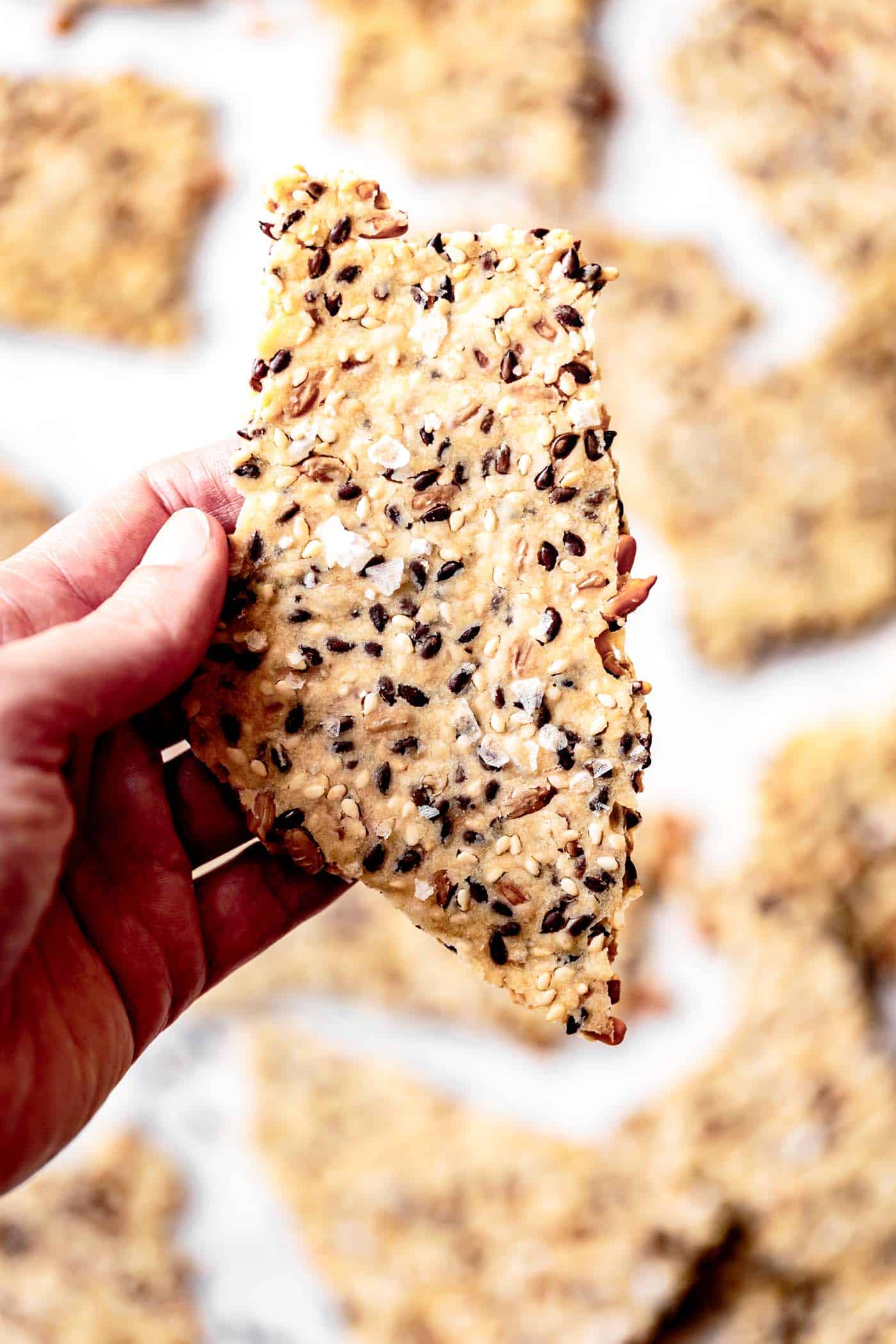 I'm going on month 8 of an interesting elimination diet that I started earlier this year for health reasons. Among the things I had to cut out of my diet were eggs, almonds, yeast, grains, and dairy. This meant I couldn't have bread of any kind – even most grain-free breads rely on eggs and almond flour.

My most insatiable craving during this time was avocado toast. Pre-elimination diet, I regularly made it using a thick slice of gluten-free sourdough toasted in a skillet with ghee, and chunks of firm-ripe avocado folded with lemon juice, olive oil, and salt until it formed a chunky emulsion. I could not stop thinking about it. 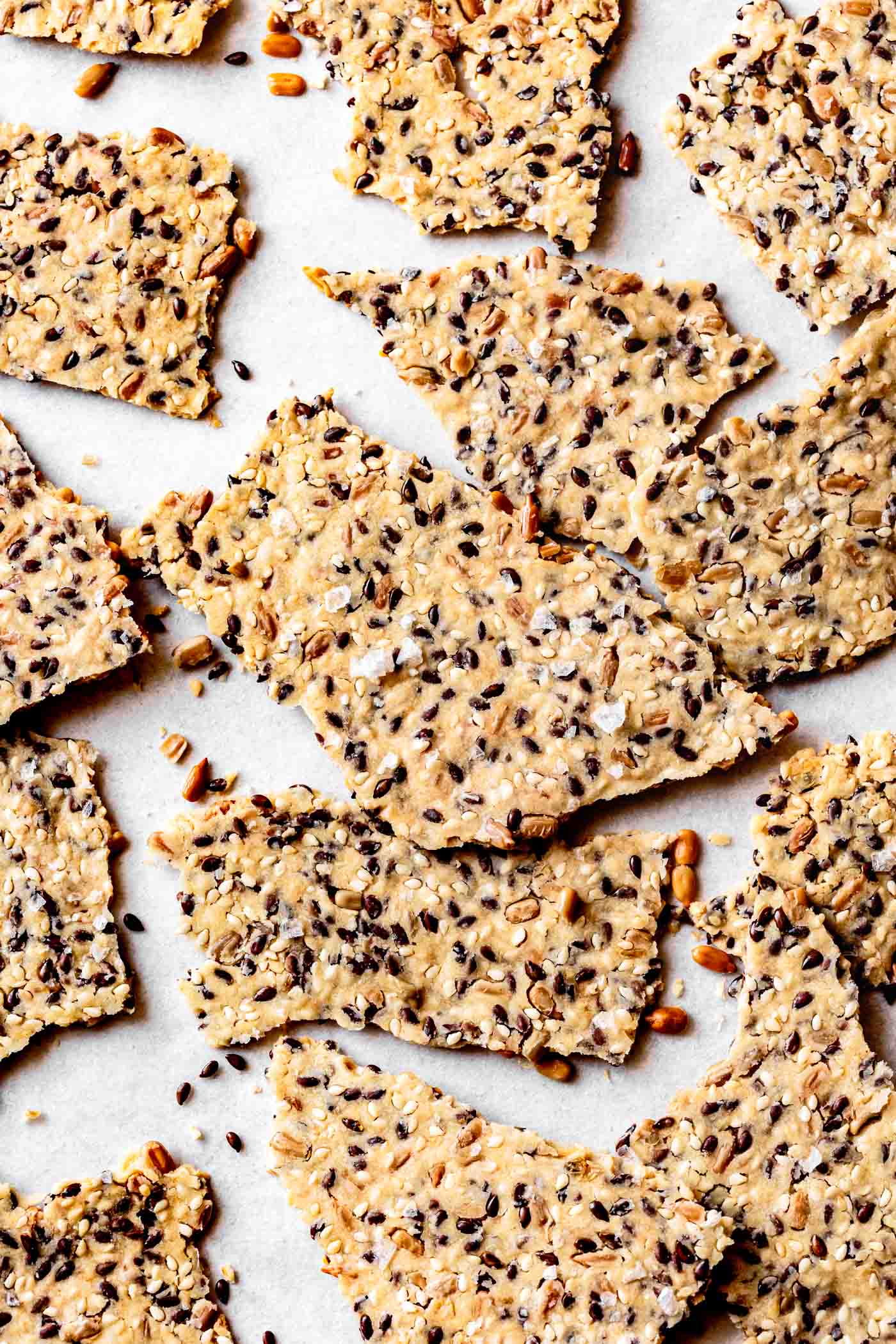 Swedish Crackers to the Rescue

Then one happy day, my dear friend Mia, who's half Swedish, sent me a recipe for the traditional crispbread called Knäckebröd, a crunchy rustic cracker made with loads of seeds bound together with flour, water, salt, and oil. Mia said, "We eat knäckebröd on a daily basis. For Swedes it’s our crack! It’s traditionally made with rye flour. So good!"

Mia's recipe called for buckwheat or spelt flour, but I decided to try making it with cassava flour realizing that if it turned out, I'd *actually* be able to eat it.

It worked like a charm. And when I piled a rustic grain-free cracker with avocados, pickled onion, cucumber, and dill, I practically wept with relief. 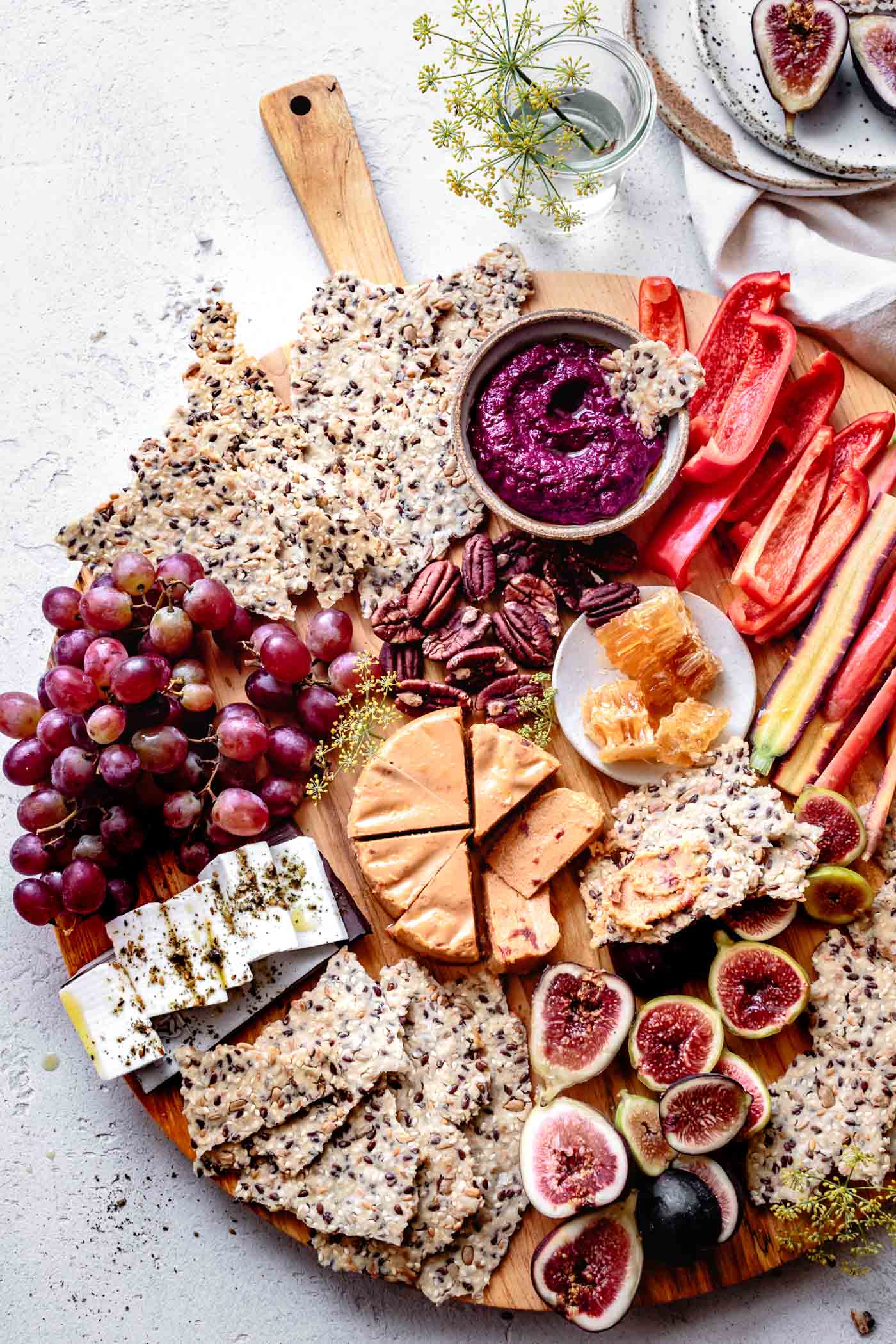 Bob's Red Mill Cassava flour has been my savior during this strange year. With it, I've made all sorts of goodies to satisfy my sweet tooth: paleo cookies, zucchini bread, chocolate tart, cobbler, banana bread, pie crust, and loads more recipes that are in the works!

Cassava flour comes from a tuber and is commonly used in cuisines of South America, Asia, and Africa. It's grain-free, but it actually resembles glutenous flour more than many gluten-free grain flours thanks to its starchy, sticky quality and mild taste. Cassava flour is also prebiotic, meaning it makes a happy environment for good gut bacteria to flourish. What's not to love?

For these paleo crackers, I swapped cassava flour in for the traditional flours used for knäckebröd – rye or buckwheat – and it only needed a little extra water to help the dough come together.

These paleo crackers are indistinguishable from their gluteny counterpart. They also happen to be vegan, gluten-free, dairy-free, and nut-free. 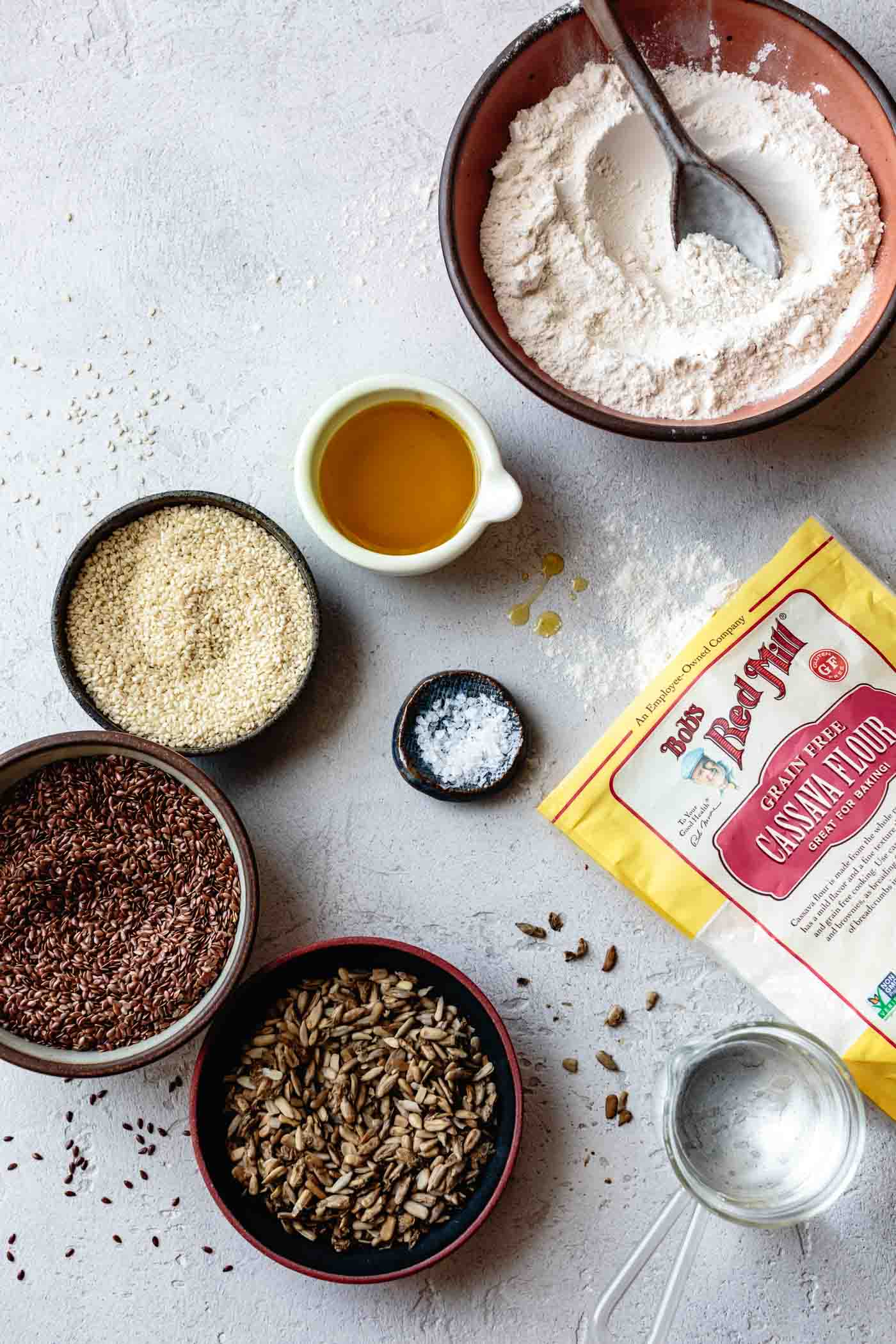 How to Make Paleo Crackers with Cassava Flour: step-by-step photos 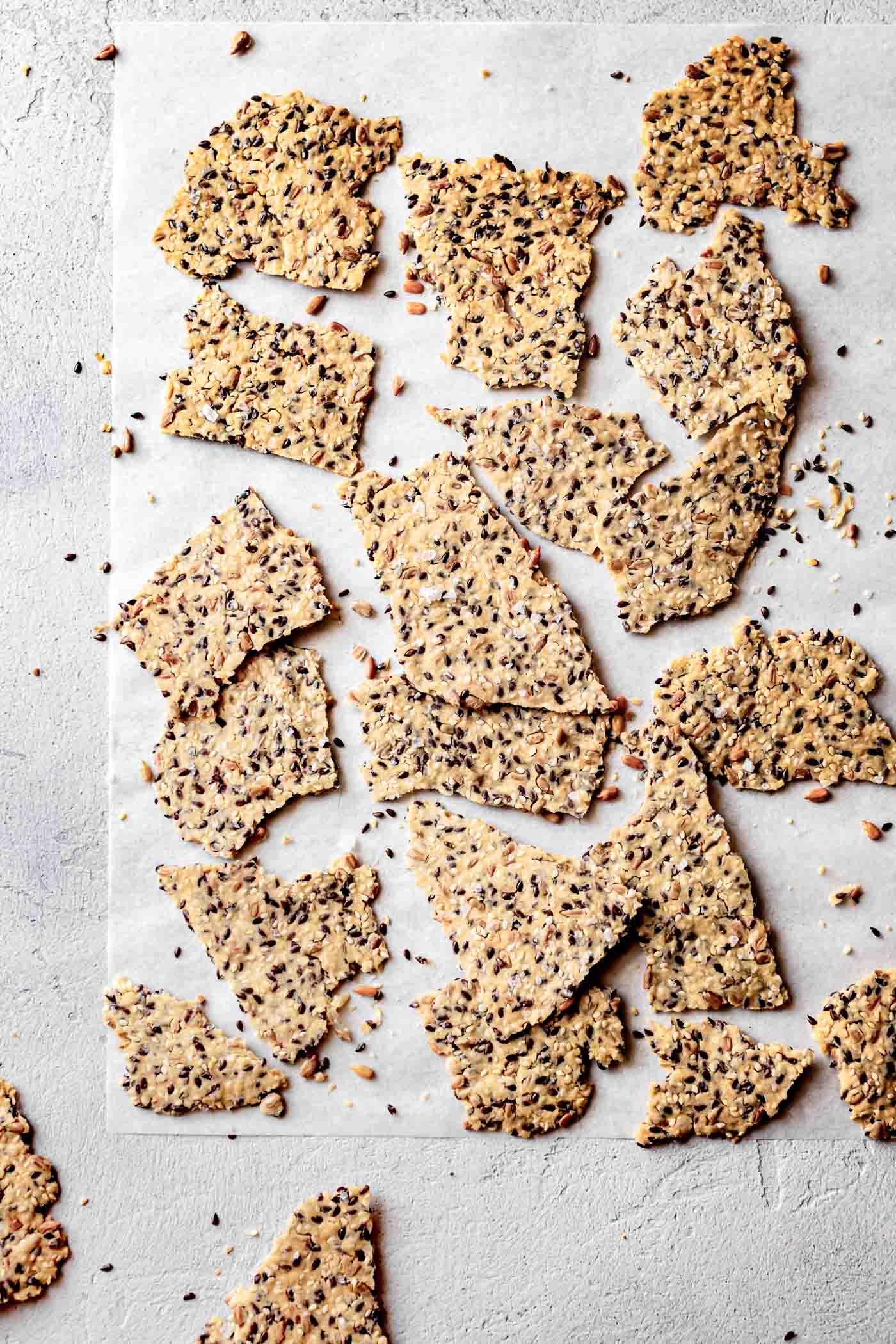 How to enjoy the best paleo crackers: 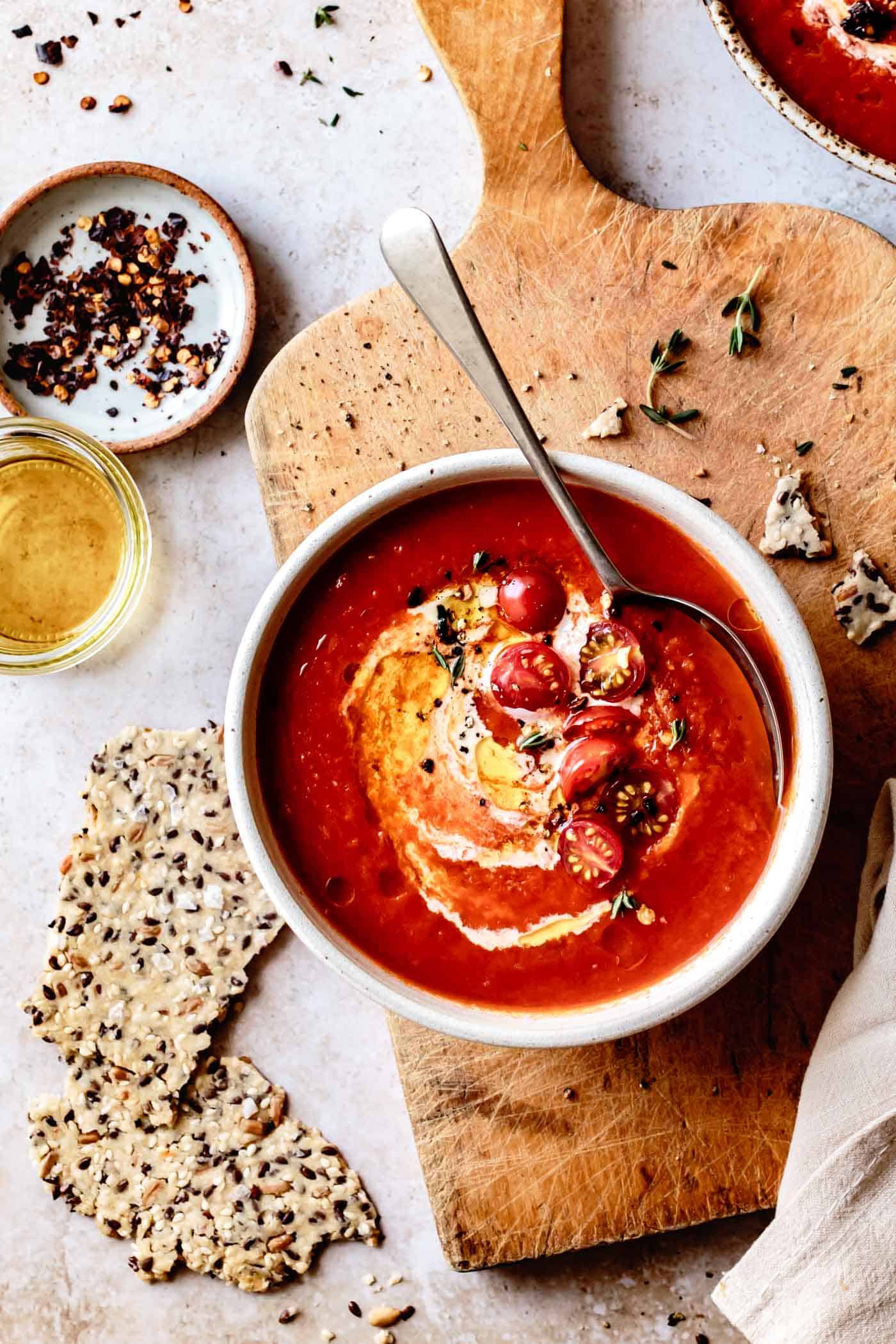 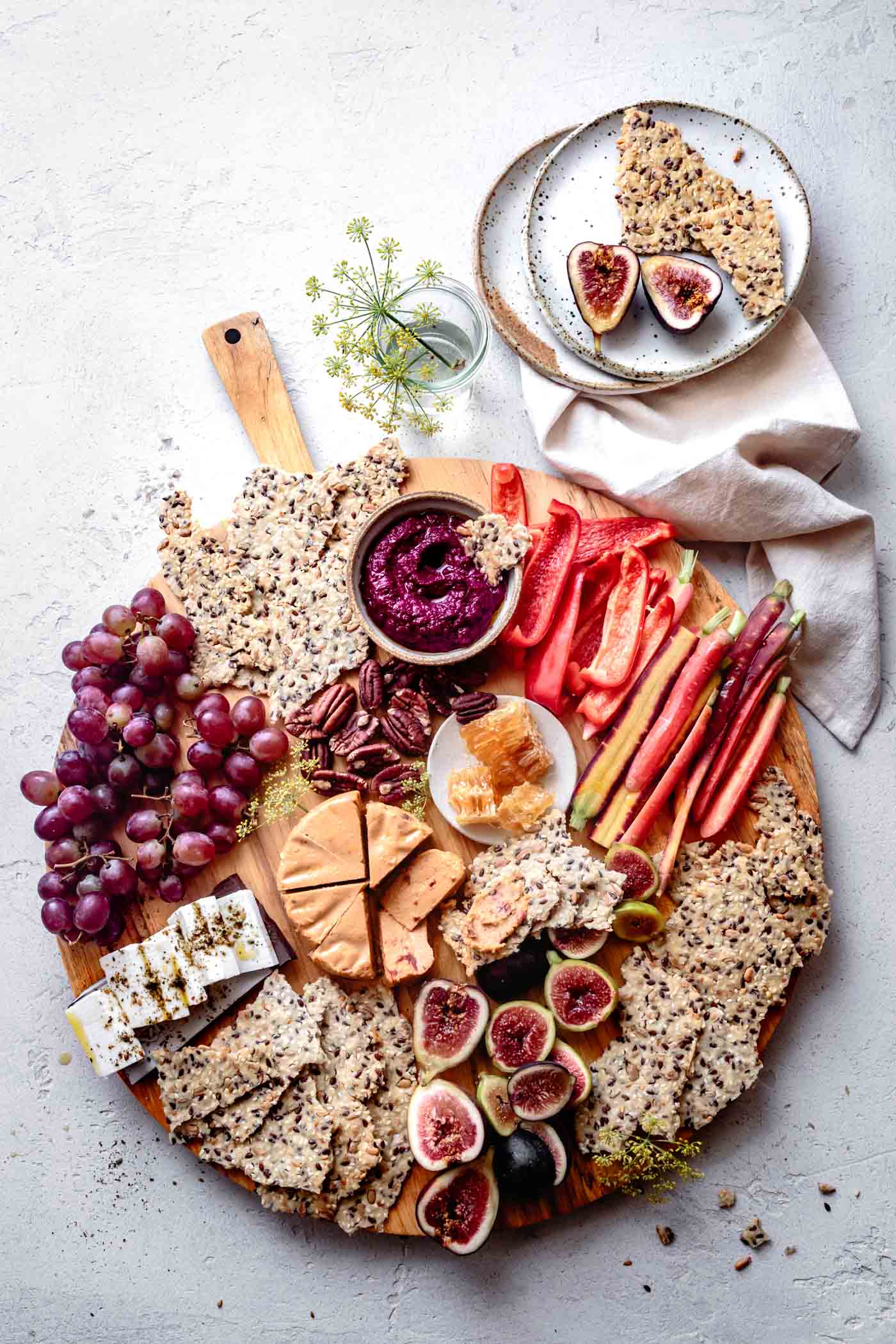 A Vegan Cheeseboard with Gluten-Free Crackers

Dress these healthy paleo crackers up with a seasonal cheeseboard (vegan if you like!) Here's what I put on mine for early fall: 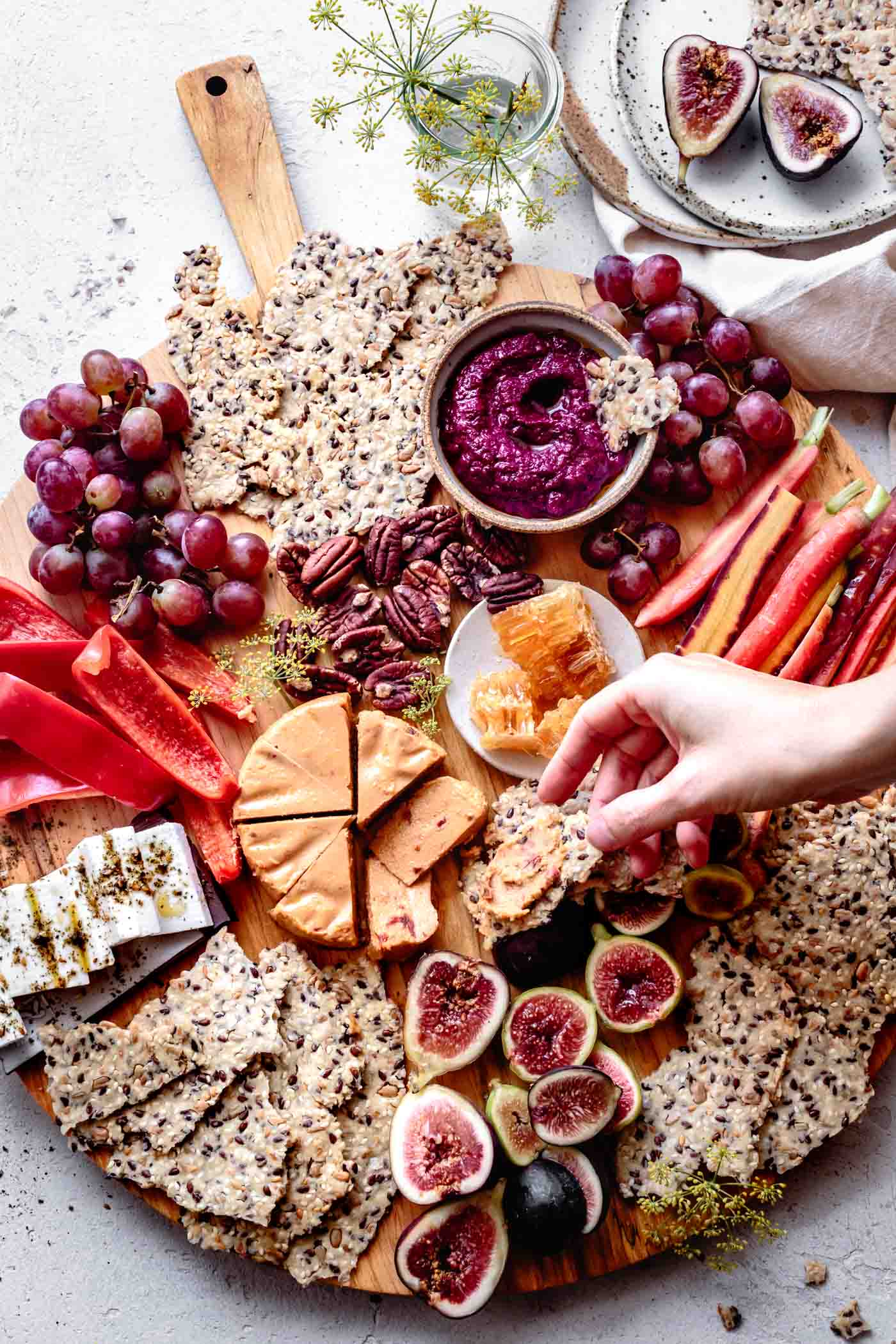 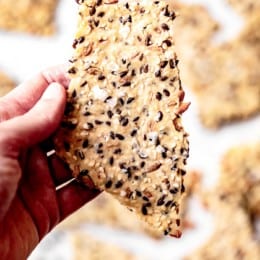 Substitution suggestions: For a non-paleo version, try these with buckwheat or corn flour. Or for a more traditional gluten-ful version, use rye flour or spelt flour.  Feel free to play fast and loose with the seeds, using any combination you like. You can try adding hemp, poppy, chia, and/or pumpkin seeds.  Seasoning suggestions (add to the dough or on top of the crackers):
-minced fresh rosemary
-everything bagel seasoning
-1 teaspoon cumin or fennel seed
-oregano
-garlic and/or onion powder
-nigella seed
-flavorful oil, such as walnut or toasted sesame
-chile flakes, Aleppo pepper, or togarashi
-nutritional yeast Nutrition values are for 1 of 40 crackers. 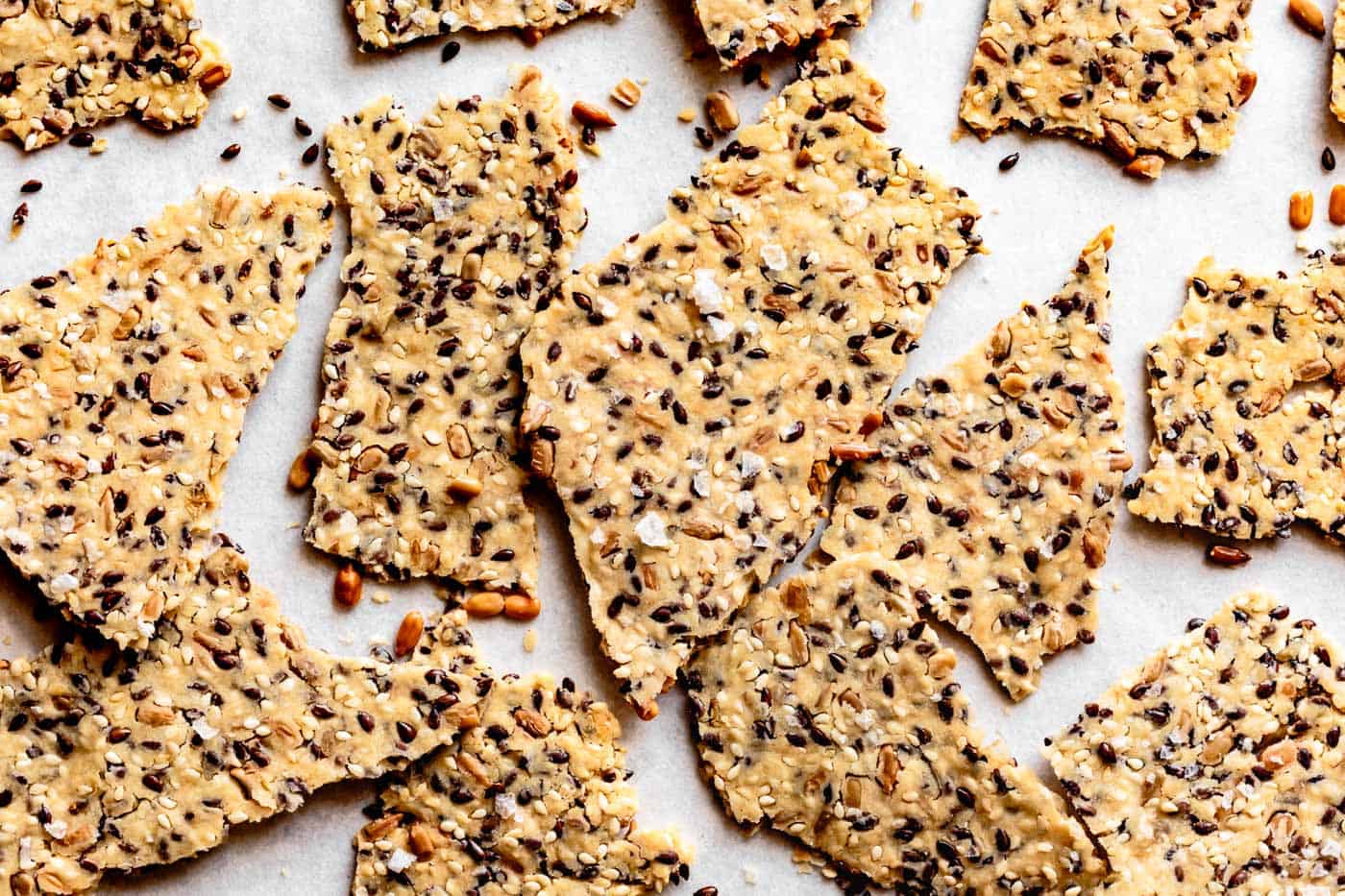 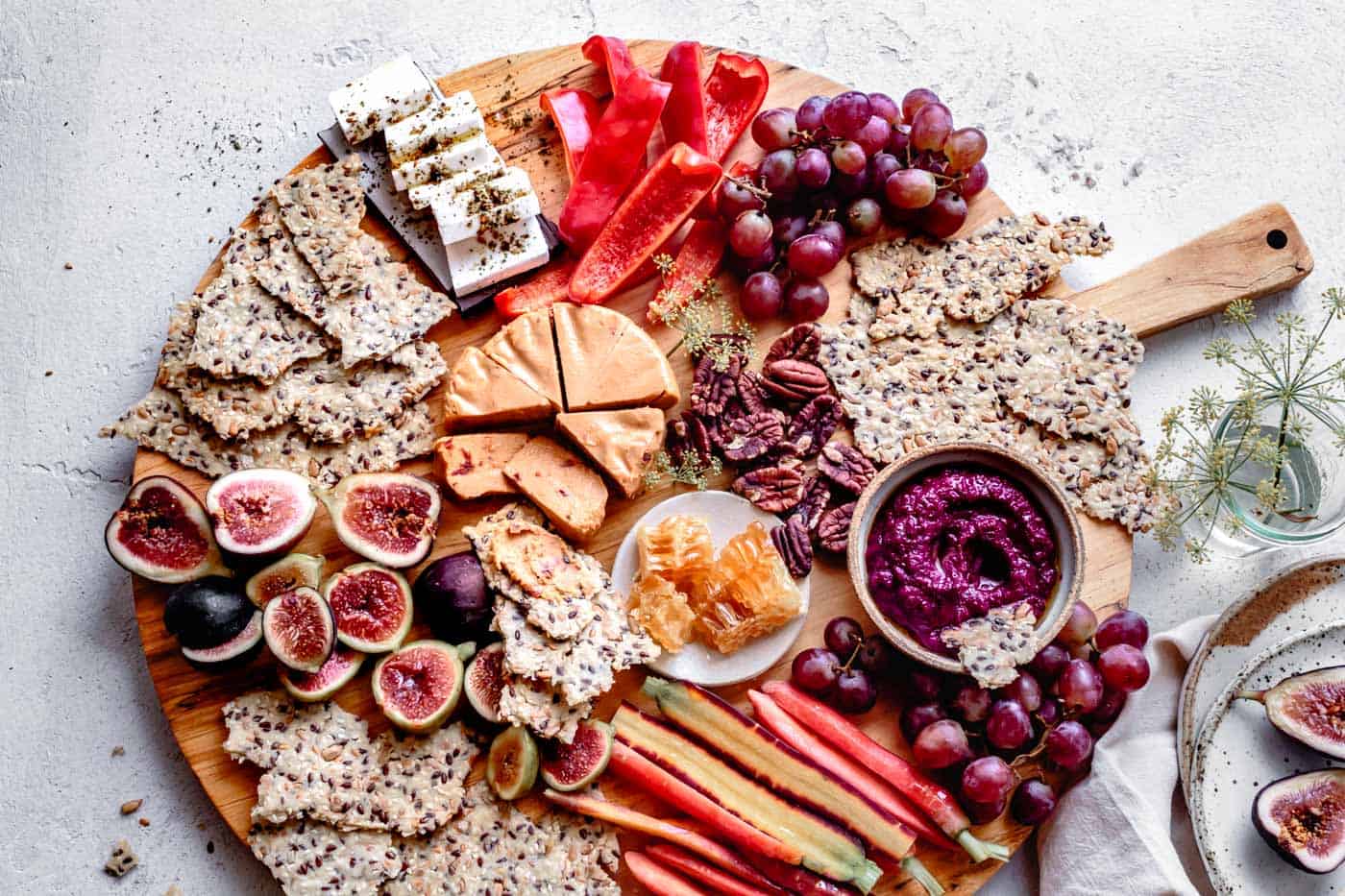