This vegan pâté recipe gets body from lentils and toasted walnuts and big flavor from a few unusual suspects: miso, mirin, and umeboshi. 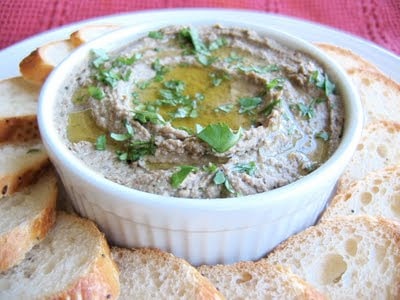 Growing up, my dad would often set out a container of Trader Joe's pâté with cheese and crackers for a snack (he's a classy guy!) Years later I discovered this plant-based walnut lentil pâté recipe that tastes exactly the way I remember the traditional stuff, only with none of the same ingredients. Read on!

The first job I had in San Francisco was at a gluten- and dairy-free wholesale bakery called Crave. The company consisted of myself, another baker, and the owner. We baked out of a communal kitchen in the 'Dogpatch' district of San Francisco, which housed a couple of other caterers and a (now well-known) San Francisco charcuterie maker. 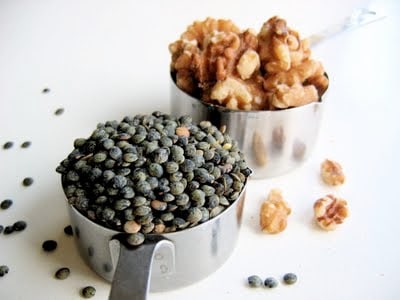 Our table sat next to 'the pig guy,' as I called him in my head, and while Amber and I were cutting up hundreds of pretty little organic brownies on our steel table, the pig guy would be hacking up a whole pig four feet away on the next table over. Being incredibly squeamish, I found this horrifying, and oftenhad to stare at the grisly deed for hours until I'd pluck up the courage to ask Amber to switch sides with me. 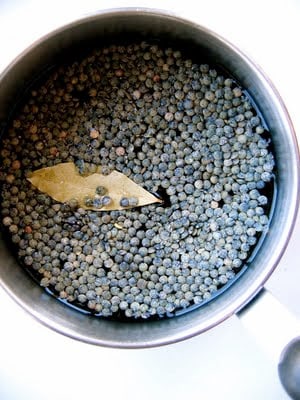 Sometimes I would open the compost bin to dump in our eggshells and used parchment paper, and the vacant eyes of a pig's head would stare back at me (when the pig guy wasn't using it to make headcheese, that is). One day, the pig guy brought a vat of burgundy liquid into the walk-in. Innocently thinking it was some kind of red wine reduction, I asked after the contents. 'You don't want to know,' he said darkly. And I'll never forget themorning when the bell rang before the pig guy had arrived for his daily butchering and grinding. A man stood outside with a pig in a large plastic bag, which Amber and I had to drag into the kitchen ourselves. 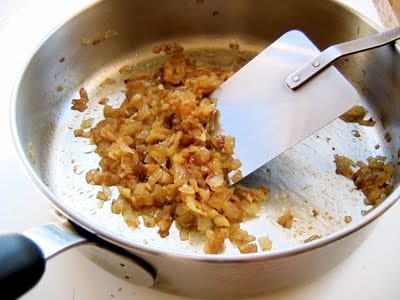 Now I wish I hadn't been so squeamish, because I would have liked to taste his now renowned sausages. But the sight put me off meat (particularly pork) for a good while. 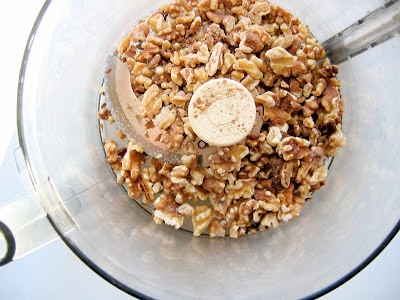 When I moved in with my vegetarian partner Jay, I used it as an excuse to invest in many plant-based cookbooks. Everything by Deborah Madison found its way onto my shelf, in addition to Chez Panisse Vegetables, The Moosewood Cookbook and Enchanted Broccoli Forest, and Everyday Greens, to name just a few. When I learned that Real Food Daily, a vegan restaurant in my old haunts of Santa Monica, had come out with a collection of tantalizing recipes and photography, I snapped it up. 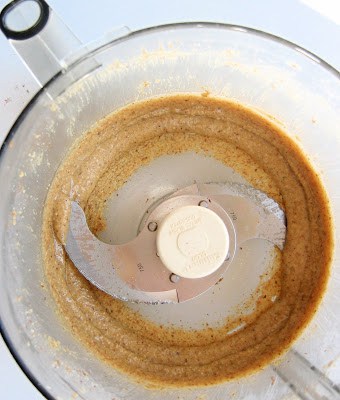 It had been many years since I had eaten real pâté when I pureed up this walnut lentil pâté for the first time. When I tasted it, a million memories rushed back of eating the Trader Joe's pâté my dad used to buy, with cornichons (tiny, tangy pickles) and stone-ground, whole-wheat crackers. It tasted exactly the way I remembered the meaty stuff: sweet, meaty and rich, with the texture of velvet on the tongue.

While sherry and liver gave the pâté with which I was familiar its characteristically complex taste, a stealthy trio of Japanese ingredients flavor this vegan spread. First, caramelized onions and garlic are deglazed with Mirin, a sweet cooking wine. Bay leaf-scented lentils and toasted walnuts are then blended with umeboshi, a pink puree made from pickled sour plums, and miso, fermented soybean paste. A handful of fresh herbs adds further depth and flecks of color. The recipe does require several steps - sauteing onions, toasting the nuts, cooking the lentils - but in the end, this vegan pâté recipe comes together in minutes with the help of a food processor. 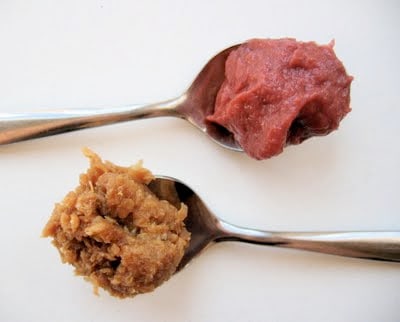 I've made this vegan pâté many times, for many events, varying the herbs, adding a bit of olive oil for moisture, but keeping the rest exactly the same. Every skeptical mouth that tastes this unassuming spread smiles in rapturous surprise; most go on to ask for the recipe. 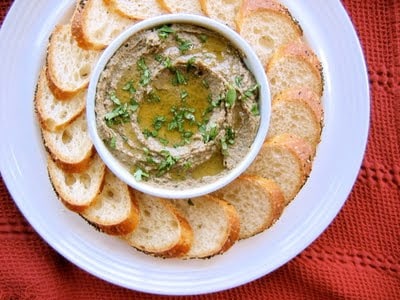 And I'm always happy to tell them that no pigs were harmed in the making of this plant-based walnut lentil pâté. 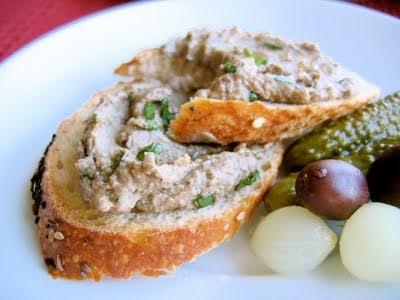 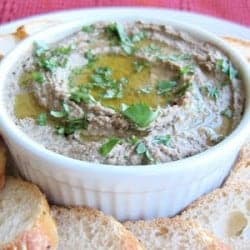 Adapted from the Real Food Daily Cookbook. Miso, umeboshi paste and mirin can all be found in hippy health food stores/Whole Foods in the Asian foods aisle, or at Asian (Japanese) markets. Look for miso that is stored in the refrigerator rather than shelf stable, as it will contain all the beneficial bacteria and probiotics of which miso is full. Don't worry about the pâté's lack of salt - the miso and umeboshi paste both contain the salt needed to give the pâté just the right amount of flavor. Nutritional values are based on one of eight servings. 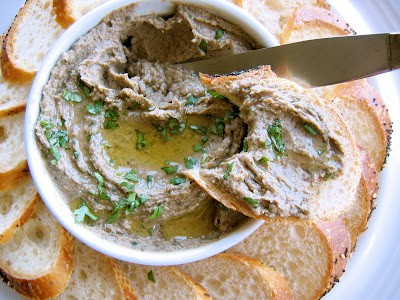