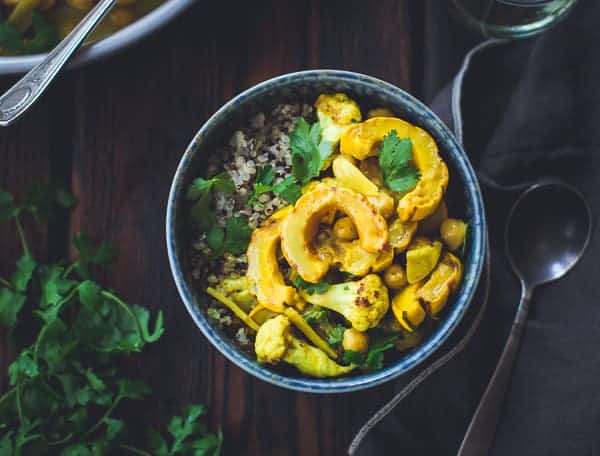 When I tell people that I spent my junior year of college in Bologna, Italy, the first thing they usually say is, "I bet the food there was amazing!" In actuality, with the exception of a dish of wild mushrooms from a restaurant, a single gelateria that I discovered a month before I came home, and the many containers of super creamy yogurt I nommed, this was not exactly the case. 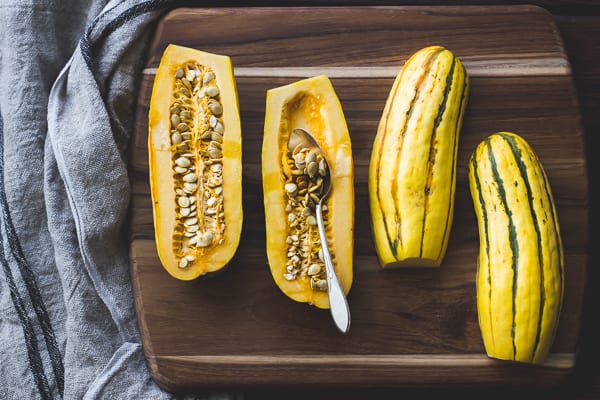 Bologna is best known for its hand-shaped pastas stuffed with pork and smothered in cream sauce, which I'm sure are delectable. However, having become interested in health for the first time in my life, this wasn't a meal I was eager to eat on a daily basis, trying as I was to avoid wheat, dairy, and mammals. Plus, I was living off of student loans during the year in which the dollar crashed below the Euro. I took to doing most of my shopping at a discount grocer on the outskirts of town where one could pick up cut-rate wines, cheeses, and packets of smoked salmon, all for under a Euro. (I'm lucky I didn't pick up a case of food poisoning while I was at it.)

As for cooking at home, following recipes was challenging as we had no measuring equipment save for a tiny scale that my housemate used to weigh out her daily pasta ration. (This is one reason that I try to add gram measurements to my recipes!) That year, I survived mainly on a diet of risotto, salads, and sorbetti, while my best friend and I, homesick for the diverse cuisines of California, occasionally tried to emulate Mexican and Indian food in our small, poorly equipped kitchens. 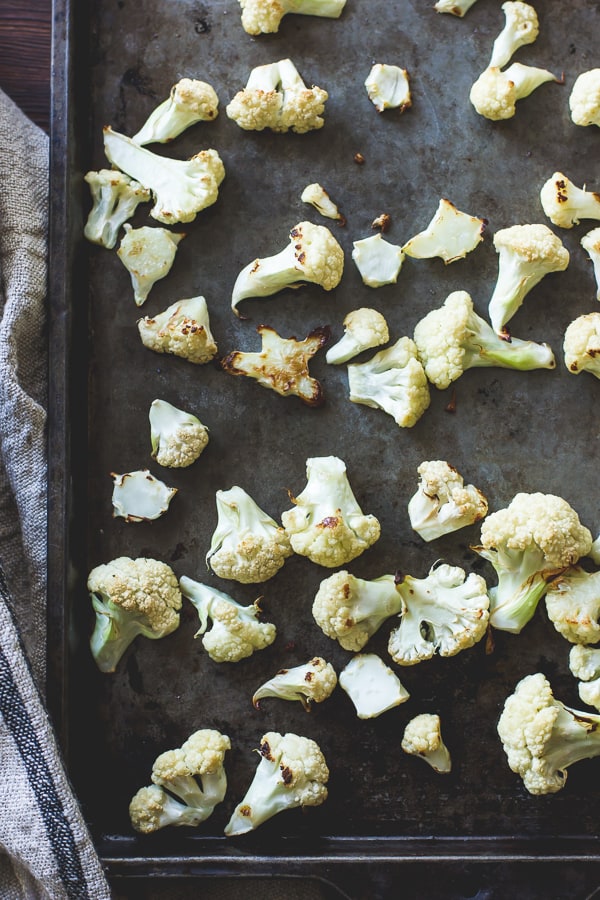 One of the first things I recall cooking in our dorm-like room was rice in a cheap, non-stick pot we had purchased from a street market. Growing up, my family had eschewed Teflon, thus I didn't realize how sensitive the stuff was. Similarly clueless about how to cook rice, I stirred the mixture vigorously with a metal spoon as it simmered away. Unsurprisingly, I turned out a pot of white goo flecked with black shards of non-stick coating. That gluey, grey substance is the first thing my mind flashes to when asked about the cuisine of Bologna. 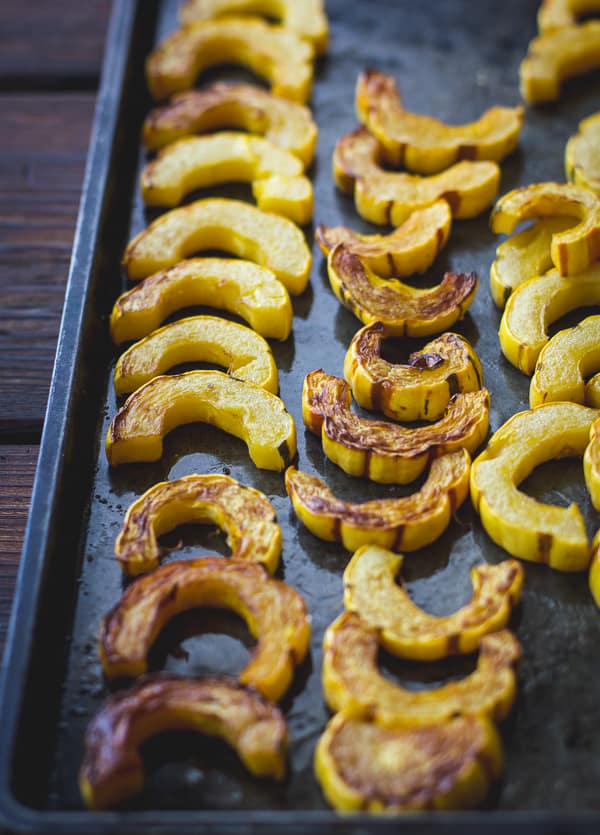 We threw the pot away, and I eventually learned how to cook rice without it becoming a toxic glob. We managed to track down curry powder and coconut milk with which we made what we referred to as fake Indian food. Sauteed onions and potatoes, sometimes chicken, simmered with the spice mixture and coconut milk became a lovely curry-like substance that went into our regular rotation. 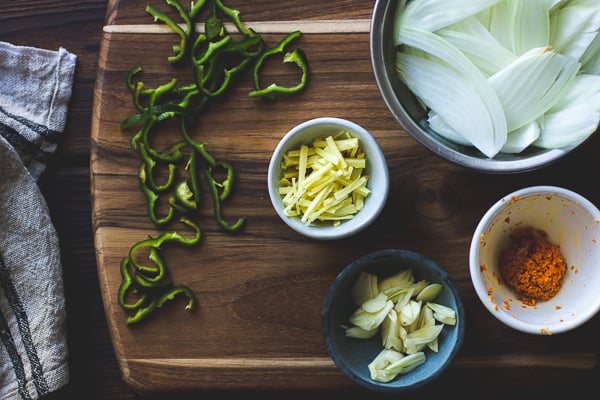 I realized how little I still know about curry when I brought up the subject with Nik and Phi at a recent trip to a chaat house in the South Bay. Nik told me that curry powder was a Western confabulation, as was the term curry, which enveloped the broad category of spiced dishes cooked with a gravy. (Though I just consulted Wikipedia on the subject, and it turns out curries can be either saucy or dry.) 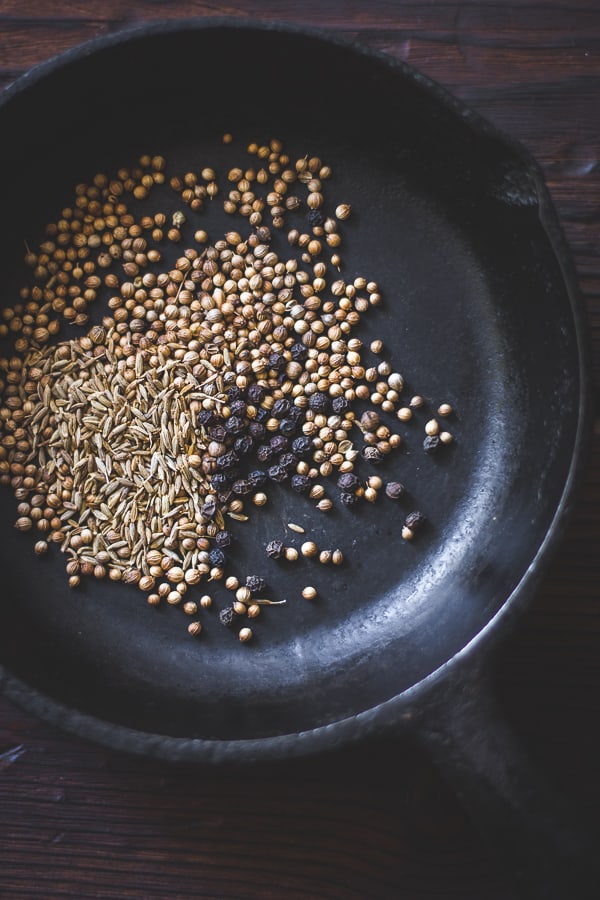 In any case, this particular curry came about in quite an accidental and fake-Indian-foody way. I was in bed with a cold and got hangry enough to tear myself away from whatever trashy movie I'd found on Netflix to take my mind off my stuffy sinuses. In the fridge were some leftovers from these stuffed poblanos – quinoa, peppers, and roasted butternut squash. Craving something warm and soupy, I sauteed up some onion, garlic, and ginger, added curry powder, turmeric and coconut milk, and we spooned the whole thing over quinoa topped with a handful of cilantro and a squeeze of lime. 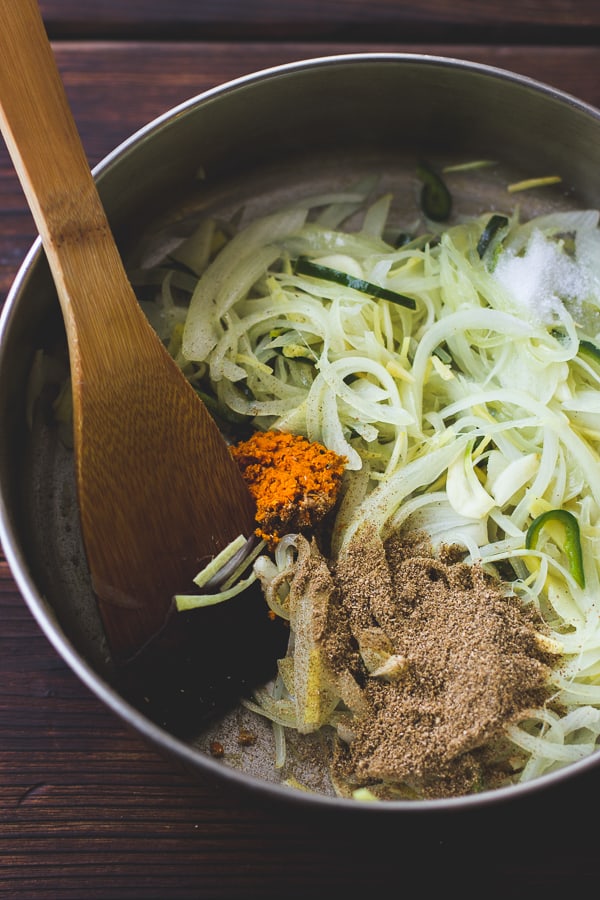 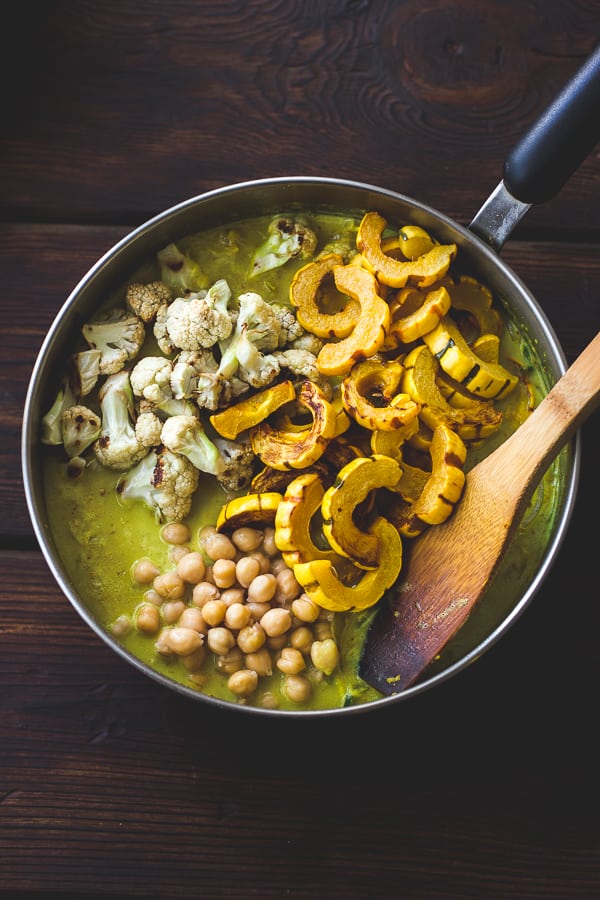 I won't say that the curry cured me, but I did feel much better the next day (and I even had some for breakfast). I've been making it non-stop ever since. 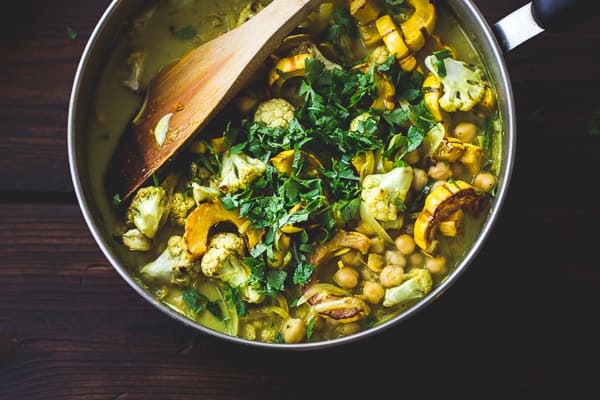 When the poblanos I'd been getting from the farmers market shifted from tasting completely mild to insanely hot, we started using just enough to give the dish a bit of kick and adding bulk with roasted cauliflower. Delicata squash make pretty half-rings and they also simplify things since you can eat their skin. We've been cooking chickpeas to have in green salads, so I added a cup to the curry which lends extra texture and protein. And I finally caved and made my own spice blend complete with fresh turmeric which brightens the flavors a bit (though store-bought curry powder and ground turmeric will be tasty, too, should you prefer). 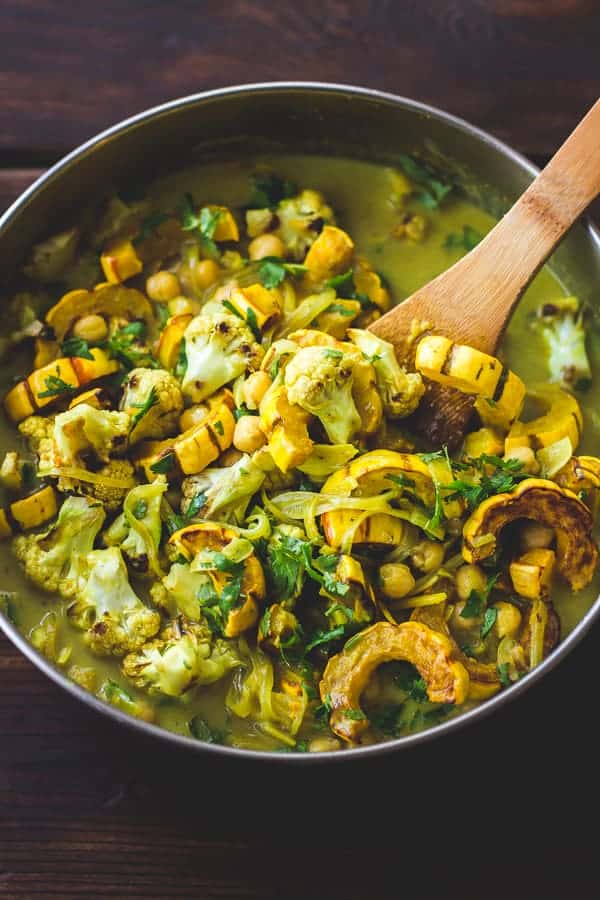 Oven-roasting the vegetables separately builds flavor and helps them hold their shape in the final dish. The base is versatile, so feel free to trade in any seasonal vegetables that you like. I've included the poblano version below since it was a favorite.

Soaking the quinoa for an hour prior to cooking rids it of its naturally bitter coating and helps it steam more quickly. But you can certainly serve this over rice instead. 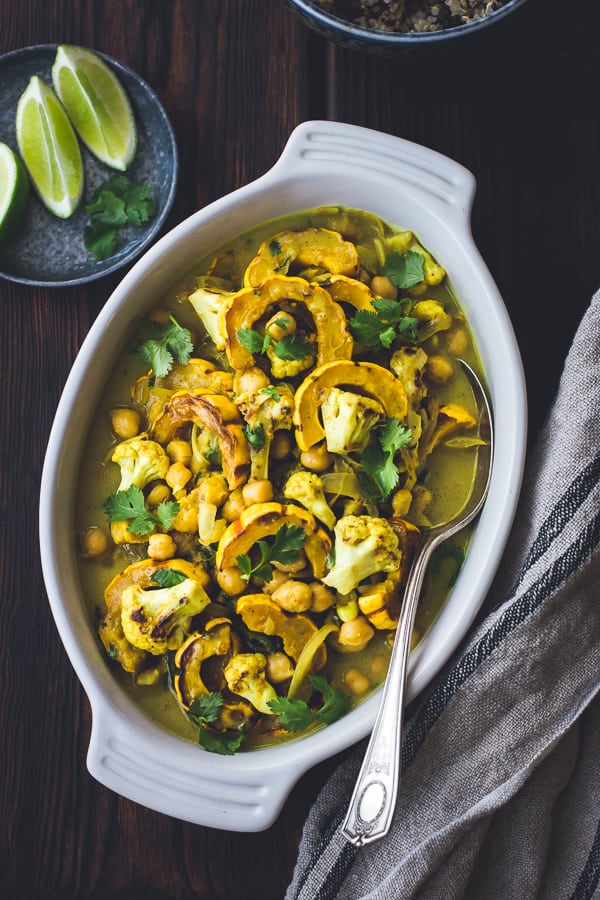 Just take my advice and leave the Teflon out of it. 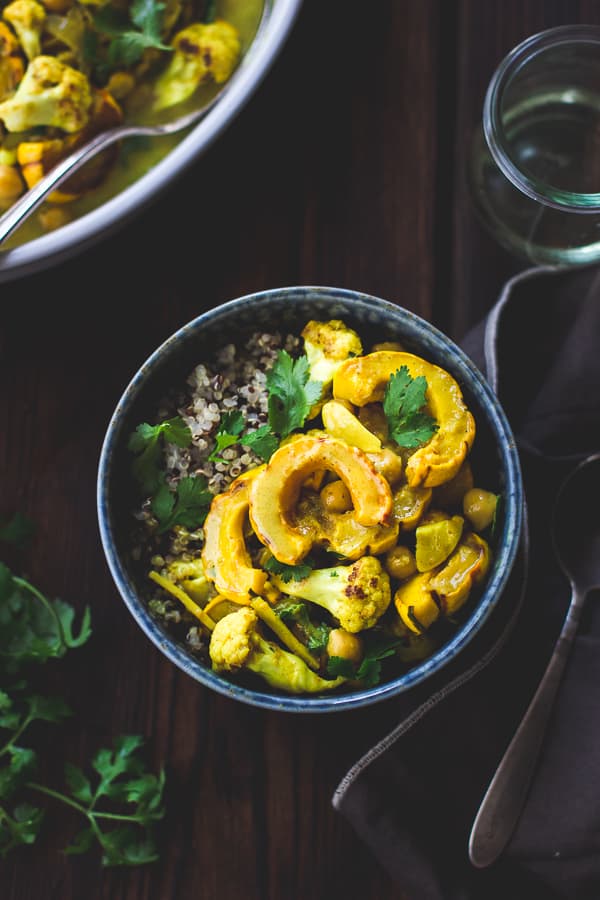 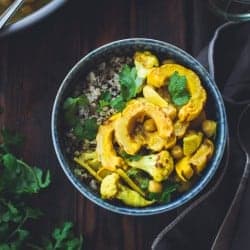 Print Recipe Pin Recipe
This is a versatile recipe that lends itself to many variations. Use any roasted vegetables you like in place of the cauliflower and/or delicata squash. Use cooked lentils in place of the chickpeas. Use pre-fab curry powder in place of the spice blend and half the amount of dried turmeric in place of the fresh. Add a few handfuls of spinach toward the end of cooking, or serve the curry over a different cooked grain. Our other favorite version uses mild poblano peppers in place of the cauliflower and chickpeas, which I've included below. To cook your own chickpeas, cover a cup or two of dried beans with plenty of cool water and let soak 8 hours or overnight. Drain, then place in a pot with plenty of water and a small bay leaf. Simmer, partially covered, until the chickpeas are almost tender, then add a teaspoon or so of salt to the water and continue cooking until the beans are tender but still hold their shape. Let cool in their broth, then refrigerate until needed, up to a week.
Alanna Taylor-Tobin
Prep Time: 15 minutes
Cook Time: 1 hour 5 minutes
Total: 1 hour 20 minutes
Servings: 4 servings

For the roasted vegetables:

Nutritional values are based on one of four servings. 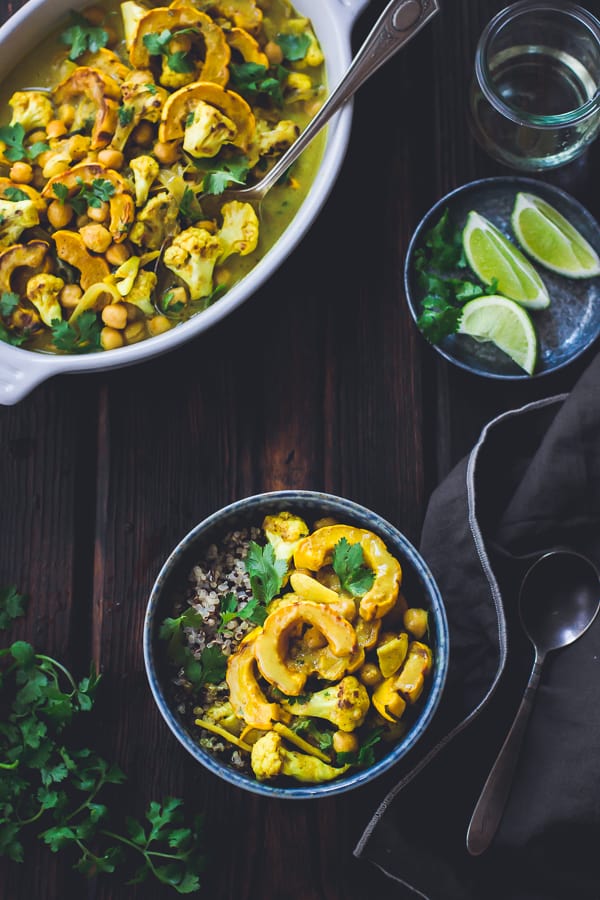 Fall is officially here and with it, all the apple