When Jay caught me muttering disgruntledly about all the "detox" recipes free of dairy, grains, sugar and booze in my feed last week, he made a brilliant suggestion. "You should post a recipe with all those things in it. A 'retox' recipe."

While I'm all for healthy eating, I can't help but think that the dead of winter is the worst time to fast on green juices and smoothies. San Francisco finally had a cold snap this past week and all I want to do is burrow under the covers, drink tea, eat chocolate, and watch Gilmore Girls with a cat on my toes.

Last weekend I needed a dessert to bring to a family potluck. I had some bananas I'd bought for making smoothies and then promptly ignored in favor of piping hot chilaquiles, so I decided to try a gluten-free version of my favorite banana cream tart.

"This is ridiculous," I thought as I whisked butter into custard, added a shot of rum, and spread the whole thing in a chocolatey tart crust. "Everyone's probably on a diet. No one's gonna eat this."

At my brother's house later that evening, I was elated to discover how wrong I'd been. My brother poured me a tall glass of brown sugar mint julep he'd whipped up. My sister had made a vat of sour cream garlic mashed potatoes to go with my sister-in-law's roast and green salad slathered in buttermilk dressing.

After dinner, I cut the tart into tiny wedges which my family fell upon like hungry bears preparing for hibernation. Everyone went back for seconds. They ate the whole thing in a matter of minutes. I regretted not making two because I thought about it long after it was gone, and I overheard my nephew say later, a wistful look in his eye that echoed my own sentiments, "I wish there was more pie..."

Luckily, this tart is pretty simple to make, as far as tarts go. It starts with a press-in crust made from cocoa, buckwheat and almond flour, a bit of tapioca starch, unrefined muscobado sugar and butter. The crumbly dough gets pressed into a tart pan (no chilling or rolling necessary), quickly frozen, and baked without the need for pie weights. A smear of chocolate in the bottom shields the crust from absorbing moisture from the custard, keeping it buttery crisp like the most flavorful shortbread you've ever had.

Into the chocolate-lined crust goes a simple butterscotch pudding (adapted from this one) flavored with vanilla bean, black rum, and muscobado sugar from Alter Eco. If we're anything alike, you'll be hard pressed not to suck down all of the warm custard as soon as it's made. But if you resist, let it cool, and spread it in the tart crust with sliced banana, you'll see how gracefully all of these flavors bring out the tropical notes in the fruit. The whole thing gets topped off with billows of whipped cream laced with more vanilla, rum and muscobado. I like to add mascarpone to make the cream a bit thicker and more stable, but you can also nix it in favor of more cream.

When you stick a piece of tart in your mouth, buttery crust gives way to creamy custard and gooey bananas. The buckwheat pops out in a symphony of earth and spice, bouncing off of sweet fruit and mild cream. Buckwheat always reminds me of toasted hazelnuts mixed with chocolate and cinnamon, and this crust makes me think of Nutella. Cacao nibs on top add crunch, and the muscobado sugar gives the dessert subtle caramel notes that make it extra addictive. This is one of my all-time favorite desserts, one that I plan to make over and over again.

Tomorrow I'm going to Kabuki Springs to marinate in steam and mud masks with my niece, who's visiting from her first year of college on the East Coast. Soaking in a sauna, drinking cucumber water and hot tea while soothing music plays in the background... now that's my idea of a winter detox.

With pie for dessert, of course. 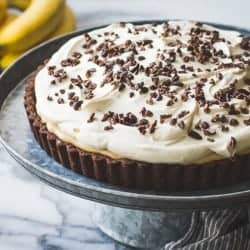 Print Recipe Pin Recipe
Be sure to give yourself a good 4 hours to complete this tart; most of the time is hands-off waiting for things to chill. I used Alter Eco's unrefined muscobado sugar here, but feel free to trade it out for lightly packed muscovado or dark brown sugar, or another unrefined sugar such as coconut, sucanat, maple, or date. I think this could be made vegan by trading the butter in the crust and custard for coconut oil, the dairy in the filling for coconut milk, and topping the pie with coconut whipped cream. Use bananas that are yellow with some brown spots for the best results. If you lack a vanilla bean, add a teaspoon of vanilla to the custard along with the rum. I like the robust molasses flavor of The Kraken Black Rum, but a golden rum would work, too. Or bourbon. Or leave the booze off for a more kid-friendly dessert (though it adds more flavor than it does booze; the alcohol is hardly noticeable). This pie is best the day it's been made, though it keeps well refrigerated for up to a few days. Makes 1 (9") tart, 10 large or 12 moderate servings
Alanna Taylor-Tobin
Prep Time: 20 minutes
Cook Time: 50 minutes
Freezing time: 15 minutes
Total: 1 hour 25 minutes
Servings: 12

Store leftover pie airtight in the fridge for up to 3 days. Nutritional values are based on one of twelve servings.