This vegan chocolate tart in a gluten free almond flour crust gets a flavor boost from sesame tahini, flaky salt, and a swirl of coconut whipped cream, all drizzled with vegan caramel sauce. A decadent vegan & gluten-free chocolate dessert everyone can enjoy! {Thanks to Bob's Red Mill for sponsoring this post!} 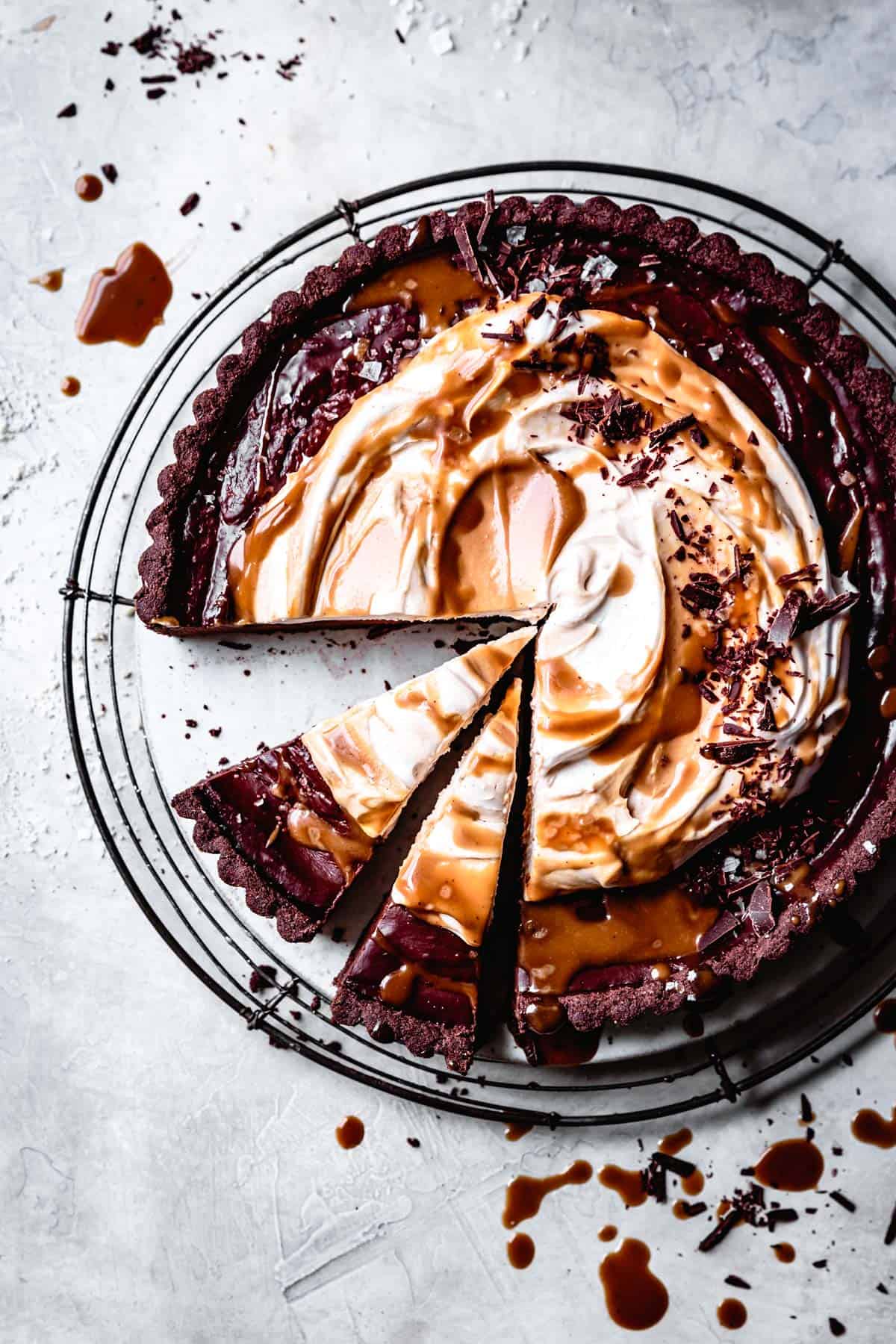 I grew up on weird flours, my health nut mama always stashing bags of buckwheat and whole wheat in the freezer so they wouldn't spoil in the hot SoCal climate. I wasn't a fan at the time, but fast forward a couple of decades to when I published an entire cookbook all about wacky gluten free flours.

If you ask any cookbook author about their book making experience, you'll see their eyes shift. Staring off into the middle distance, a haggard look will overtake their face, shellshocked like a battle-scarred war veteran or parent of a newborn. I'm no different. I became an absolute crazy person while working on Alternative Baker. To stay on schedule, I had to develop and shoot 3 recipes per week in addition to other work. Gluten free baking recipes with uncommon flours often required four or five recipe tests. Add to that grocery shopping, dish washing, writing, sending the recipes out for testing by a kind army of volunteers, and hand weighing each flour to ensure accuracy, and I barely had time to be a person. 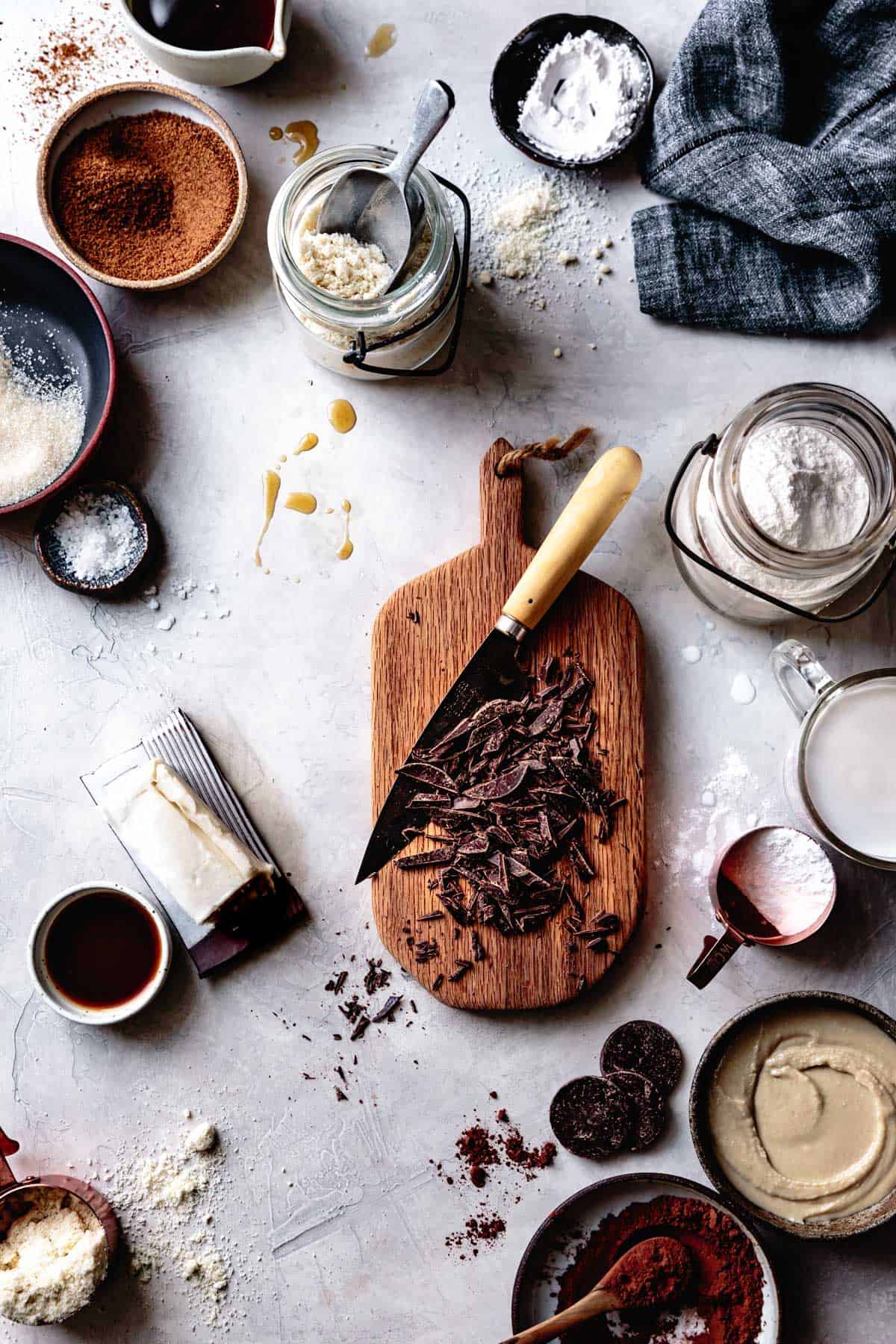 While making my book, I prioritized my life like so:

If you didn't fit into those three categories, I didn't see you for that year of my life.

Halfway through maniacally testing recipes for my book, it dawned on me that different flour brands grind their flours in different ways, and this affects the outcomes of recipes in a big way. I decided to standardize the recipes and test all that I could with Bob's Red Mill flours. This would have been a great point at which to ask my publisher for an extension as I had to go back and reformulate a handful of recipes I'd developed with random bulk-bin flours. But instead I soldiered on down the road to becoming a zombie shell of a person, albeit a well-fed one.

Though the process was grueling, I never lost my love for baking (though I did lose my sweet tooth for a good few months there). And while I don't know if or when I'll be ready to make another book, for now I'm thrilled to partner with Bob's Red Mill. This year I'll be bringing you a series of gluten free recipes featuring their gluten free flours and my favorite ways to use them. 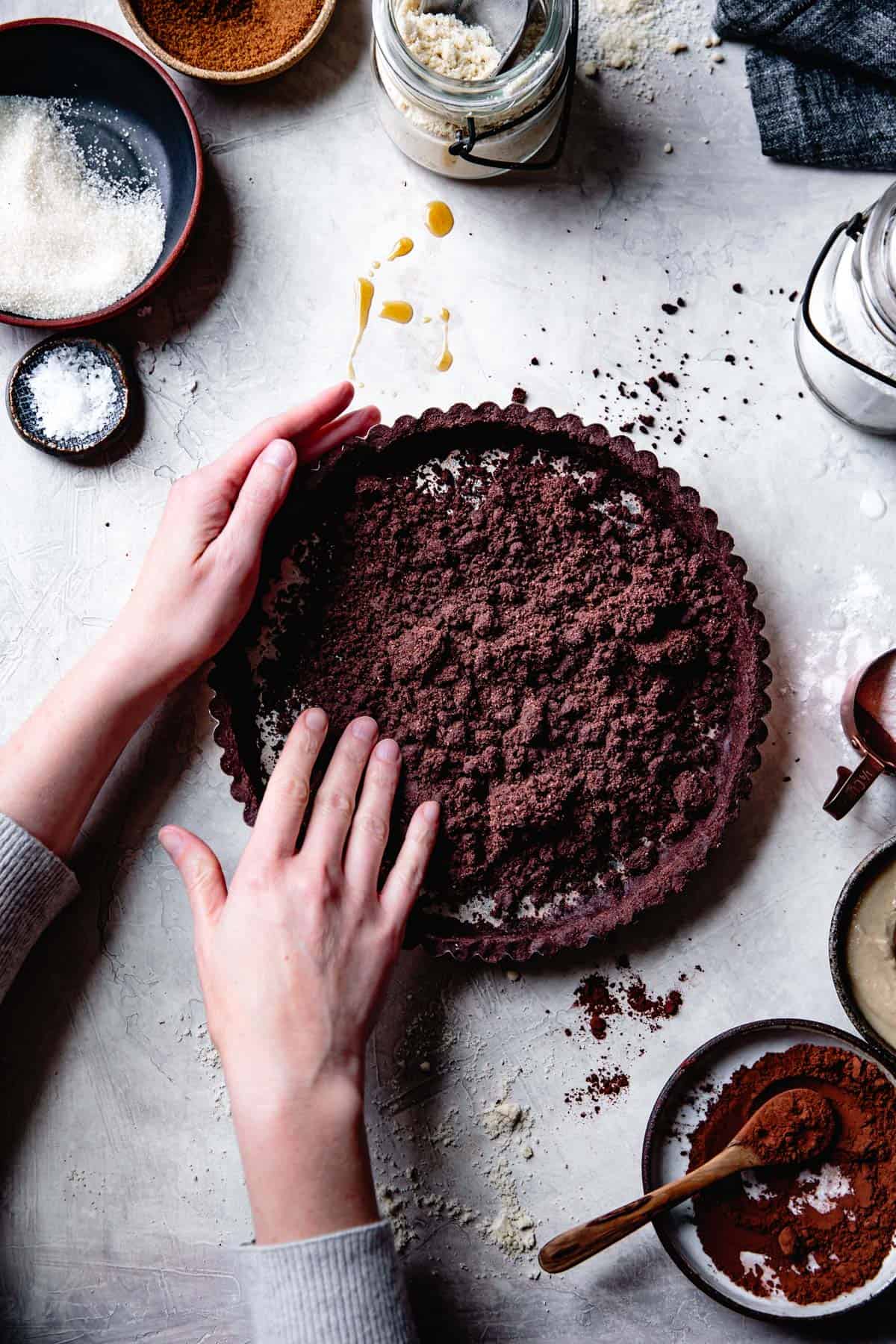 During this process, I got to know Bob's Red Mill flours very well. One of my favorites is their blanched almond flour, which is fairly finely ground with a bit of nubby texture. If you're wondering about the difference between almond meal and almond flour, in the case of Bob's, almond meal is made from almonds with their skins still on while the almond flour is made from blanched, skinless almonds. I generally prefer using blanched almond flour to meal, as its ivory hue makes for prettier baked goods but the two can usually be used interchangeably.

Since almond flour is naturally high in fat and protein, it produces tender baked goods that hold together well. I use Bob's blanched almond flour in many different gluten free baking recipes, including: 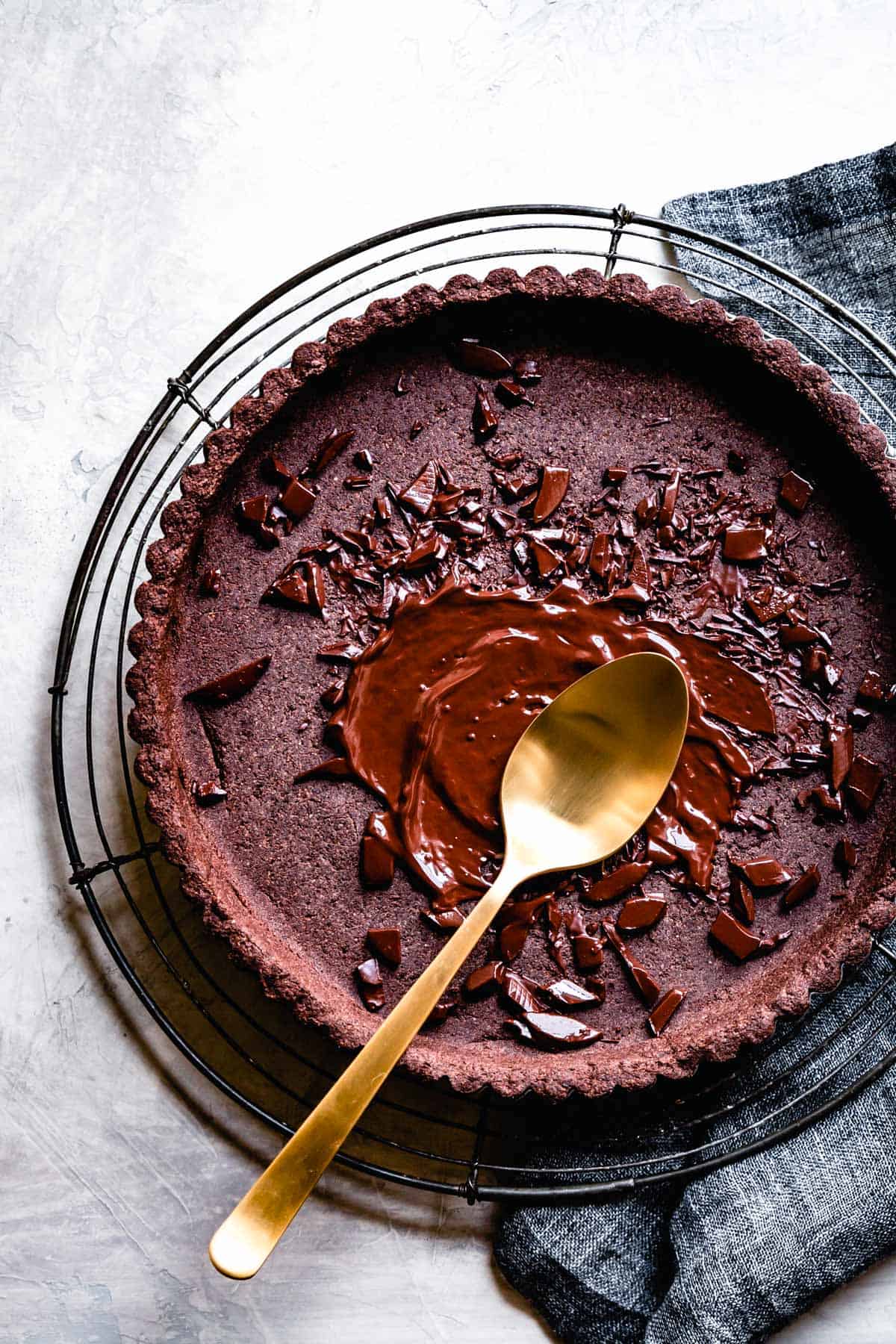 Almond flour helps to create an easy, press-in tart crust that tastes like shortbread cookies. When combined with sweet rice flour, tapioca flour, and a third flour – oat flour for a vanilla crust or, here, cocoa powder for a chocolate crust – along with sugar, salt, vanilla, and butter, it forms a crumbly dough. Just press this into a lightly greased tart pan, chill briefly, bake, and press down with the back of a spoon, and you have a no-fuss tart crust. While most traditional tart crust recipes have you soften the butter only to chill the dough, then roll it out and shape it, then chill again, then bake with pie weights, this crust comes together with much more ease.

No matter how exciting the filling is on any given tart that I make, the crust always gets the most comments! It's slightly sweet with a good dose of salt. The texture melts in your mouth just like a shortbread cookie. The chocolate version has a deep, dark cocoa flavor, perfect for chocolate lovers 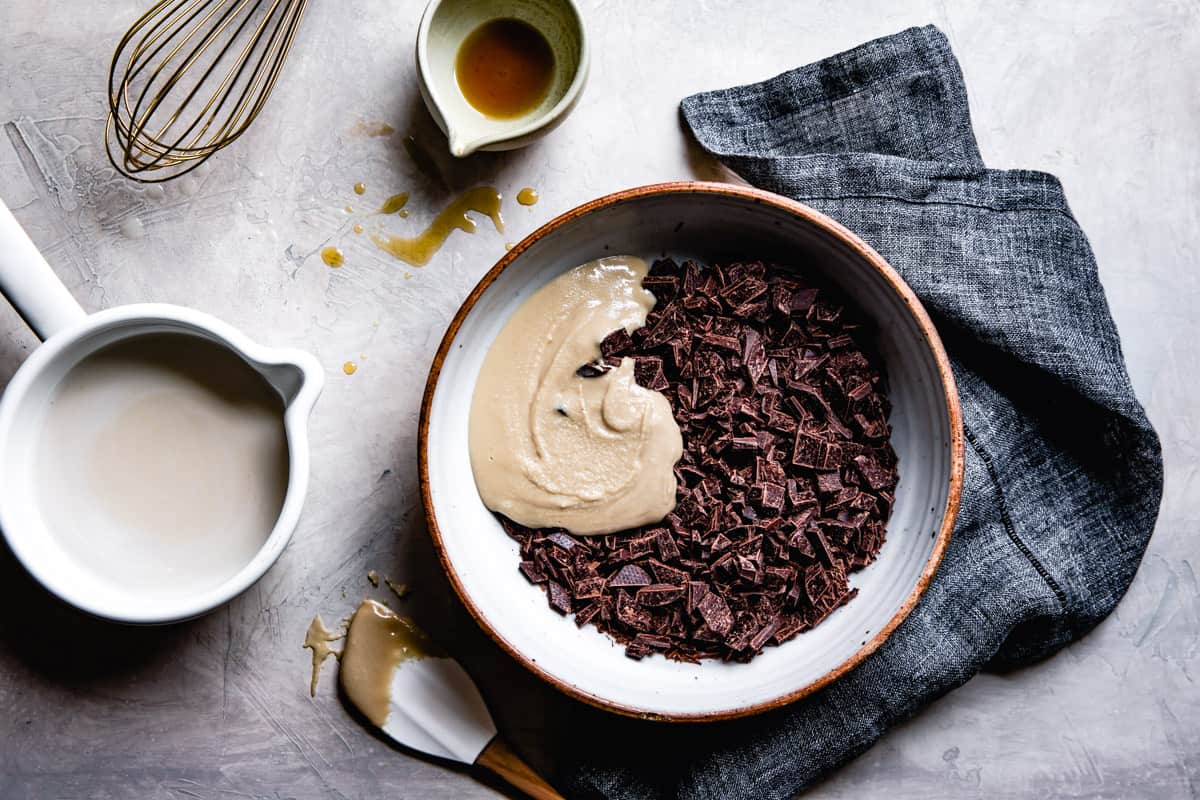 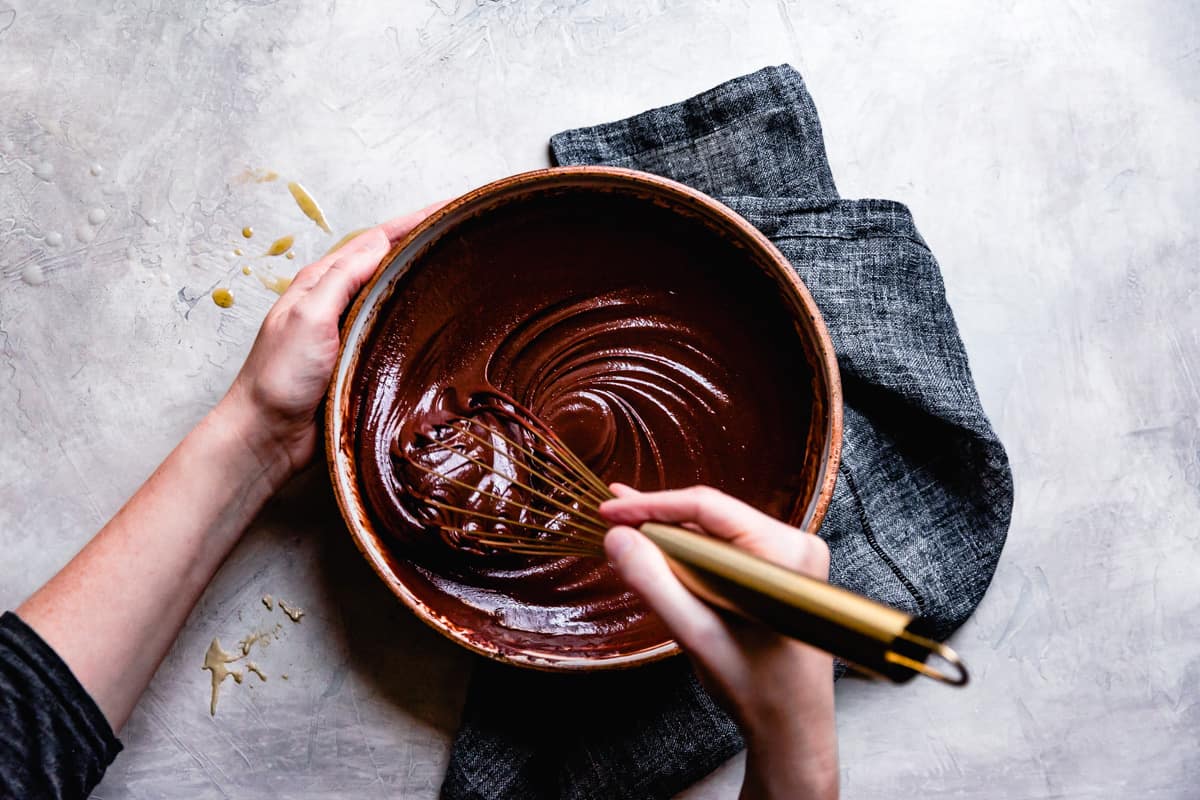 To make my gluten free almond flour crust vegan, I simply swap in vegan butter in place of dairy butter. I especially love Miyoko's cultured vegan butter, which is made from coconut and cashews. The culturing process gives it a rich, tangy flavor. 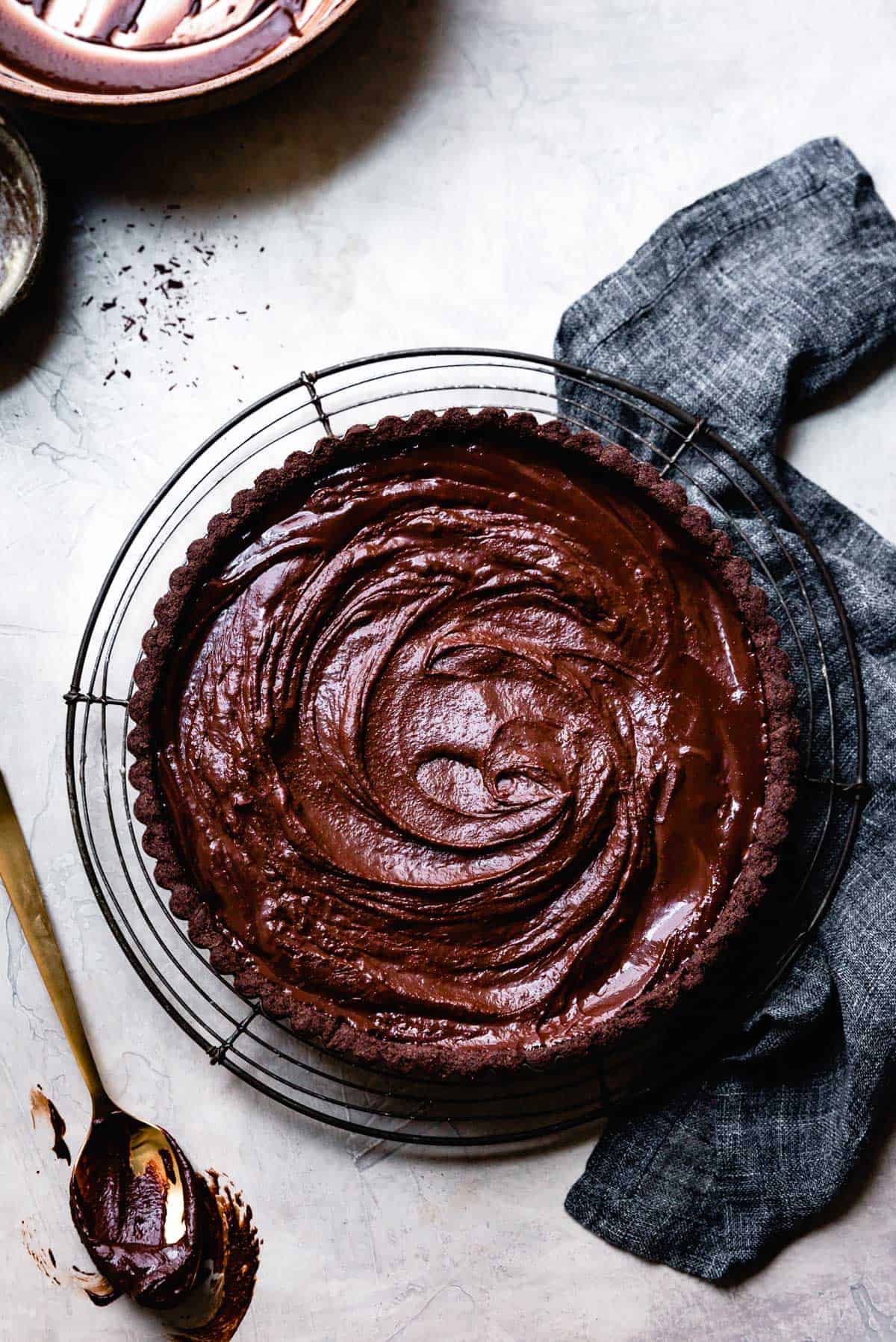 Bob's is! Almonds don't contain gluten, but at other processing plants, the nuts could be processed on equipment that also processes wheat. But you can rest assured that Bob's almond flour is always 100% gluten-free, and so are many of their other flours including their sweet rice and tapioca flours used here. 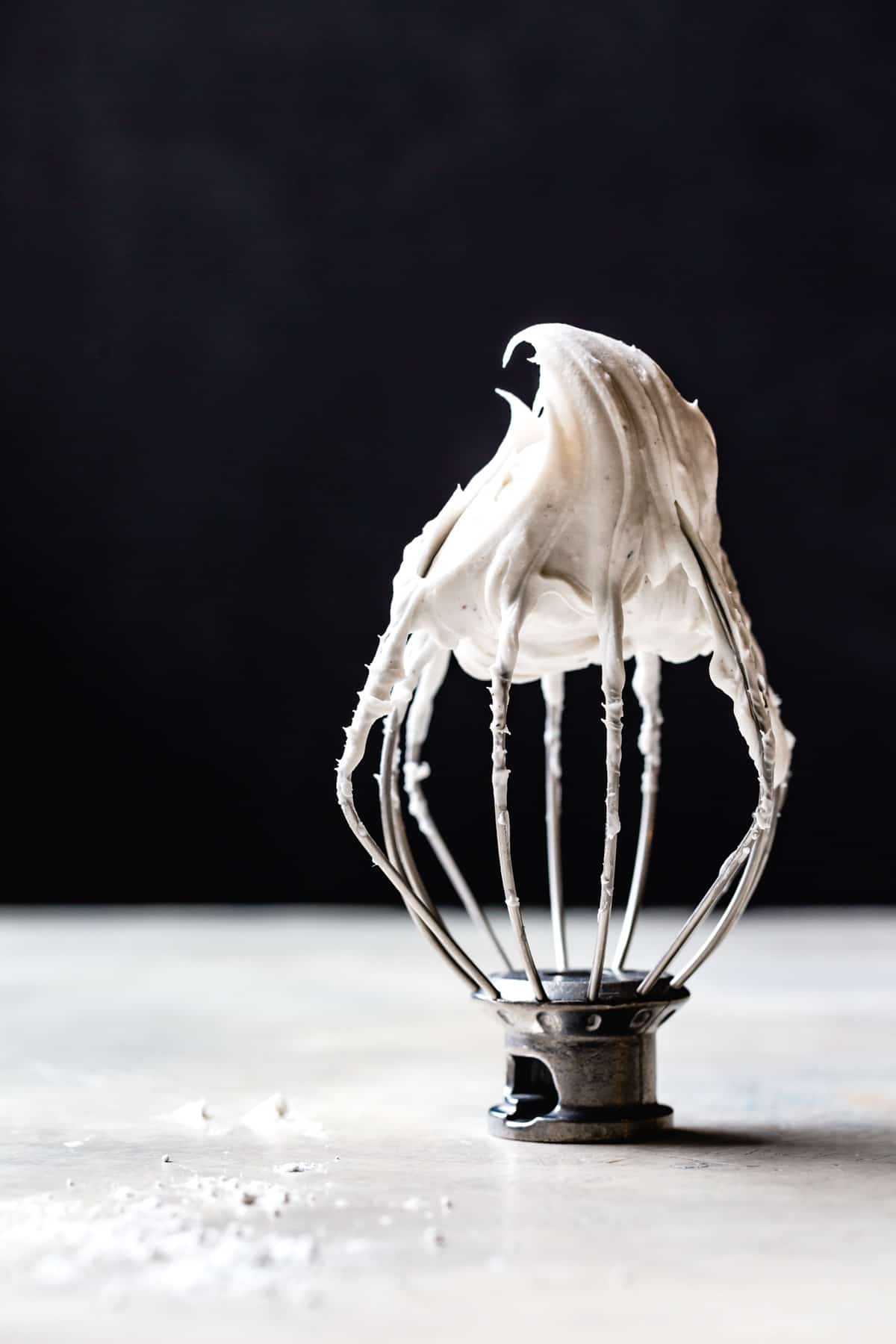 Aside from being DELICIOUS, this gluten free flour is high in nutrients such as: 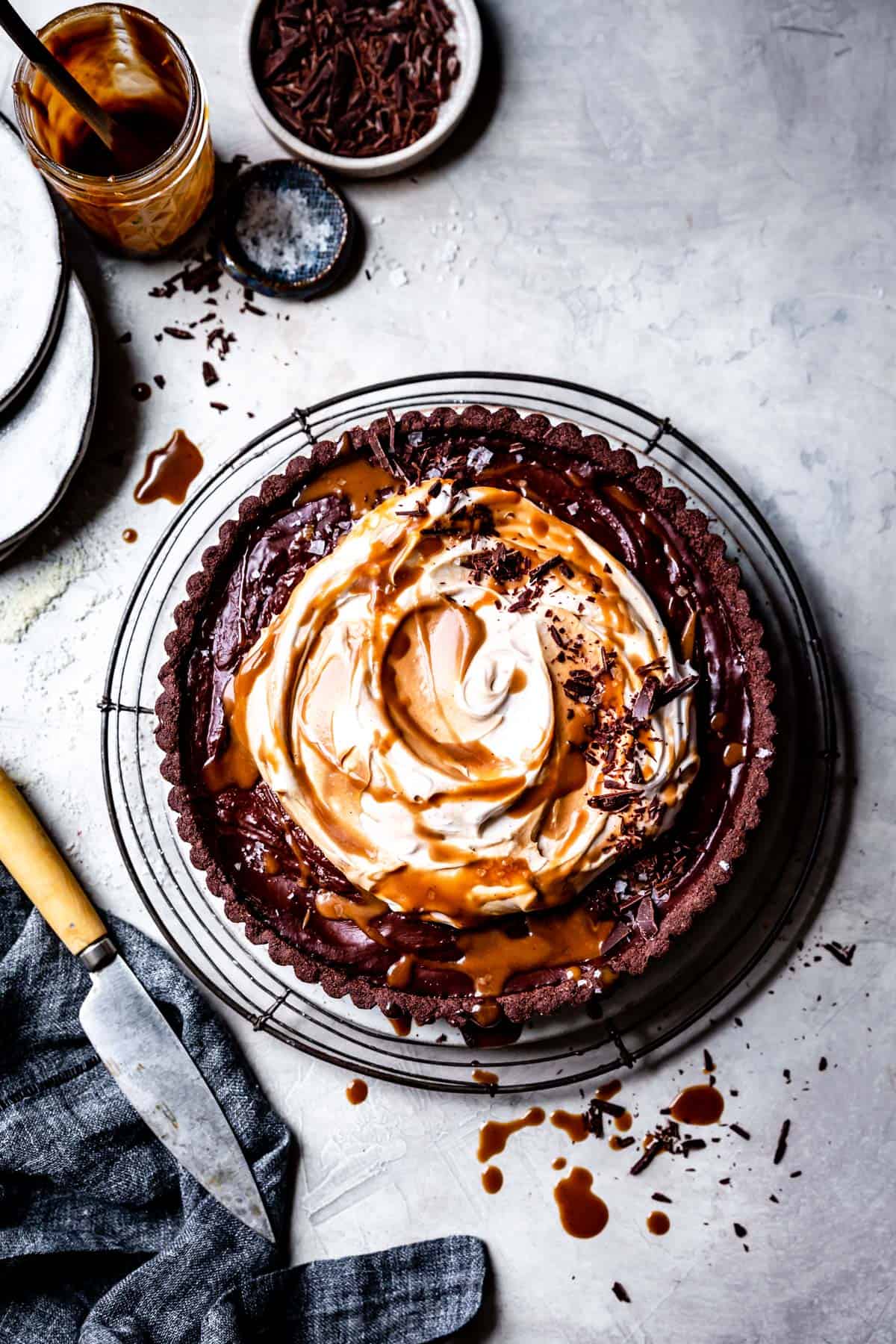 This tart filling is essentially a bittersweet chocolate truffle or vegan chocolate ganache. Hot coconut milk melts chopped chocolate, thickened with sesame tahini and sweetened with a touch of maple syrup. You can either pour the warm filling into the waiting crust for a smooth top, or let it cool until firm enough to hold a shape and swirl it into the crust for a bit of texture. 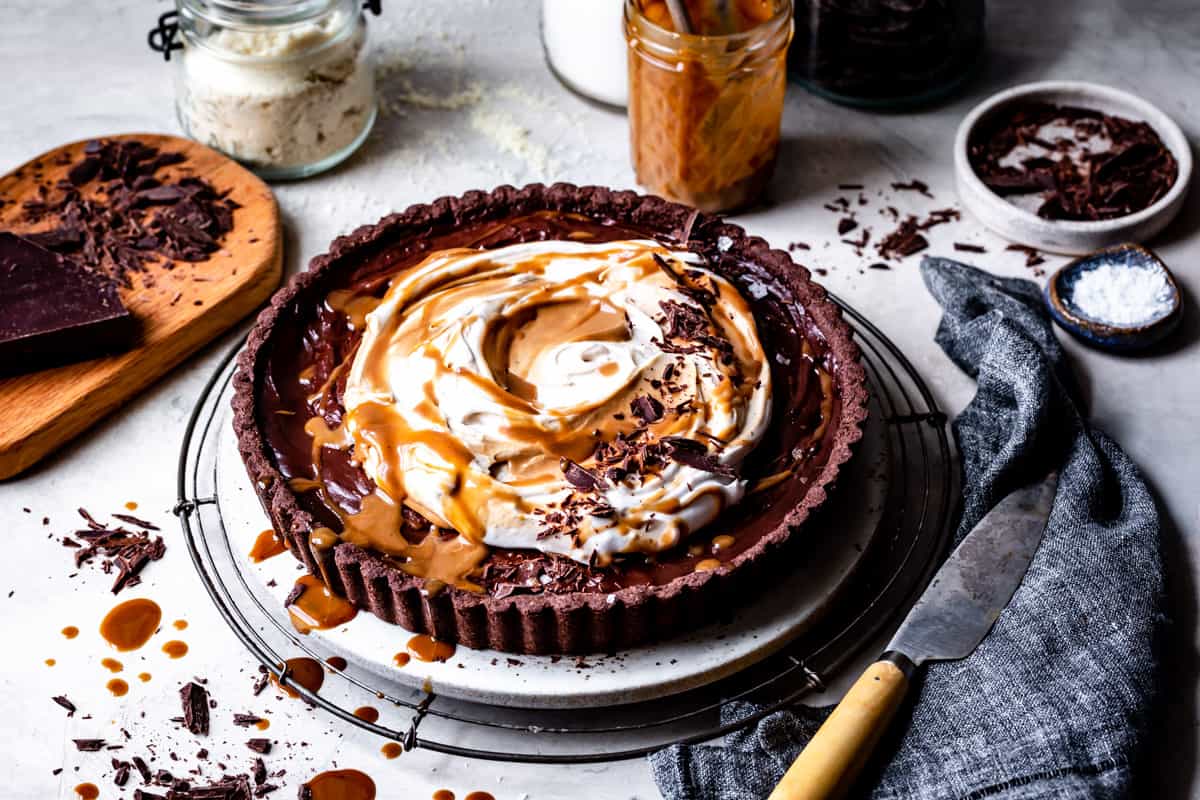 This tart is topped with a luscious vegan caramel sauce made extra thick from a spoonful of tahini. I've adapted the base recipe from Glow Pops by Liz Moody, which I previously used in these delicious vegan chocolate popsicles. Just combine coconut sugar and coconut milk, simmer until thick and darkened in color, and stir in tahini and vegan butter. You'll want to take a bath in the resulting vegan caramel sauce! 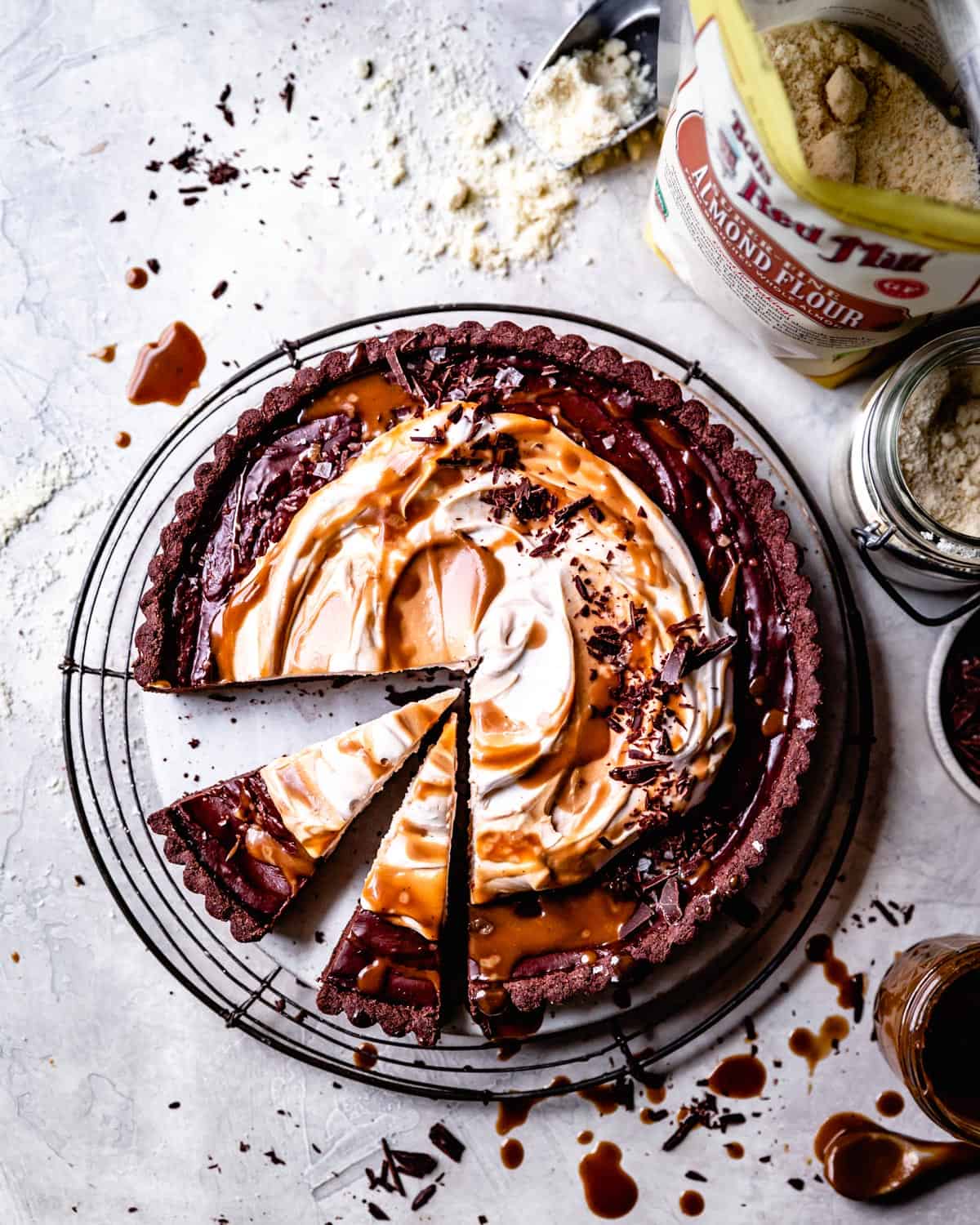 The icing on this, er, tart is a billow of whipped coconut cream. Be sure to chill the can overnight so the solids separate from the liquid, then whip the coconut cream with a touch of powdered sugar and vanilla until it holds firm peaks. 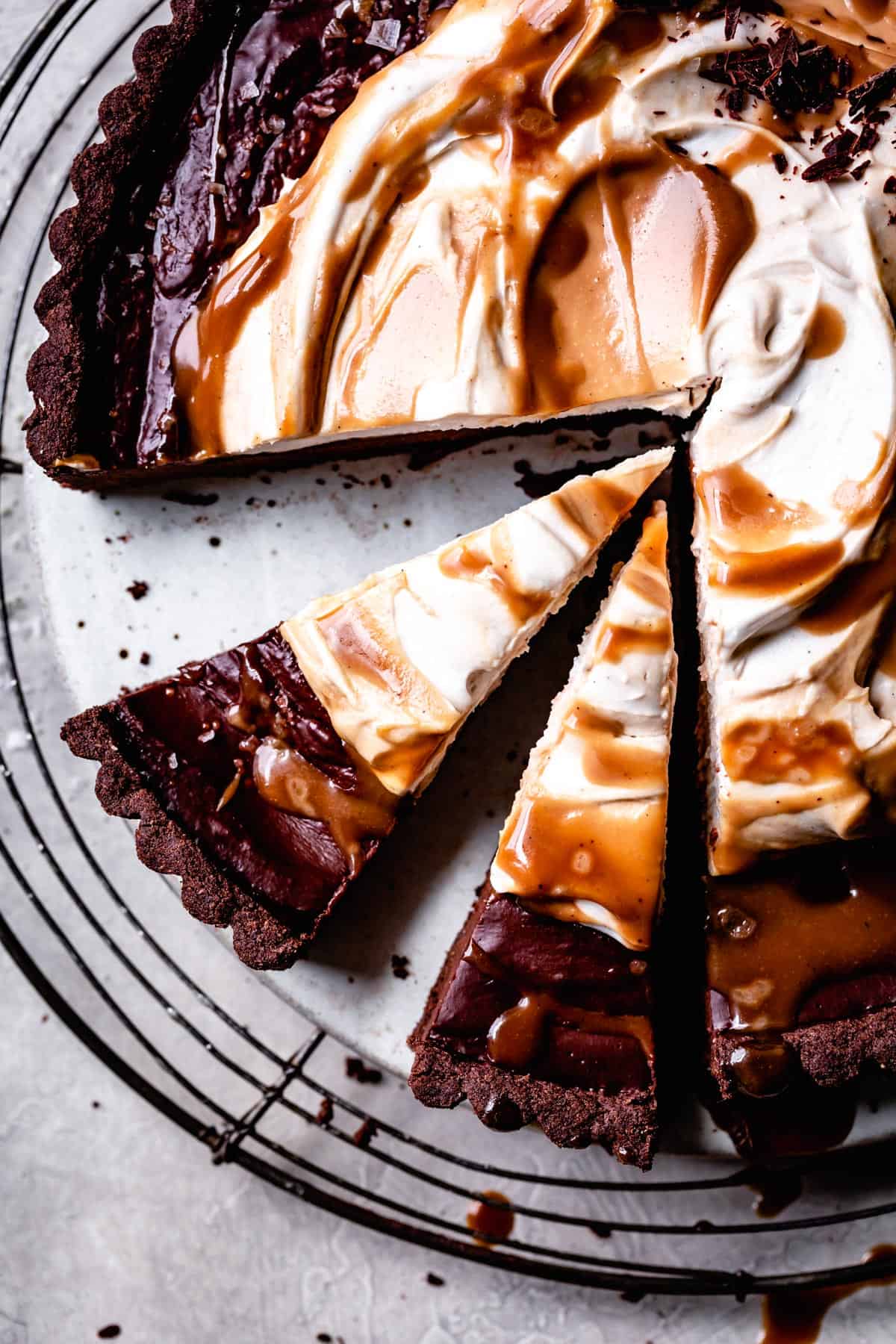 I like to make this dessert in a tart pan with a loose bottom, which makes the tart easy to slice and plate. But if you don't have one, turn this into a vegan chocolate pie by simply forming the crust in a pie pan and proceeding with the recipe. It may be a bit messier to remove the first few pieces from the pan, but it will still work beautifully! 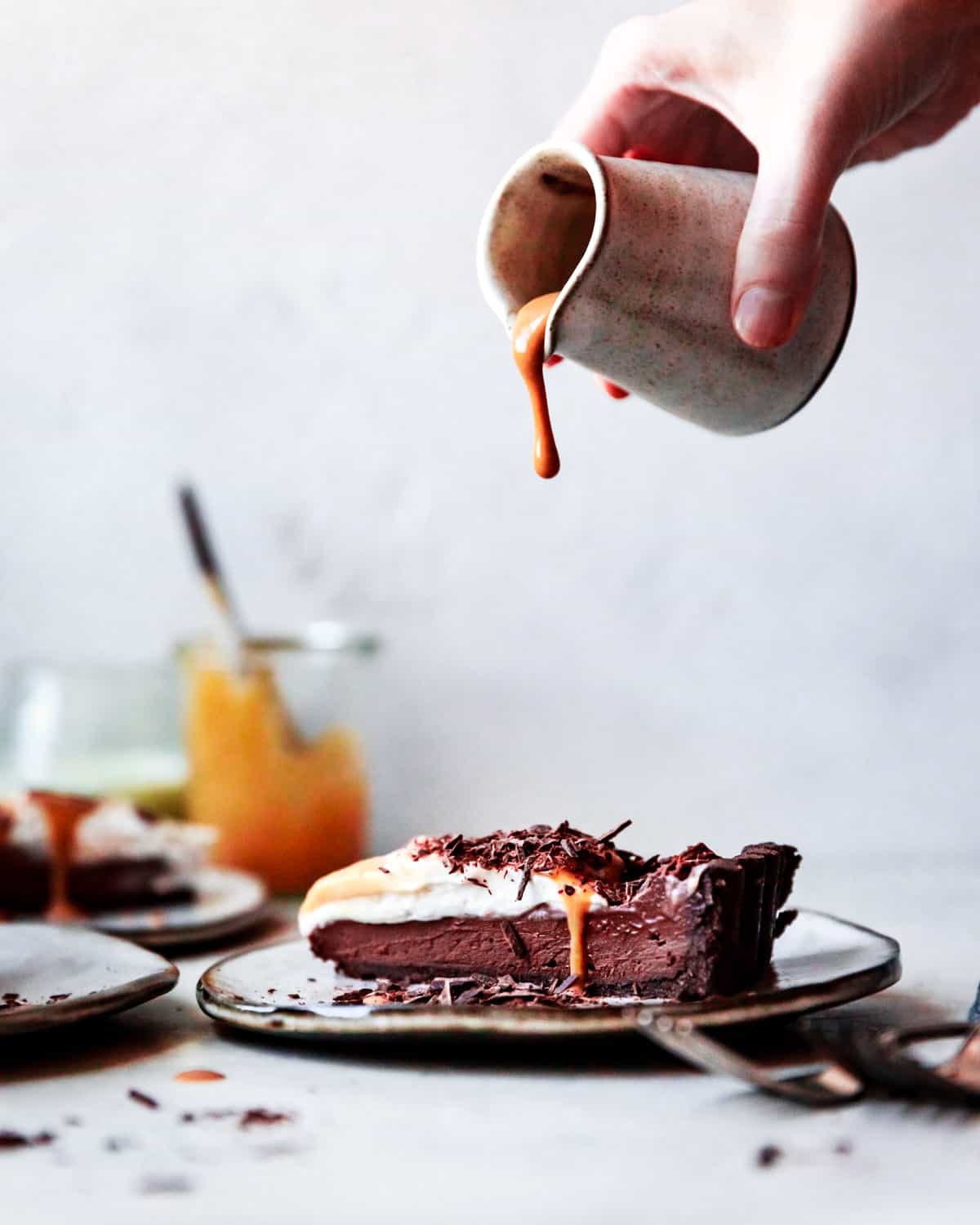 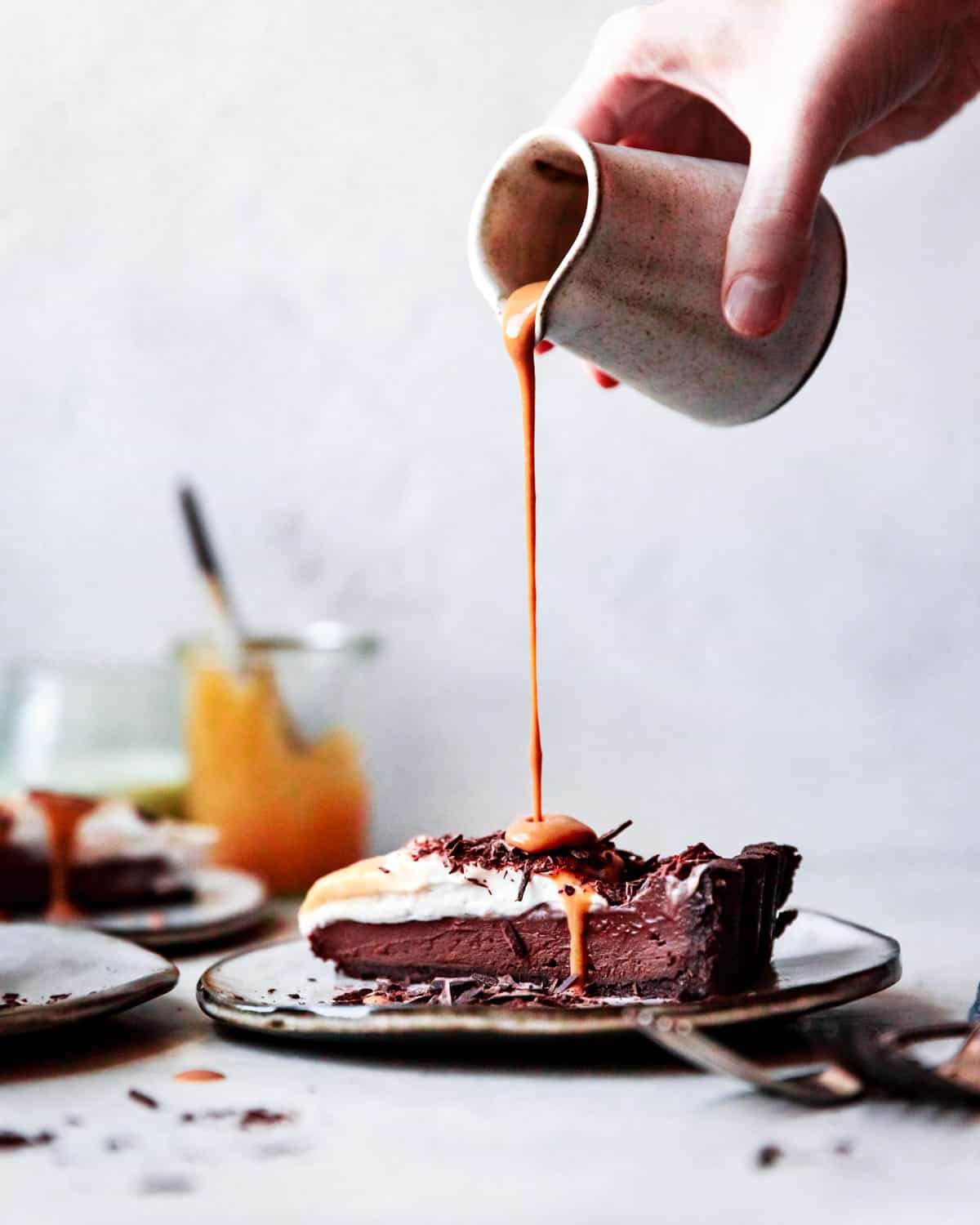 Looking for more chocolate? Here are a few other vegan & gluten free chocolate desserts to love. 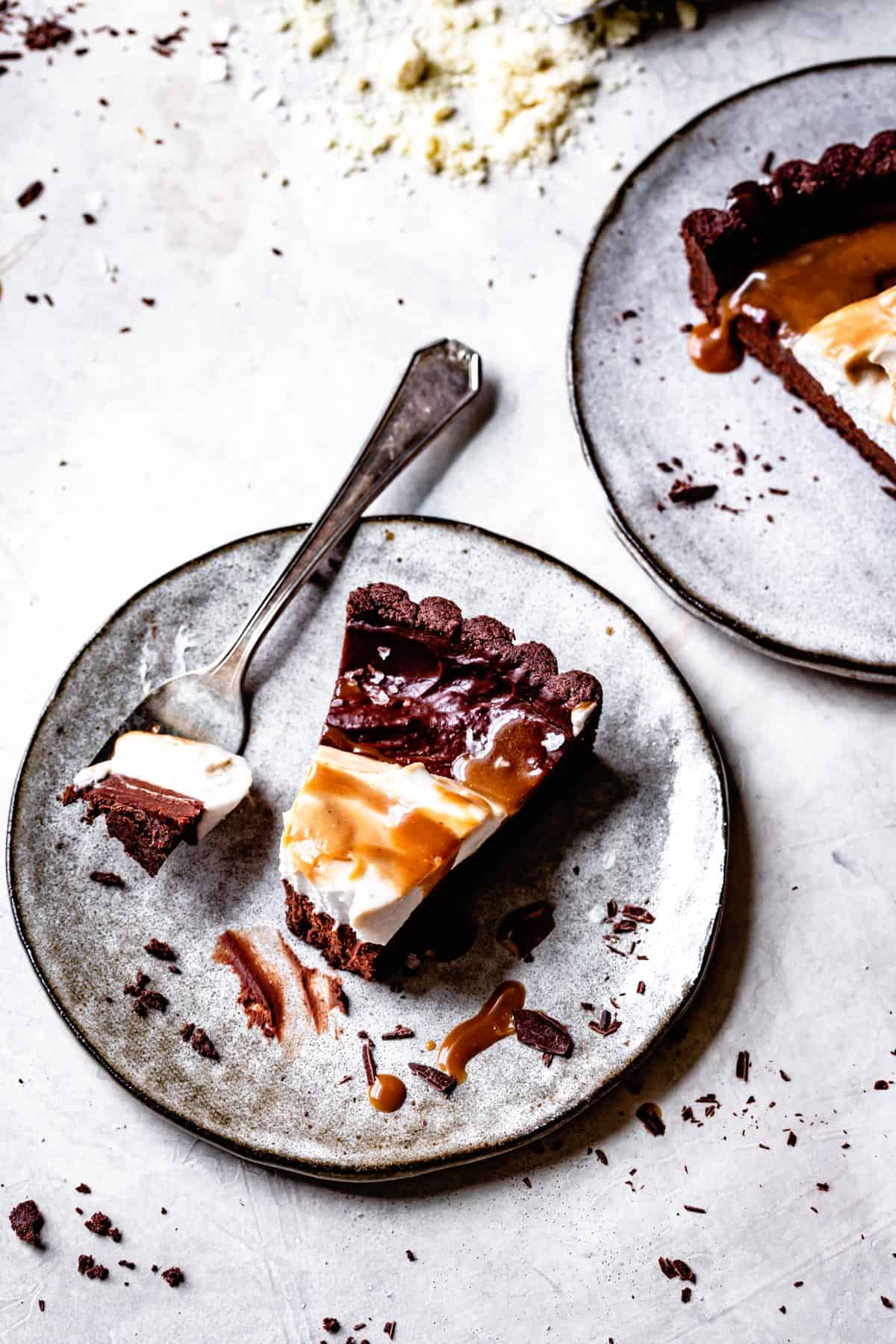 *Bojon appétit! For more Bojon Gourmet in your life, follow along on Instagram,  Facebook, or Pinterest, purchase my gluten-free cookbook Alternative Baker, or subscribe to receive new posts via email. And if you make this gluten free vegan chocolate tart, I’d love to see. Tag your Instagram snaps @The_Bojon_Gourmet  and  #bojongourmet.* 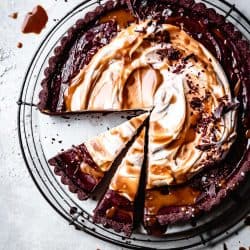 Make ahead: Nutritional values are based on one of twelve servings. 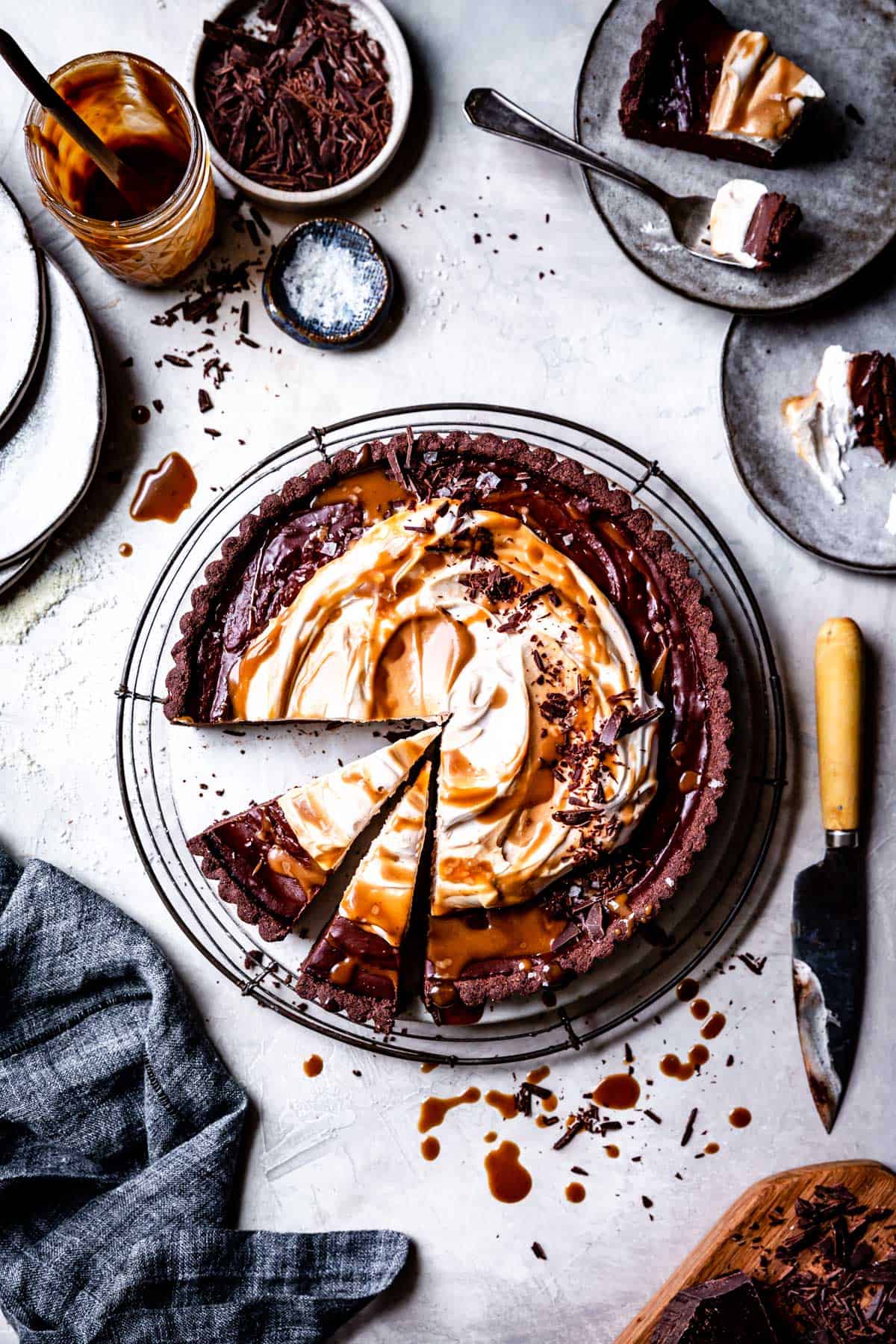