Pillow-soft banana cake gets a fine crumb from a blend of alternative flours (coconut, millet, and sweet rice) crowned with glossy coconut milk ganache kissed with a splash of dark rum. Gluten-free and optionally dairy-free.

The trickiest flour that I worked with while developing recipes for Alternative Baker was coconut flour. Made from dried, unsweetened coconut that has had a large amount of its fat removed, coconut flour is incredibly fibrous, dry, and THIRSTY. It drinks up liquid in recipes like a sponge, meaning that you need far less of it than you probably think. But when properly balanced with liquid ingredients, coconut flour can produce fluffy, moist, and meltingly tender baked goods. Like this cake.

The first cake I baked with coconut flour was an attempted variation of this GF chiffon cake and my first try went straight into the compost post-baking. Folding the whipped egg whites into the batter was akin to mixing cement, and the results tasted about the same. But I didn't give up on coconut flour, and the coconut flour recipes in the book turned out to be some of my favorites: Coconut Cream & Raspberry Tart, Triple Coconut Tres Leches Cake, and Cashew Lime Blondies.

When coconut flour's dry properties are properly harnessed, it can turn out feather-light baked goods with mild, sweet flavor. It's one of the few truly neutral-tasting flours, and it's also full of fiber, protein, and healthy fats.

I had another run-in with coconut flour while developing recipes for the coconut flour issue of my Alternative Baking column in GFF (Gluten-Free Forever) Magazine last spring. I wanted an easy banana coconut flour loaf studded with chocolate, and I decided to make it dairy-free and sweetened with coconut sugar. After testing 5 dense, heavy loaves that never fully baked through, I finally admitted defeat.

I found a more traditional banana cake recipe online, adapted it to use coconut flour, and it baked up light and fluffy on the first try. (I've since lost track of which recipe it was, so please let me know if it's similar to yours so I can give credit where it's due!) Though more involved, the results were well worth the extra effort of creaming butter and sugar, separating eggs, and folding in whipped egg whites. Unlike my super-healthy banana bread bricks, this version was gluten-free but used dairy as well as refined sugars. But the result was so perfectly luscious, I didn't want to change a thing.

I ended up developing a blondie recipe that was a better fit for the article (you can get the recipe in issue 11 via PDF download or snail mail) and I kept the banana cake under wraps.

When I saw Amanda's beautiful coconut ganache-slathered brownies last week, I remembered the banana cake. I baked it up as written to see if I still loved it as much as ever, and I did. But then I started thinking what a shame it was that the ganache was dairy-free but not the cake, and I decided to give it a go with Miyoko's Creamery Cultured Vegan Butter (I'M OBSESSED) and a mix of cashew yogurt and almond milk for the dairy. It worked like a charm. I'm happy to say that the dairy-free version is indistinguishable from the original, so I've included both options.

Coconut flour gives this banana cake a bit of pleasant texture – nothing as distracting as shredded coconut, but a bit more nuanced than your garden-variety AP flour based cake. Blended with sweet rice and millet flours, plus a bit of tapioca for extra softness, the cake bakes up light and springy with a meltingly tender texture. The flavor is slightly tropical thanks to ripe bananas, brown sugar, and a pour of vanilla extract, and a hit of rum in the ganache plays up that island flavor profile.

I'm on a bit of a banana dessert kick at the moment so I'm dreaming up some more variations of this cake... maybe a maple buckwheat version topped with whipped mascarpone, or a teff version topped with tahini buttercream. {UPDATE: I shared a version with cream cheese frosting & butterscotch} Jay also suggested folding some coarsely chopped chocolate into the cake batter for extra chocolate – I like the way he thinks.

Shout-out to my sweetest friend Amanda for the minimalist styling inspiration for these photos! You always make chocolate look glossy and delicious. <3

*Thanks for reading! For more Bojon Gourmet in your life, follow along on Instagram, Facebook, or Pinterest, purchase my gluten-free cookbook Alternative Baker, or subscribe to receive new posts via email. And if you make this coconut flour banana cake, I’d love to see! Tag your Instagram snaps @The_Bojon_Gourmet and  #bojongourmet.* 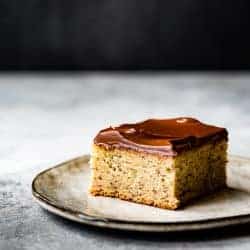 I adapted this recipe from one I found online and unfortunately I can’t recall which one! If it’s similar to yours please let me know so I can properly credit you! If dairy isn’t an issue, you can make this with dairy butter, and replace the yogurt and almond milk with buttermilk or yogurt thinned with milk. Just a heads up that you’ll need to whip the egg whites after you’ve made the rest of the batter. I like to stir the batter by hand in a large bowl and save my stand mixer bowl for whipping the egg whites. Alternatively, you can use an electric egg beater. Take care not to contaminate the egg whites with any other ingredients aside from the sugar as it will prevent them from whipping up. If you’re looking for a way to use up the extra coconut milk, try this Green Noodle Soup with Coconut Lemongrass Broth. Nutritional values are based on one of twelve servings.