A bourbon and yellow chartreuse cocktail that gin drinkers will love too. This drink is bright, herbaceous, and boozy with notes of smoke and spice. Adapted with permission from The Daisy in New York City.

This morning I woke up from an anxiety dream in which I was in a New York City elevator trying to get to the 45th floor, but because it was such a tall building, instead of the regular buttons going up to 100+, it only had buttons from 1-9 that you had to push in sequence. I was trapped in the elevator going up and down, up and down, until a kind soul entered and showed me the way out. Was this dream a metaphor for my life?

Perhaps. It wasn't until I shot (and drank too many of) these cocktails this afternoon that I remembered getting trapped in the confusing elevator at the New York Times building when I visited last month during a two-week trip to the East Coast. It probably didn't help that I'd drunk a few delicious cocktails the night before at The Daisy. Turns out NYC is a good town for cocktails; elevator systems, not so much.

Until this spring, the most time I'd spent on the East Coast was during a trip to Nantucket one summer. I'm not sure why it took me so long to make my way across the country, but now that I've been, I can't wait to get back.

Jay and I headed to Washington DC for the Climate March in late April. Our friends generously put us up at the Park Hyatt Washington, which I cannot recommend highly enough. The decor is minimal and replete with natural fibers, the restaurant serves delectable seasonal fare, and they pay attention to all the little details. Coming back to our cool room after a day in the city felt like a sanctuary. We enjoyed a sumptuous Indian meal at Rasika, a foodie extravaganza at Kinship, and fell hard for the veggie sushi burritos at Buredo.

I met my longtime internet friend Jen from Savory Simple, whose book The Gourmet Kitchen (and the tahini frosted brownies from it) I hold dear to my heart. The climate march took place, appropriately enough, during a rogue heatwave, and though the packed streets felt like a sauna in 90º heat and high humidity, it was pretty empowering to march with 200,000 activists chanting "shame, shame, shame" all the way to the white house. If only I'd had an icy cold yellow chartreuse cocktail! More on those later...

We reluctantly checked out of our beautiful hotel and boarded the Acela to upstate New York where our friend Janet shuttled us to her family's home in Massachusetts. Janet tested a slew of recipes for Alternative Baker when it was in process, and we became friends through emailing about baking, politics, and life. She and her family showed us around the Berkshires and, with the help of Alana and several other friends, threw an Alternative Baker cookbook party.

We baked a bunch of recipes from the book – from Berry Chèvre Cheesecake Bars to Pumpkin Nut and Seed Bread to Double Chocolate Buckwheat Cookies – and shared them with local foodie friends who nerded out on alternative flours with us. It was one of the sweetest things anyone's ever done for me, and it left my heart (and belly) so happy and full.

We fell hard for the Berkshires' rolling hills, blossoming trees, and a dog named Sylvester, who is essentially the lap cat I've always wanted in canine form. Janet fed us creamy braised endives, homegrown asparagus, local skyr, and hand brewed kombucha, then she put us on a train headed toward NYC with a care package of the most divine chocolate pudding I've ever tasted. (The recipe is in her brand new book Extra Helping and I've shared it here!) If you love smart, heartfelt writing about food that will make you feel all the things, hop over to Janet's site and pick up a copy of her book – and keep the kleenex nearby.

It was a rude awakening to disembark the train in Harlem after the peaceful greenery of the Berkshires. "What have we done?" I thought as we endured a harrowing cab ride through the city and to a grimey hotel on the Upper East Side that cost a small fortune. But we braved the subway and met some old friends for microbrews, fried brussels sprouts, and veggie burgers at Cask, then took a magical stroll on the High Line. A classical guitarist played bossa nova as we waited for our train back to the unfortunate hotel, and shakshuka and mint tea greeted us for breakfast the next morning at Mellow Yellow Coffee & Vibes.

My sister flew in that morning and we met for a lunch of laksa and stir fry at Vietnaam, then, after a day of walking around, met my niece and Emilie for dinner at her husband's restaurant Sfoglia. Over glasses of Francicorta sparkling rosé we tasted practically every dish on the menu, beginning with burrata over greens and tiny sweet peppers, plowing through a dish of creamy (gluten-free for us!) pasta, and ending with a chocolate hazelnut semifreddo that I'm pretty sure descended from heaven, and a rosemary-kissed cake. It was one of my favorite ever meals shared with three of the loveliest ladies I know.

The next four days were a blur of good food, friends, and family. There was pie at Four and Twenty Blackbirds with Yossy, Sam, and Jenny. There were singapore noodles at Hey Hey Canteen. There was perfectly cooked salmon and grilled summer veggies at The Mermaid Inn, tacos and palomas at Tacombi, and lavender ube ice cream at Soft Swerve. I explored Food52 headquarters and met the man who made my Hippie Crispies look so good, my photography idol James Ransom.

I met my people at The New York Times food section, for whom I style food from California, and took a tour of the (gigantic, intimidating) building and anxiety dream-inducing elevator. I then strolled through Central Park at dusk with my family. We saw Waitress with Sara Bareilles and got inspired to bake all the pie and write a musical. The only thing I failed to find was a decent smoothie (so if you know anywhere in NYC, let me know for next time!)

I didn't expect to love the East Coast quite so much, and now I'm plotting my next trip. If you have suggestions of places to go, let me know in the comments!

But the treat that stuck in my head the most (besides Janet's chocolate pudding which I've been making on repeat) was a bourbon and yellow chartreuse cocktail from The Daisy called Honey & Hearth. I didn't order it, but my niece did, and after I'd taken a sip, I wished I had. It was a bourbon drink but it tasted more like gin – bright, herbaceous, balanced, and almost refreshing, but smokey and spicy at the same time. "What IS this?!" I asked, and the mixologist, Ian, generously shared the recipe with me.

How to Drink Yellow Chartreuse

Not gonna lie: I bought a bottle of yellow chartreuse just for this recipe. It is that good. However, yellow chartreuse can be drunk very cold, or over ice, as an after-dinner tipple. It also adds big flavor in cocktails, and it pairs well with gin and vodka.

But I only ever use yellow chartreuse to make this delicious drink. Feather-light bourbon aged in port barrels, appropriately named Angel's Envy and decorated with angel wings on the bottle, melds with fresh lemon juice, yellow chartreuse, and ginger liqueur, all served up over ice. The coup de grace is a smoking cinnamon stick which you can either extinguish in the drink itself for a smoky kick, or stick it ember-up in your drink and inhale the scent of Christmas-time campfire as you sip. I couldn't decide with brand of ginger liqueur to buy so I made my own, adapted only slightly from Serious Eats.

This herbal spirit has been made by Carthusian monks for centuries and uses 130 (!) different ingredients. It's a sweeter, milder version of its sibling green chartreuse (which also makes delicious cocktails.) Sweet, spicy, and herbaceous, yellow chartreuse is hugely flavorful with notes of honey, cardamom, anise, sage, and thyme. Though usually drunk cold, the flavor is warming and cozy.

Where to buy yellow chartreuse

Look for yellow chartreuse in well-stocked liquor stores, or order it online from K&L Wines.

And if you love amazing music and whimsical food-and-drink-themed videos, check out this gem that my friend Italian singer-songwriter L'Aura just released appropriately titled I'm an Alcoholic. It's about as addictive as one of these drinks.

*Thanks for reading! For more Bojon Gourmet in your life, follow along on Instagram, Facebook, or Pinterest, purchase my gluten-free cookbook Alternative Baker, or subscribe to receive new posts via email. And if you make this honey and hearth cocktail, I’d love to see! Tag your Instagram snaps @The_Bojon_Gourmet and  #bojongourmet.* 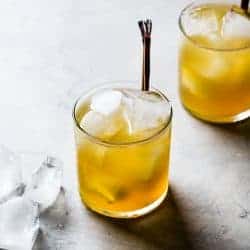 Feel free to use a store bought ginger liqueur, or give yourself a few days to make my version, below - it's shockingly easy and fiery good. Adapted with permission from Ian Kearney of The Daisy in NYC. You can order smallish bottles of yellow chartreuse and Angel's Envy bourbon from K&L Wines in San Francisco. Angel's Envy is a particularly light, bright tasting bourbon that works well in this drink, but feel free to trade in the bourbon of your choice if you don't have any on hand. Nutritional values are based on one drink.

Print Recipe  /  Pin Recipe
I made this with lemon peel instead of orange and vodka instead of brandy as I thought it would complement the flavors of the Honey & Hearth cocktail best, but feel free to try the original if you prefer; I think either would be delicious. Give yourself a few days to make this; most of the time is inactive. Adapted lightly from Serious Eats.
Prep: 10 minutes
Cook: 30 minutes
Resting Time: 3 days
Servings: 16 servings
Author: Alanna Taylor-Tobin