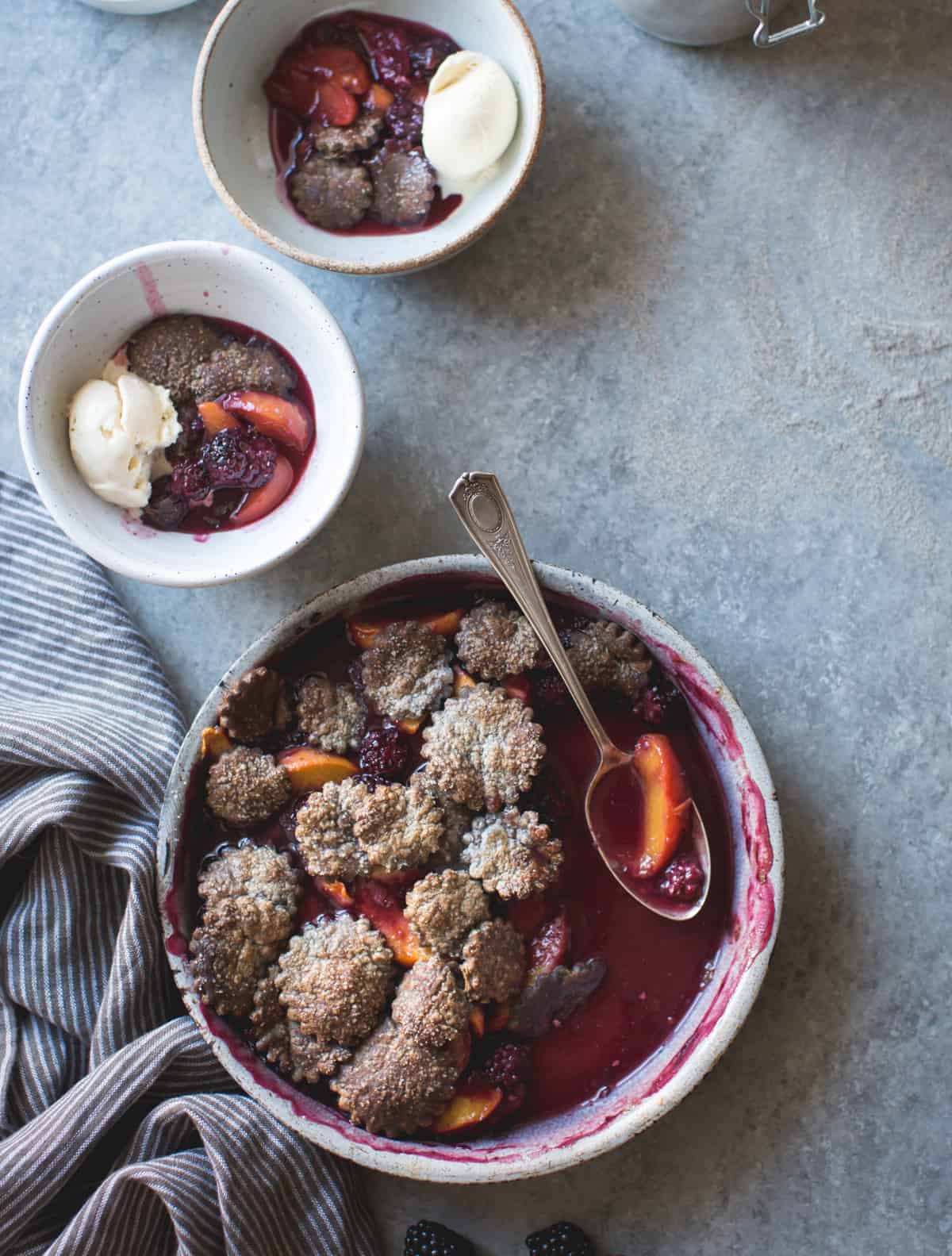 It's the one month countdown to the release of Alternative Baker! (And if you haven't pre-ordered a copy yet, you can do so at Amazon, Barnes and Noble, your local bookstore, or wherever books are sold.) In the meantime, I wanted to share a favorite summer fruit dessert adapted from the book. 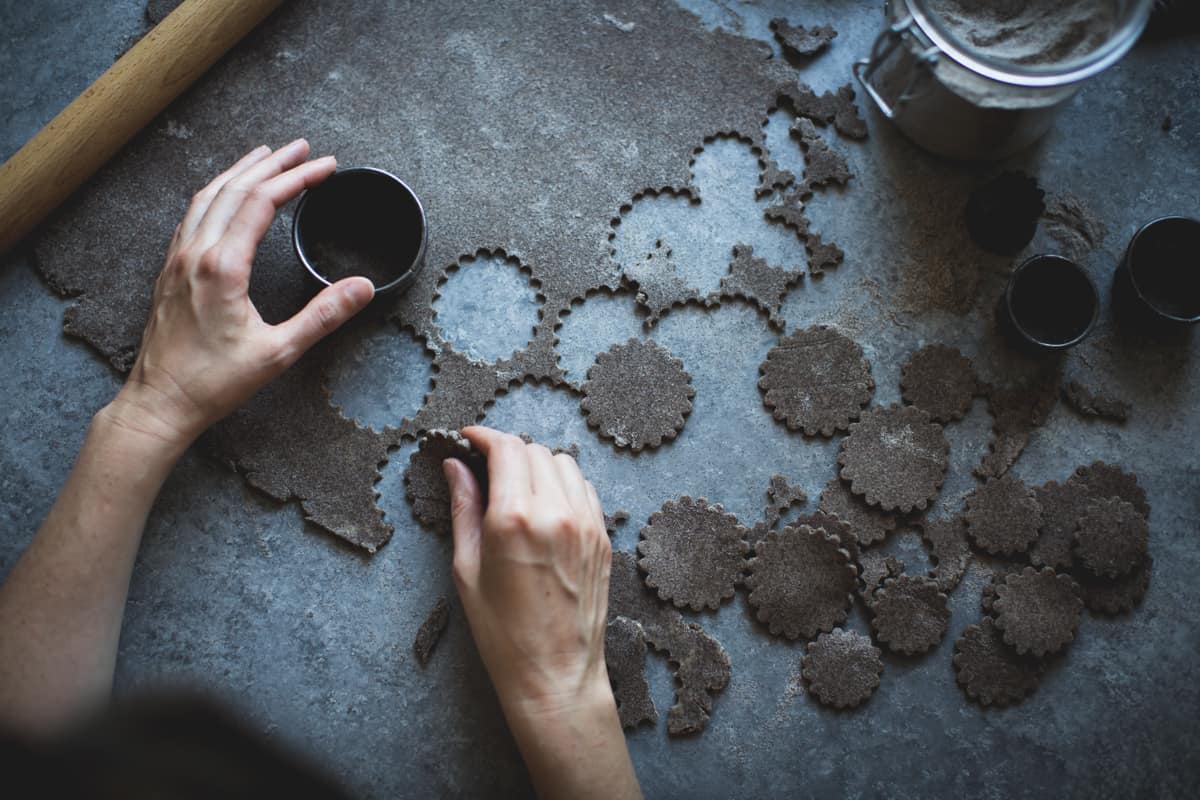 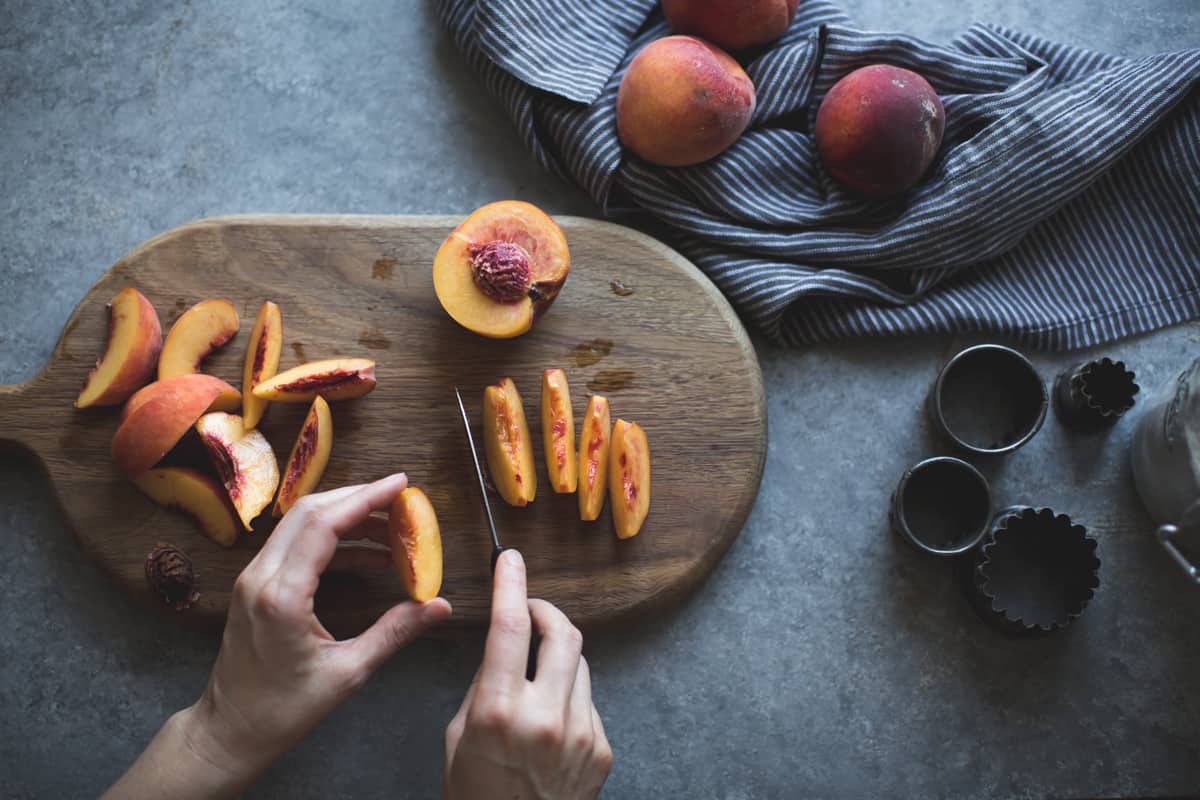 Pandowdy is one of those shapeshifting, old-school desserts that can take on a number of forms. Traditionally, you lay a slab of dough atop a dish of fruit, give it a bake, then score the dough into squares and partially submerge it in the fruit while it bakes some more. As the canny folks at America's Test Kitchen and Martha Stewart noticed, this technique often leads to soggy crust and steamed fruit. Cutting the dough into pretty shapes and laying it over the dough with lots of windows to let steam escape allows the fruit to condense and thicken and keeps the crust crisp. 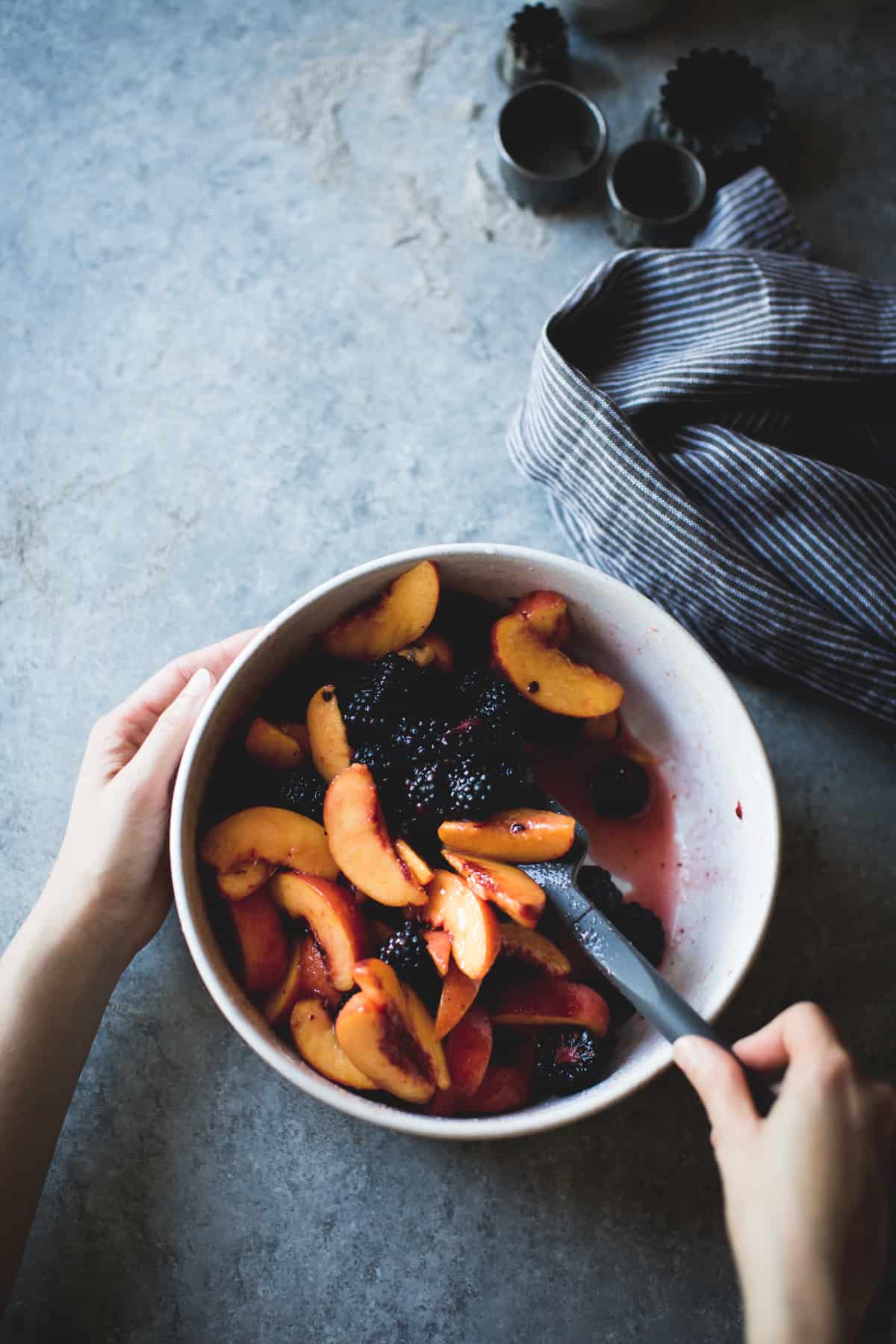 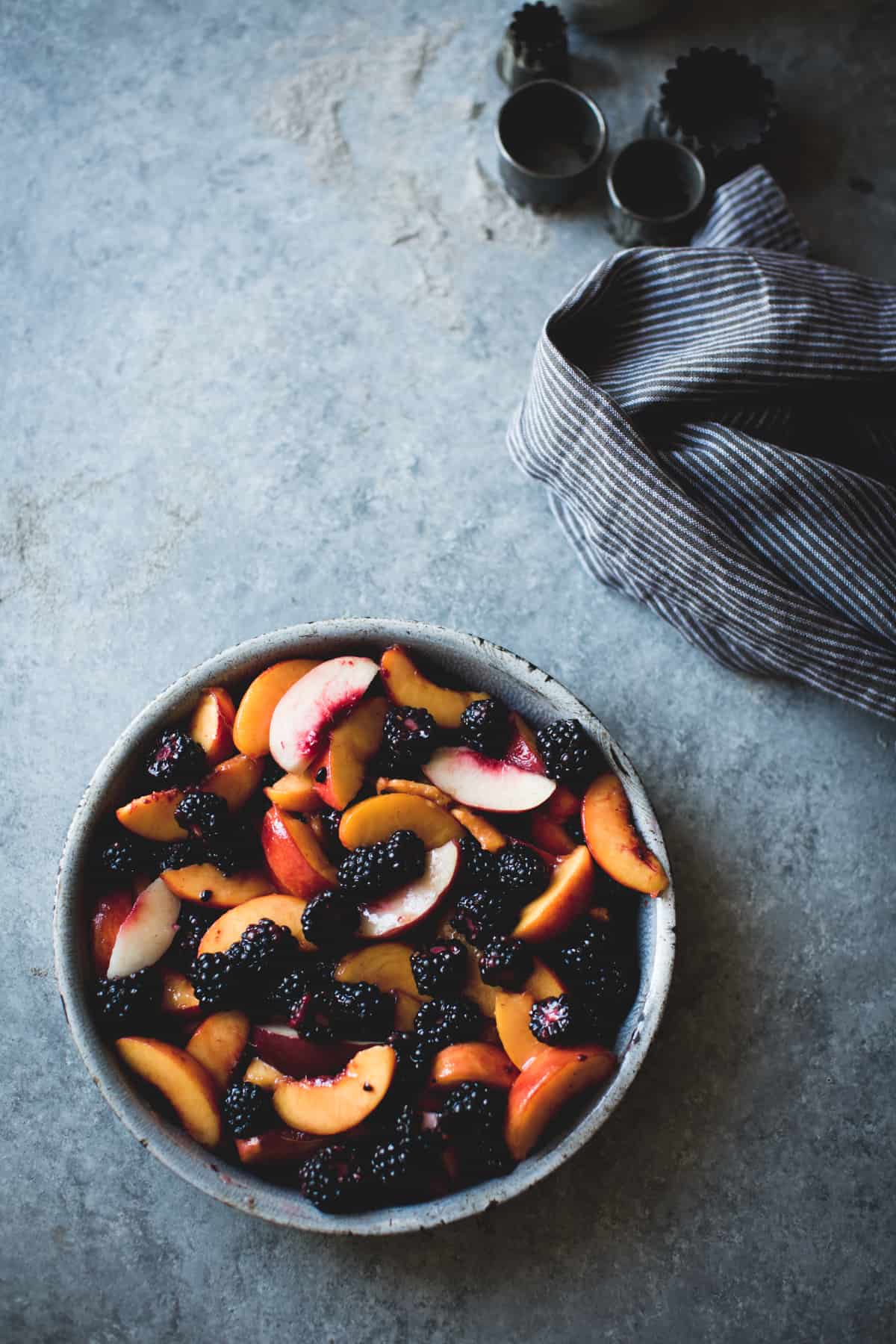 This type of pandowdy is essentially a pie without the fuss of a bottom crust, or a cobbler with pie dough on top instead of biscuits. It's a perfect use for my gluten-free pie dough, which is a bit more brittle than a wheat-based dough but bakes up every bit as crisp and flaky. It's loaded with whole grain flours and uses ground chia seed to help hold it together. I have a few versions in Alternative Baker, and this one, made with charcoal-hued buckwheat flour, is a favorite. 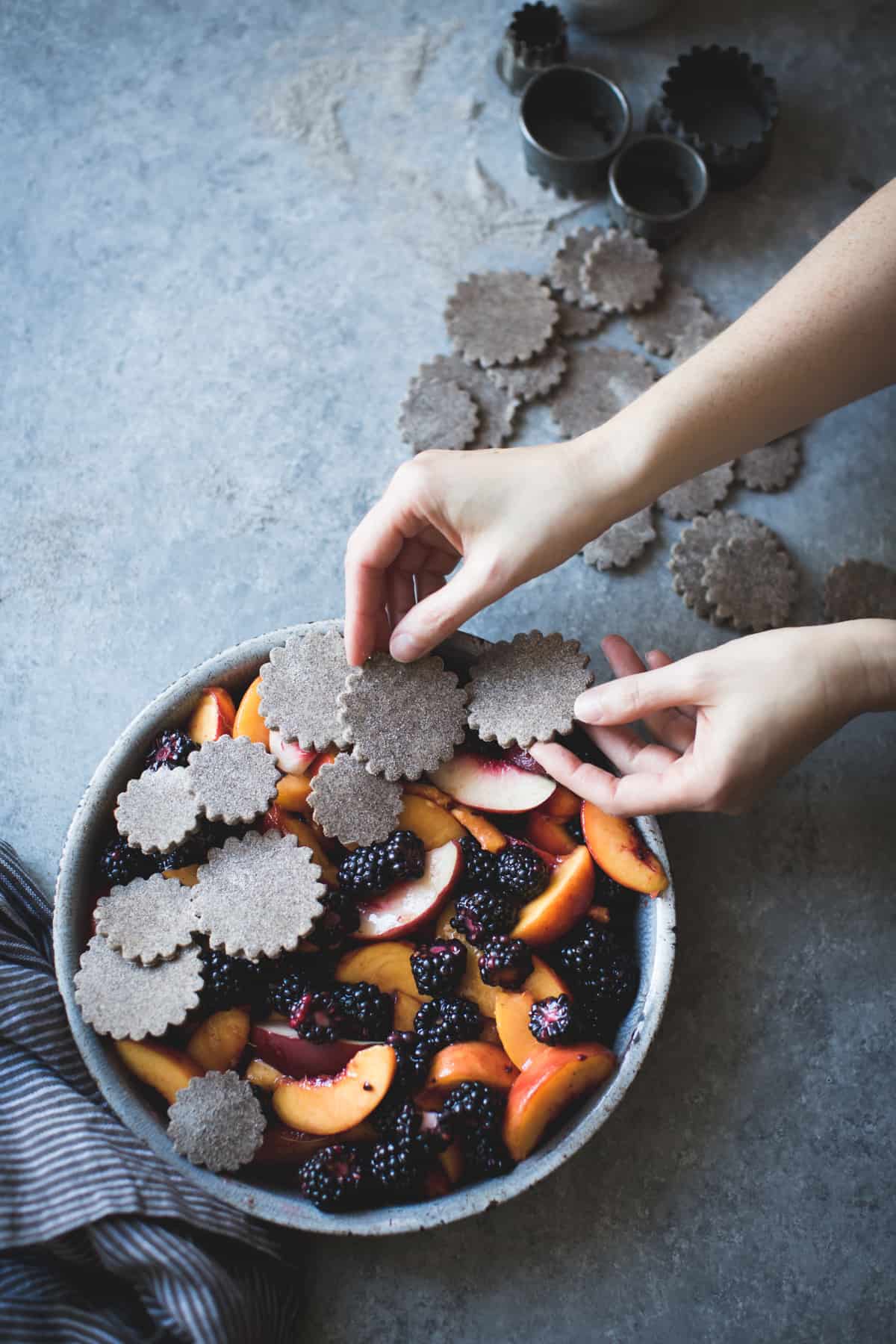 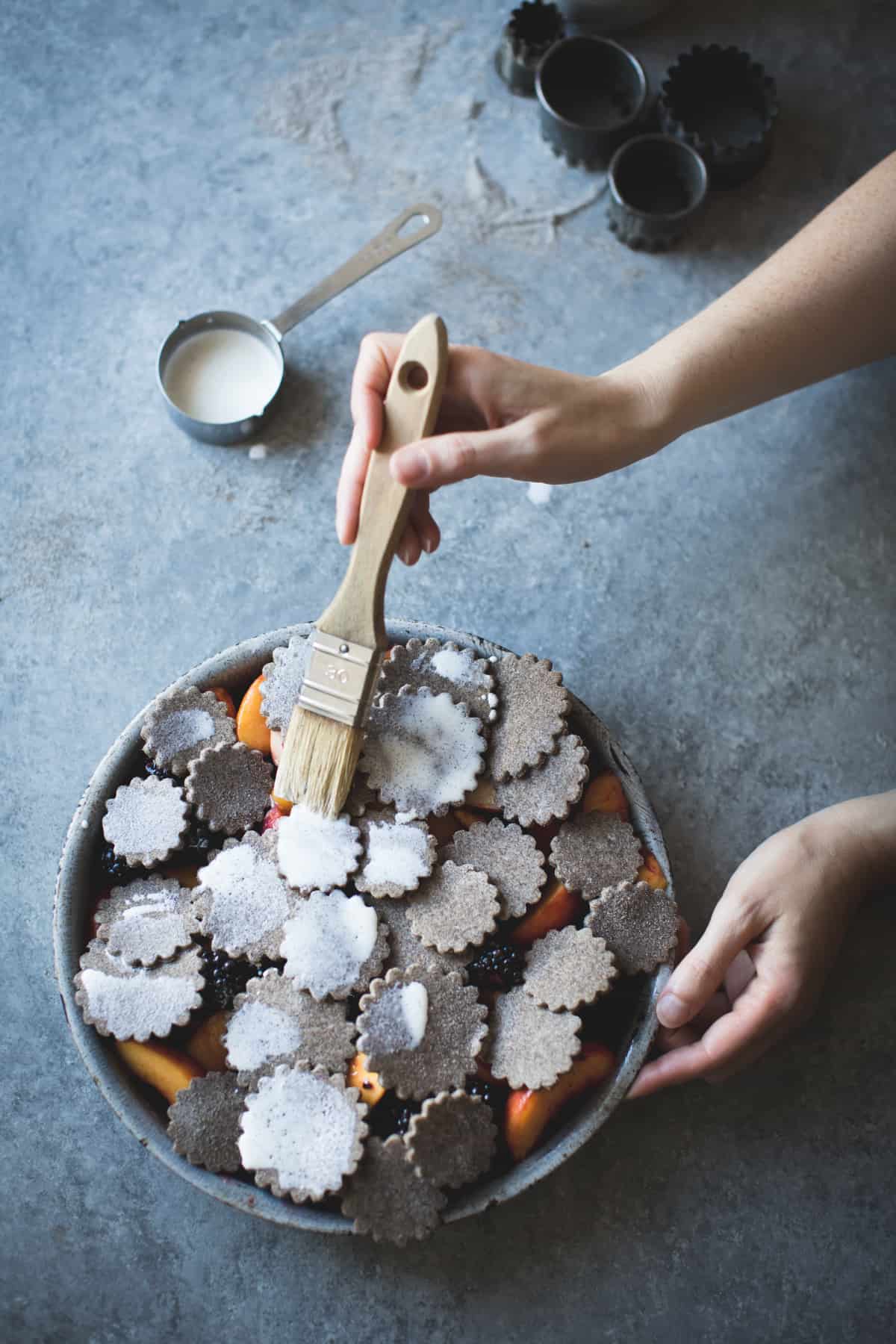 I had a bit of buckwheat pie dough left over from a fun, book-related project that Sarah and I will be revealing in the coming weeks, so I paired it with the sweet peaches and blackberries that are currently in season for an impromptu dessert. 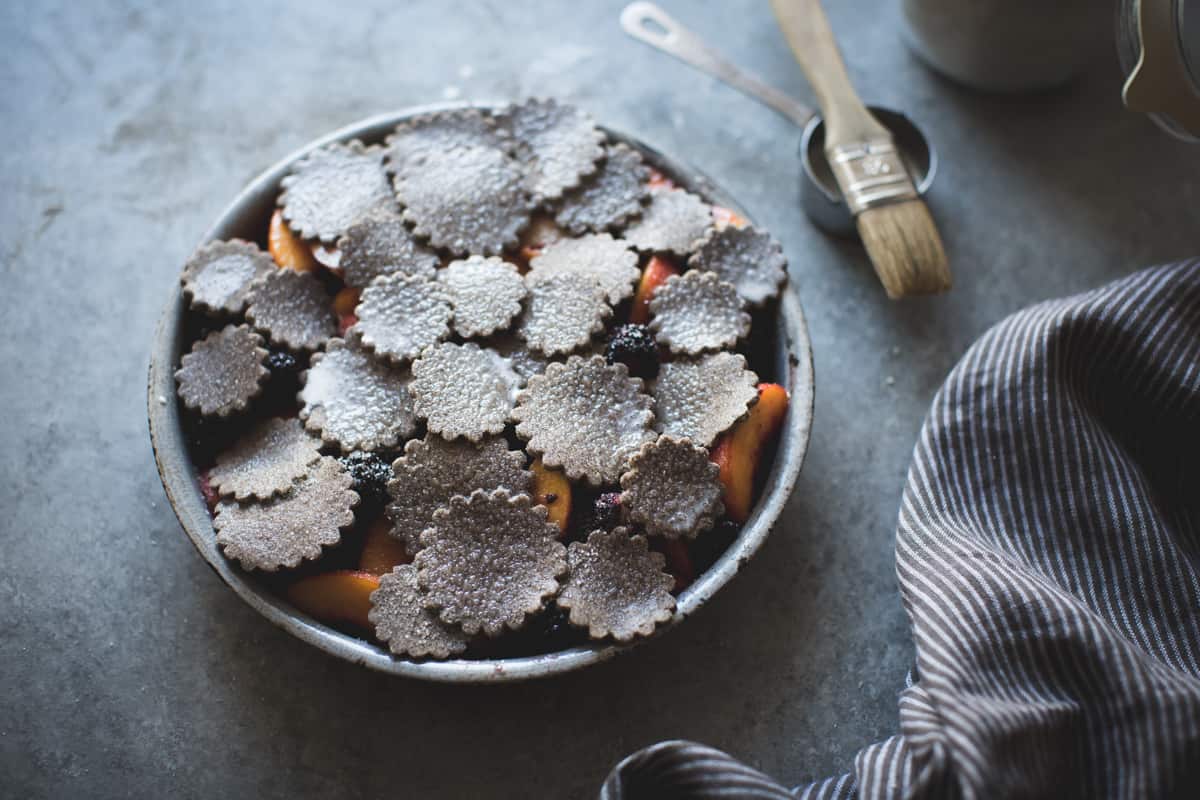 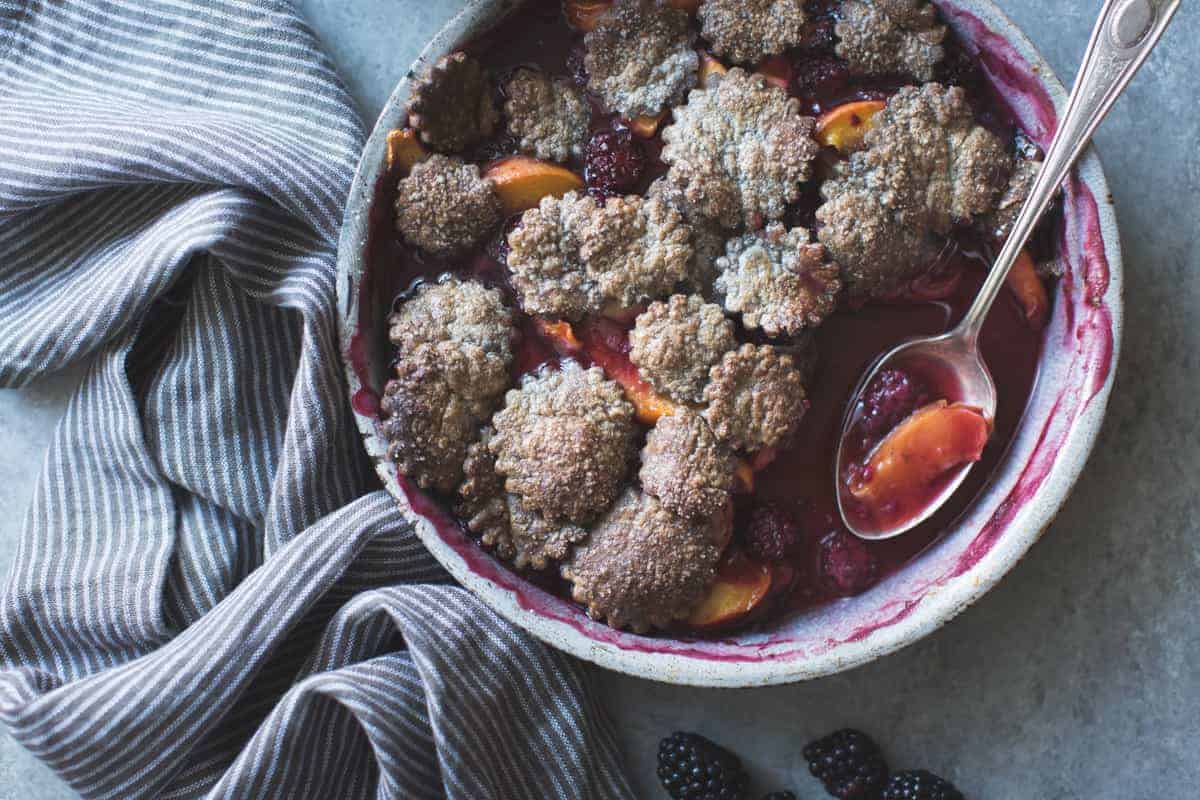 In a buckwheat frenzy, I also toasted some buckwheat groats and added them to my standard vanilla ice cream base from the book. Buckwheat has a toasty flavor with hints of hazelnuts and cinnamon in a base that smacks of chocolate, coffee, and earth. It adds a nutty nuance to ice cream that complements the pandowdy just so, playing up the buckwheat notes in the crust. But I eat it straight from the container, too, enjoying the unusual taste of toasted buckwheat conveyed in a cool custard. 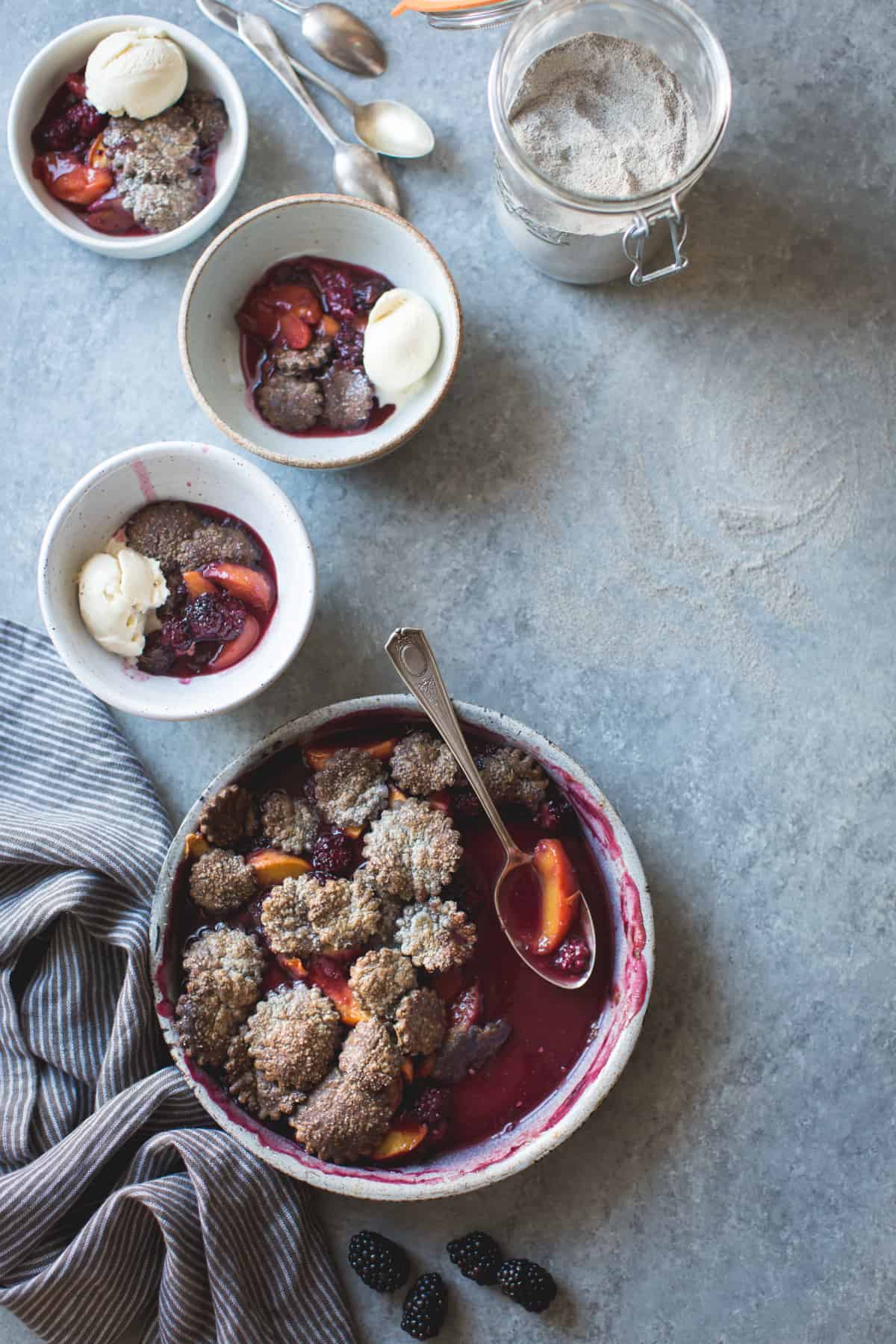 I can't wait to share all of Alternative Baker with you next month! But for now, I hope this satisfies the alternative baker in all of you dear readers. 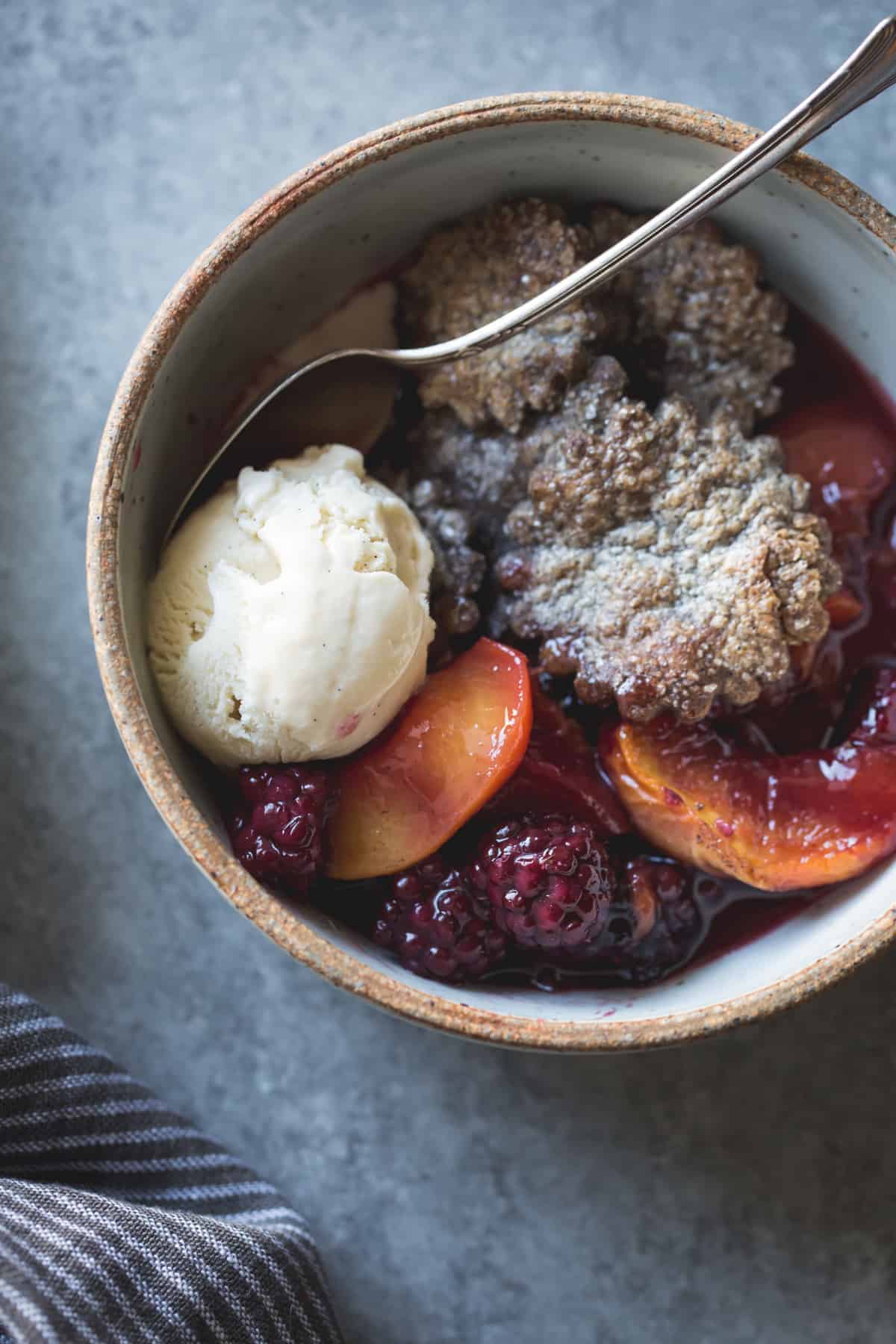 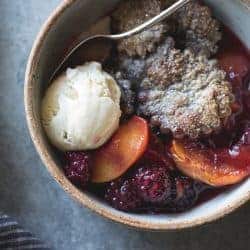 Print Recipe Pin Recipe
Pandowdies are versatile, so feel free to trade the peaches and blackberries for nectarines and blueberries, or whatever you have in season.
Alanna Taylor-Tobin
Prep Time: 30 minutes
Cook Time: 50 minutes
Total: 1 hour 20 minutes
Servings: 6 servings 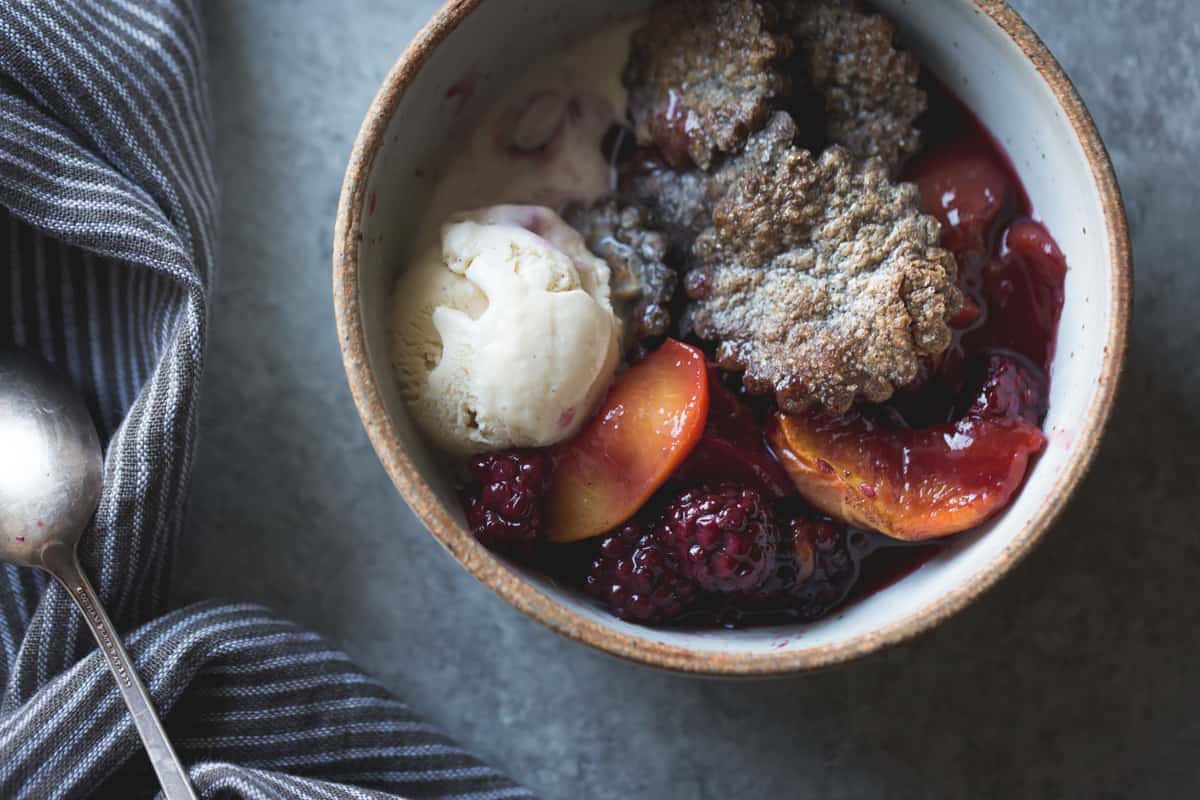