My mom likes to say, 'You're entitled to your own opinion, even if it's wrong.' As a psychologist specializing in subjectivity, she should know.

But it seems there is an area in which only one opinion counts, and that is the hotly debated issue of cakey vs. fudgy brownies.

Or is it REALLY hotly debated???

Nearly every brownie recipe header I've read begins with something akin to, 'Some people like their brownies cakey, but we prefer them rich and fudgy, so here's a recipe for you superior bakers who are smart enough to know better.'

Are there really people out there who like cakey brownies, or is this just an ego-stroking myth perpetuated by the fudgy brownie lobby to make us feel banded together against some common, imaginary foe? Isn't the whole point of brownies that they are rich, dense, chocolaty and gooey? Wouldn't you just make a chocolate cake if you wanted something 'cakey?'

When I was a kid and would make brownies from the box, I would always choose the 'fudgy' option over 'cakey,' which entailed adding an extra egg, and I remain true to my fudgy preference today. (Though of course I wouldn't admit otherwise lest you think me hopelessly uncool.)

But along comes Alice Medrich with this 'New Bittersweet Brownie' recipe to shake everything up. These brownies aren't exactly fudgy, though they do satisfy the über-chocolate craving that often plagues fudgy brownie-lovers. But they aren't cakey, either. Nor are they 'chewy,' the newest category of brownie to emerge on the scene. Their texture most closely resembles a fluffy-dense flourless chocolate cake, but not the gag-me-rich, truffle-ganache sort; the type that has some air whipped into it so that it comes out delicate and manageable. Alice Medrich describes them as being 'mousse-like', and they do have a delicate, airy-ness to them, but 'moussey brownies' don't sound particularly appealing. 'Whipped brownies?' 'Really friggin' awesomely delicious brownies?' I'm at a loss.

Perhaps they just need to be in a class by themselves.

Categories and pigeon-holing aside, let's talk about why these brownies are so awesome:

I think Ms. Medrich says it best: 'On a plate, with a fork and a dollop of cream, these are definitely dessert.'

So, if you give these brownies a go, and have an idea of what to call them, please let me know. Just be sure not to over-bake them, as this can lead to 'accidentally cakey brownies.'

And nobody likes those. 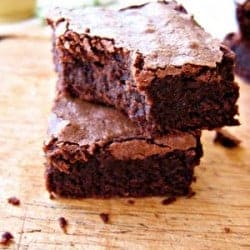 Print Recipe Pin Recipe
Fudgy without being dense, loaded with chocolate, not too sweet, and with a shiny, crackly top. These are my favorite gluten-free brownies ever!
Alanna Taylor-Tobin
Prep Time: 15 minutes
Cook Time: 30 minutes
Total: 45 minutes
Servings: 16 brownies

Adapted from Chewy, Gooey, Crispy, Crunchy Cookies, by Alice Medrich. *If you are extremely sensitive to gluten, omit the whiskey or use a certified gluten-free version such as Queen Jennie. Or use brandy or dark / spiced rum instead. You can also use espresso instead, or just leave it out altogether.  *This recipe works well with many different types of GF flour including teff flour, chestnut flour, or a good GF all-purpose flour blend. Best to substitute by weight if possible. If gluten is a non-issue for you, feel free to substitute 1/3 cup + 1 tablespoon all-purpose flour for the rice flour. The trick to getting the crusty top on the brownies is having the melted butter and chocolate quite warm when you add it to the egg mixture (but not scorching hot). As these brownies are mainly chocolate, use a high quality baking chocolate that you like the taste of. Scharffenberger, Guittard and Valrhona are all excellent brands. Note that if you bake these brownies in a glass pan, the baking time will be longer as glass conducts heat more slowly than metal.  Nutritional values are based on one of sixteen brownies.