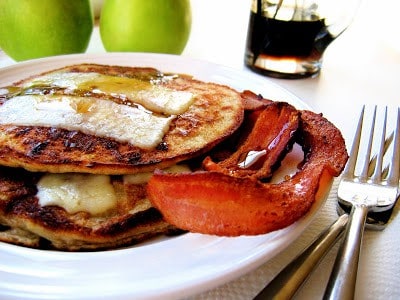 A vegan's worst nightmare, and not diet food by any stretch of the imagination, you would be hard pressed to find a better cure for a hangover than these deliciously satisfying cakes, other than a bit of the old 'hair of the dog.' I made this discovery the first time I made the original recipe, from Deborah Madison's Local Flavors, on New Year's Day of this year. But this makes a satisfying breakfast even when your liver is not chastising you for the uncouth way you treated it the night before.
In my un-ending quest to find more ways of using up sourdough starter, I adapted this recipe yesterday morning, subbing starter for the flour and buttermilk originally called for. I've never been a huge bacon fan (I like the smell of it better than the taste) but I sampled my first bacon ice cream a couple weeks ago and it brought on the bacon lust of which so many have already fallen victim. I purchased some cured, applewood smoked Niman Ranch bacon to use for a future post (spoiler alert: butternut squash mac and cheese with sage, collard greens and the 'b' word), and was anxious to test it out. I couldn't think of a better accompaniment to these cakes. The cured bacon crisped up beautifully in a hot skillet in just a few minutes. I toyed with putting the bacon IN the pancakes, but had mercy on Jay, a 'vegetarian' (or 'environmentally responsible eater,' he just corrected indignantly, reading over my shoulder), but you sure could. I did, however, cook the cakes in the rendered bacon fat, which may make you feel obese just reading about it but, really, it's pretty much the same as using butter. And it would be a shame to let those flavorful oils go to waste. (If you want to go the veg route, you won't be any worse off using butter to fry the cakes. You might try using a smoked cheddar on top, such as Meyenburg's smoked goat cheddar.) 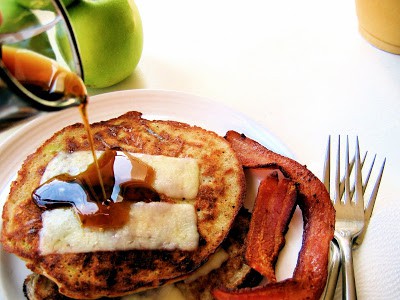 A couple things make this recipe unique. First, the eggs get separated, the yolks whisked into the batter and the whites whipped to soft peaks and folded in. Secondly, the acidity in the starter reacts with the baking soda, causing the batter to foam up, as per usual in sourdough cakes. Last but not least, slices of extra sharp cheddar are laid over the cooked side of one cake, melting and giving the cakes a deliciously unexpected bite. Oats and grated apples give the cakes texture and earthy, tart flavor; a drizzle of maple syrup brings it all together, and the side of smokey, crisp bacon- well, it just makes everything that much better.
Don't just save this for hungover mornings-after; these tasty cakes are the perfect way to start any crisp, fall, bojon day. If you are nursing a hangover, try sipping a bit of Calvados along side.
You're welcome. 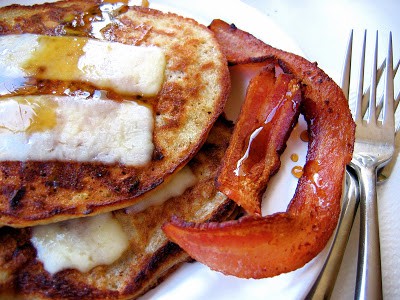 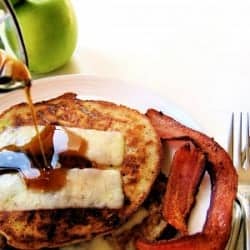 Nutritional values are based on one of eight pancakes with toppings. 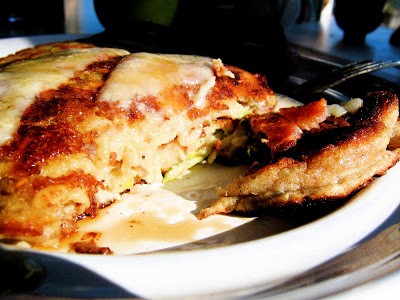