Your ticket to an easy, impressive brunch. Also called an oven pancake or German pancake, this gluten-free Dutch baby gets a dose of tangy richness from buttermilk and tender texture from sweet rice and sorghum flours all topped with thick yogurt and crimson maple cranberry compote. 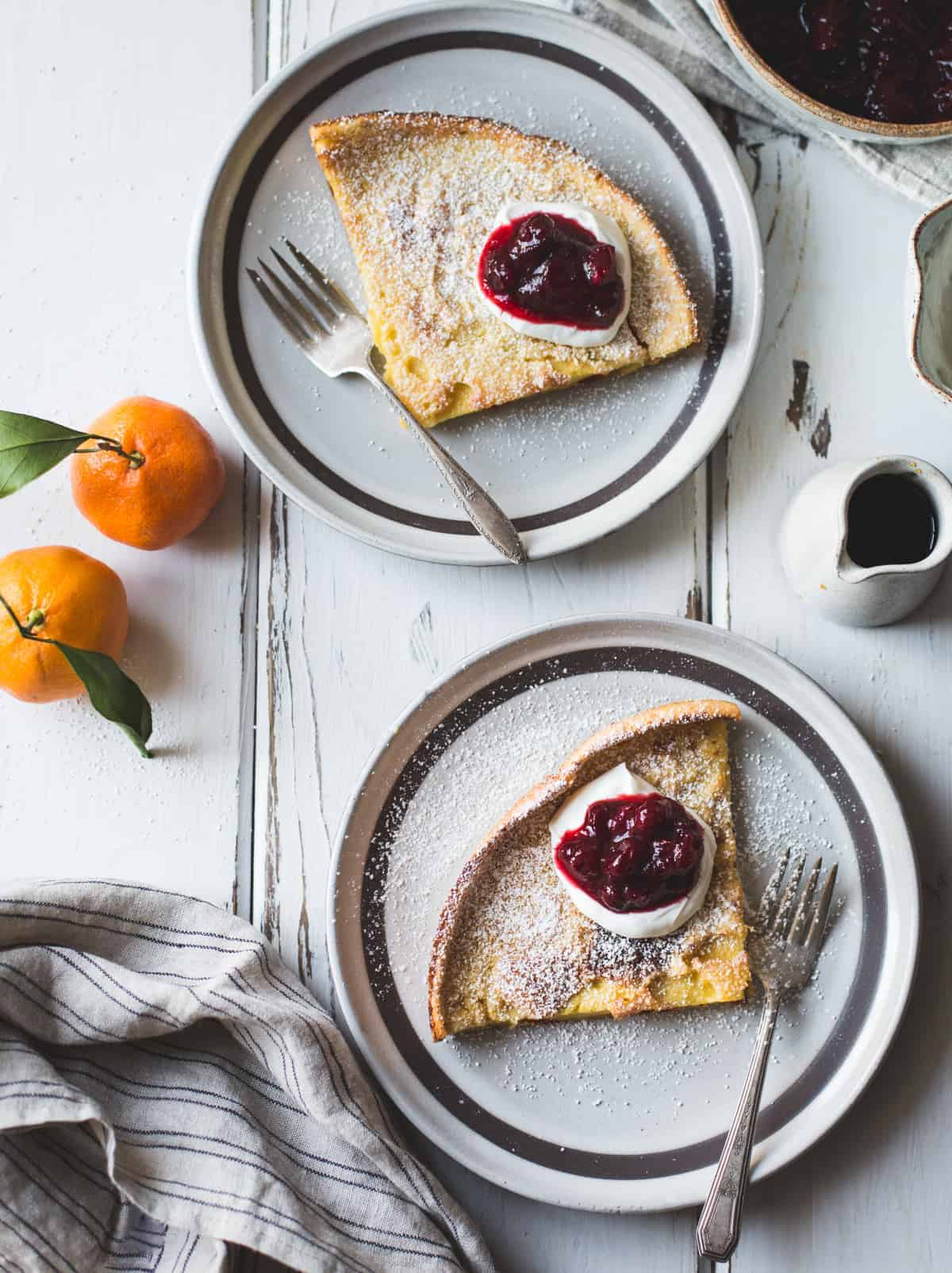 Did you all have a good holiday? Mine was pretty sweet. It started out with the best present I could ever get – a printed out copy of my cookbook manuscript, which arrived on the afternoon of Christmas Eve. I resisted the urge to rip it open in front of the UPS guy and scream, “I WROTE THIS!!!” I can’t stop gazing at it with love and a bit of fear. I have the next week to give it a thorough proofread before it goes to print (!!!) in January. 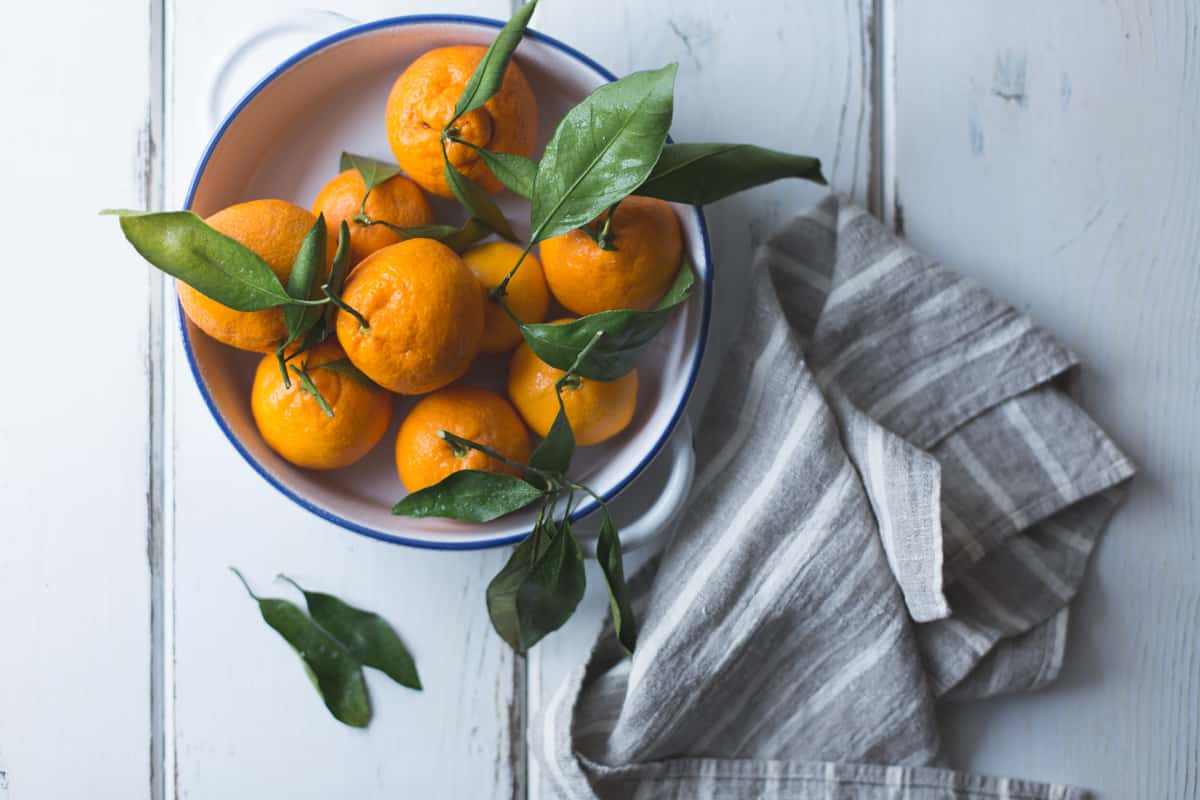 I made a quadruple batch of chocolate peppermint bark (which I may or may not be eating for breakfast at the moment). We reluctantly left both Catamus and the manuscript at home and headed to Berkeley to drink prosecco and eat gumbo and banana butterscotch pudding (a recipe from the aforementioned book) on Christmas eve with my family. 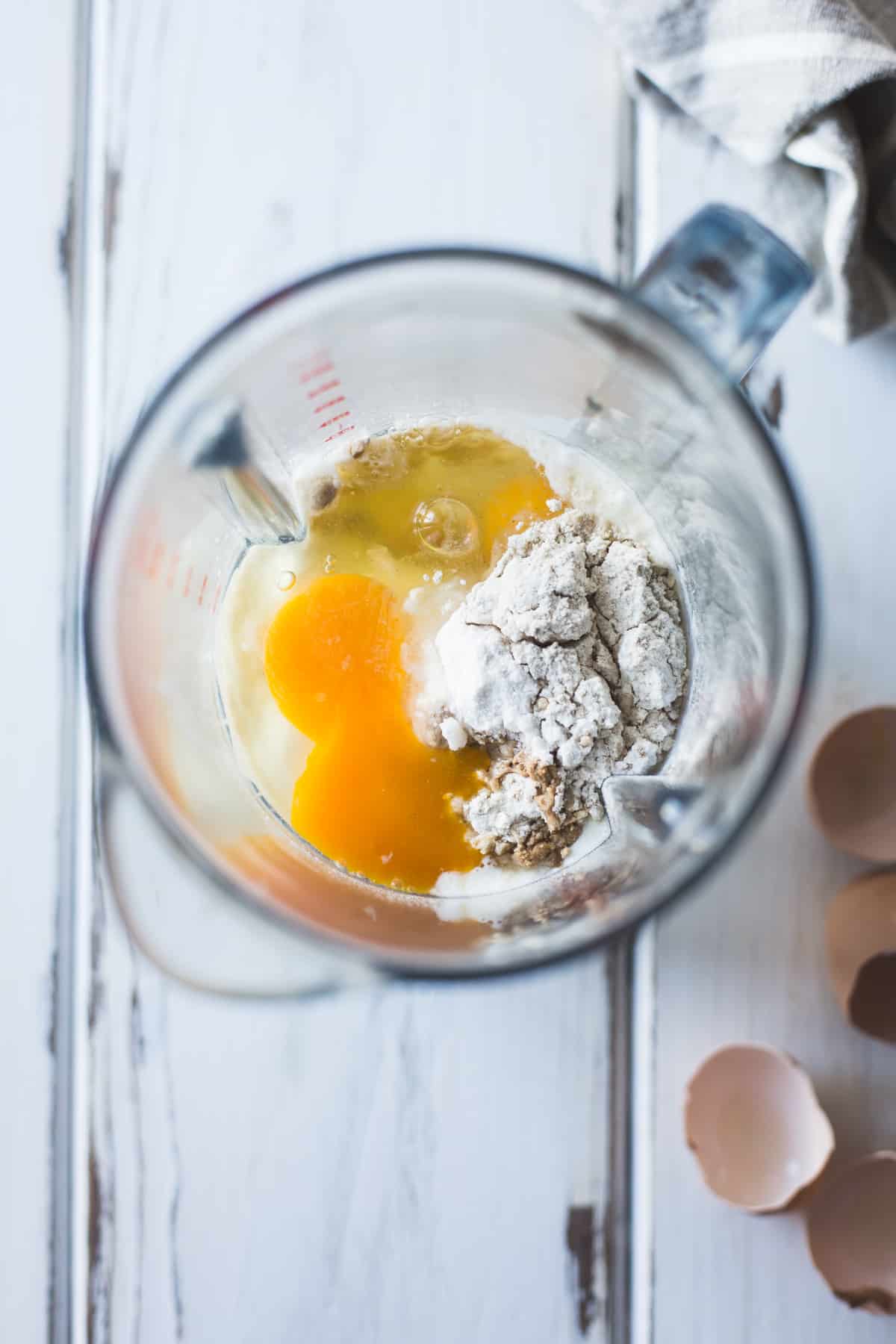 Christmas day was spent basking in sunny Santa Cruz with Jay’s folks and gorging on Mary’s epic snowball cookies (which I’ve duly adapted and raved about here and here) and persimmon pudding (which I’ve posted a different although still delicious version of here). There was oodles of cheese, two kinds of potatoes, salad, brussels sprouts, a cat and dog tolerating each other by the fire, a walk in the hills and a gorgeous sunset. 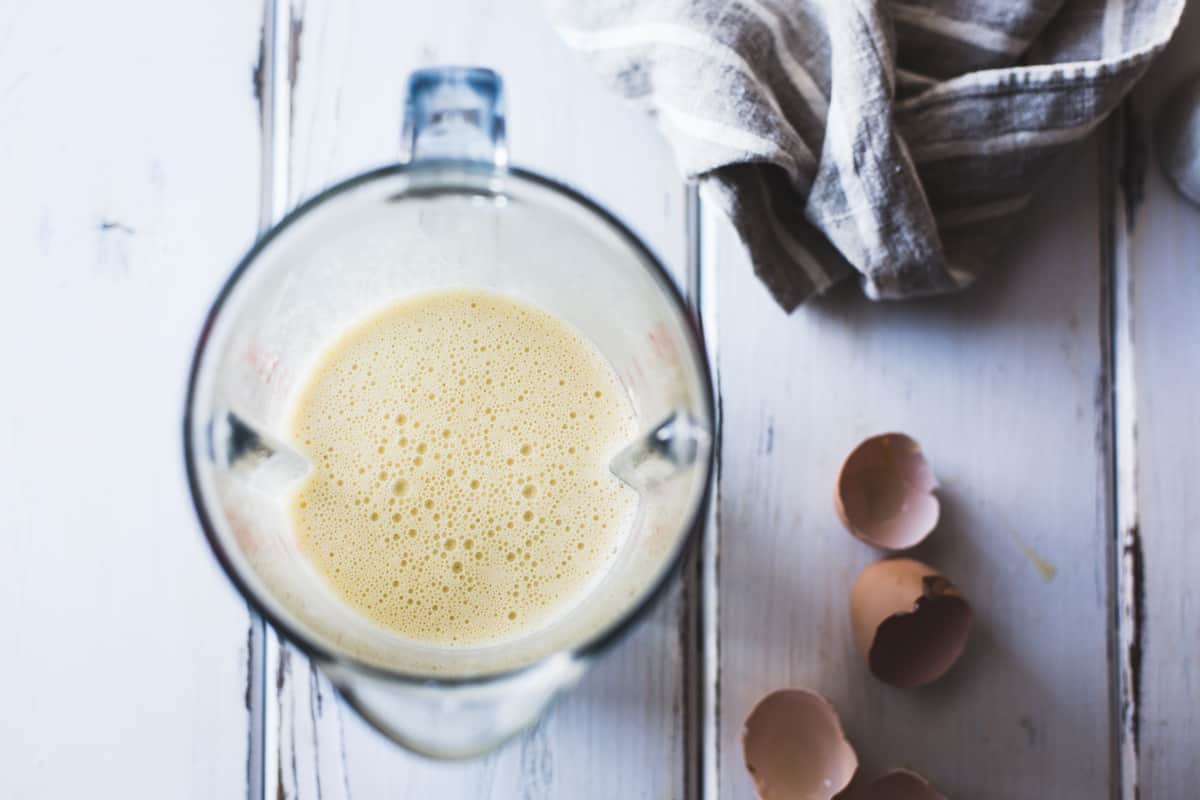 Throughout these festivities, I’ve been doing a bit of an experiment. I went to a yoga retreat a couple of weeks ago, an early birthday present to myself, and the days started with a class at 7 am. If left to my own devices, I tend toward night owl-dom, relishing the late hours for focusing on work. But in the morning, I would sleep in later and later, regretting losing those precious hours of winter daylight. What to do? 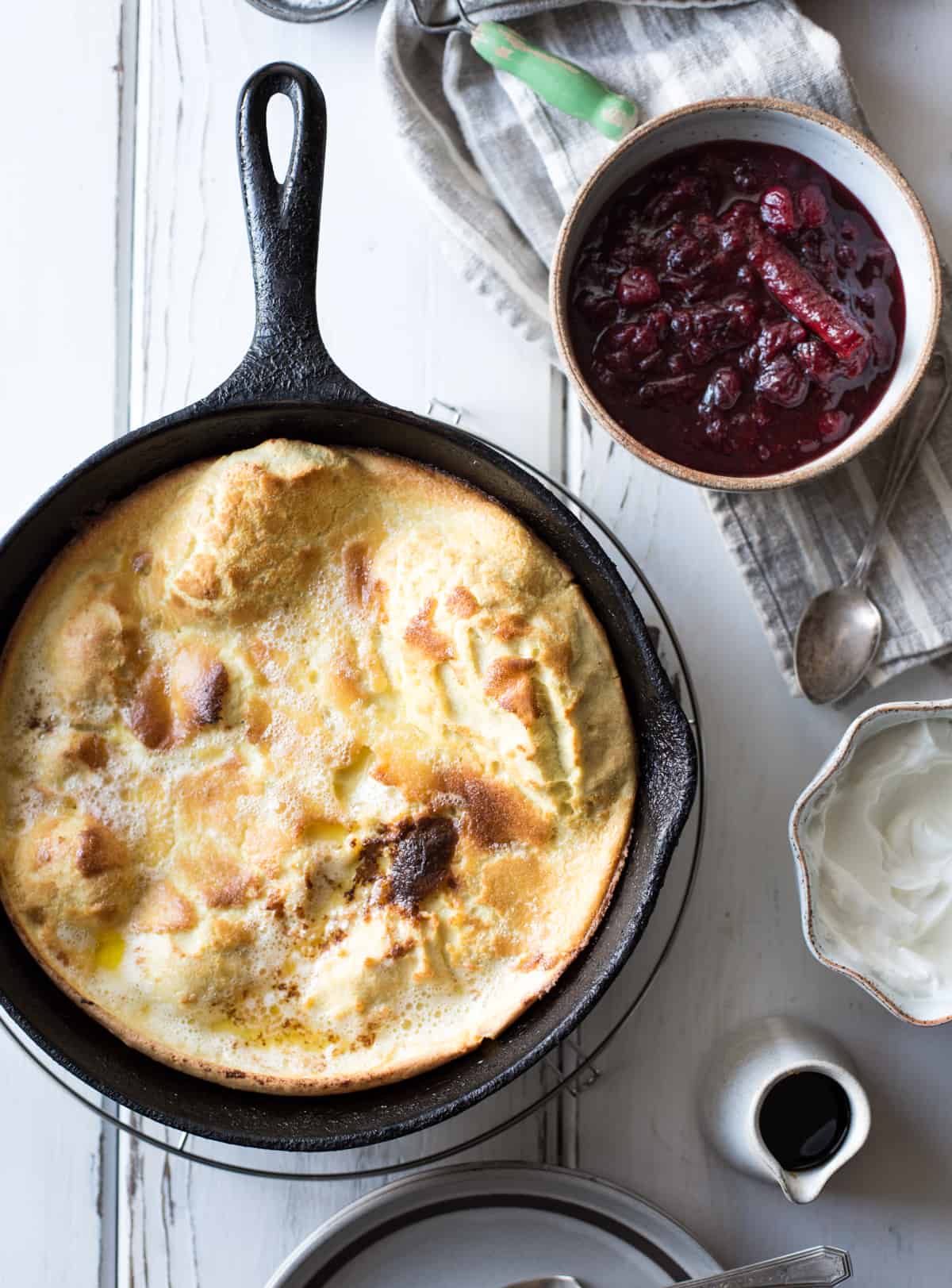 During the workshop, it dawned on me (no pun intended) that I could harness the same sort of calm in the early morning, getting up with the sun and being productive from the get-go. The first two mornings of the retreat were painful, but on the third morning, I woke up on my own before 7 and felt ready to start the day. 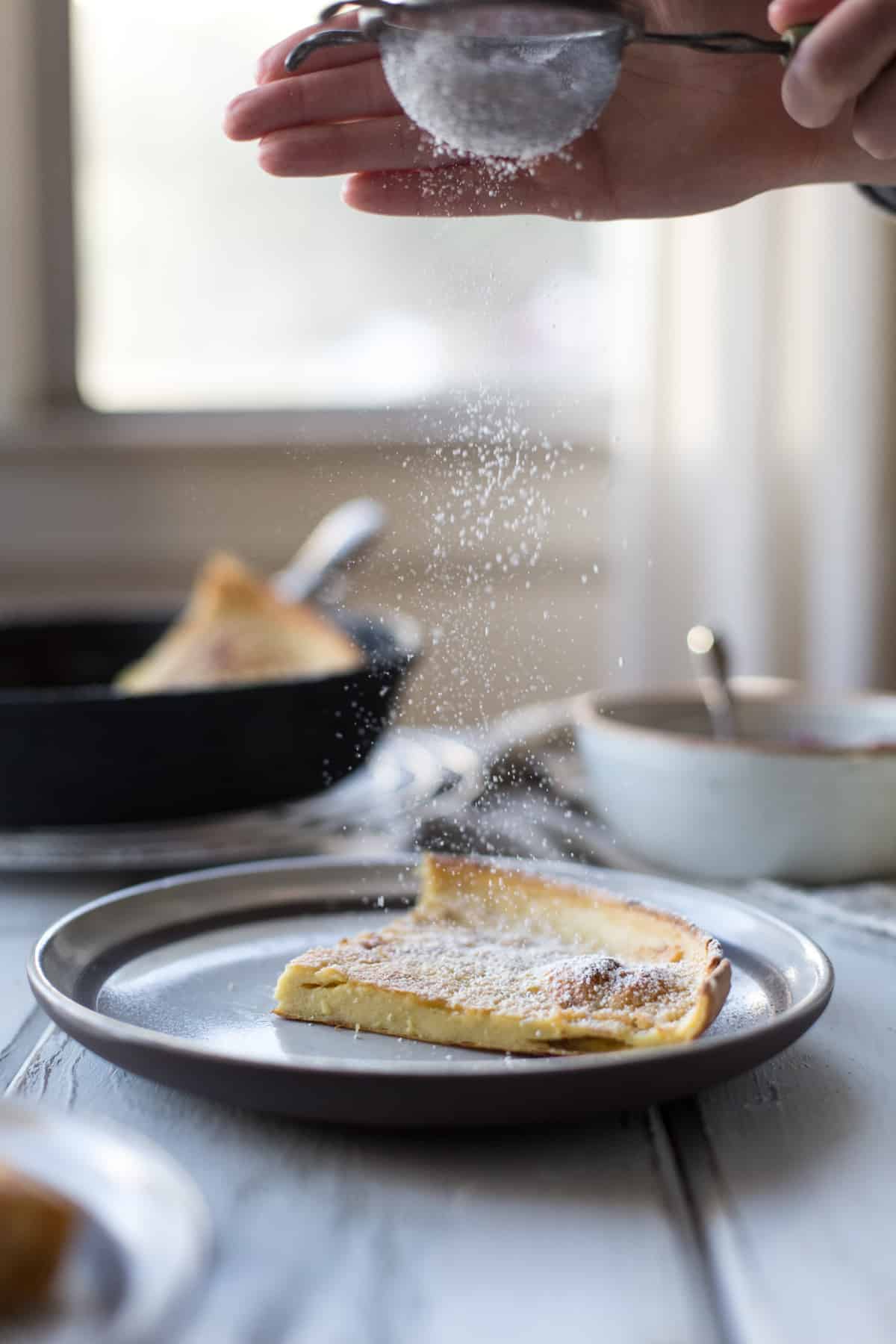 I’m trying to make this habit last, and I’m 2 weeks in and going strong (though I’m meeting a friend for a late and probably boozy dinner tonight, so we’ll see what happens!). For now, I’ve been grateful for a reason to crank up the oven first thing. It’s been COLD here in SF, especially in the mornings, so the 450-degree oven needed for dutch babies gives me even more incentive to bake one up. Another incentive is to make use of the fresh cranberries that are still about, and yet another is that the batter comes together in an instant in the blender, with little clean-up. 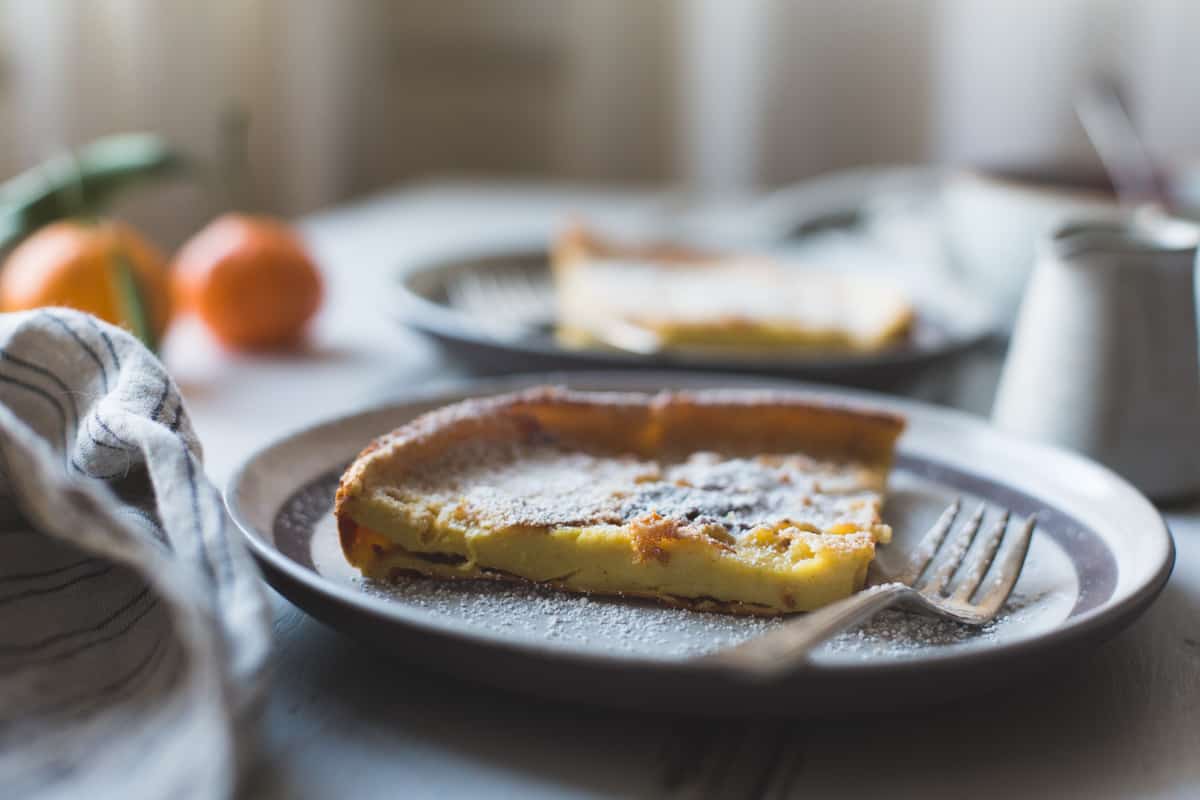 Dutch baby batter is similar to popovers – a thin affair of eggs, milk and flour – and magic happens when the batter hits a hot, buttery skillet, creeping up the sides and rumpling in the middle. The top and edges crisp and brown, while the fallen pancake stays moist and custardy in the middle. I’ve been making this version with buttermilk, which adds extra body and richness without extra calories, and sorghum flour, which adds a bit of nutty flavor. 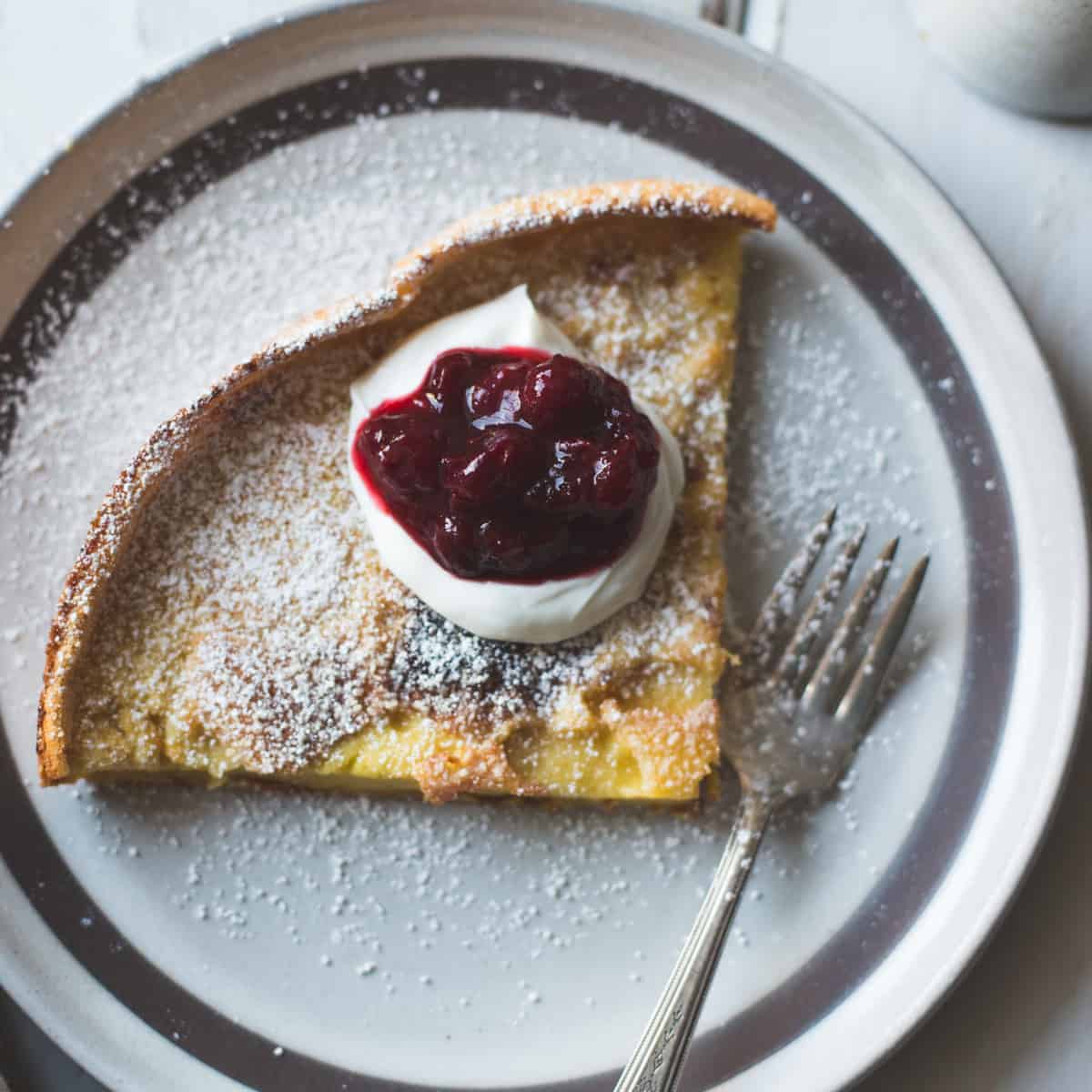 I’ve been pairing it with this easy cranberry compote, flavored with tangerine and cinnamon and sweetened with maple syrup, and a big dollop of Greek yogurt or skyr. 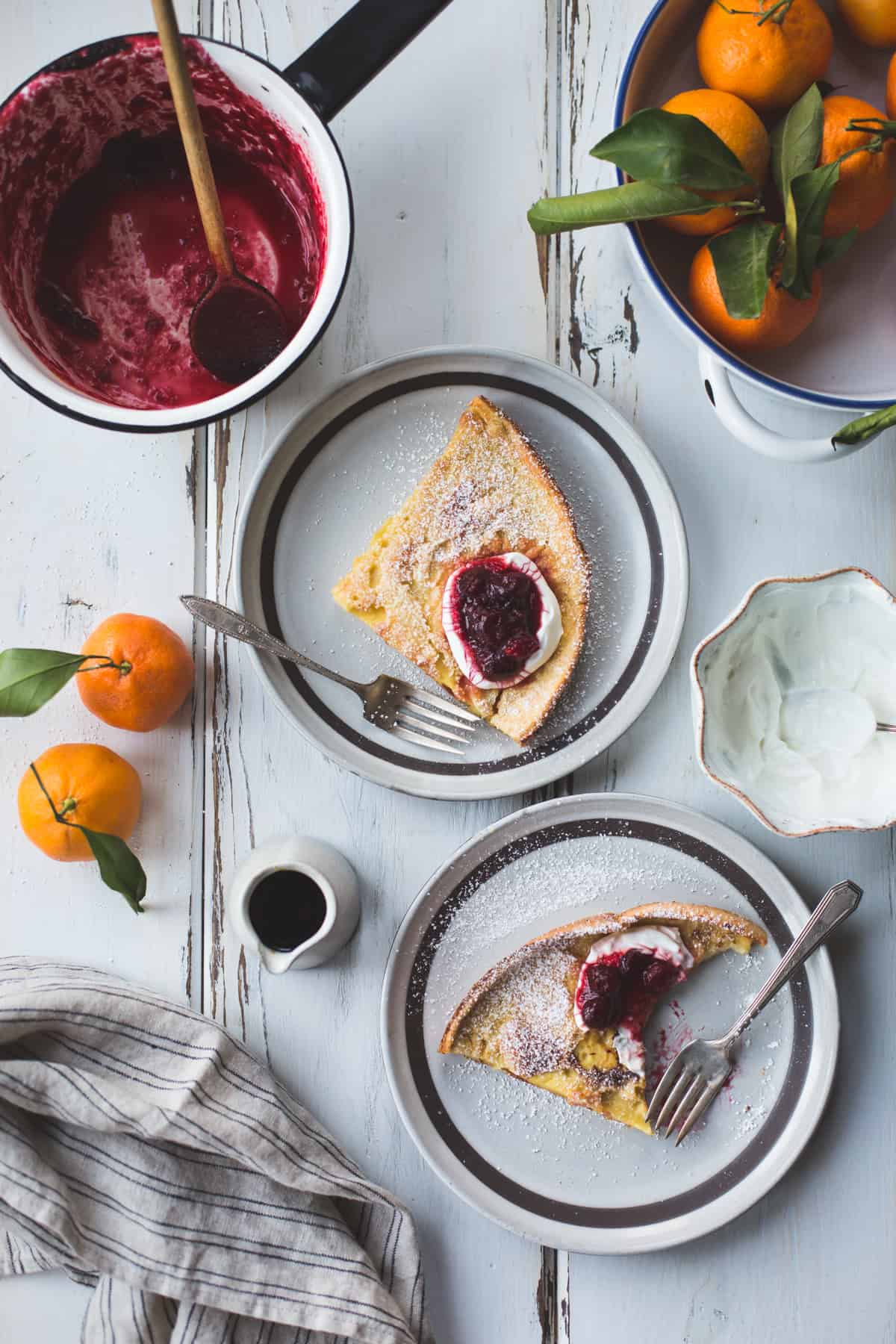 Safe to say, I’ve got a bit of a dutch baby obsession going on now. But hey, if getting up early = Dutch babies for breakfast, count me in. 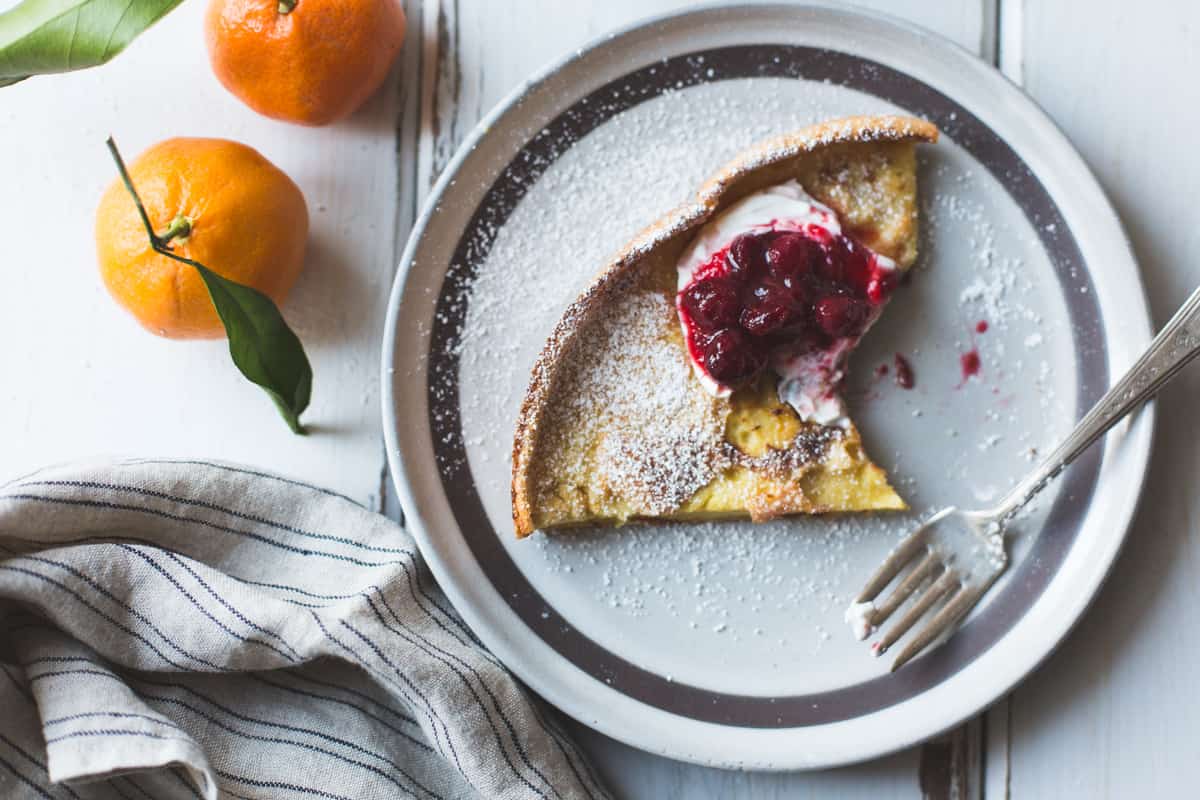 Some other handsome babies I’ve got my eye on are: 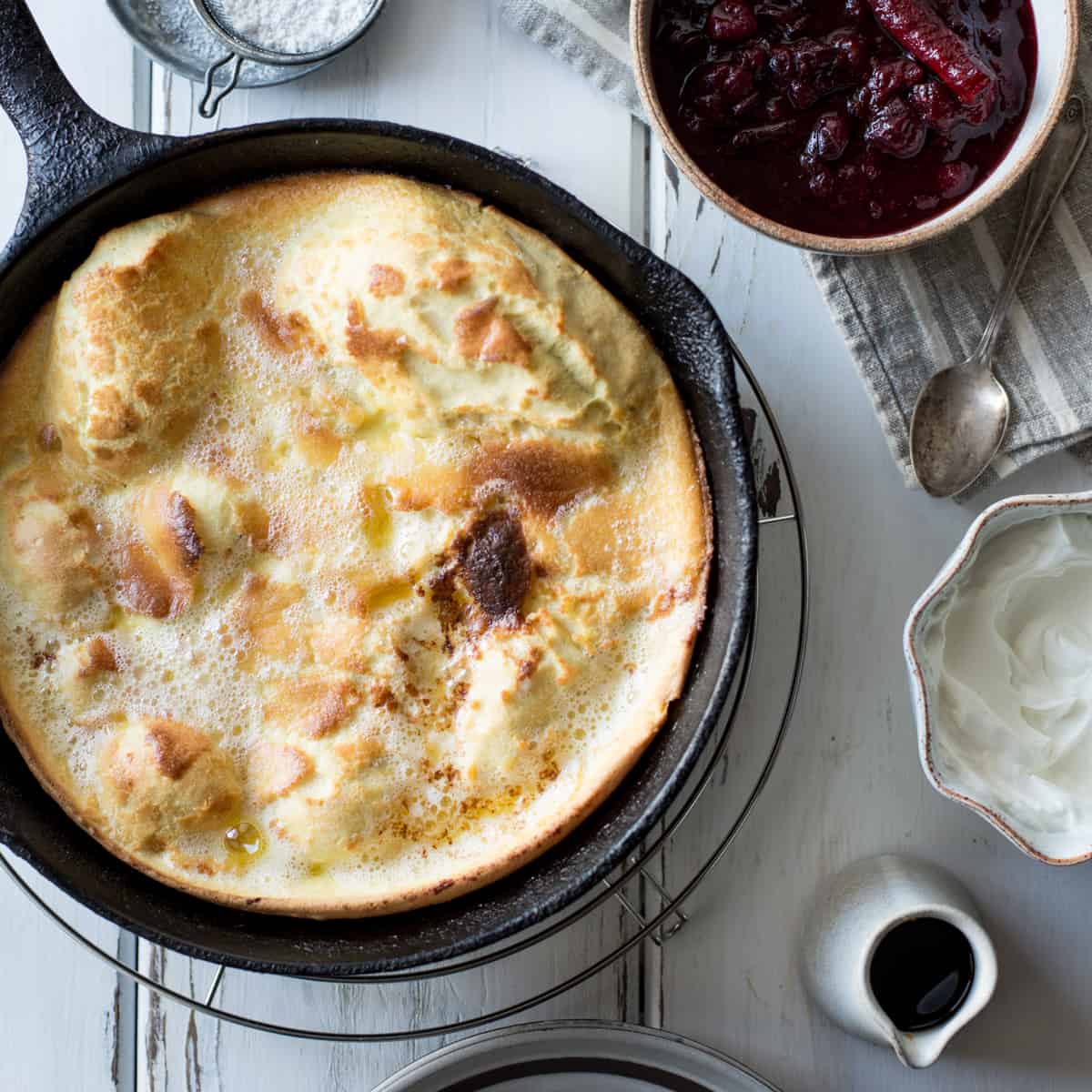 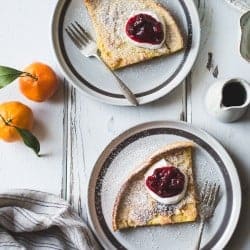 Nutritional values are based on two servings.