Maple sugar makes this creamy, dreamy ice cream taste like the most intense maple you've ever had. Thanks to Coombs Family Farms for sponsoring this post! 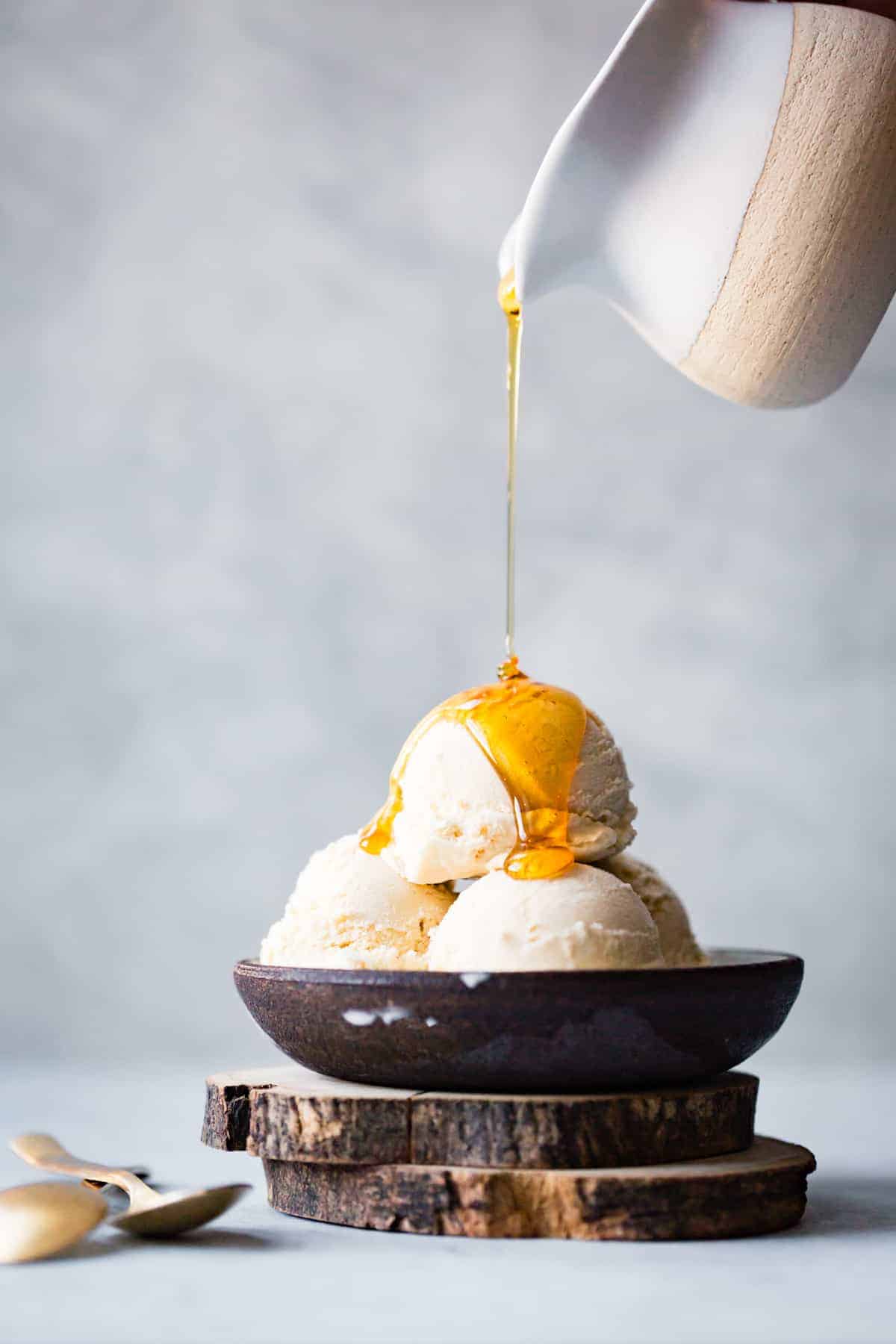 Maple has been my favorite sweetener for years, and now that I've seen how it's made, I love it even more. Last month, the folks at Coombs Family Farms invited me and Jay to New England to see their sugaring process firsthand. As born and raised Californians, a trip to New England in the dead of winter made us nervous. "What if I die?!" I asked my Massachusetts friend Janet the week before the trip. Perplexed she asked, "You mean...of snow?" 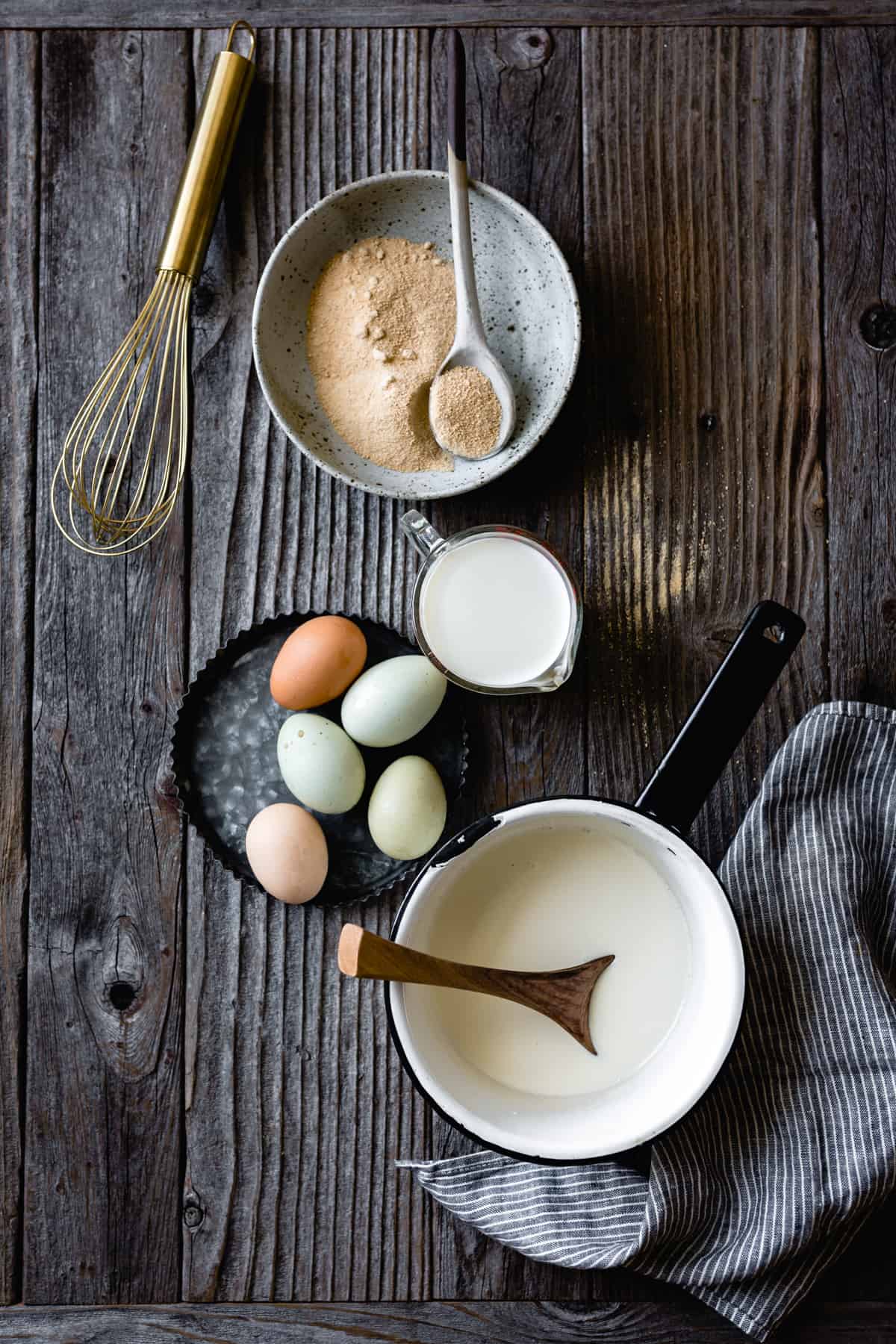 Spoiler: We did not die of snow. The powdery white stuff covering the ground made the world seem quiet, peaceful, and magical. We didn't mind tromping through it to the sugarhouse since warm, freshly boiled maple syrup was waiting at the other end of a grove of maple trees. 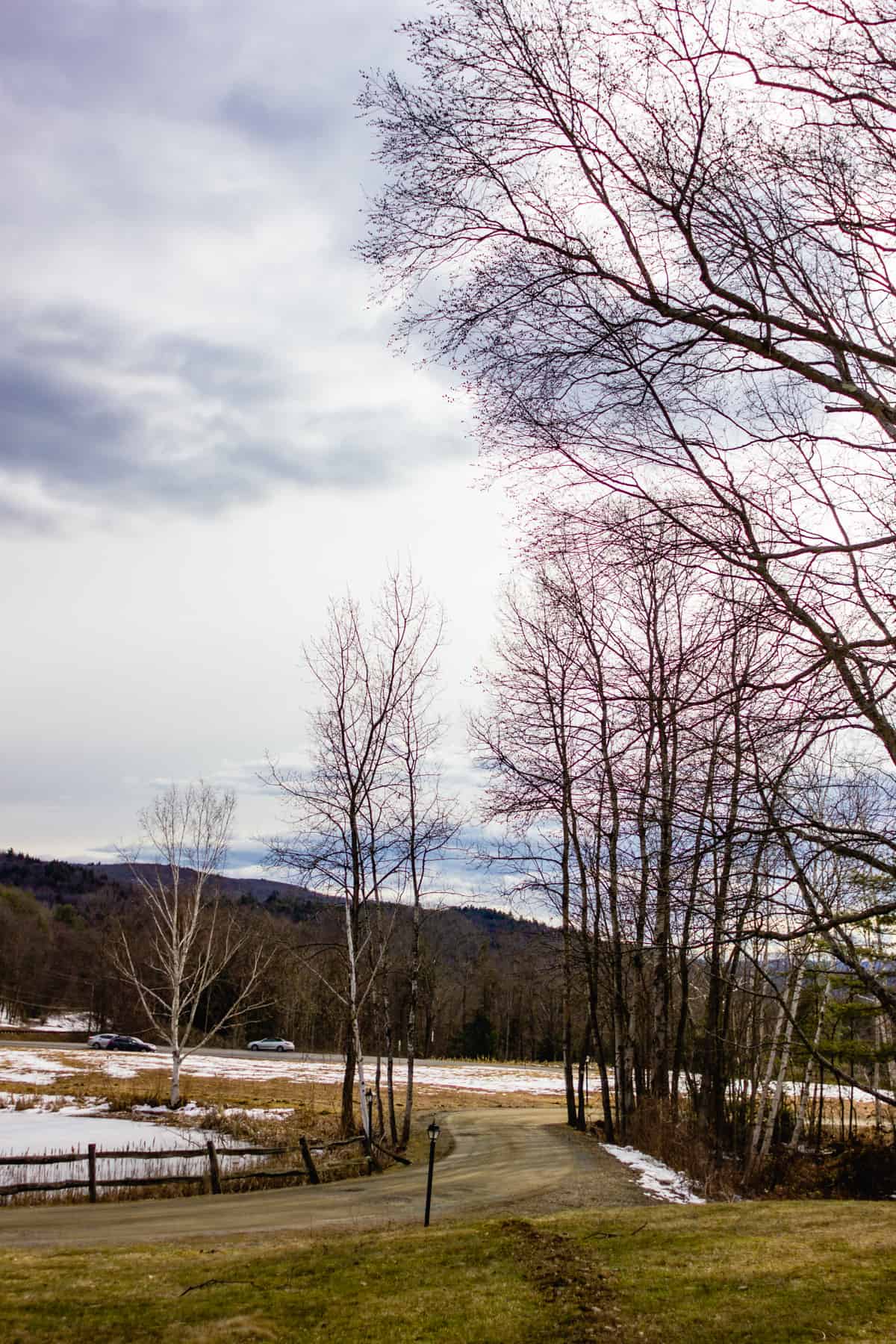 We stayed at the picturesque Chesterfield Inn just over the Vermont border in New Hampshire, and found our room stocked with a massive sap bucket filled to the brim with maple goodness. 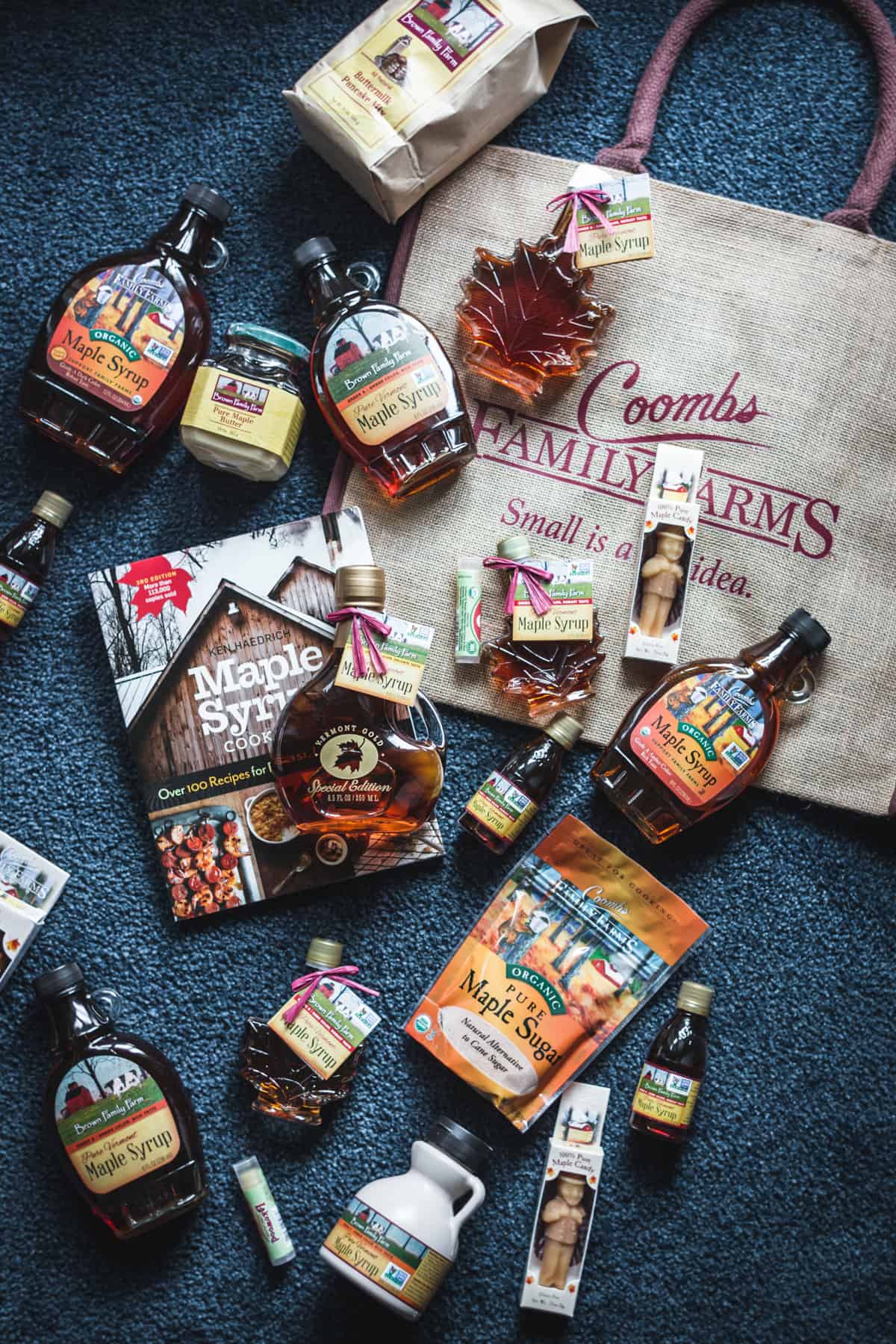 An epic maple meal at the inn's restaurant started out with our choice of six (6!) maple infused cocktails, my favorite of which was the No'Easter – a New England version of a Dark n' Stormy made with maple and whiskey. There was a green salad with maple balsamic vinaigrette, roasted salmon with maple butter, maple quinoa-stuffed acorn squash, and the grand finale: a dessert buffet with no less than 10 different maple-sweetened treats made by baking extraordinaire Cindy (aka Queen of Maple). 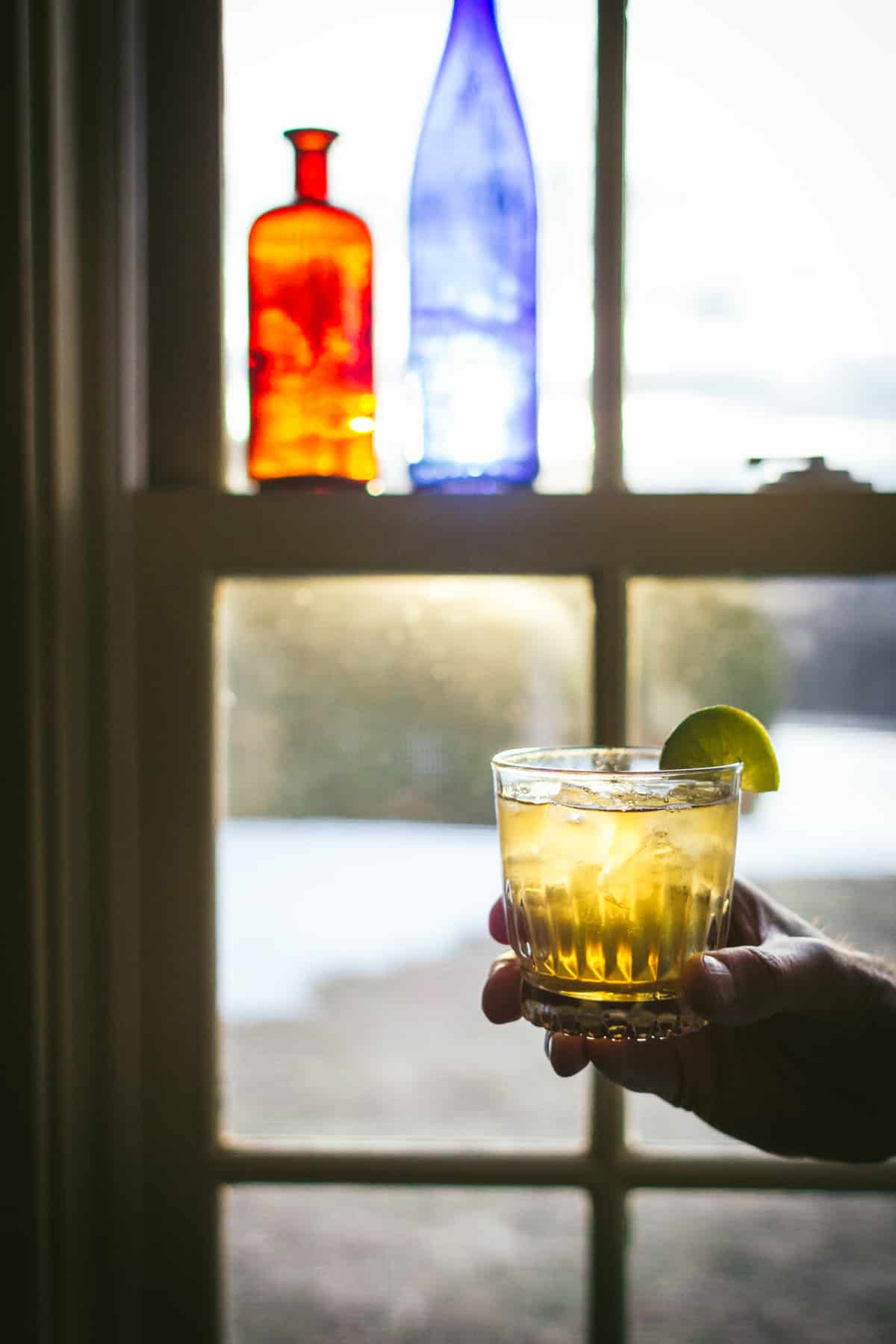 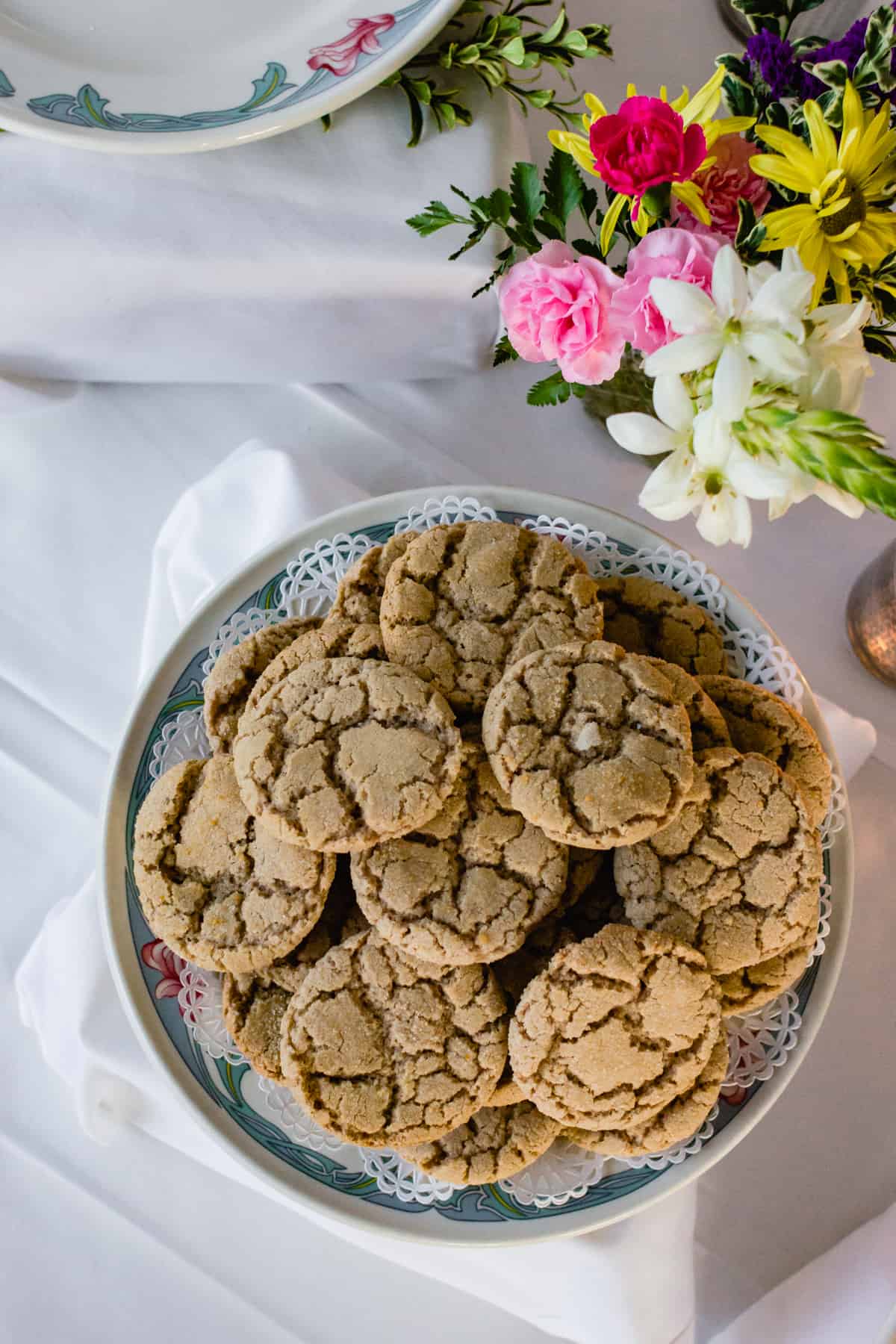 The next day we pried ourselves away from Chesterfield fixture Yoda aka Best Cat Ever, and drove through majestic southern Vermont to learn all about the sugaring process. 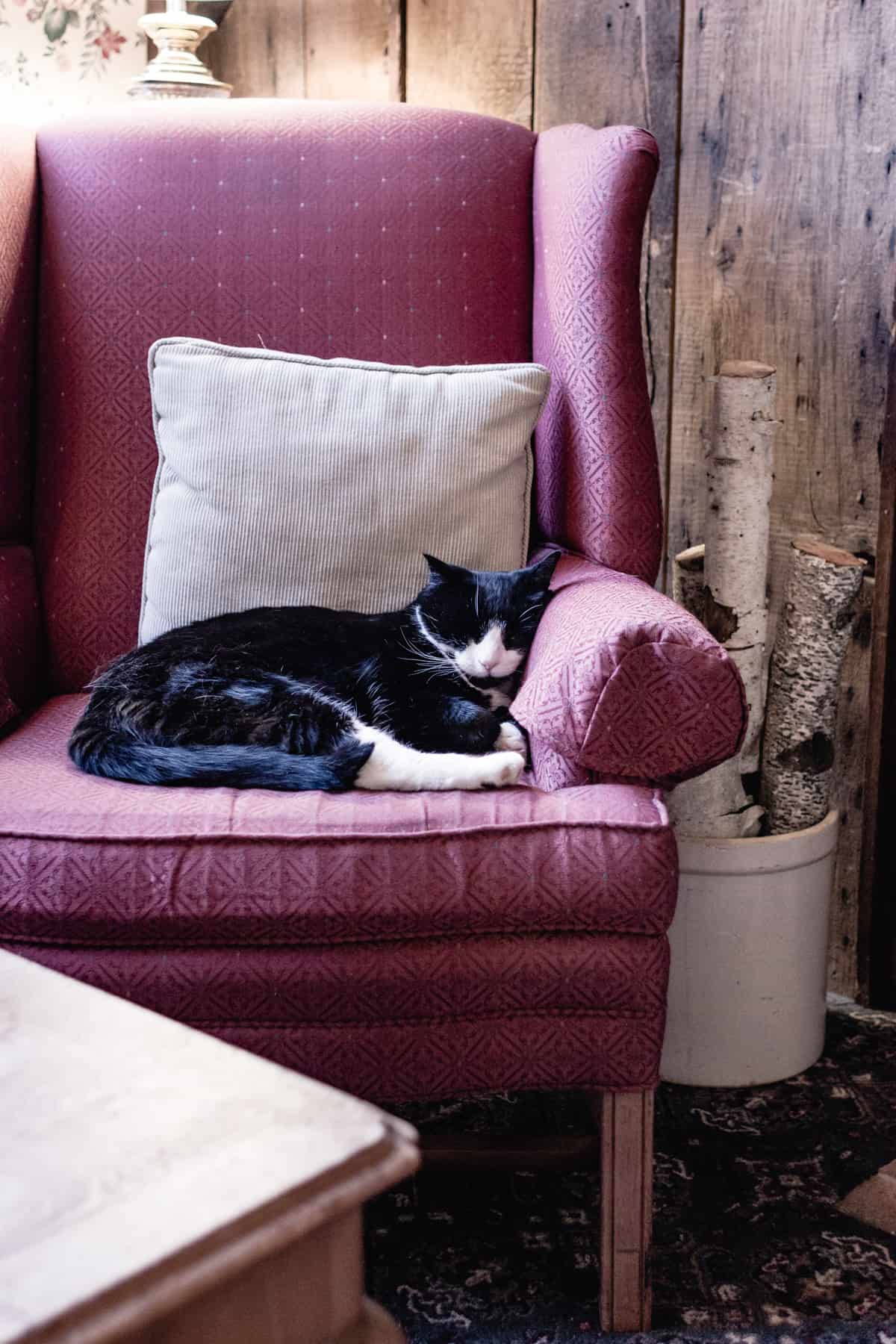 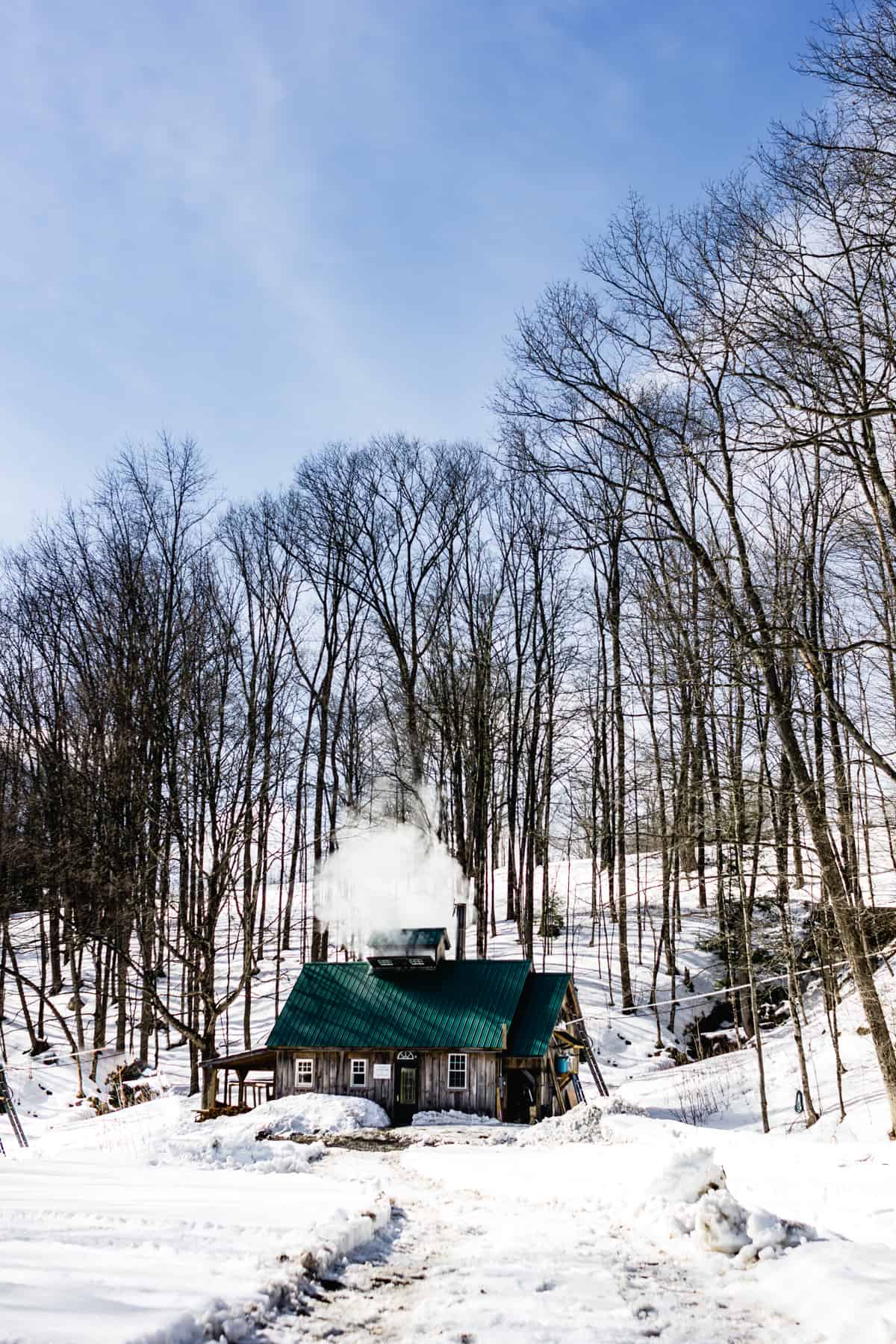 It takes 40 or 50 gallons of maple sap to make 1 gallon of maple syrup. The sap is completely liquid and crystal clear, and it tastes like a glass of water sweetened with the tiniest drop of maple syrup. The sap needs certain weather conditions to flow – freezing nights and sunny days to help the sap flow upwards from the roots of the trees. To collect the sap, a tiny hole is drilled into the tree (don't worry – these don't hurt the trees at all). 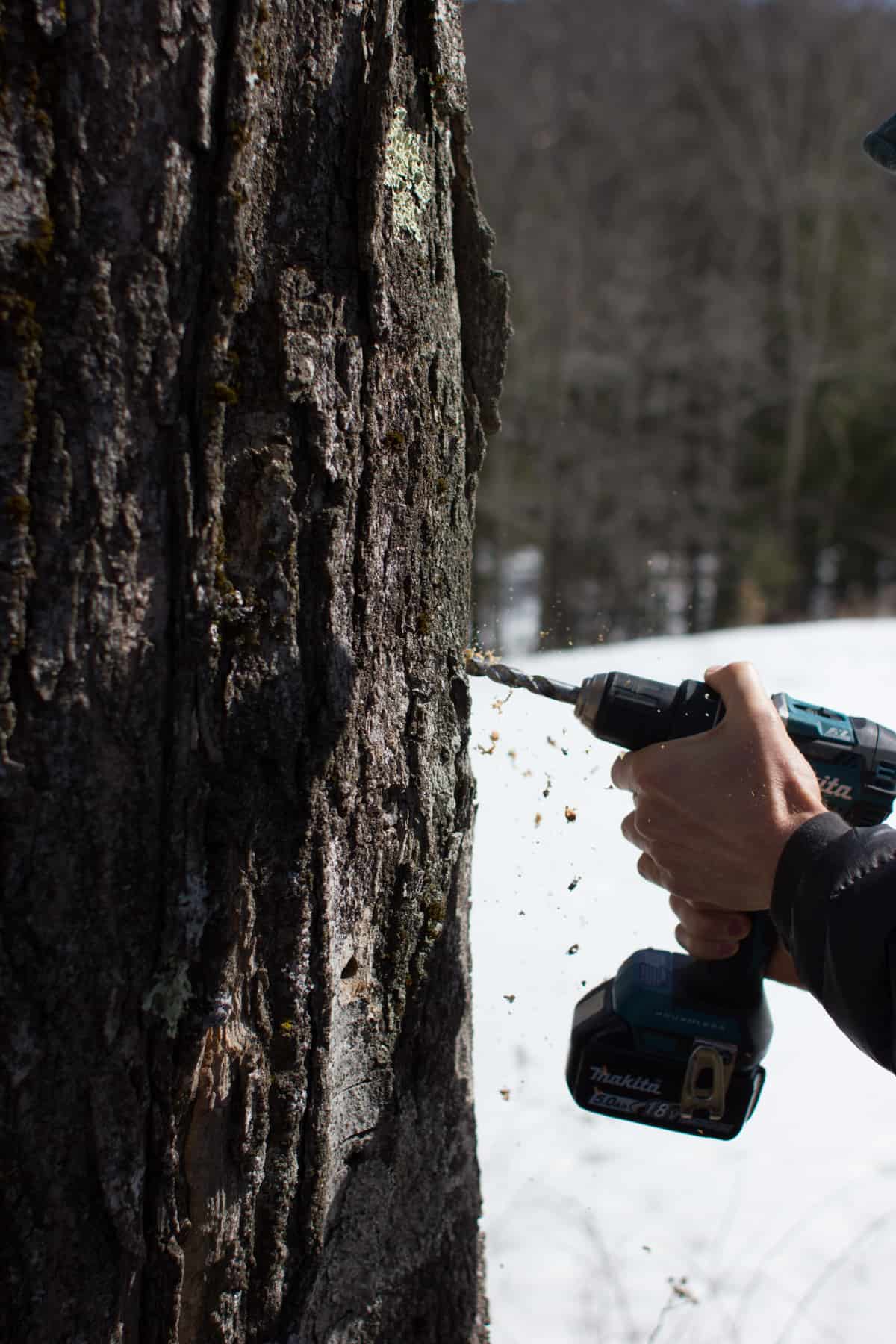 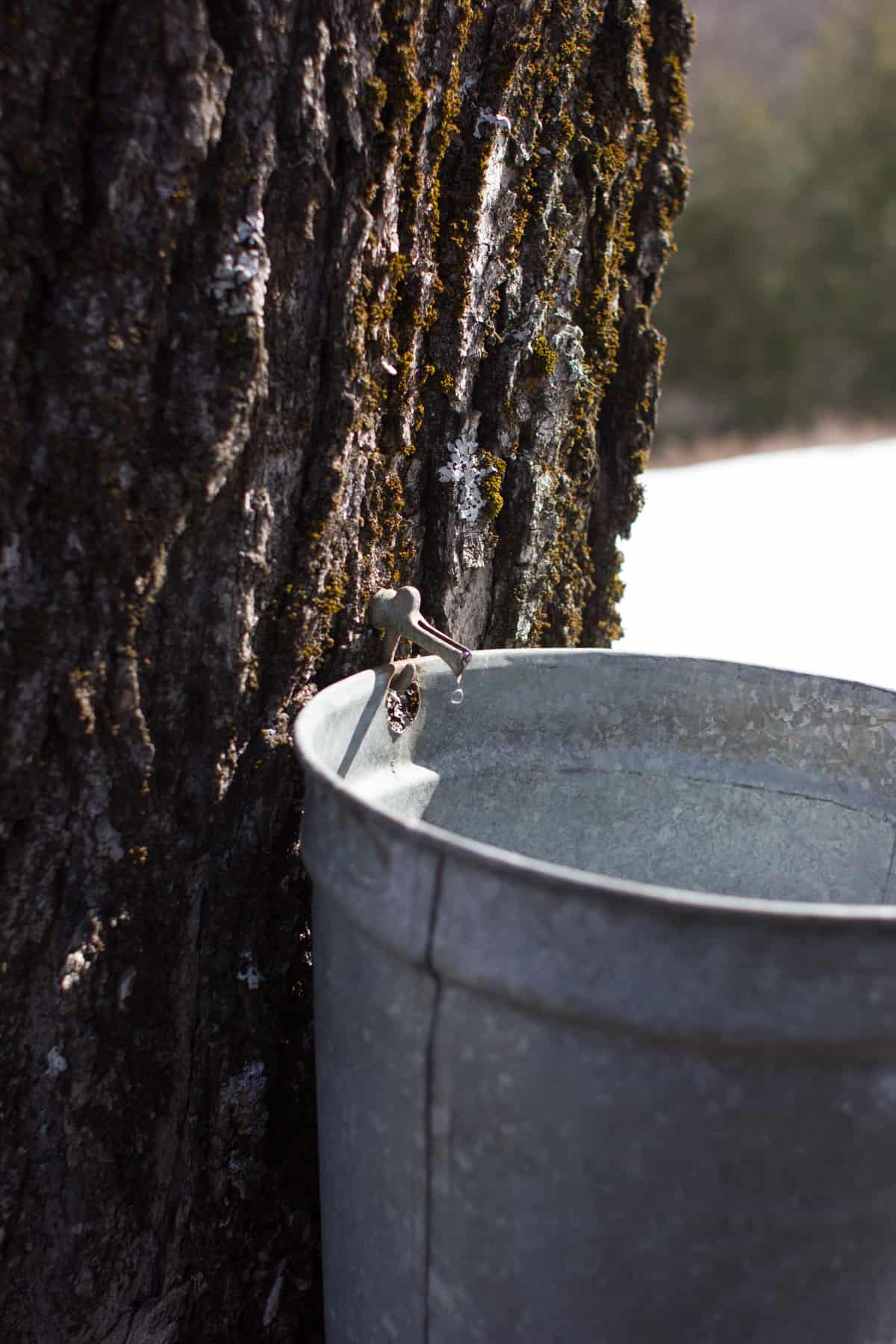 A small tap is inserted into the hole with a bucket hung underneath, and drop by drop the bucket fills up over the course of a day or so, depending on the weather conditions. There are more modern ways to collect sap, such as through a series of tubes strung through the trees, but the iconic metal bucket with a peaked lid to keep out debris is the classic method. 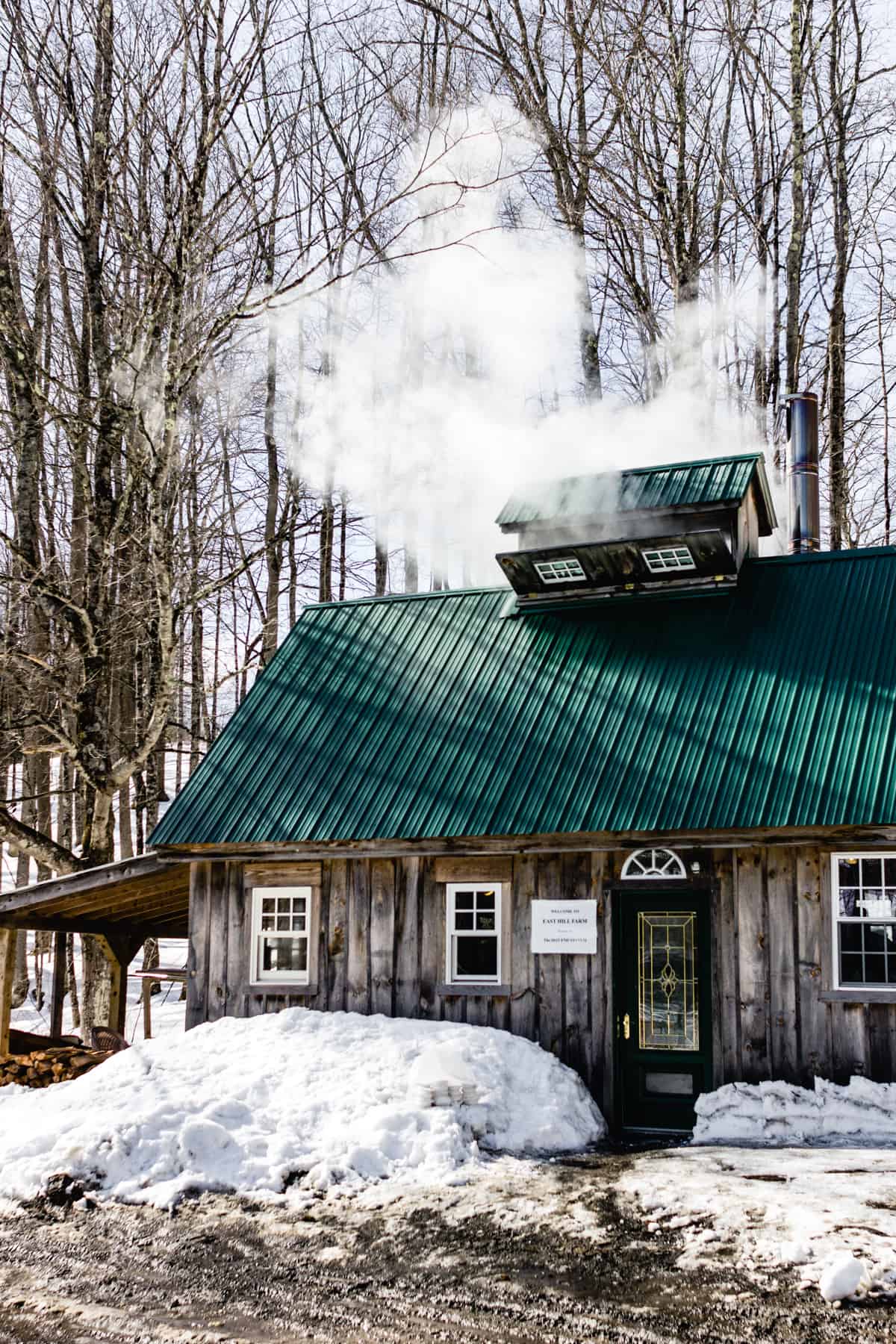 After the sap is collected, it's taken to a sugar house and boiled in a large, shallow pan until it reaches a certain ratio of sugar to liquid; in maple speak, it needs to reach a Brix level of 66-68 to be maple syrup. (The steam escaping the building in the photo above is the maple cooking!) The golden hue of the syrup comes from the caramelization of the sugars. Light syrup (previously called Grade A but now called Grade A Amber Color Rich Taste) comes at the beginning of the season when the sugars are the most concentrated and less boiling is needed to reduce the syrup to the correct consistency, so the syrup has less caramelization. As the season goes on and the sap becomes less concentrated with sugars, more boiling is needed to reduce the syrup, and more caramelization occurs resulting in darker syrup (which used to be called Grade B but is now called Grade A Dark Color Robust Taste). 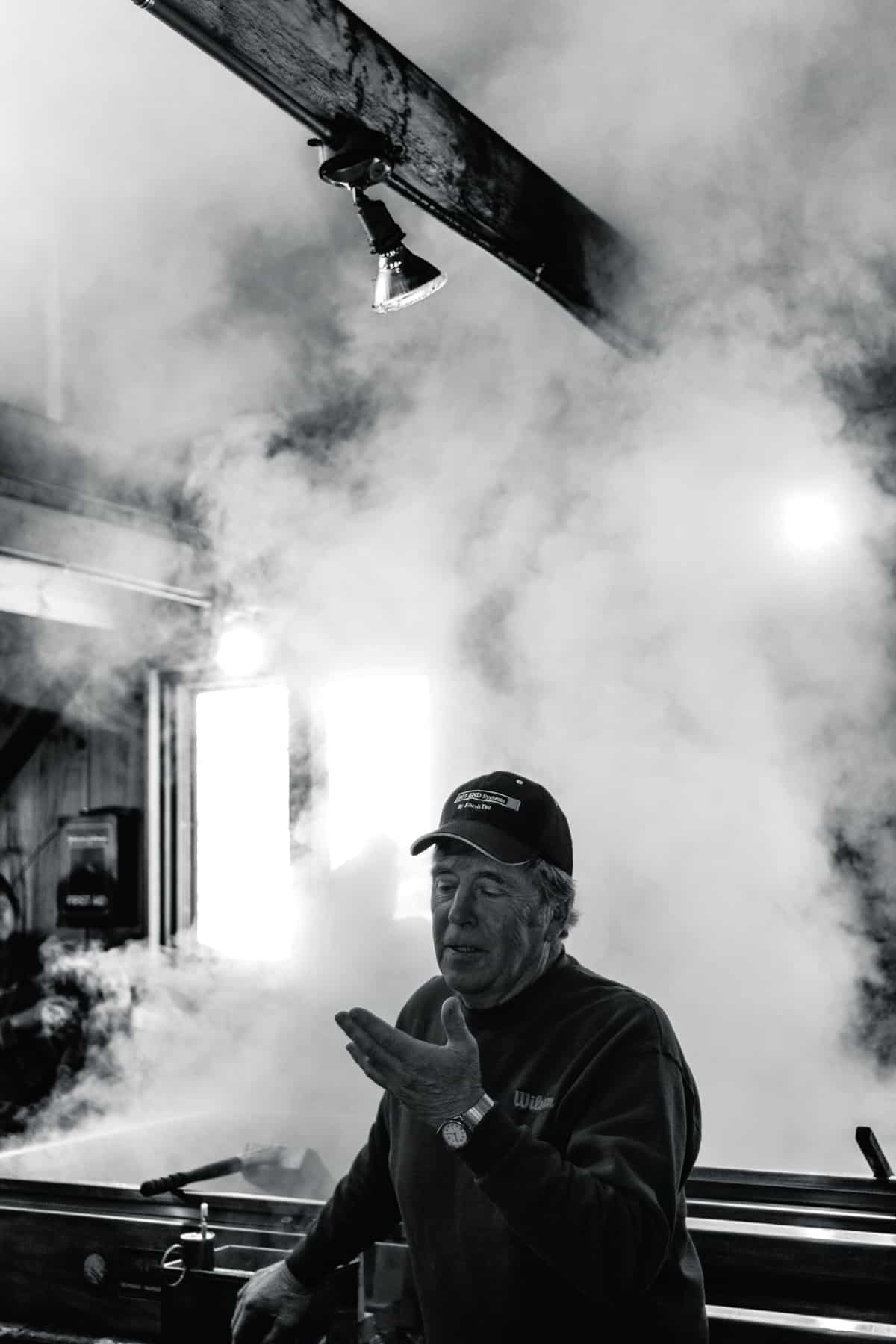 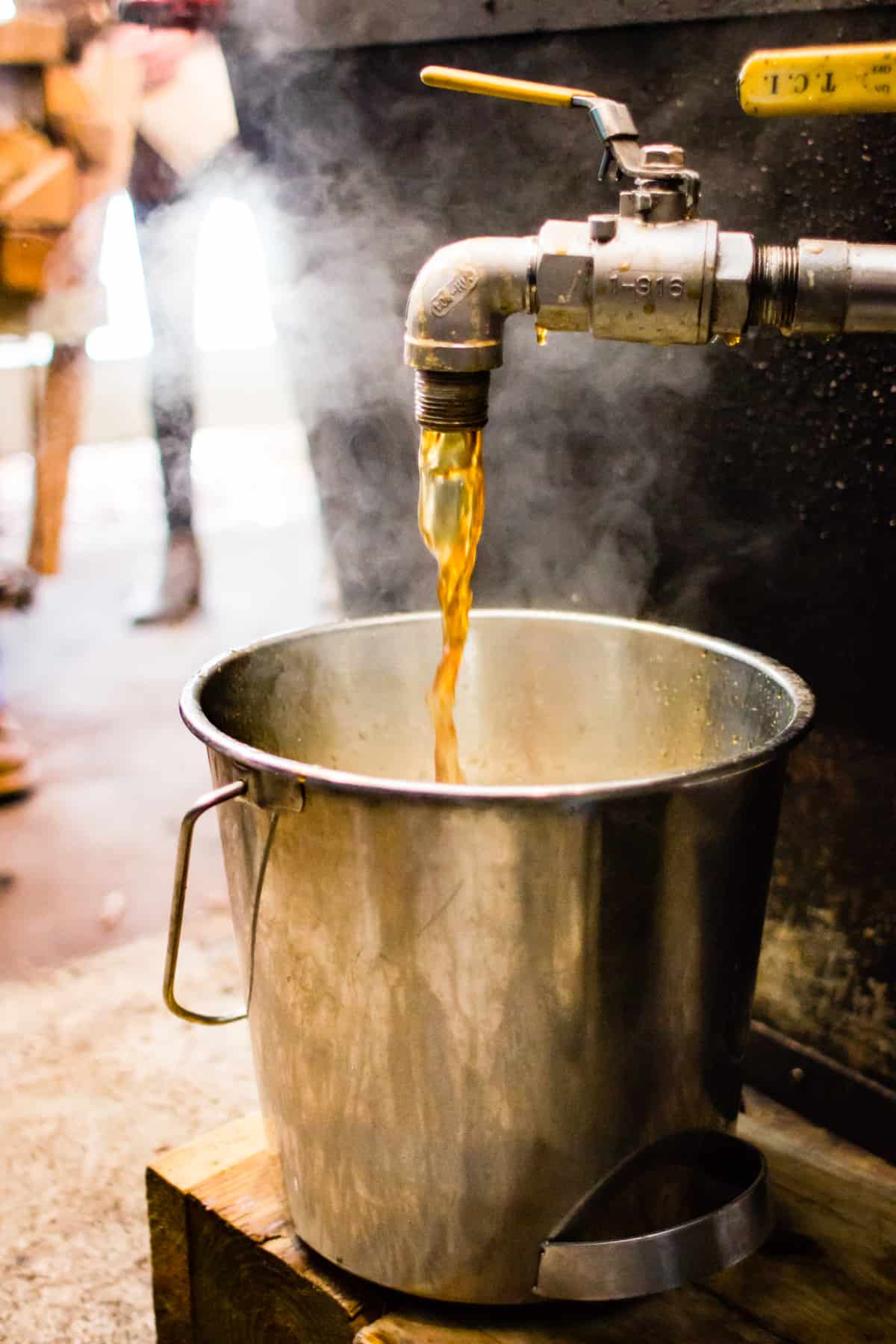 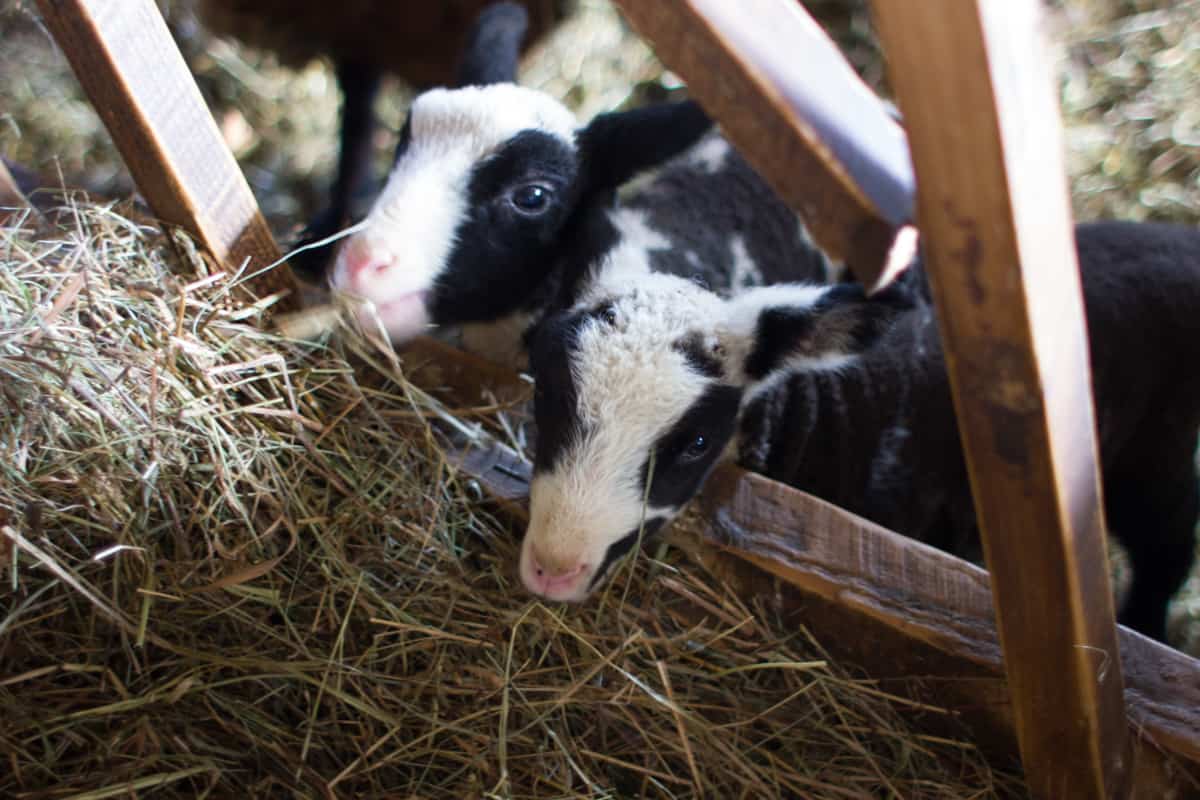 Next we headed to the Bascom and Coombs facility to see the larger maple production. 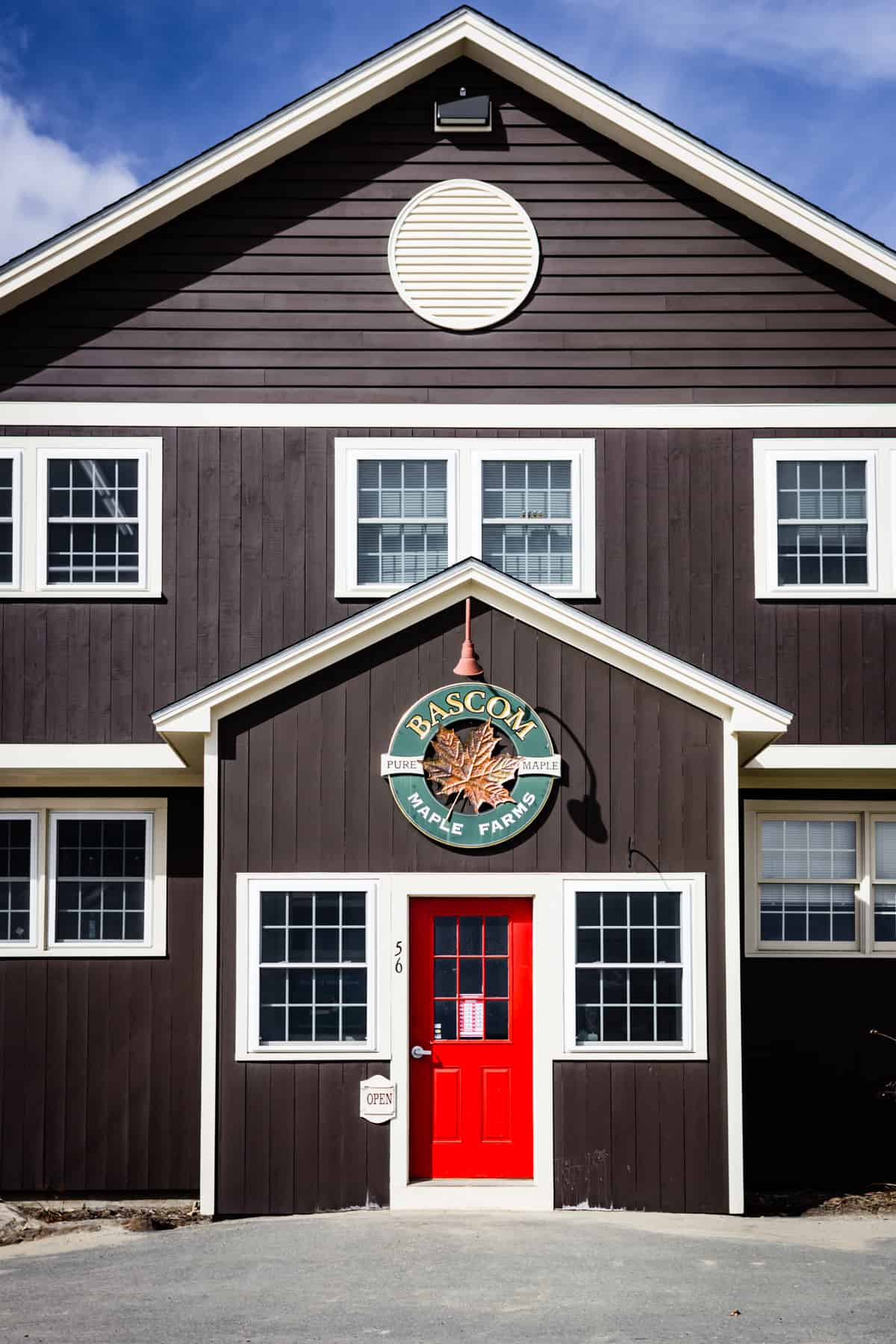 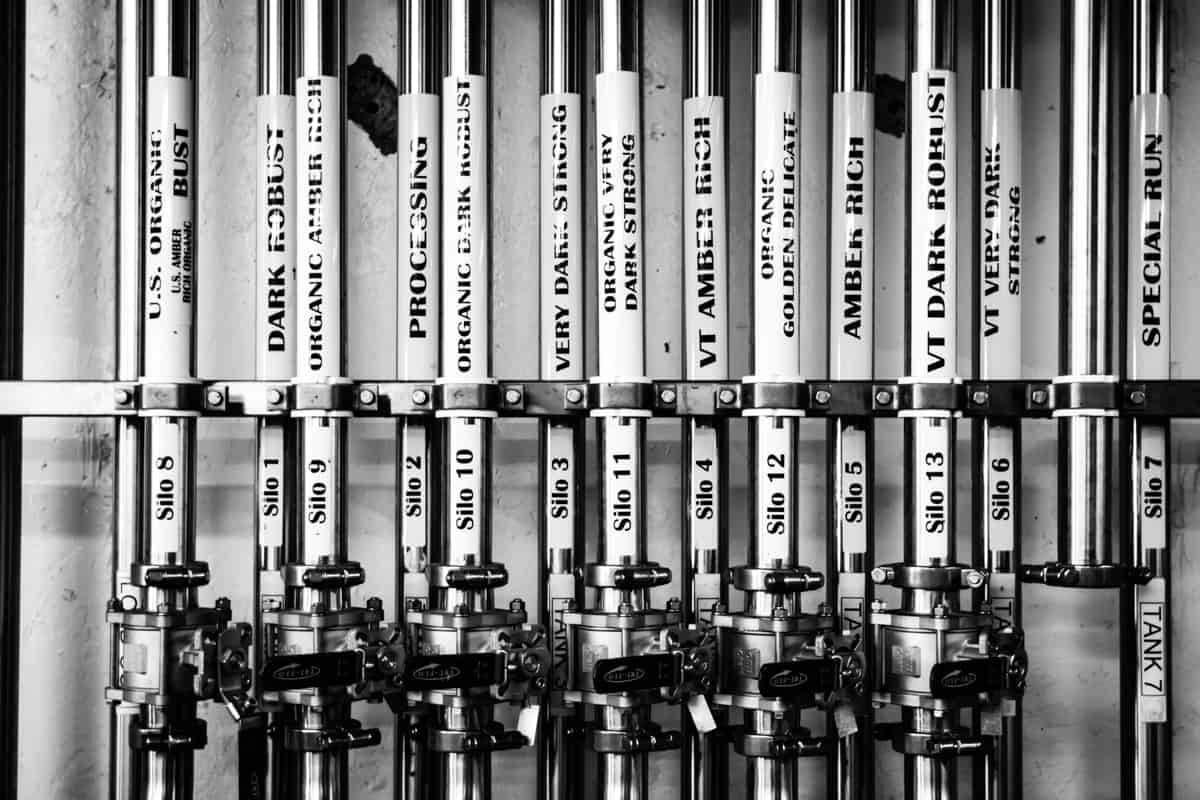 There are many different grades of syrup and, like wine, sometimes the grades are blended together to get the best flavor. 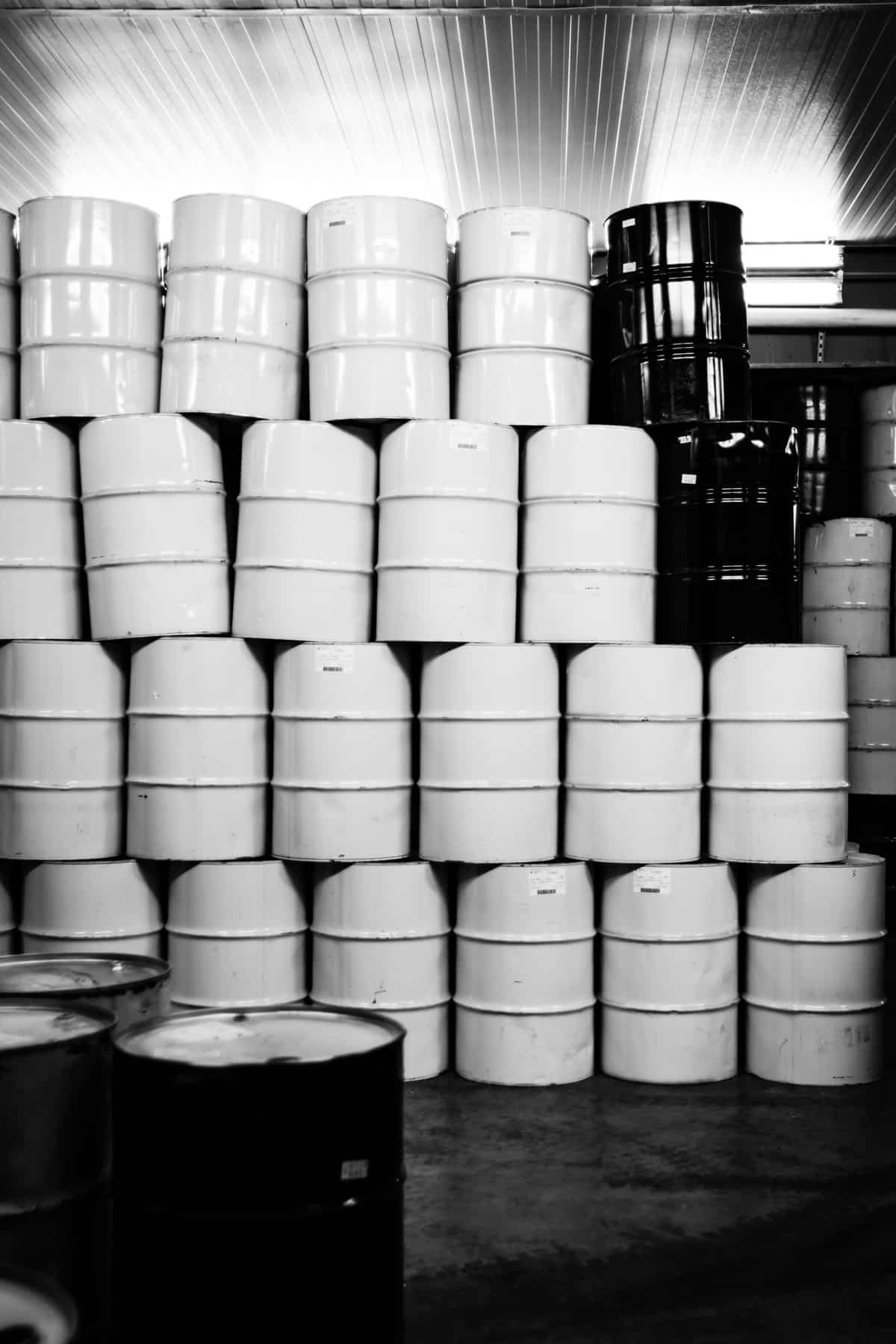 So much maple syrup in those barrels!

Maple sugar is made by evaporating the liquid from maple syrup, leaving behind free-flowing granules of maple goodness. It isn't cheap, but knowing the laborious process it takes to make it, it's worth every penny. If you love the taste of maple, I'd highly recommend the splurge.

My favorite part of the trip (besides Yoda snuggles, meeting Aysegul for dinner, cross-country skiing with our SF transplant friends, and a quick stop in the Berkshires) was when Cindy treated us to Sugar on Snow. Maple syrup is boiled until it reaches the soft ball stage, then poured over a bowl of packed snow. The syrup hardens to the consistency of caramel candies when it hits the ice cream. The taste is intensely maple with an almost creamy mouthfeel, and the snow absorbs some of the syrup, becoming a maple slushy of sorts. It's traditional to take your sugar on snow with a side of dill pickles to break up the sweetness. From my point of view, it's a tradition worth moving to the other side of the country to enjoy every year. 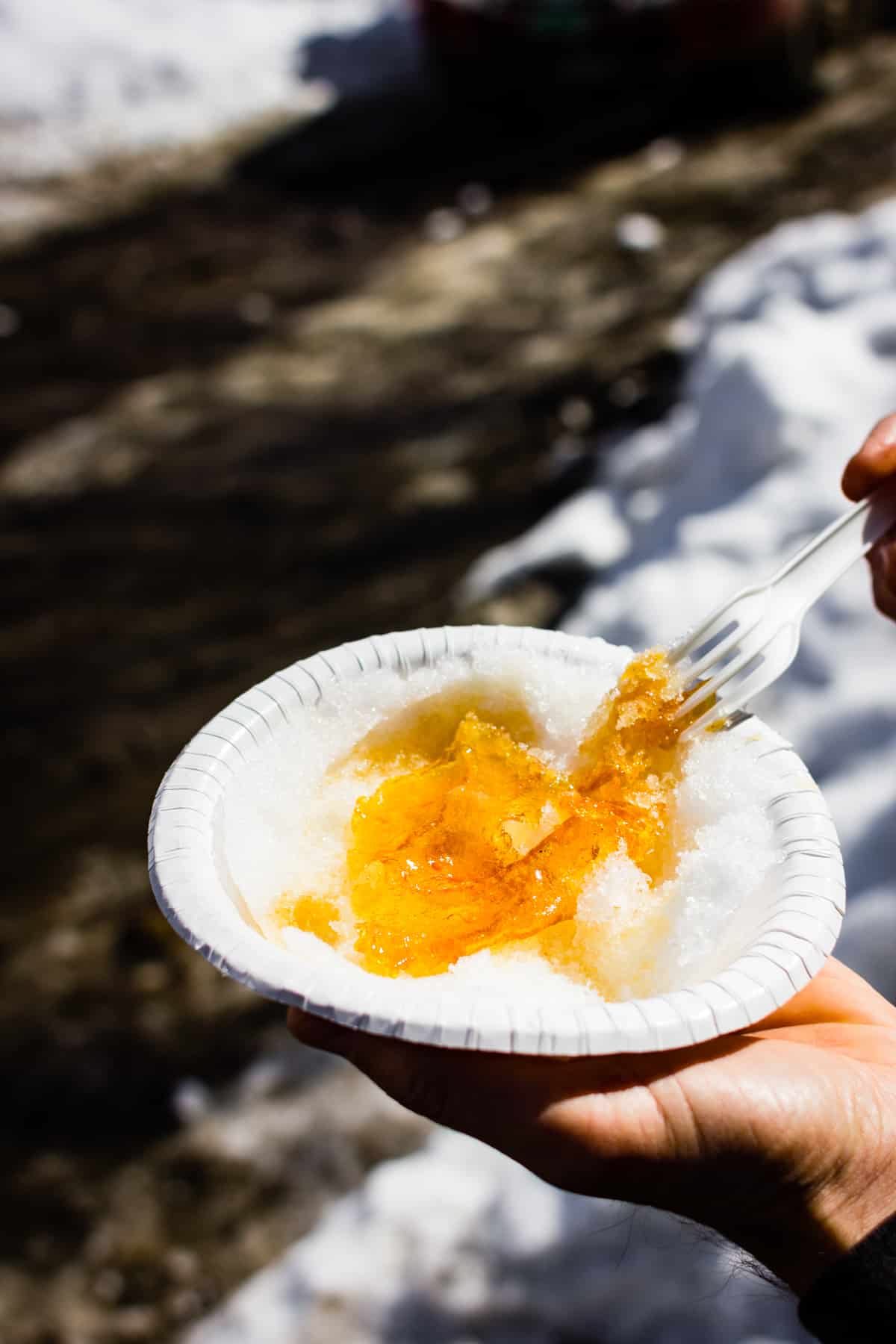 Back in San Francisco with a fierce sugar on snow craving, I churned up a batch of this ice cream. Maple sugar is the superior choice when making ice cream as it adds all the sweetness and maple taste with none of the ice-forming liquid of maple syrup. The result is so intensely maple-flavored, it almost tastes like fake maple flavor or extract. 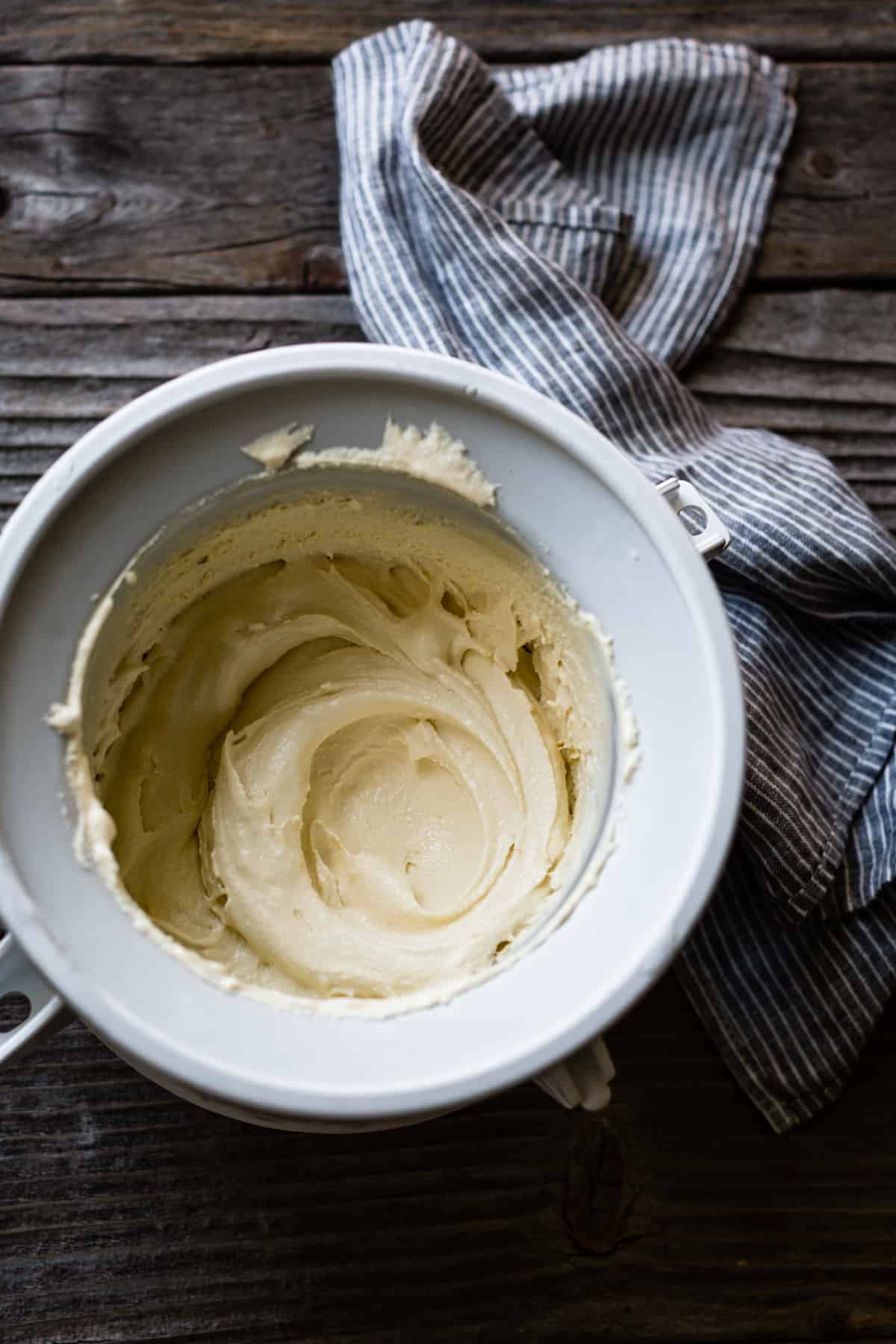 Pour a little maple syrup over the top and you've got yourself "sugar on snow on sugar on snow" as we've been calling it. 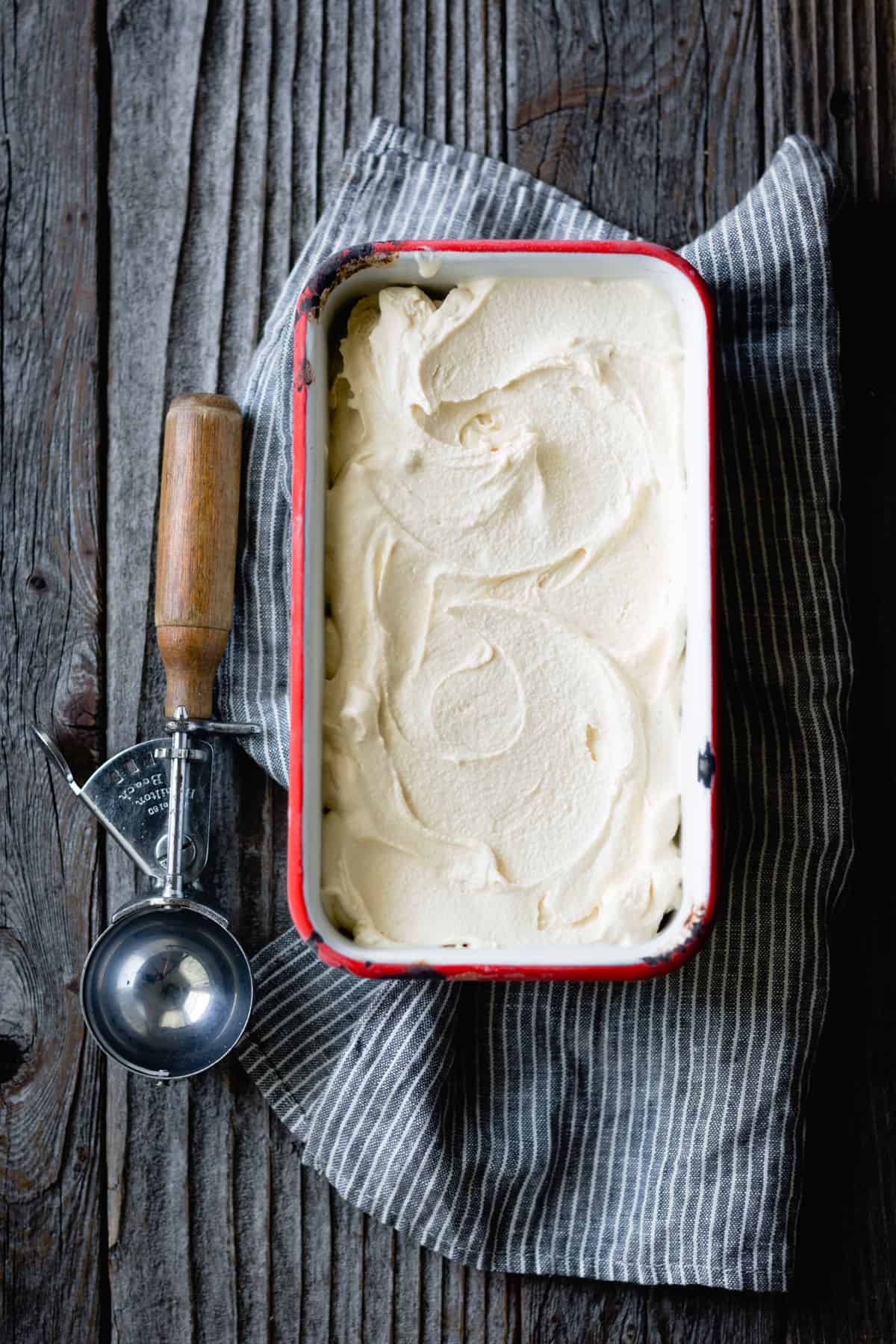 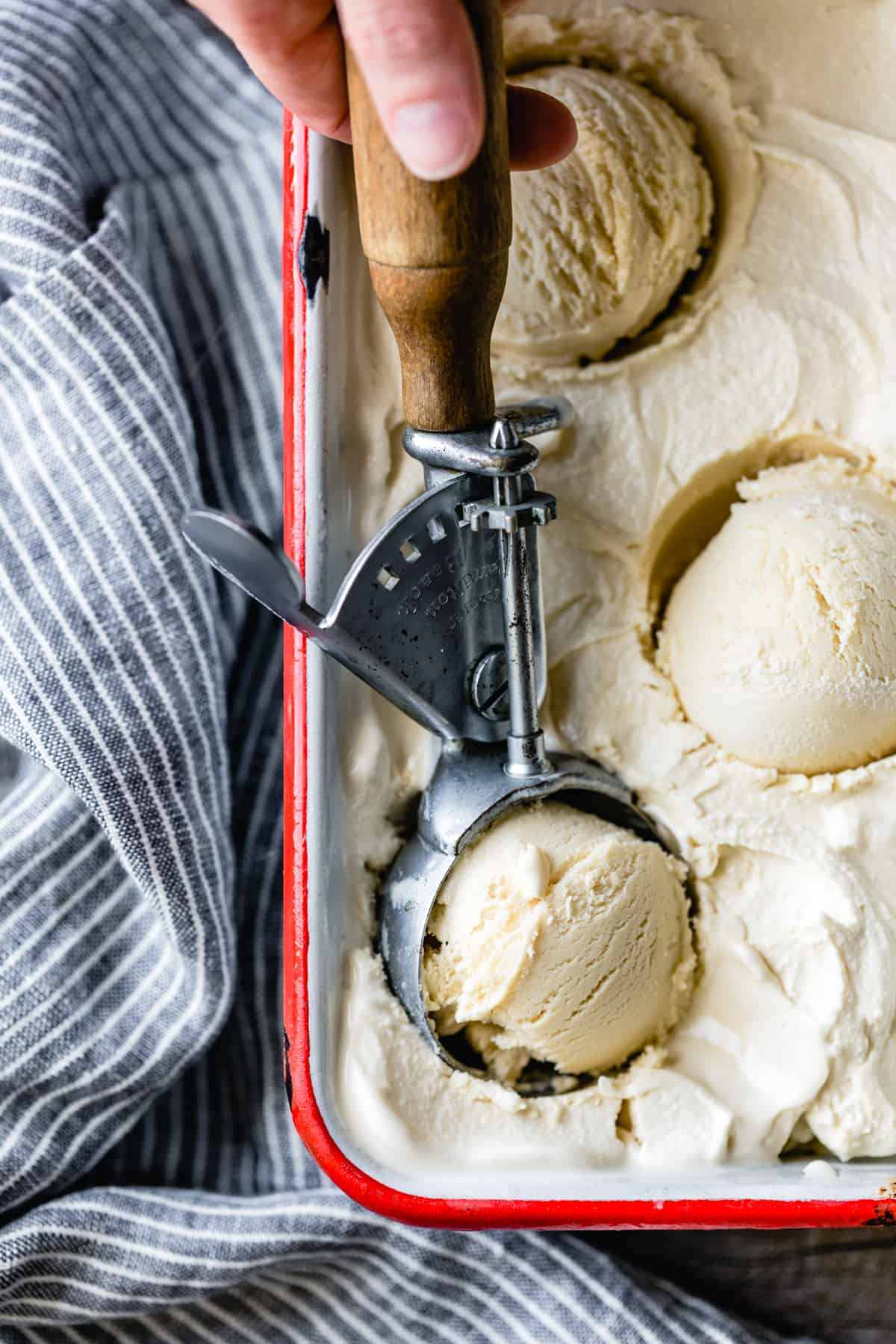 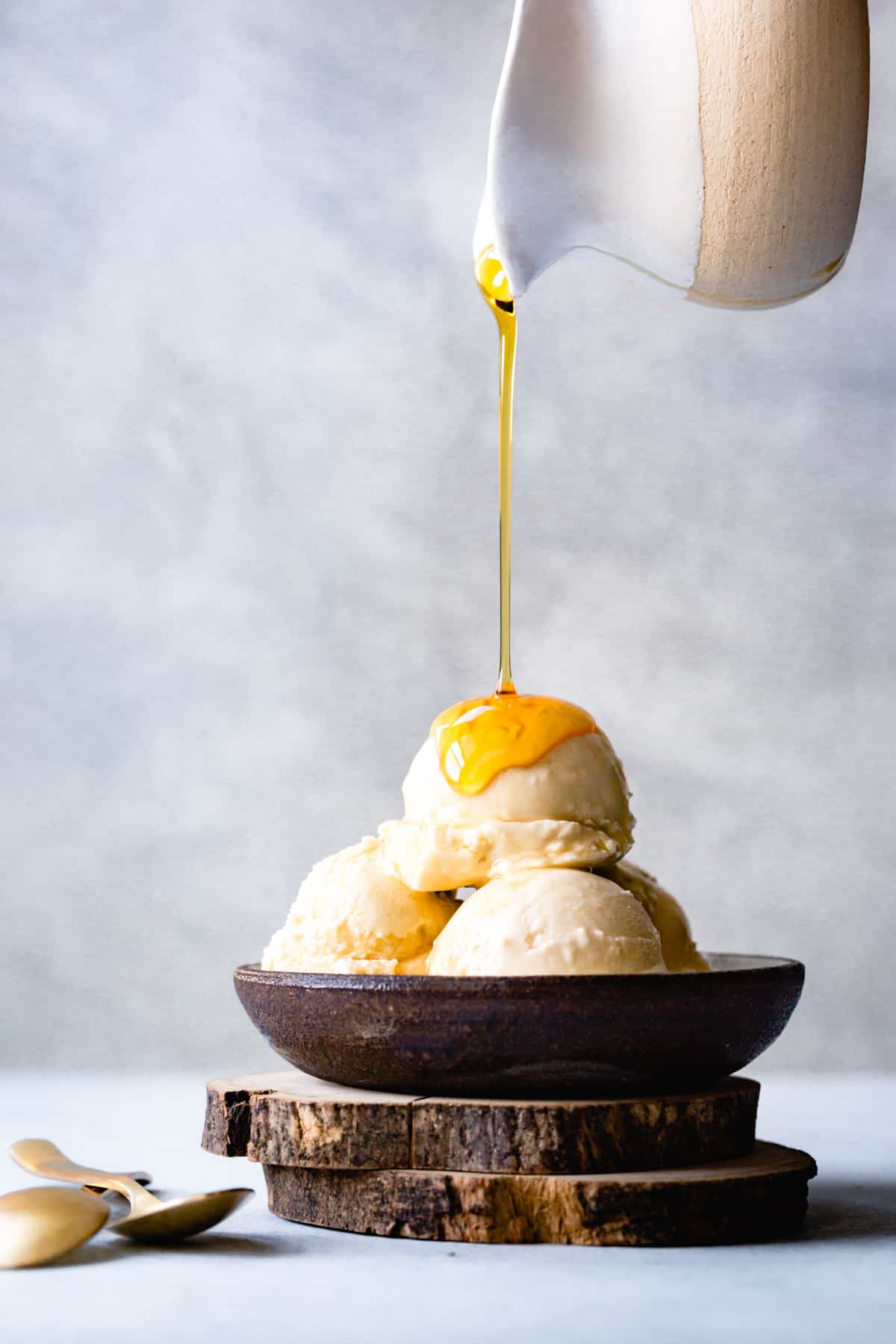 *Thanks for reading! For more Bojon Gourmet in your life, follow along on Instagram,Facebook, or Pinterest, or subscribe to receive new posts via email. And if you make this maple sugar ice cream, I’d love to see! Tag your Instagram snaps @The_Bojon_Gourmet and  #bojongourmet.* 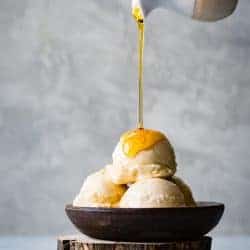 This ice cream free of refined sugars and made with few ingredients, so be sure to use the highest quality dairy and eggs you can find. Maple sugar is a splurge, but it's the sweetener to use here - maple syrup will result in a more icy ice cream that won't have the same creamy mouthfeel. If maple syrup is what you've got, try making this Maple Bourbon Pecan Ice Cream instead. I use the ice cream maker attachment for my KitchenAid stand mixer and it works like a charm. Nutritional values are based on one of eight servings. 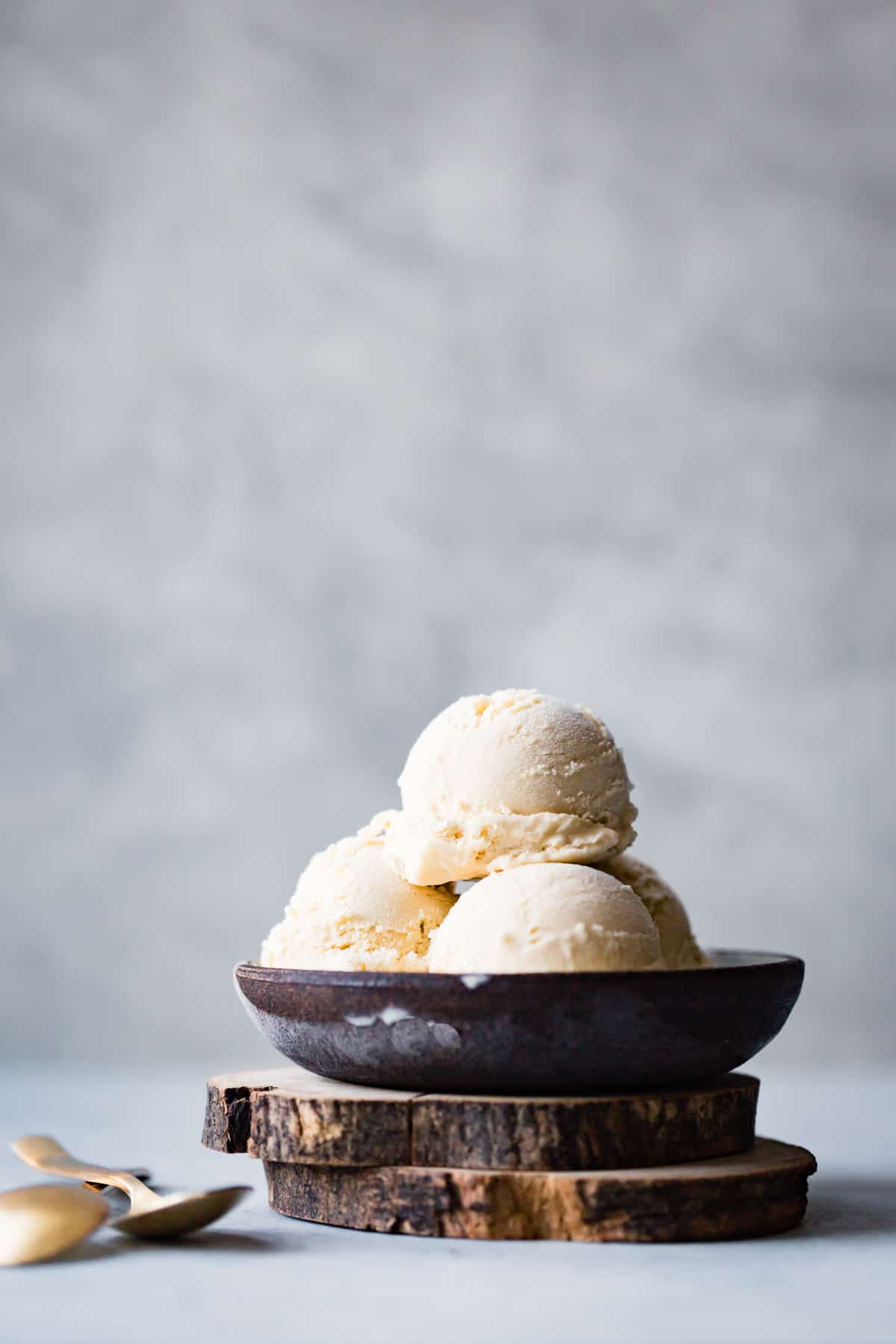