Rooibos blended with fresh peaches and vanilla bean makes a refreshing soda to enjoy on its own or, preferably, poured over coconut milk ice cream for vegan floats. 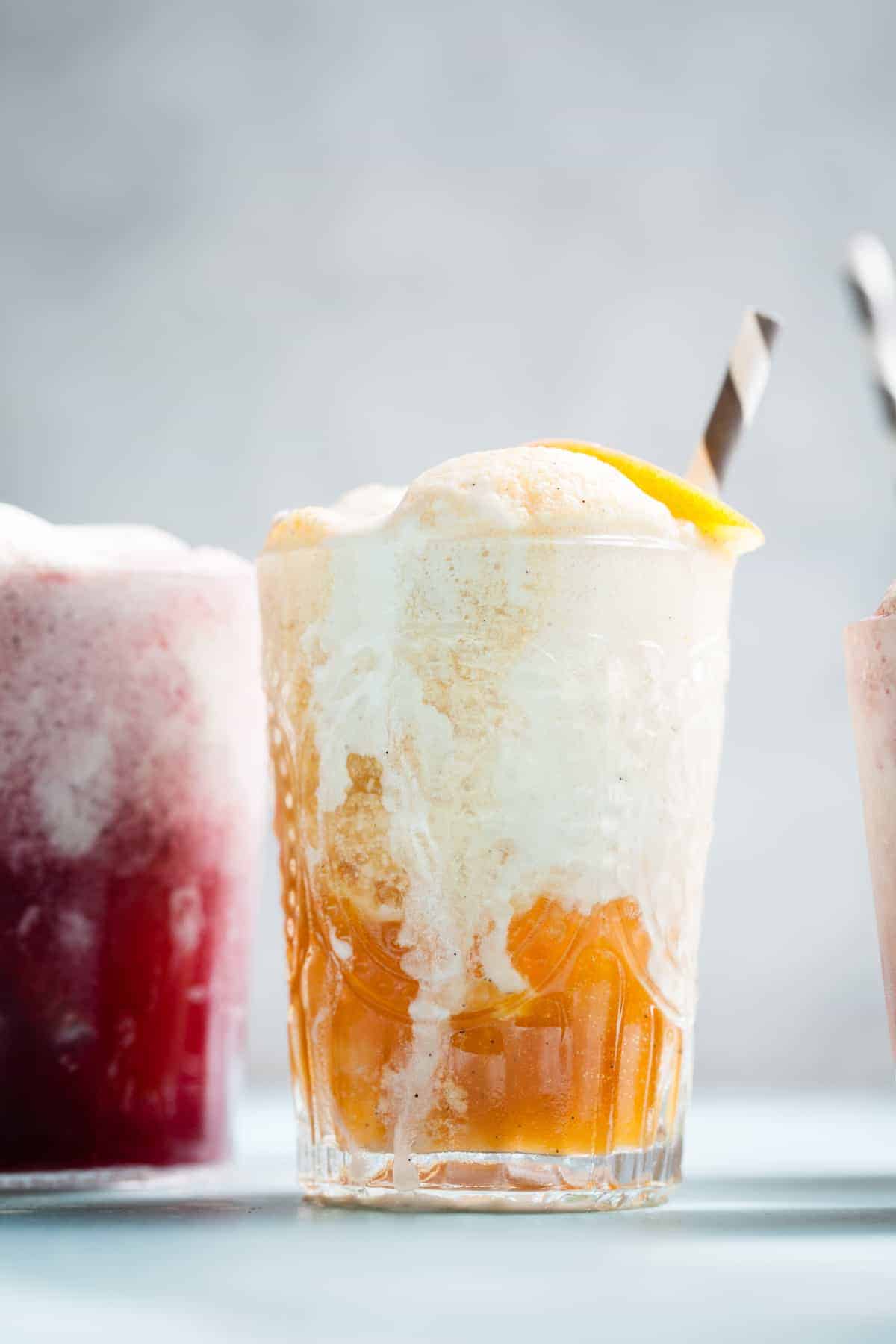 On July 20th I boarded a plane to Minnesota with Sarah and her family. This may not seem like a big deal, but it was my first time on a plane in about 4 years. Despite my love of travel, I look a lot like Meg Ryan at the beginning of French Kiss when airborne. For everyone’s sake, I tend to stick to transportation by car, boat, train, rickshaw… anything that stays close to the earth’s surface. But there was no getting around flying to Minnesota. So I braved my fear of planes, humidity, and mosquitos and off we went. 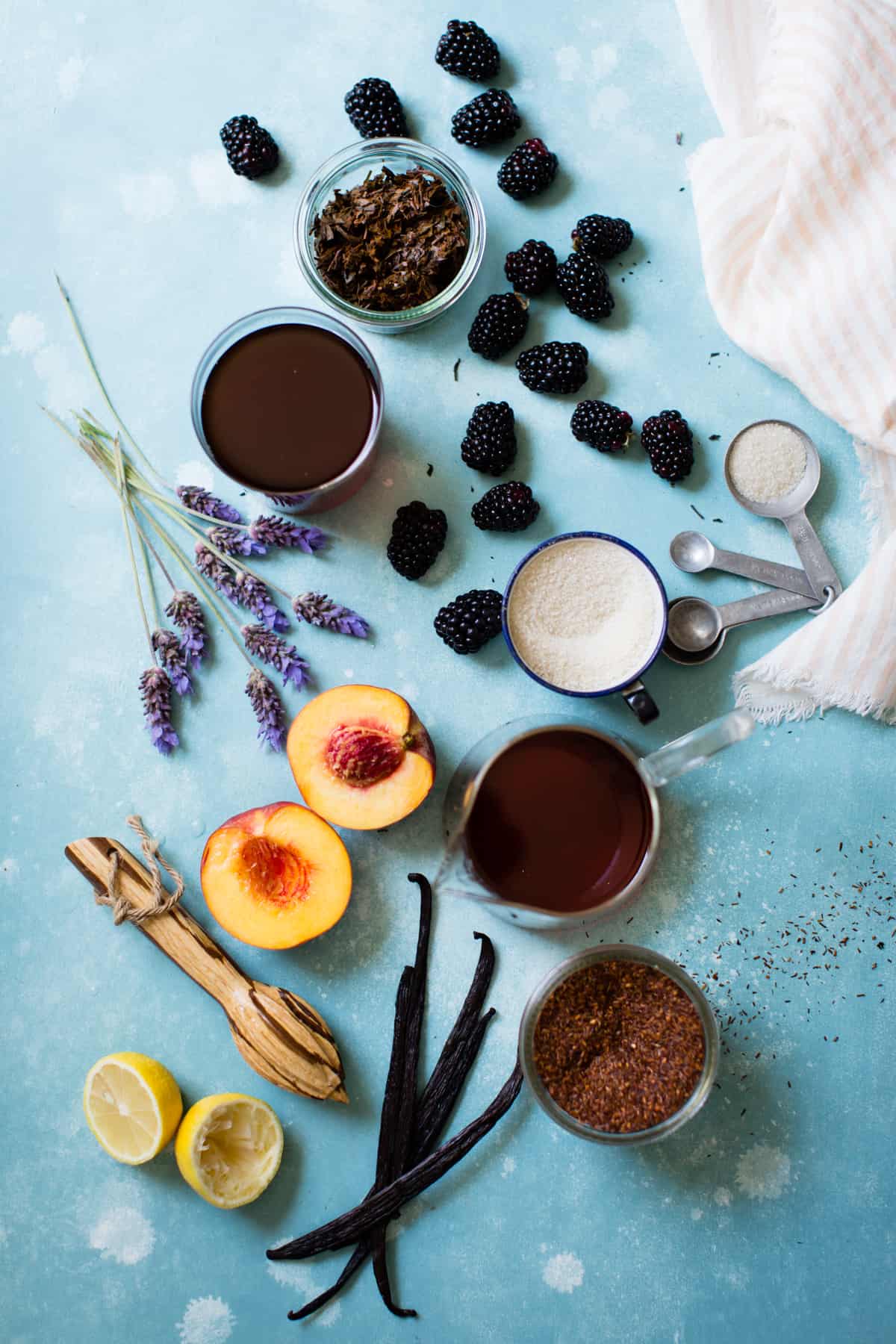 The lovely Amanda and Sherrie put together what promised to be a dreamy weekend of eats, drinks, and fun in the company of 10 incredible food bloggers from around the country. They’d rented a lakehouse near the Twin Cities, which happened to be in close proximity to where my dear friend Amelia moved earlier this year. I would go to Minnesota or die trying. 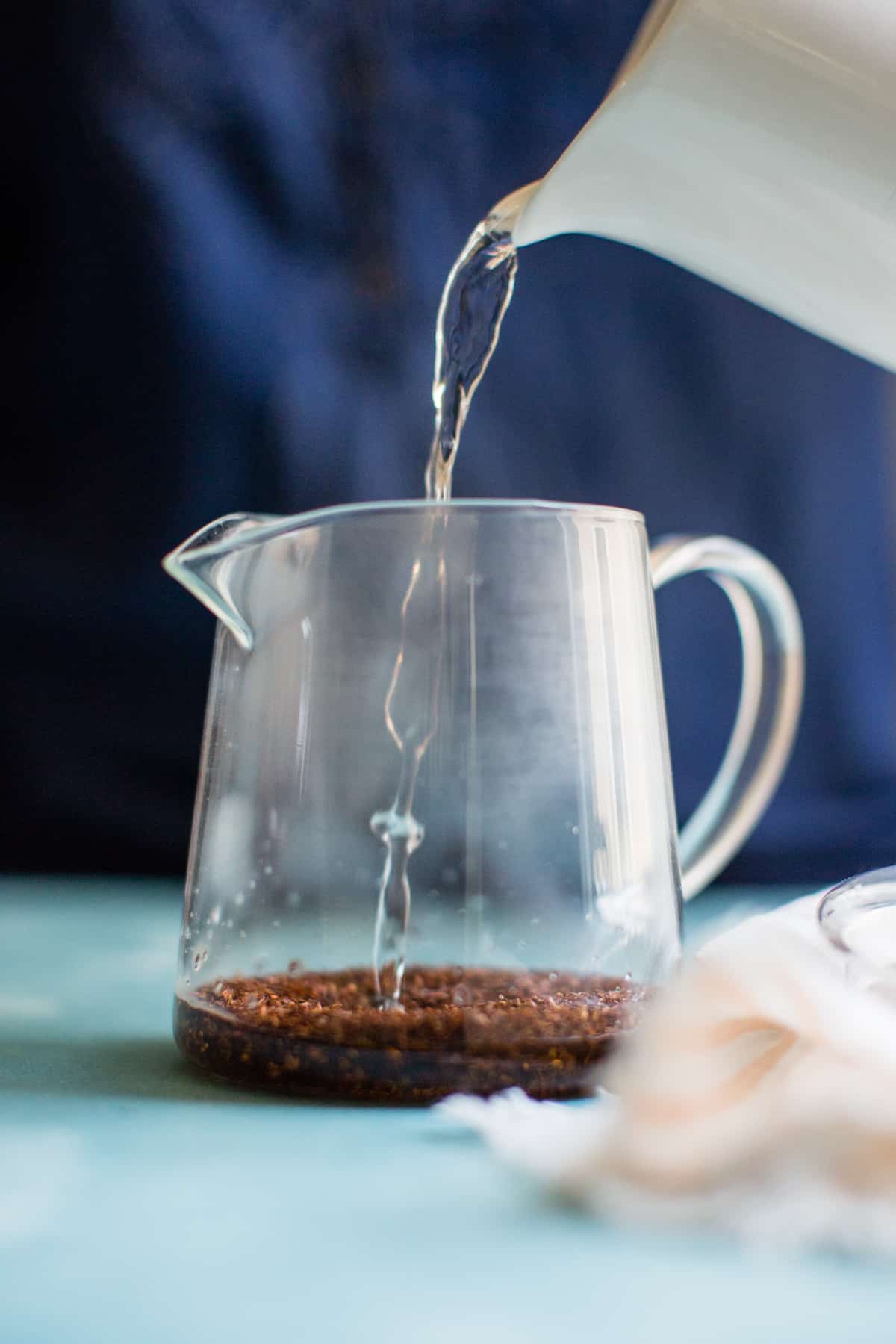 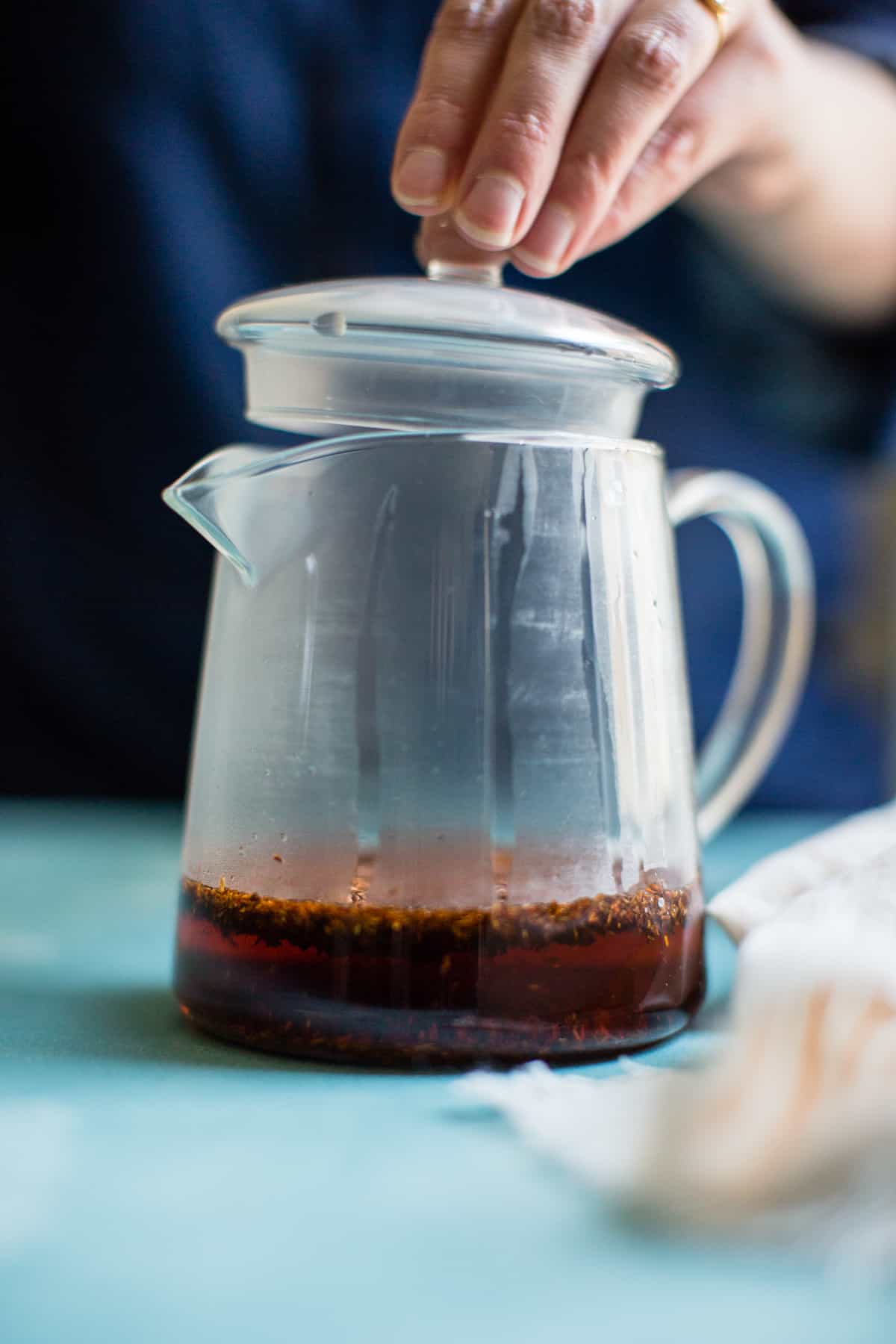 Three and a half hours and some good pharmaceuticals later, Amelia picked me up from the airport. There was a heatwave that week, but the warmth felt good after the chilly plane. “I’m in Minnesota,” I kept saying, “and I FLEW here!” Amelia asked me what I wanted to do my first night in Minneapolis. The answer was obvious. “ICE CREAM,” I said. I ate my feelings in the form of Halle Berry (frozen yogurt with a berry rose swirl) and Black (über-dark chocolate sorbet) at Milkjam, then in the form of a cheese plate and kombucha at Gyst fermentation bar, before heading back to Amelia’s for an epic joke-telling session and eventually passing out on her sofa in a drug-induced haze, the fan blowing warm air and white noise in through the window. 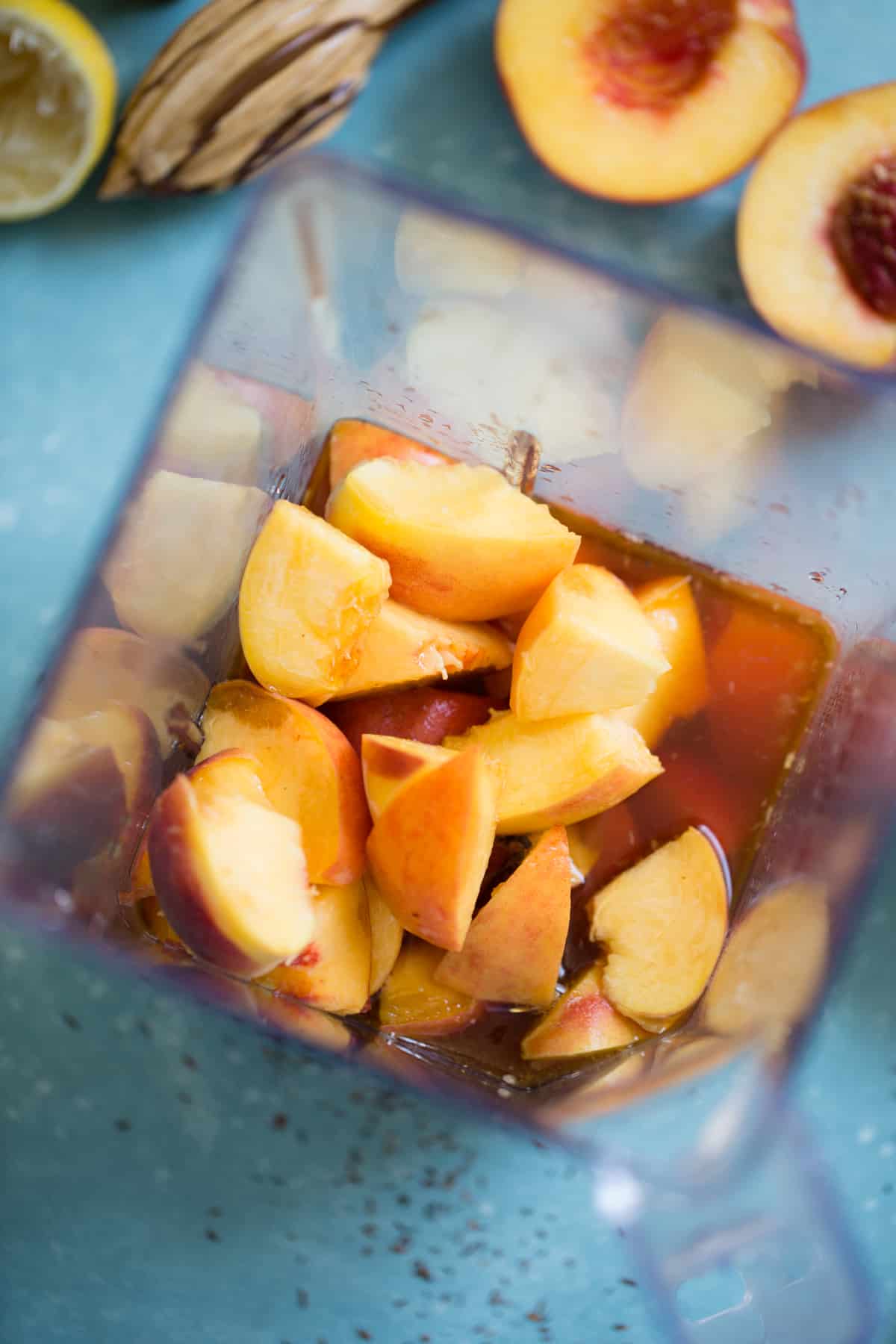 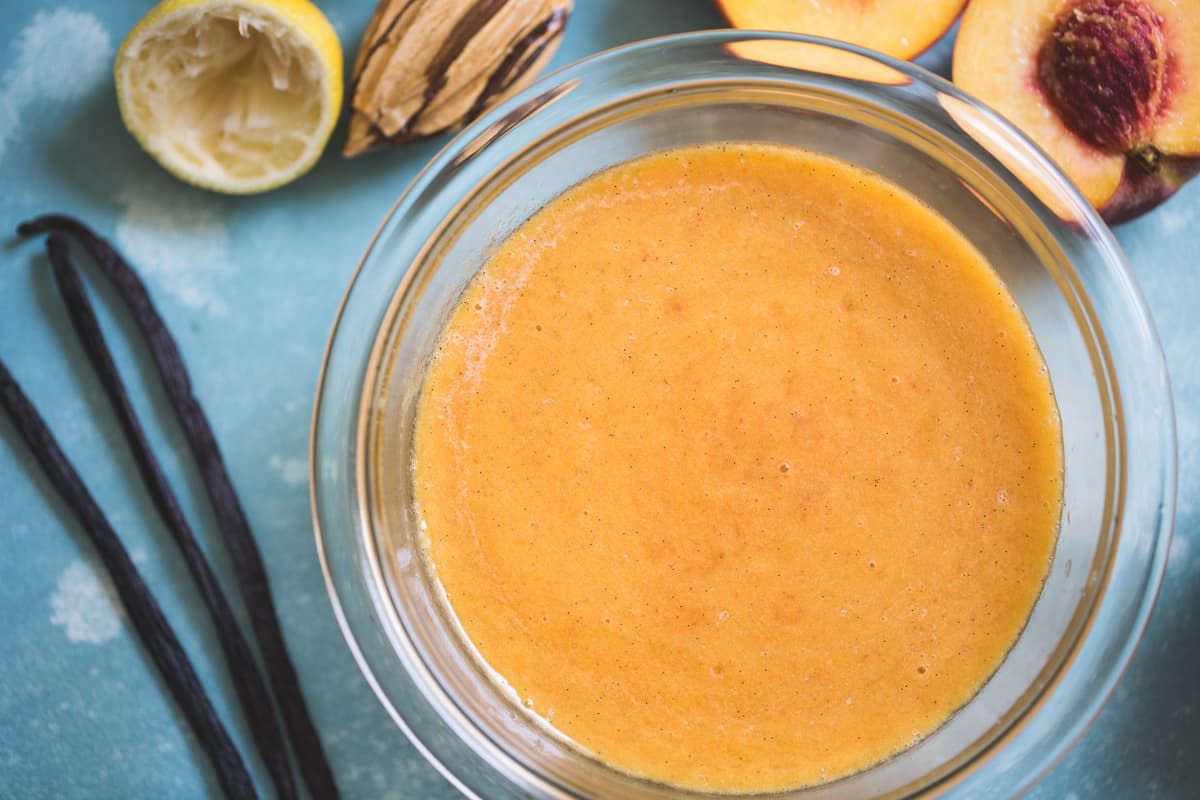 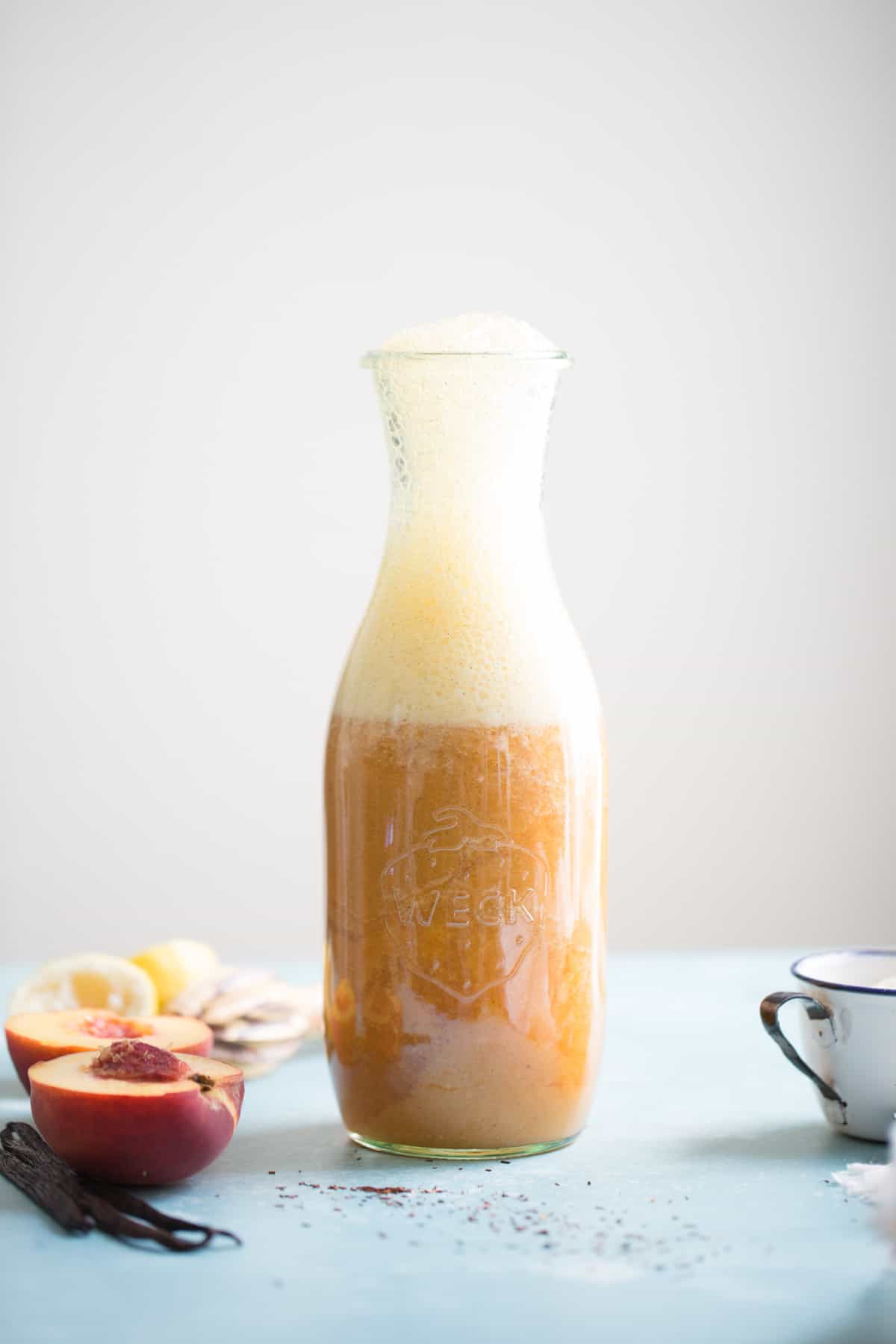 The next day, we headed to a lake house that Amanda and Sherrie had rented in preparation for an epic weekend full of blogger babes, food, and drink. I was so thrilled to meet some bloggers I’ve been following for years – Renee, Jayme, Kristan, Shelly, Emilie – and reunite with old friends like Amanda and Liz. #BossBabeFestMSP was pretty much the best vacation ever. We were pampered round the clock with delicious gluten-free vegetarian food, drink, and lots and lots of ice cream. In fact, I made it my mission to taste as much ice cream as I could. There was soft serve with olive oil and flaky salt at Lola, coconut soft serve at Wedge, buttermilk lemon bar and grapefruit sorbet at Pumphouse (my favorite!), tiny scoops of chocolate, blackberry, and creme fraiche at Izzy’s, and matcha mochi from the random Asian market we ended up at one stormy afternoon. 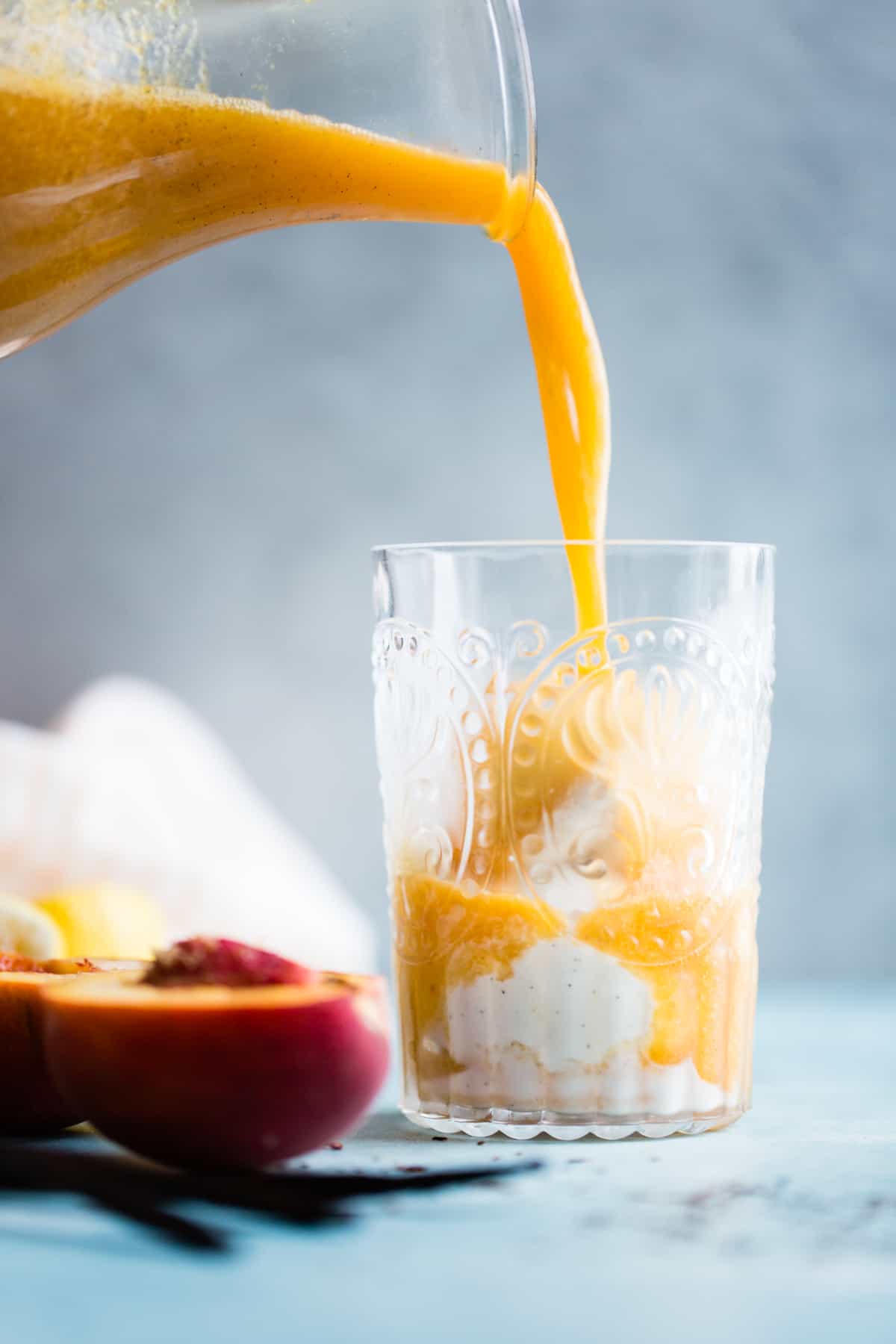 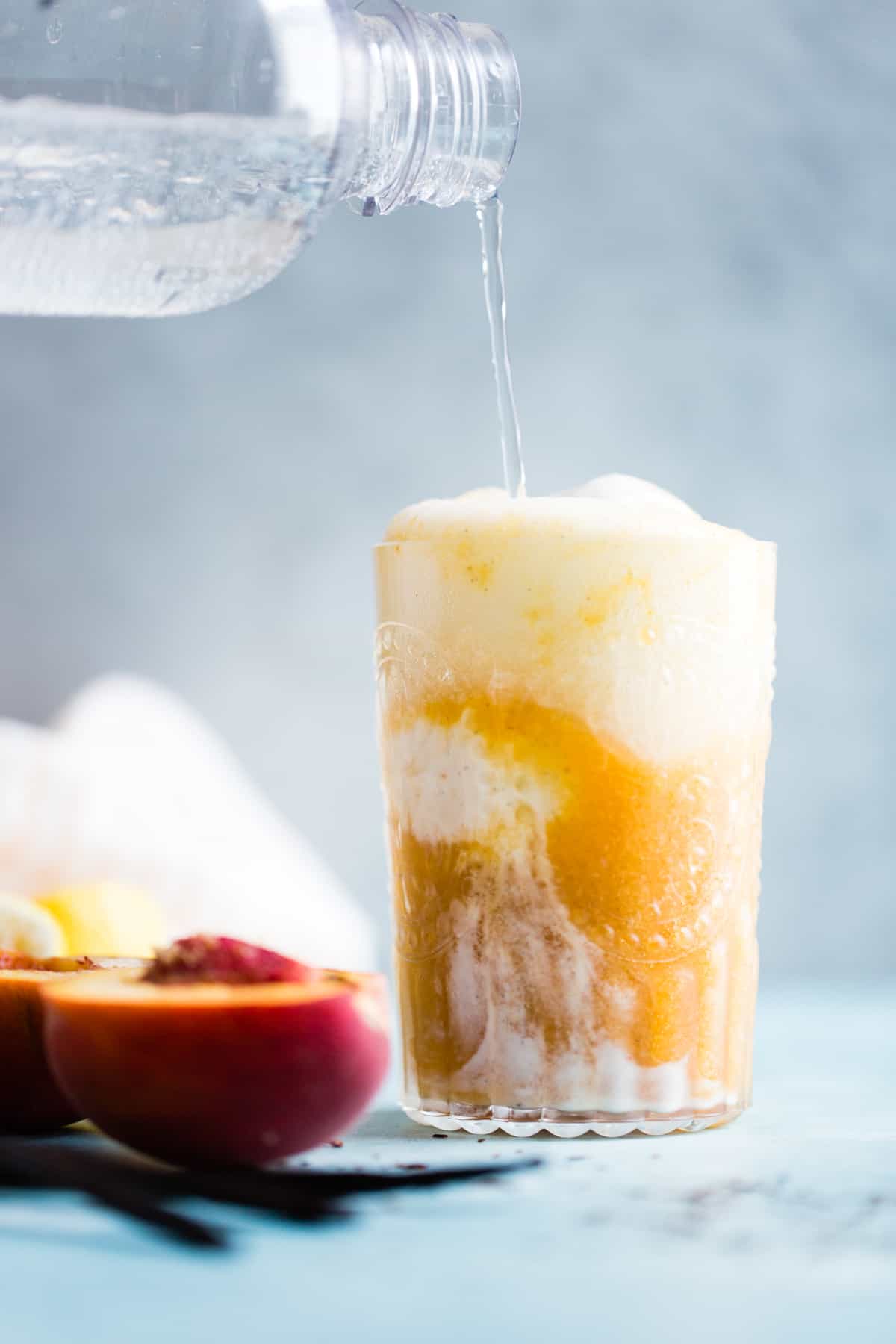 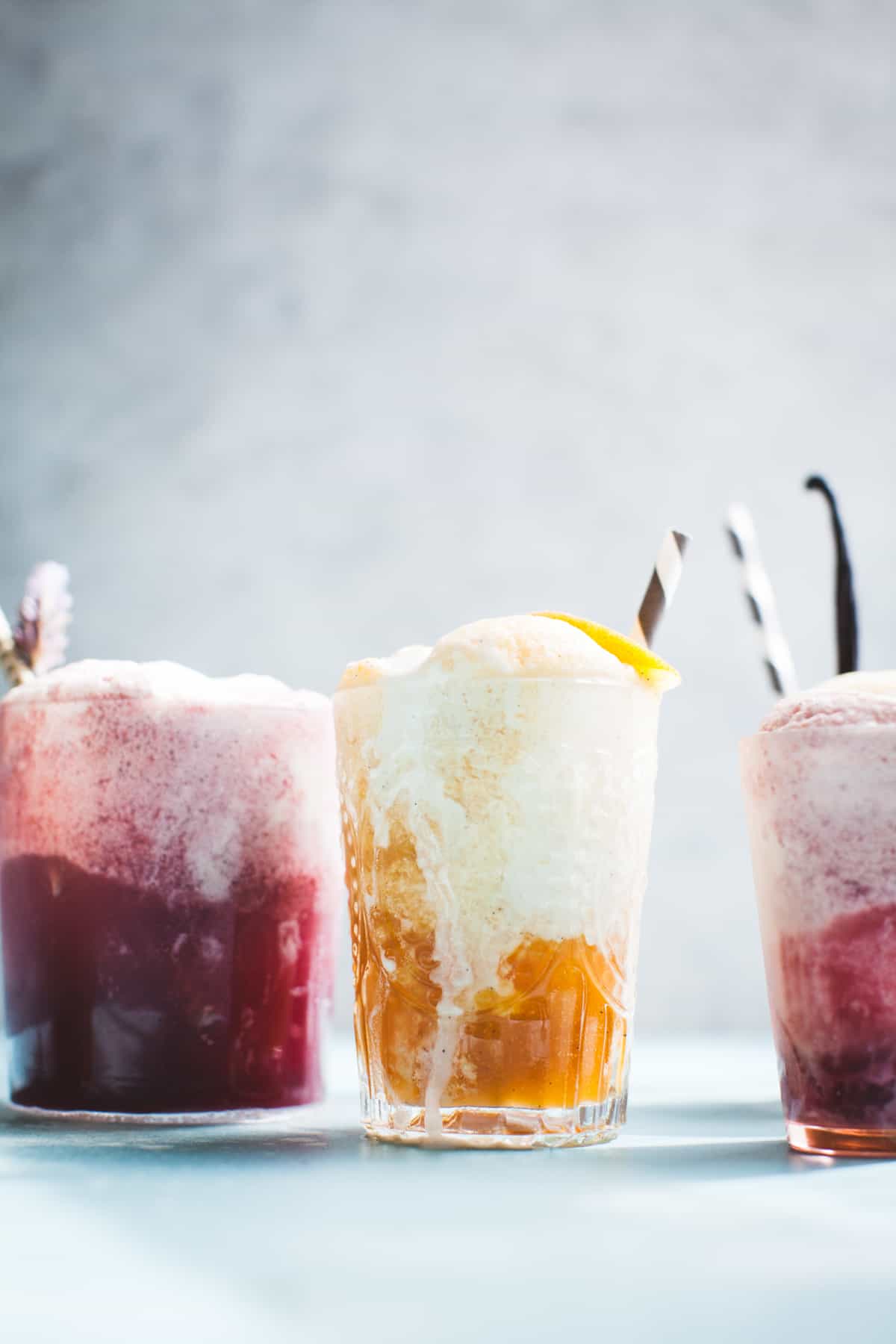 In addition to getting treated like princesses all weekend long, we got goody bags loaded with delicious treats from Quinn, Grace Green Beauty, Jered’s Pottery, A Heirloom, Encha Organic Matcha, Le Creuset, and some crazy good chai almond butter from Big Spoon Roasters. 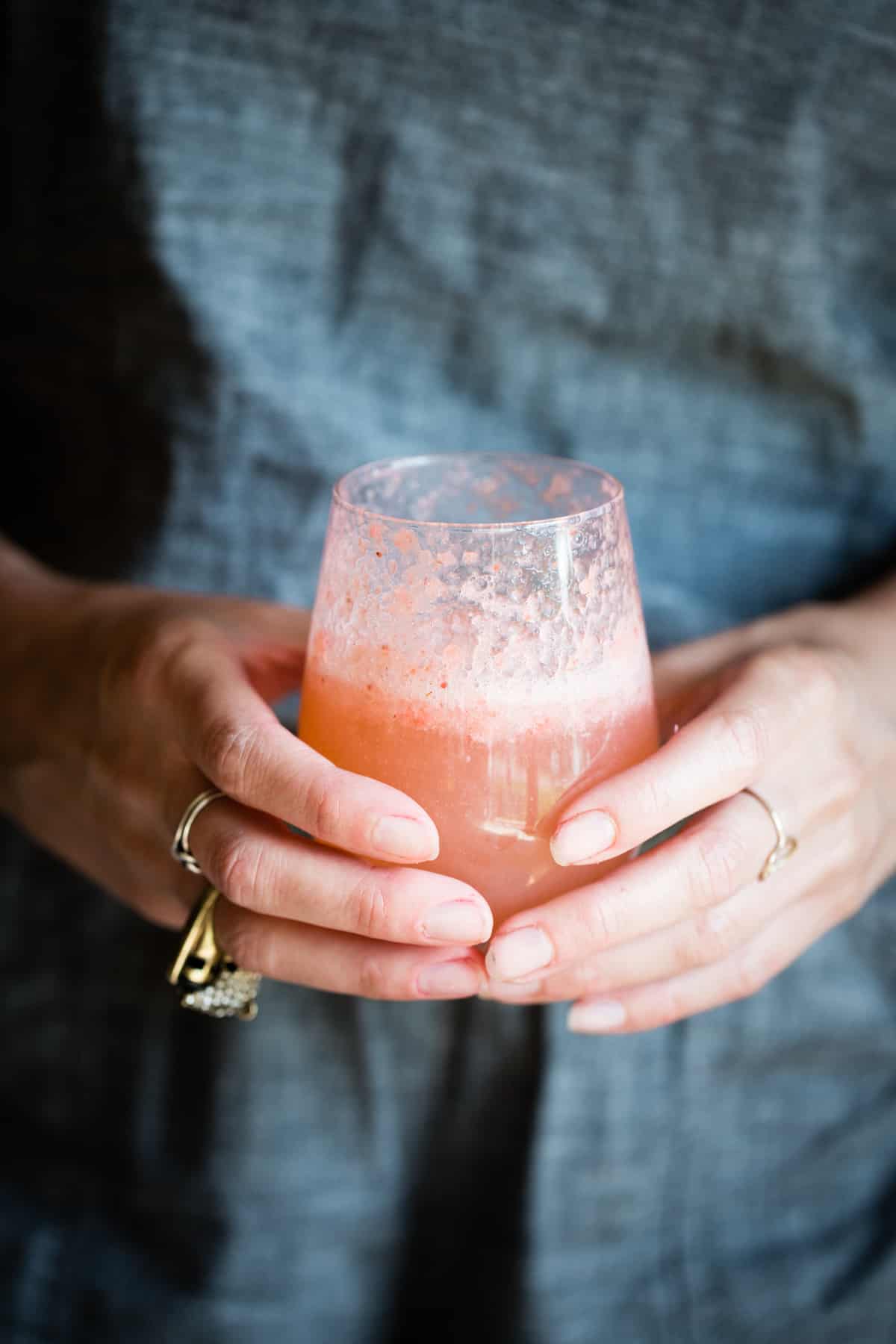 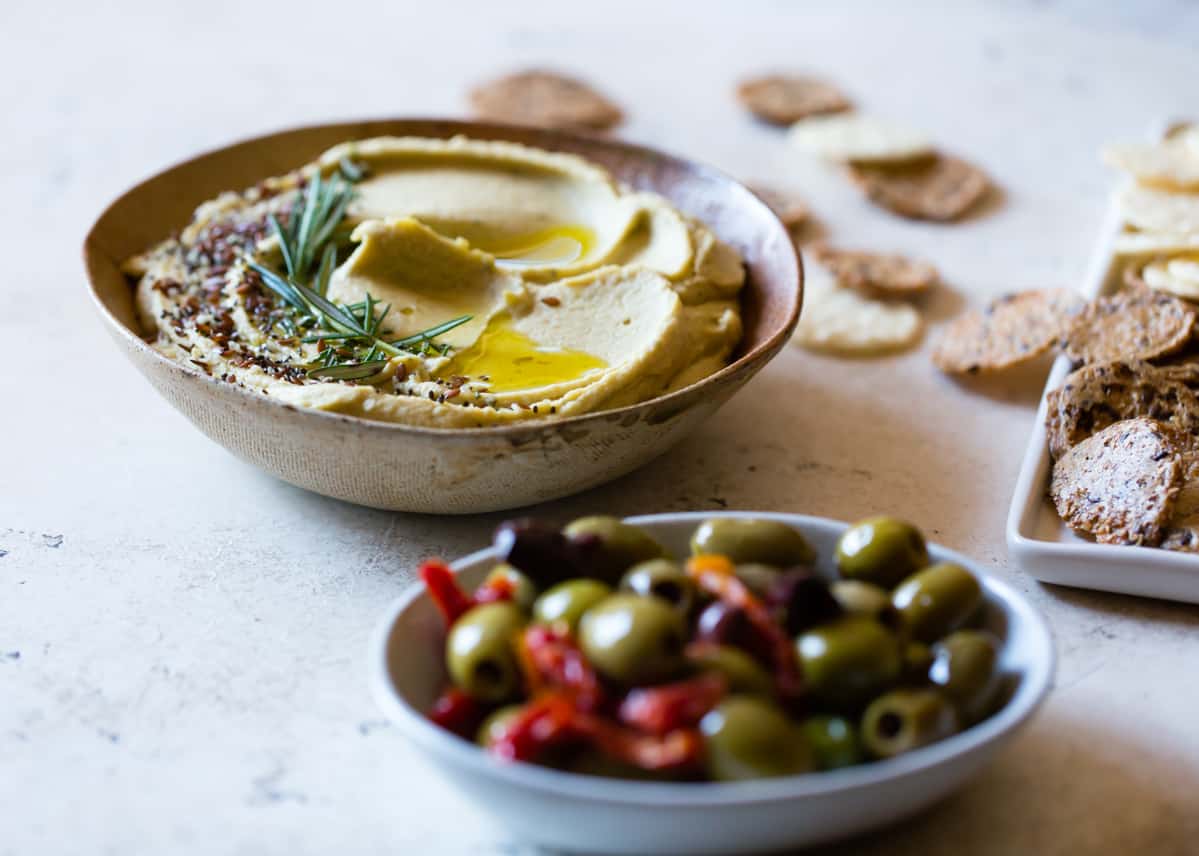 After the trip, I stayed on a few extra days to explore the town with Amelia. There were morning cheese tastings, waffles, pho, mocktails, more ice cream, pasta pasta and more pasta, and late night games of Gin Rummy over whiskey listening to Bessie Smith with the fan on full blast. 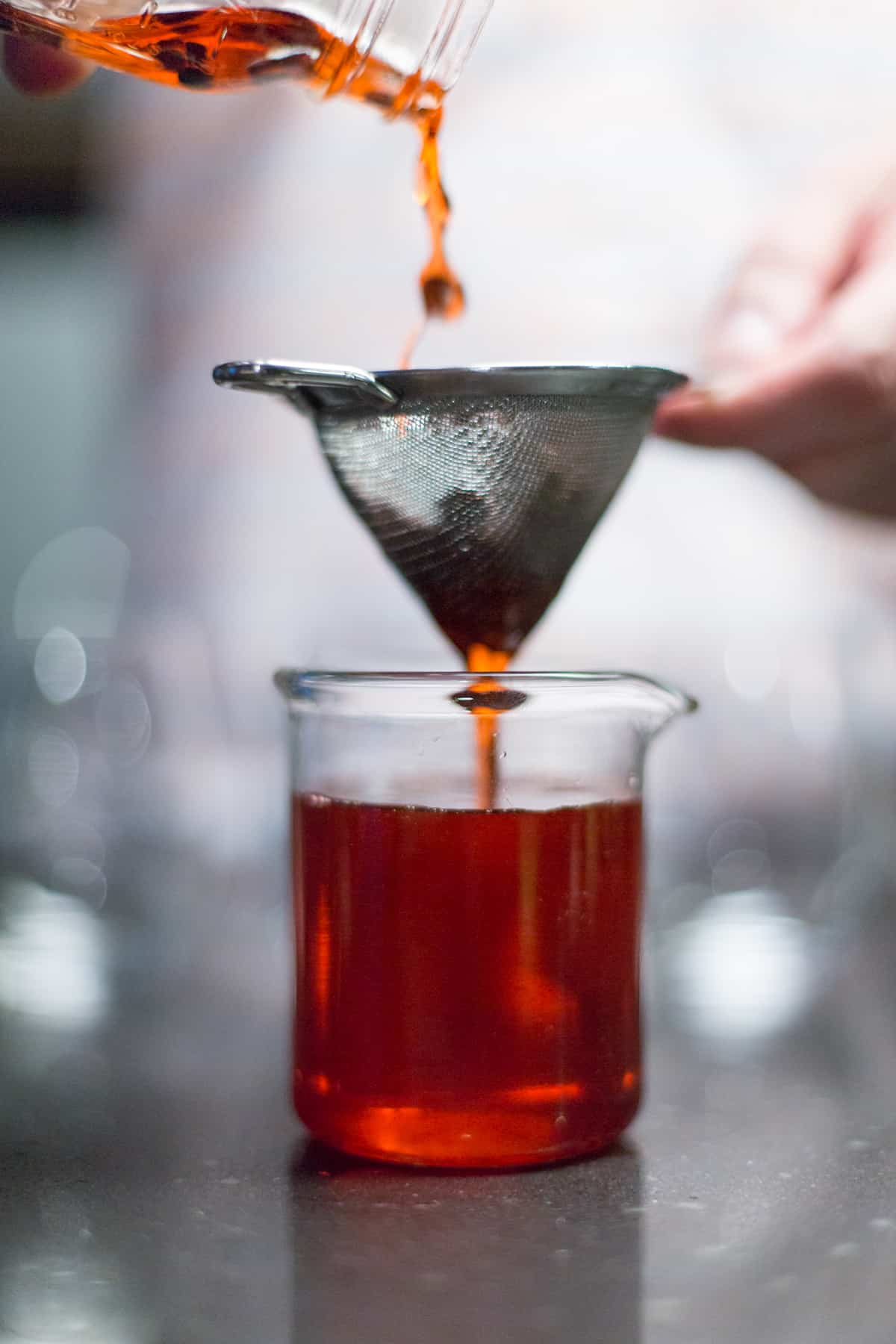 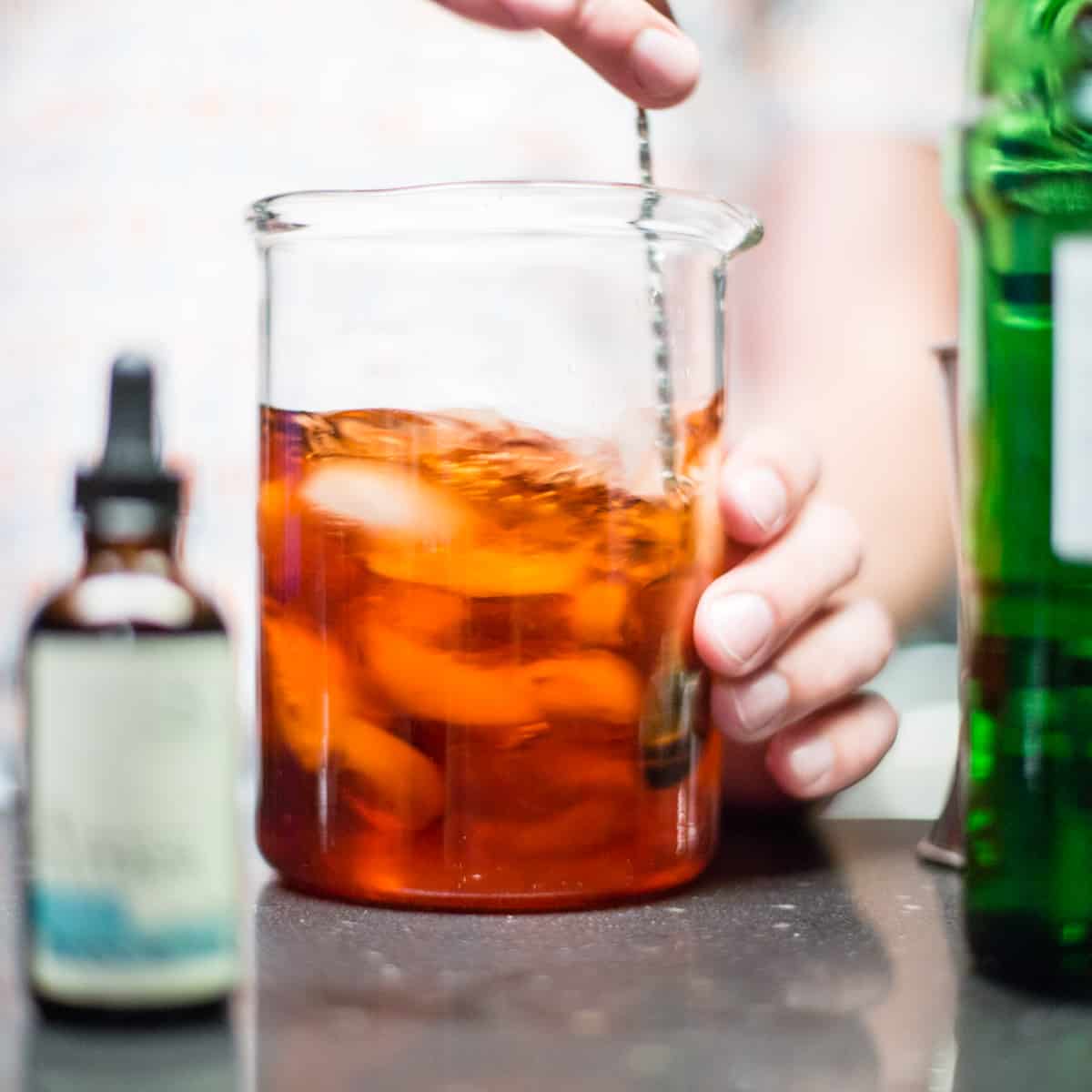 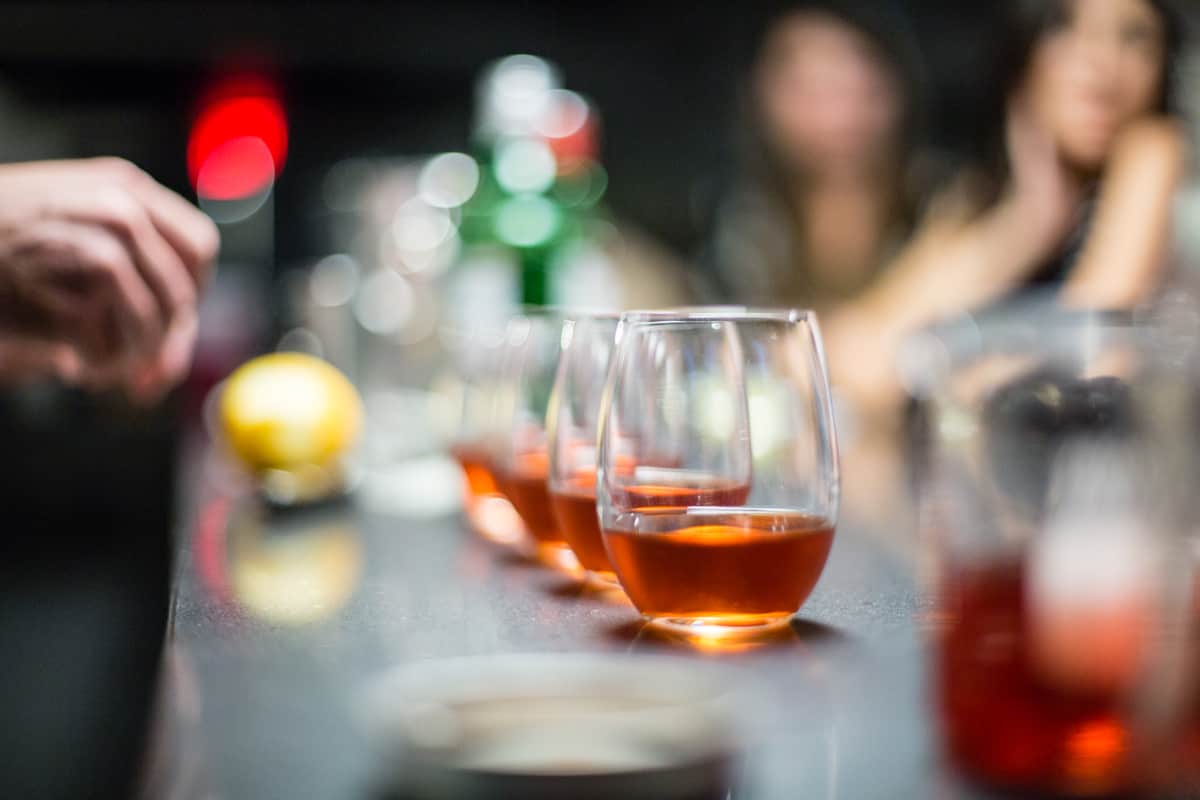 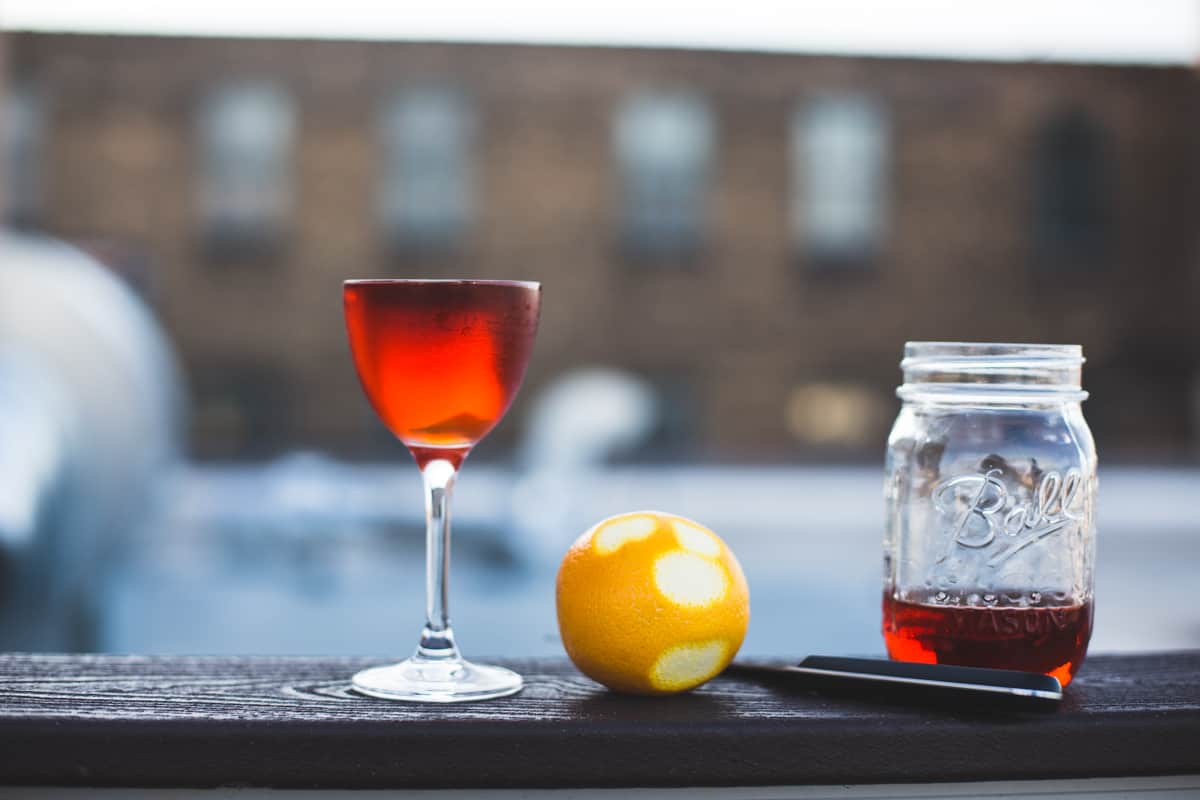 I’m so glad I faced my fears; it was the trip of a lifetime. For the flight home, I splurged on an upgrade to first class and learned that it was worth every penny, as being close to the flight attendants during take-off helps to chillax my anxiety (and, as it turns out, so do warm chocolate chip cookies, cheese platters, and limitless La Croix sparkling water). As for the humidity, let’s just say it was a good thing there was air conditioning everywhere we went. And as for the mosquitos, I managed to escape with just one (giant, welty) bite during a bloodbath in which I killed 5 mammoth mosquitos that snuck into the Airbnb I stayed in after the retreat. Shudder. 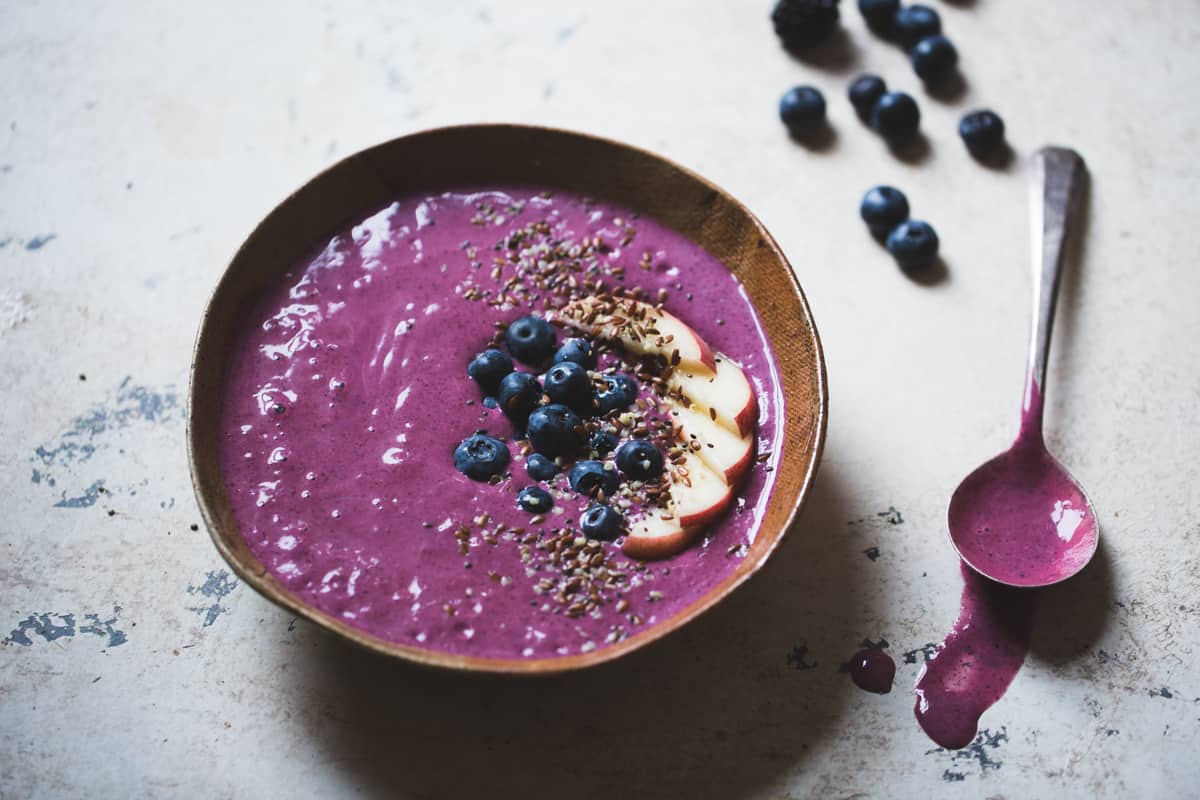 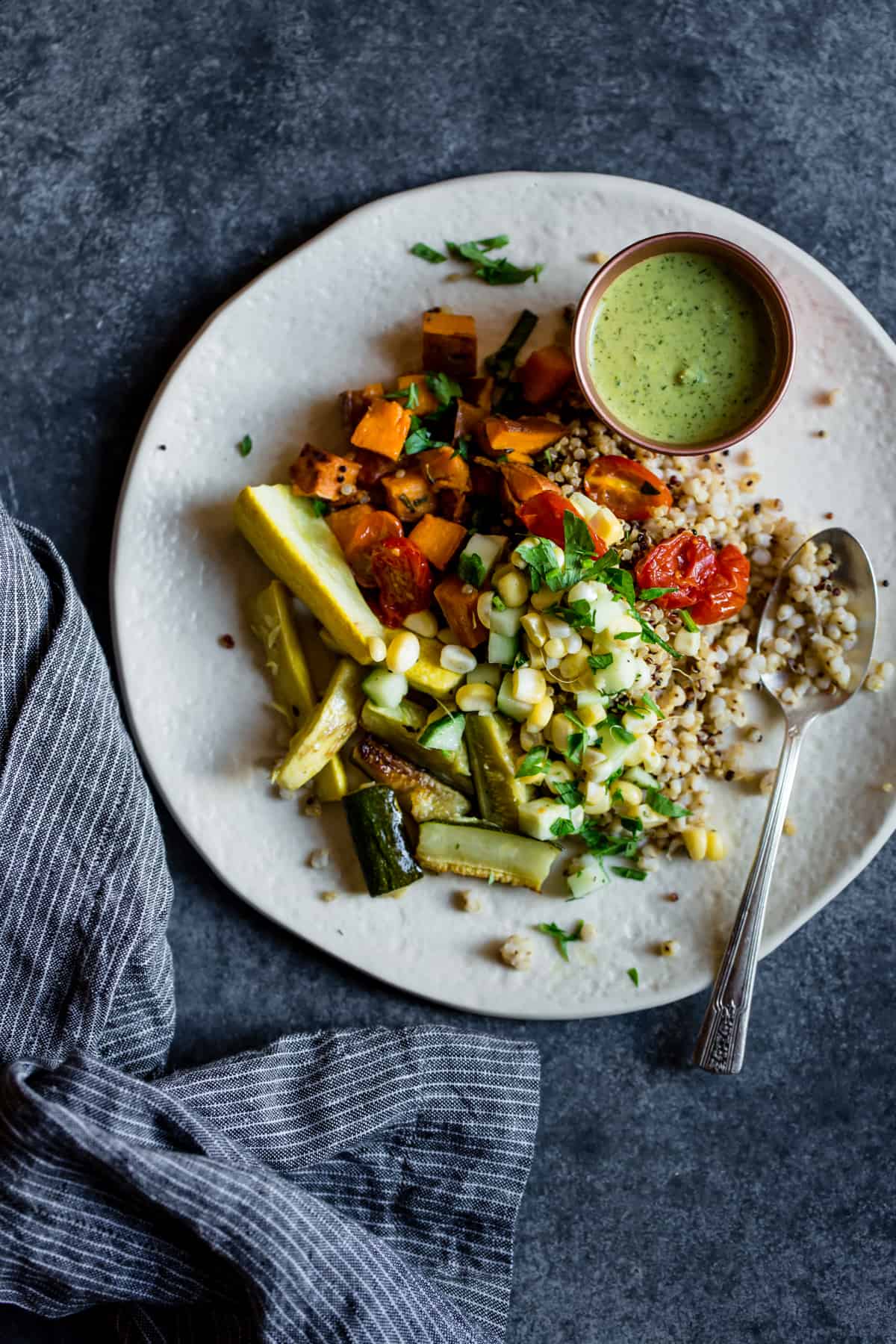 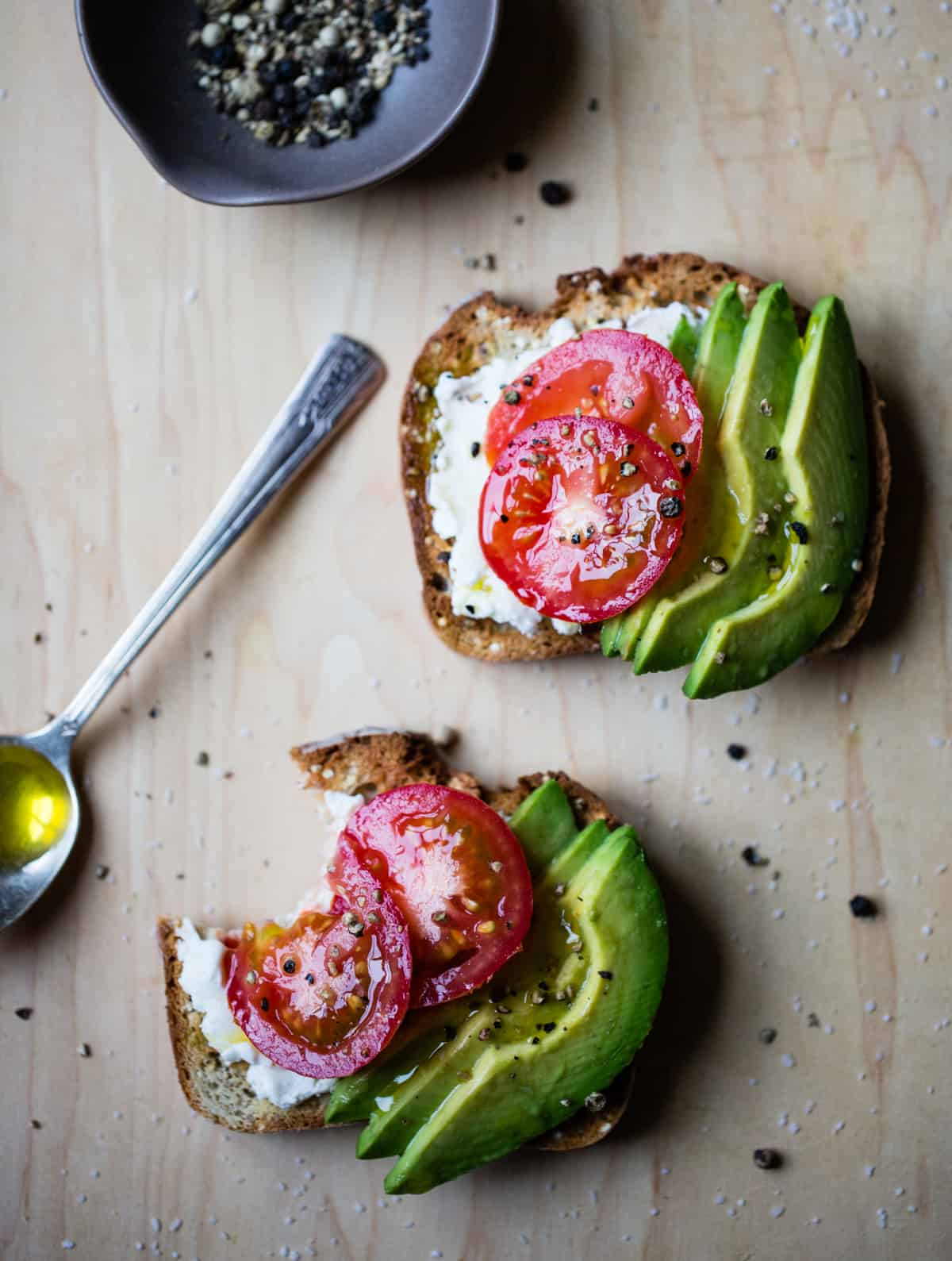 During the trip, we pretty much lived off La Croix sparkling water, which stocked the fridge day and night. I’m usually not a fan of flavored water, but one sip of their unsweetened grapefruit and lime flavors and I was hooked. I drank SO MUCH La Croix. If I was bubbling over with happiness that weekend, it may have been not only due to the stellar company and comestibles, but also because my insides were literally effervescent from all the sparkling water. 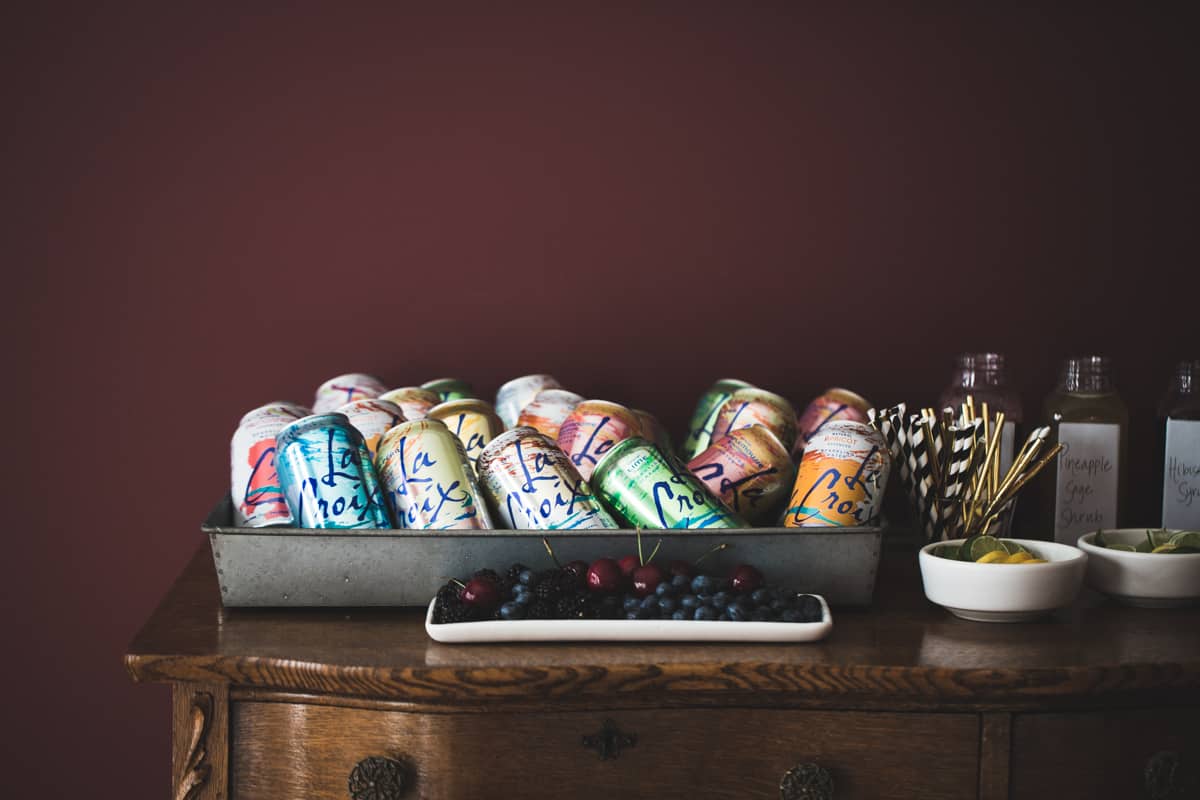 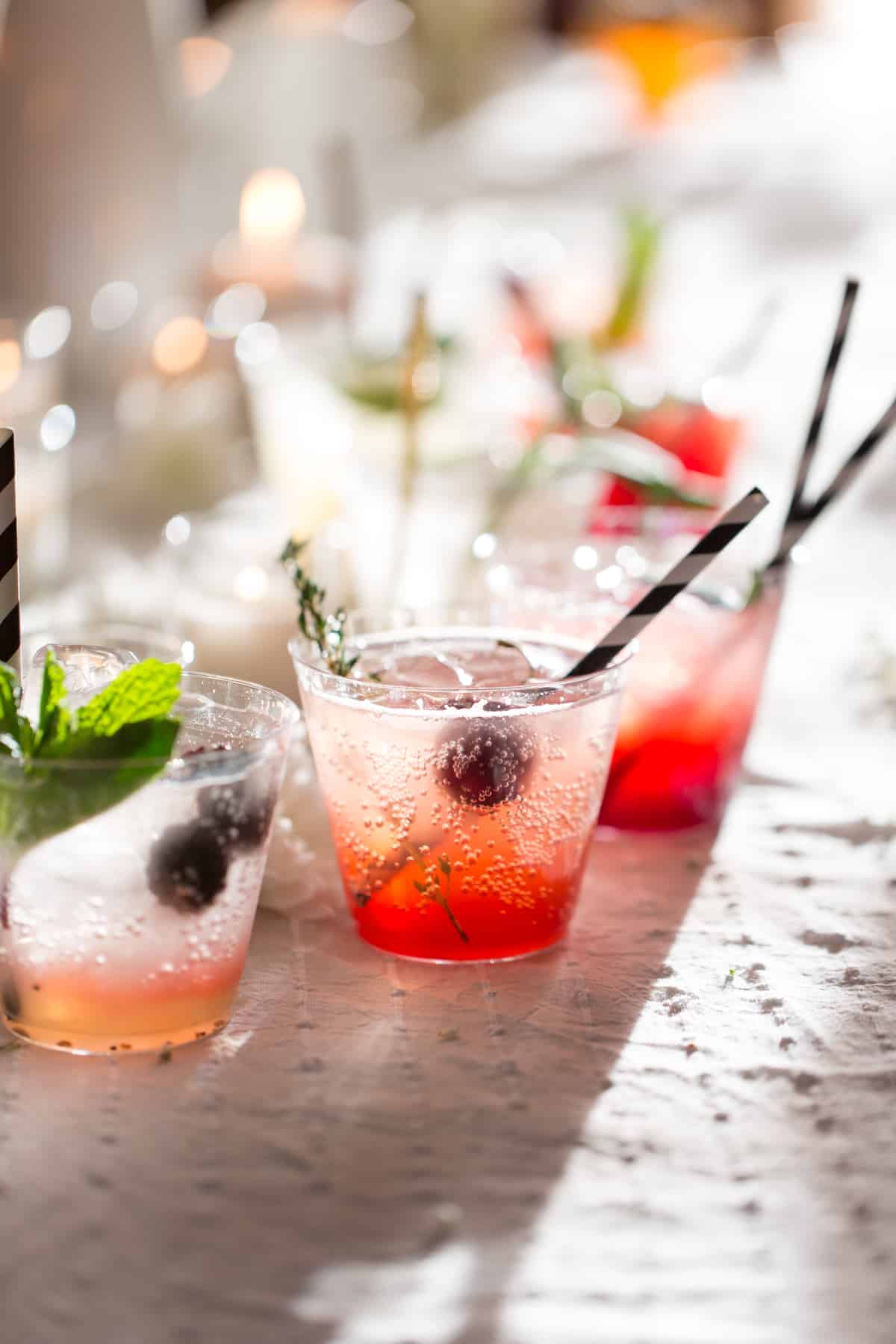 Inspired by the copious ice cream, bubbles, and tea-flavored beverages of our time in the Midwest, Sarah and I got together back in Cali to have a little ice cream float party in honor of #DrinkTheSummer. I blended ripe peaches with a concentrated rooibos infusion and vanilla bean for an easy soda that pairs beautifully with Sarah’s coconut milk-based ice cream. It’s stupid easy to make and the texture is sublime. Sarah’s float was equally stunning and flavored with blackberries, Earl Grey, and lavender. Float nirvana! 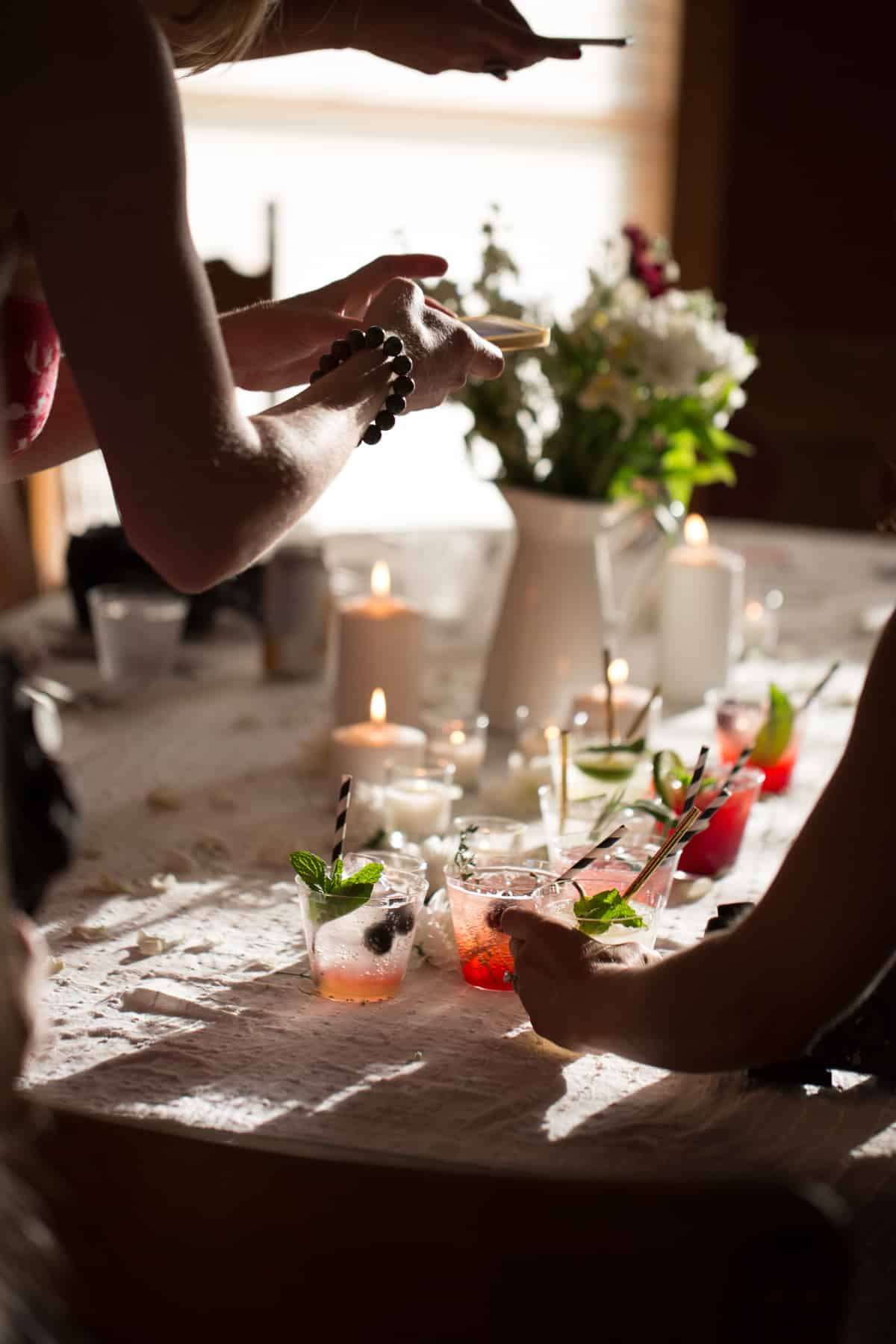 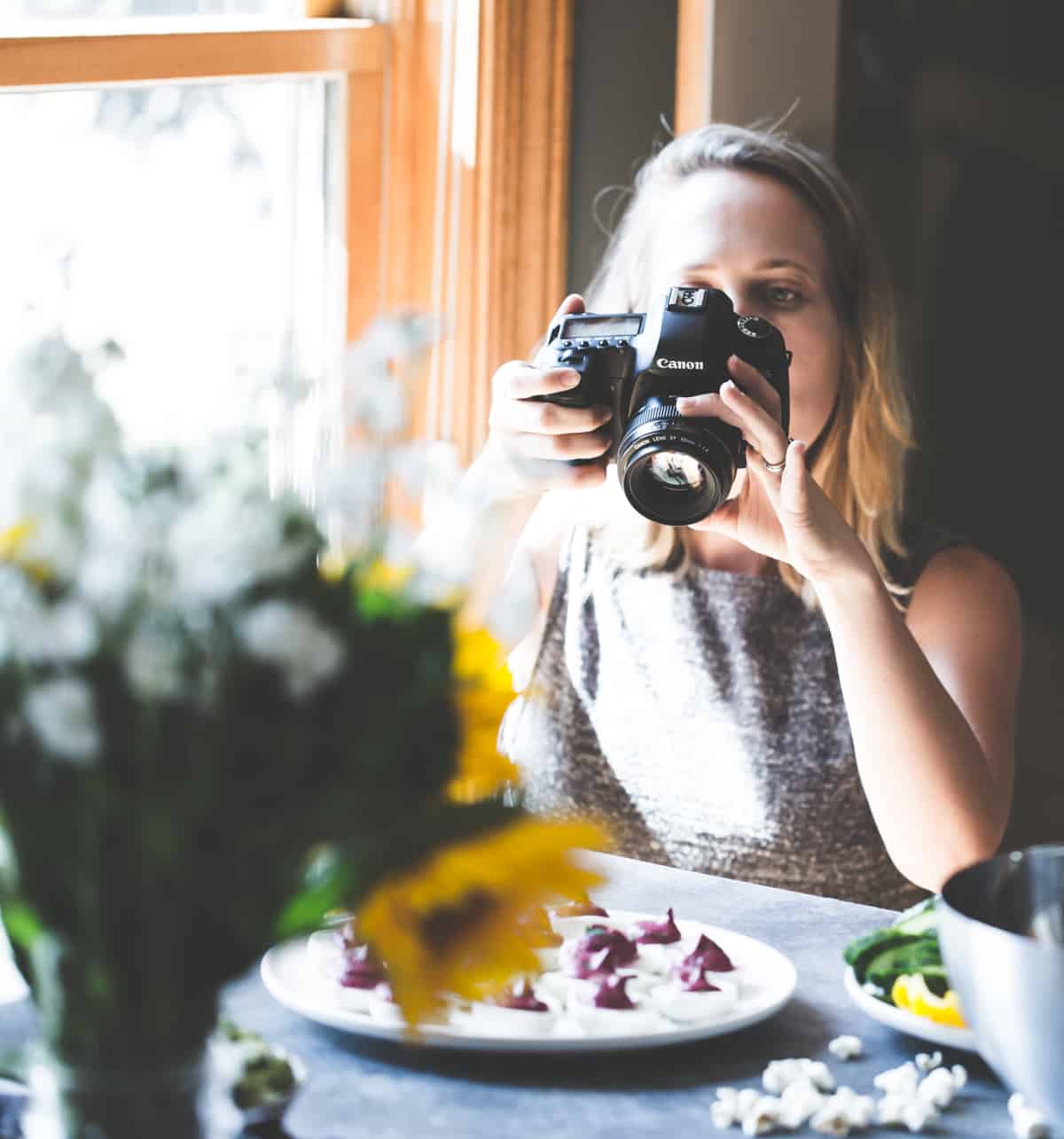 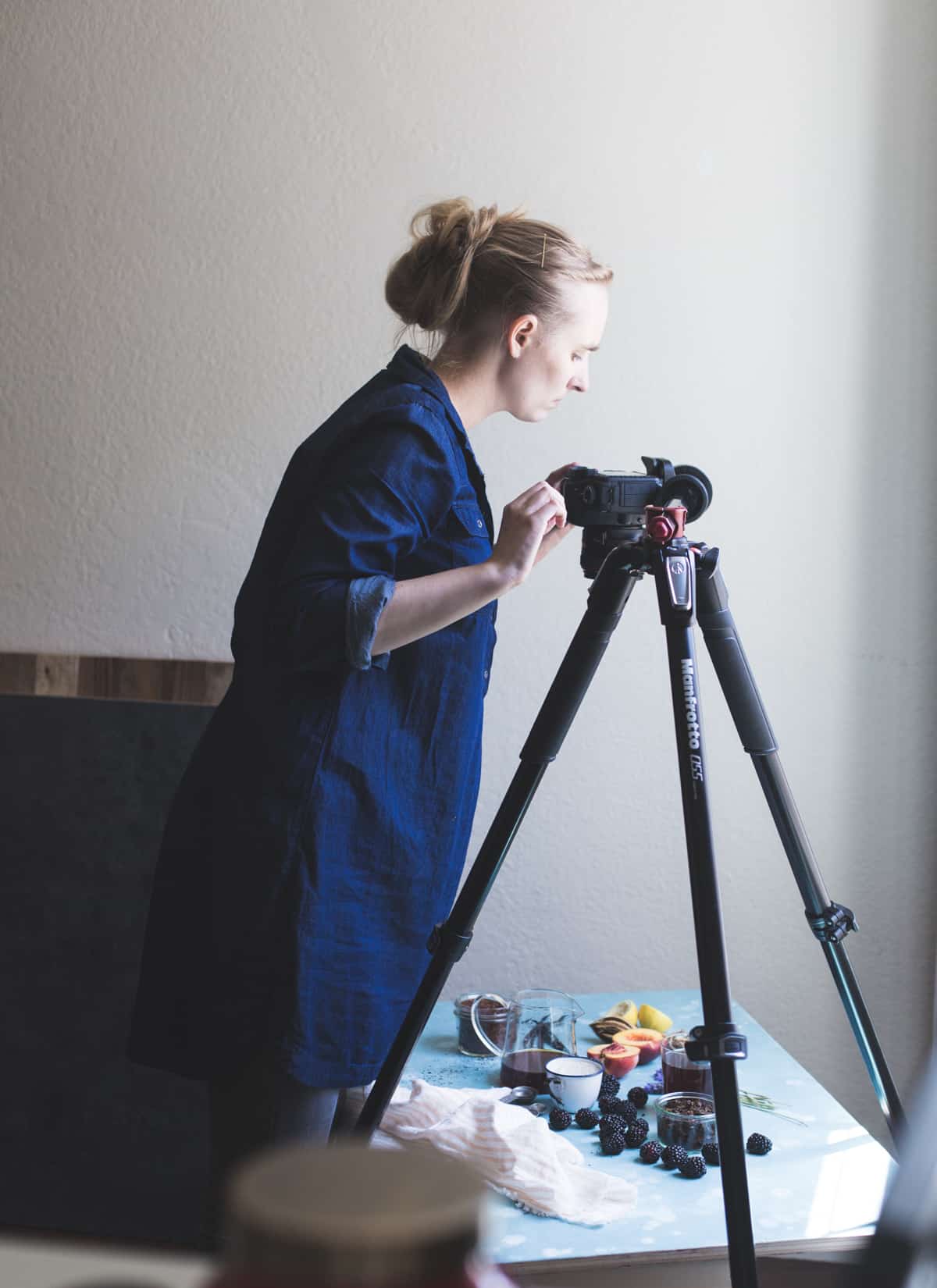 Rooibos and peach are a match made in heaven. The red South African plant tastes like earth, honey, and nectar when steeped. When blended with peach, it tastes a bit like perfectly ripe apricots flecked with vanilla. We couldn’t get over how well the flavors all paired with the tropical notes in the ice cream. For more ice cream floats, check out our video Trio of Floats. 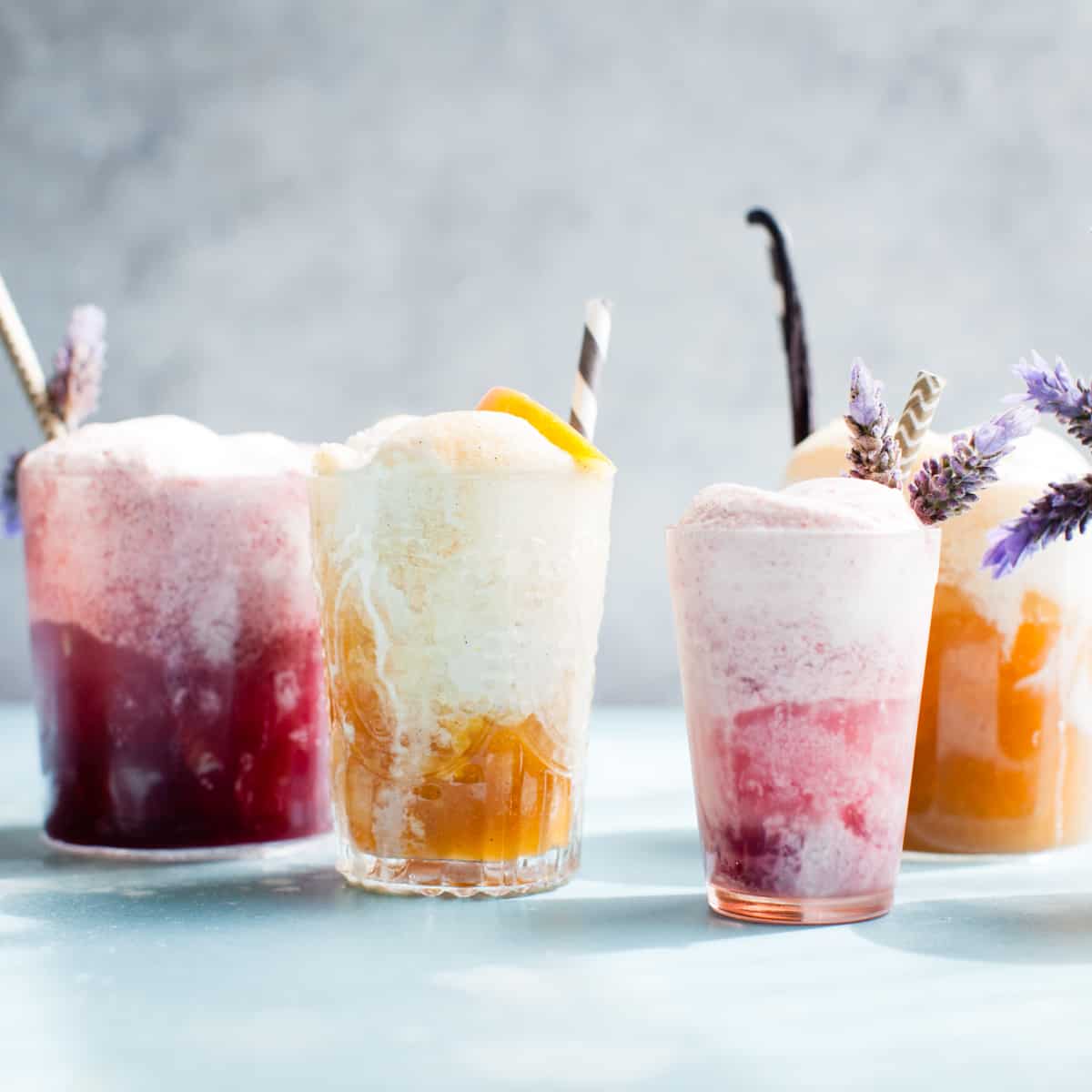 Cheers to the last drops of summer! 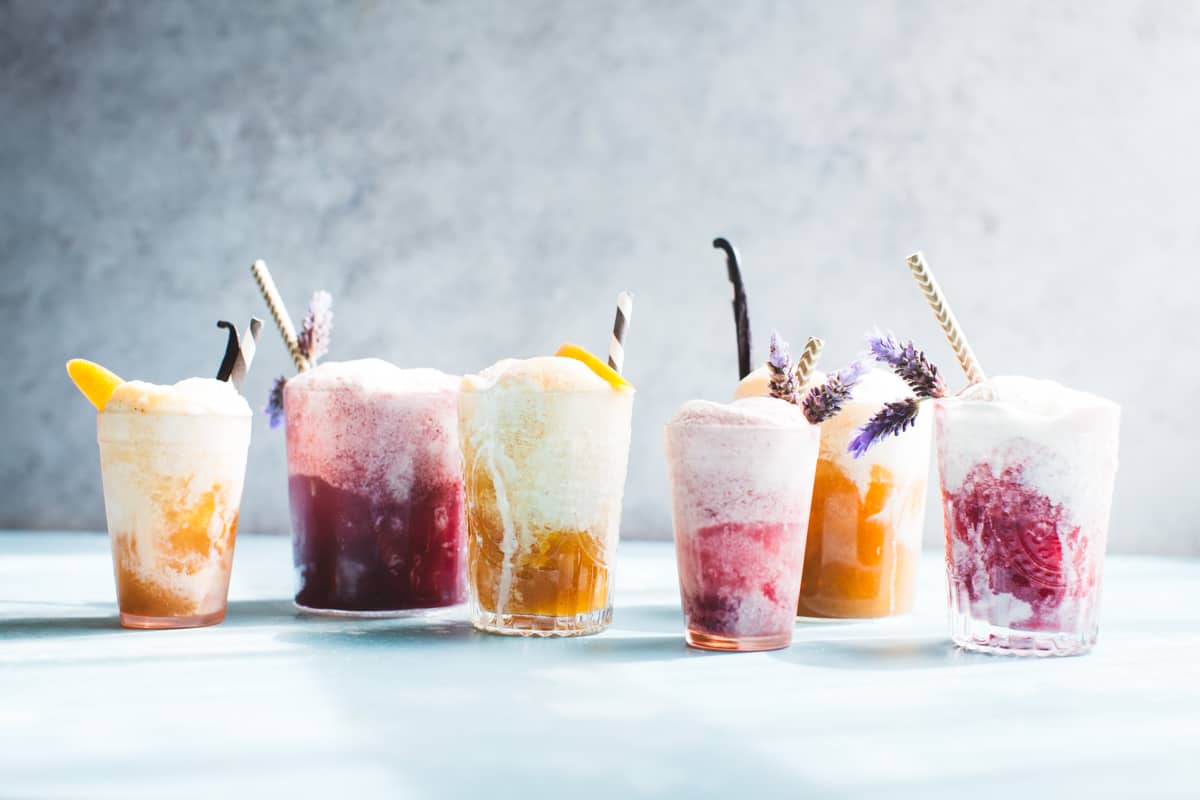 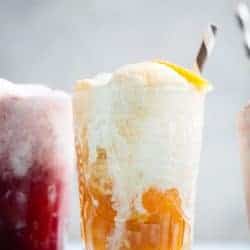 In place of the vanilla bean, feel free to use vanilla rooibos or ½ teaspoon vanilla paste or extract. Sarah's Vegan Vanilla Bean Ice Cream is on point and easy to make, but feel free to replace it with your favorite vanilla ice cream if need be. Nutritional values are based on one of four servings.

See all the lovely libations for #DrinkTheSummer 2016:

See the party from DRINKTHESUMMER 2015 here!