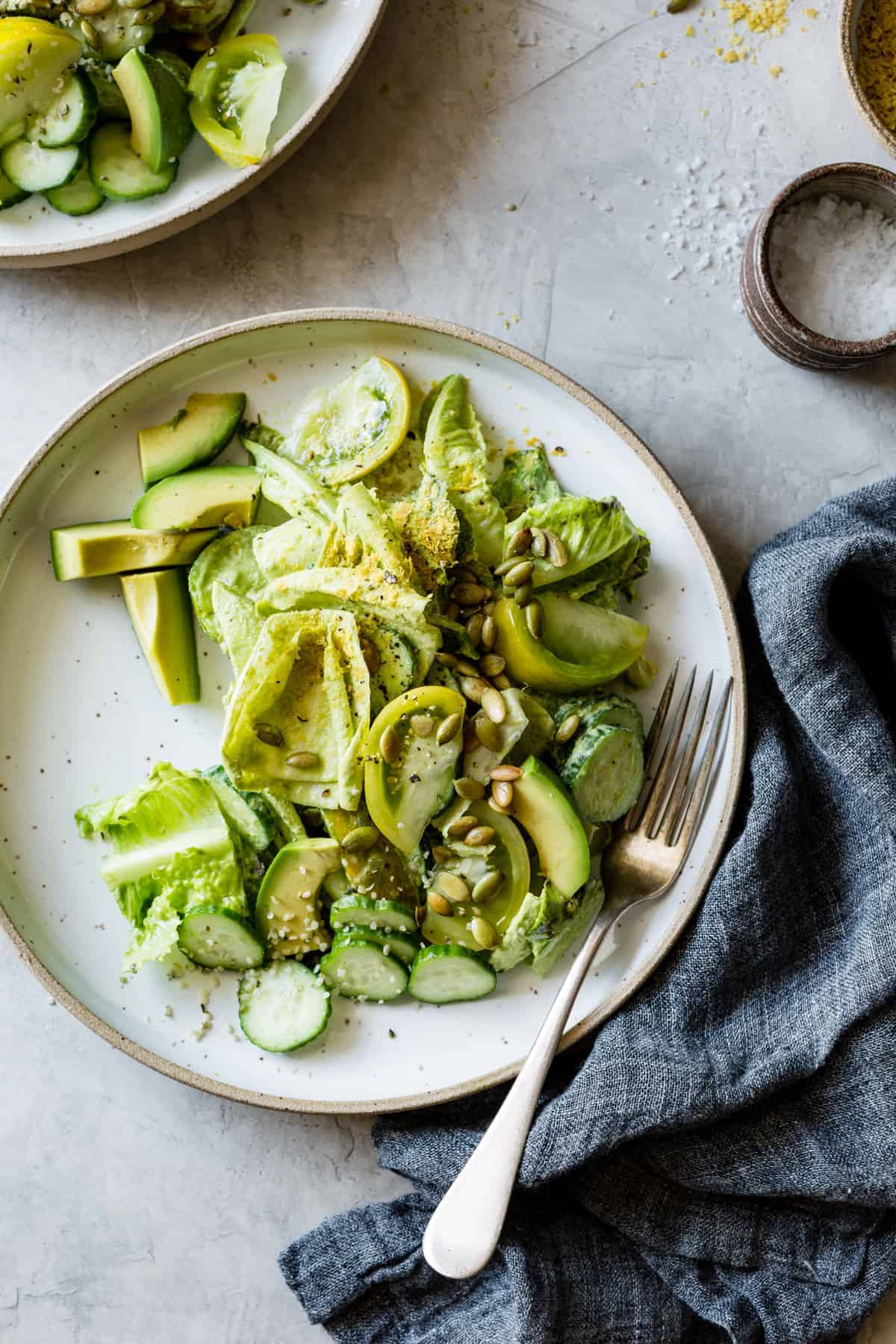 It takes a lot to get me excited about a salad. While rationally I know I'm utterly privileged to be able to eat all the fresh produce I want, day in and day out, my inner child still sees salad as an obligatory and not always entirely pleasant detour en route to dessert. As an adult I've come to crave leafy greens at every meal. But a bowl full of salad for dinner can still seem like punishment, the exception being when said salad contains copious amounts of cheese – see exhibits A, B, C, D, and E. 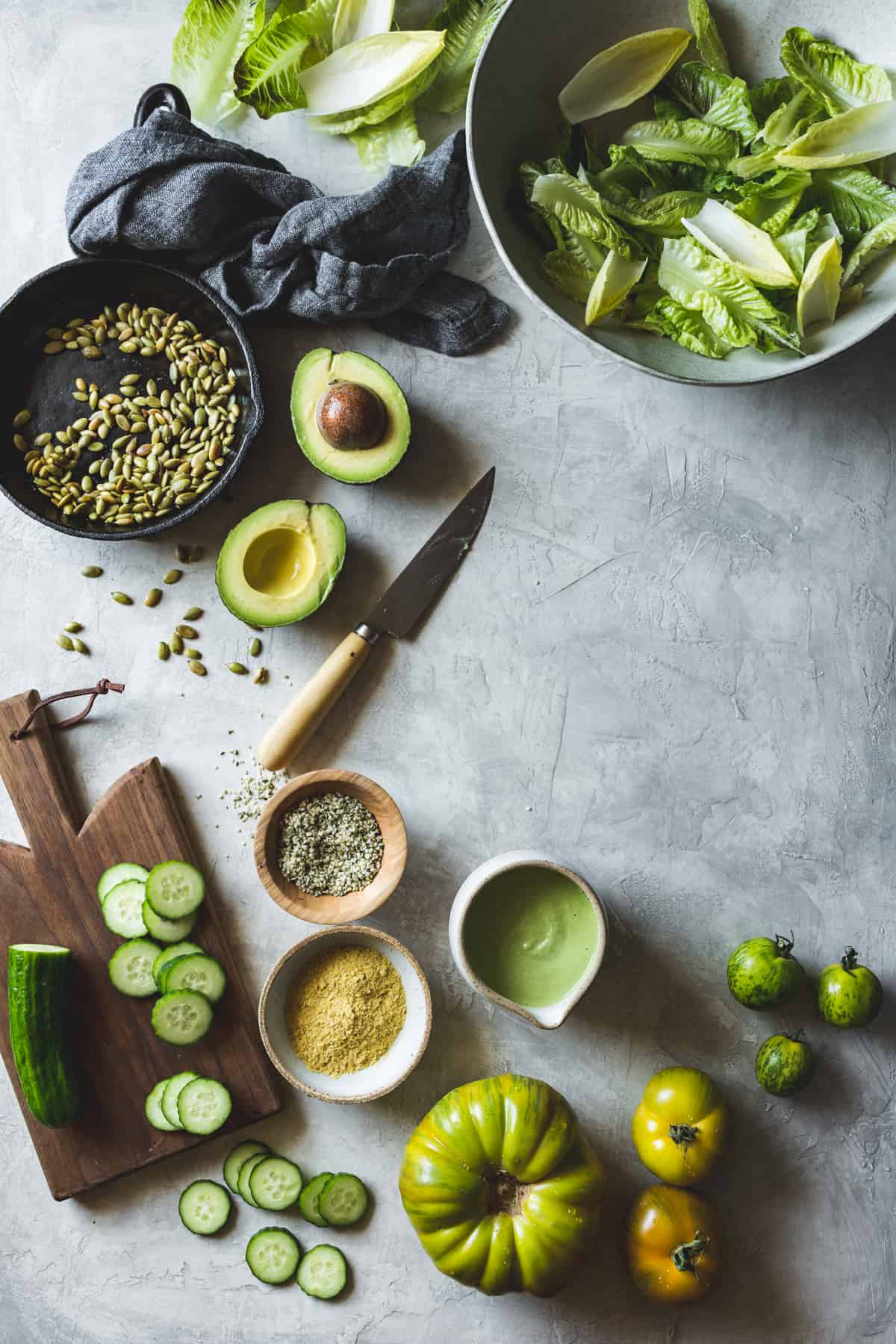 But that was before summer vegan green goddess salad entered my world (and my mouth). 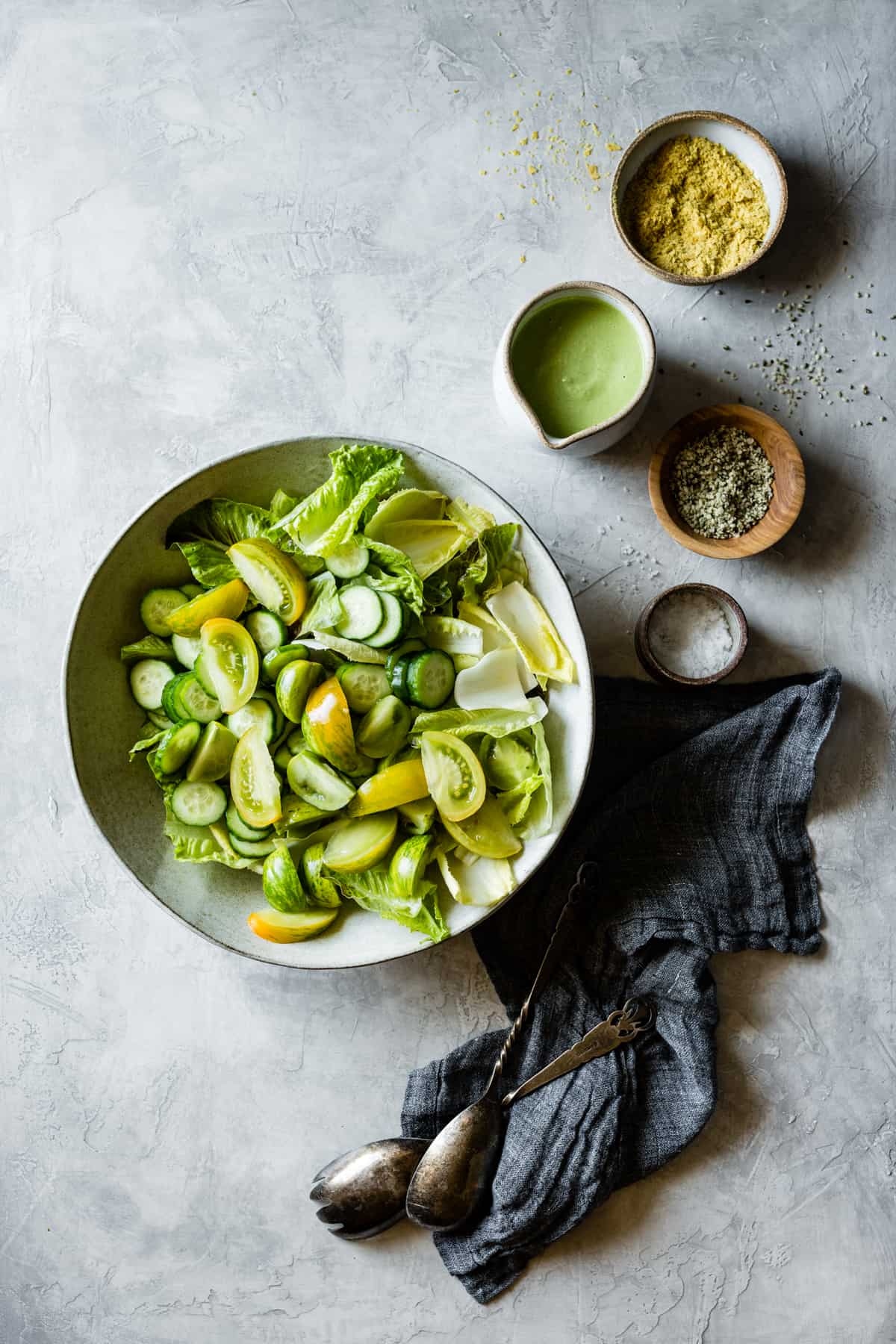 This salad took inadvertent inspiration from an outrageously delicious vegan kale caesar salad made in Sebastopol at a sweet little restaurant called Slice of Life. Sarah, Gerry, Carla and I shared an order alongside a couple of GF pizzas the evening before our food photography workshop.

Tender kale leaves were coated in a nap of tangy, creamy dressing doused with nutritional yeast, capers, avocado, toasty seeds, and deceptively delicious coconut bacon. Despite being vegan, the salad felt hearty and nourishing, with deep cheese-like flavor from the yeast and whatever gave the dressing body. It took all of my willpower not to bogart the entire salad for myself. 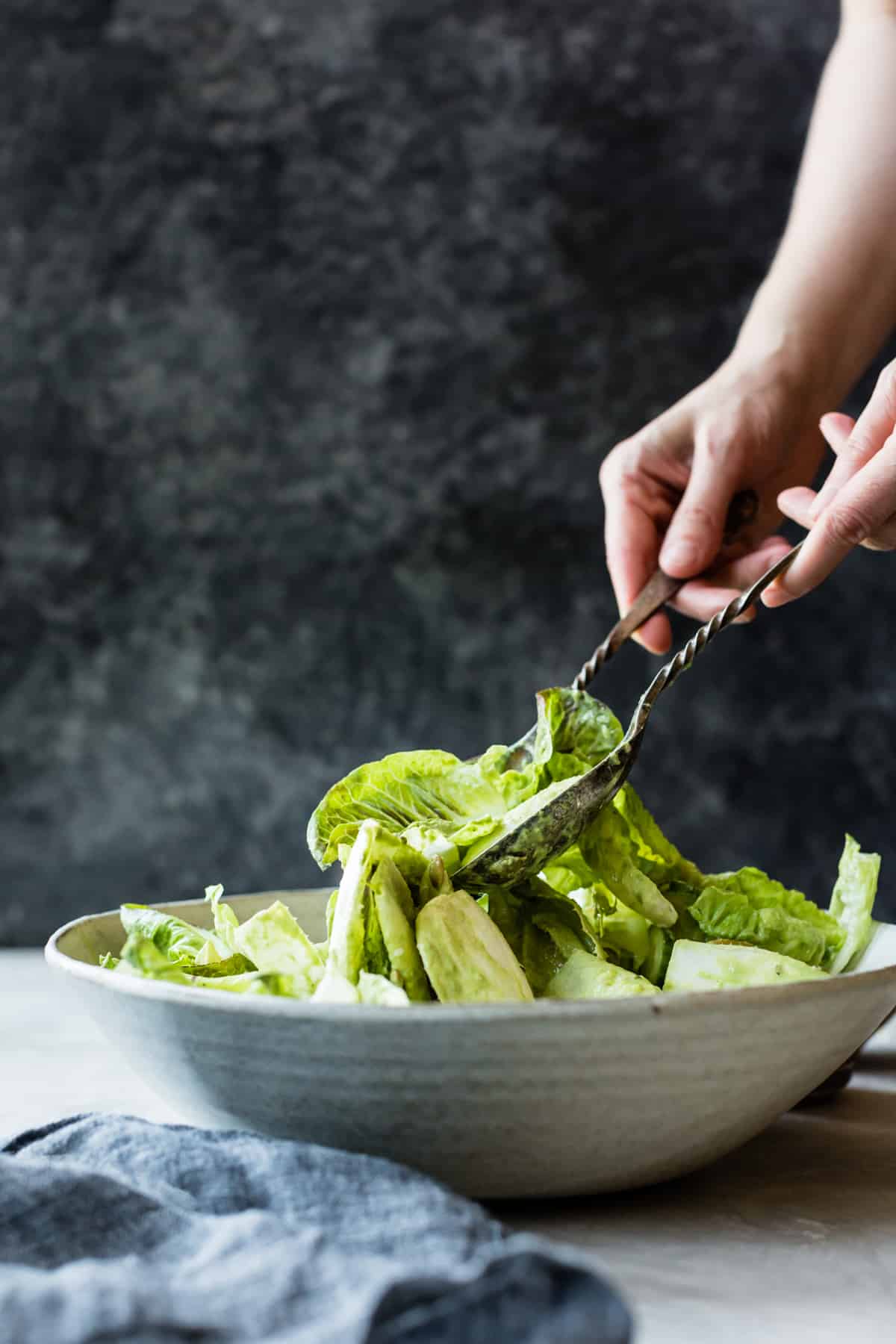 Back home in SF post-workshop, I thought about that salad a lot. I considered trying to replicate it, but feared that the platonic salad ideal in my head would never match up to reality. Instead, armed with a bag of insanely good Arise Bakery gluten-free baguettes (which, pssst, you can order), I made panzanella topped with green goddess buttermilk dressing and loads of fresh mozzarella. Then I got the idea to make the panzanella vegan, swapping marinated white beans for the cheese and making this cashew-based version of the dressing. Both were pretty good. 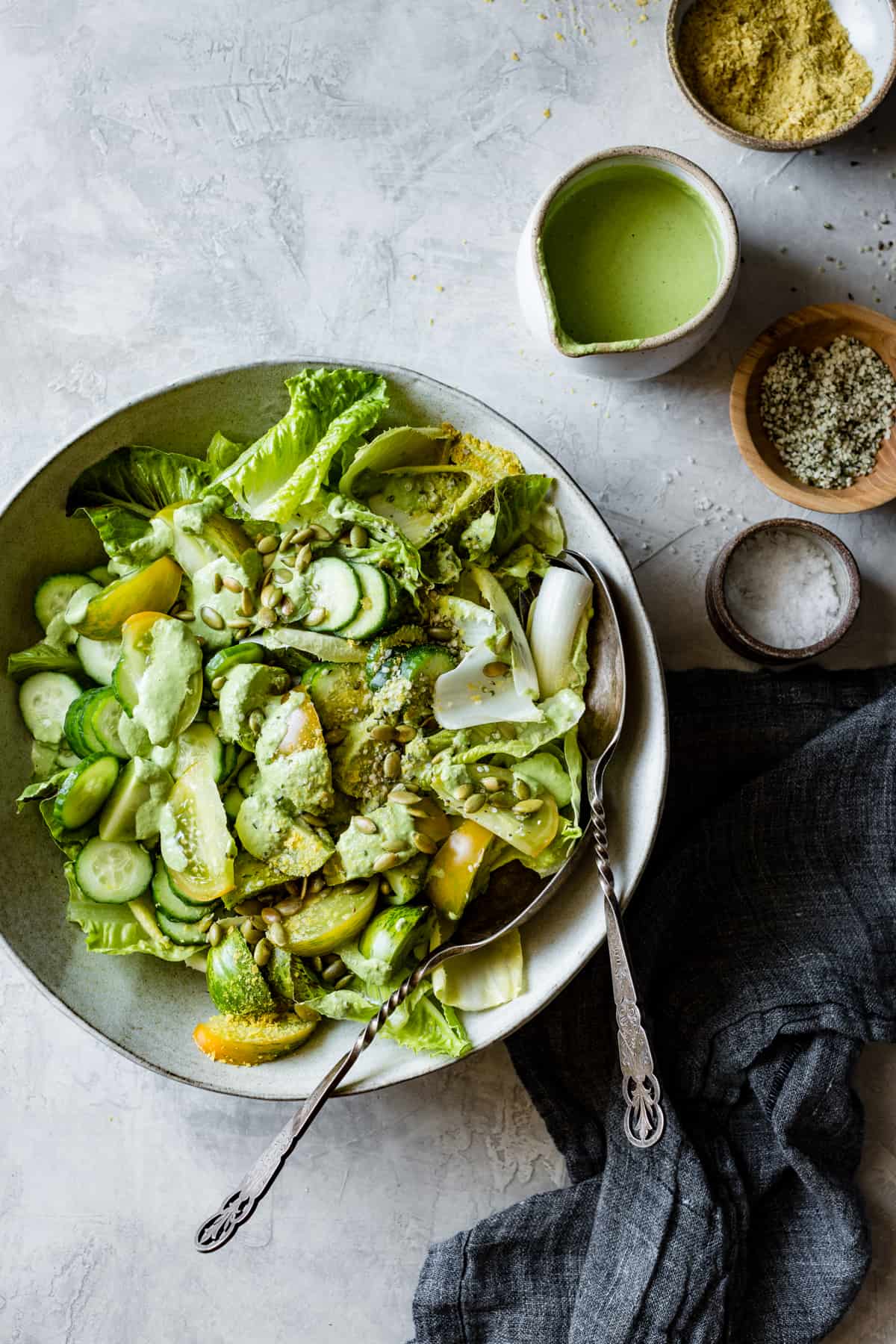 But then one evening, needing a quick side salad to go with dinner, I tossed some basic salad ingredients – lettuces, cucumber, tomatoes, avocado – with the dregs of the vegan green goddess dressing. On a whim, I sprinkled a little nutritional yeast on top, and bam – I was transported back to our pre-workshop dinner. This salad hit all the same notes. 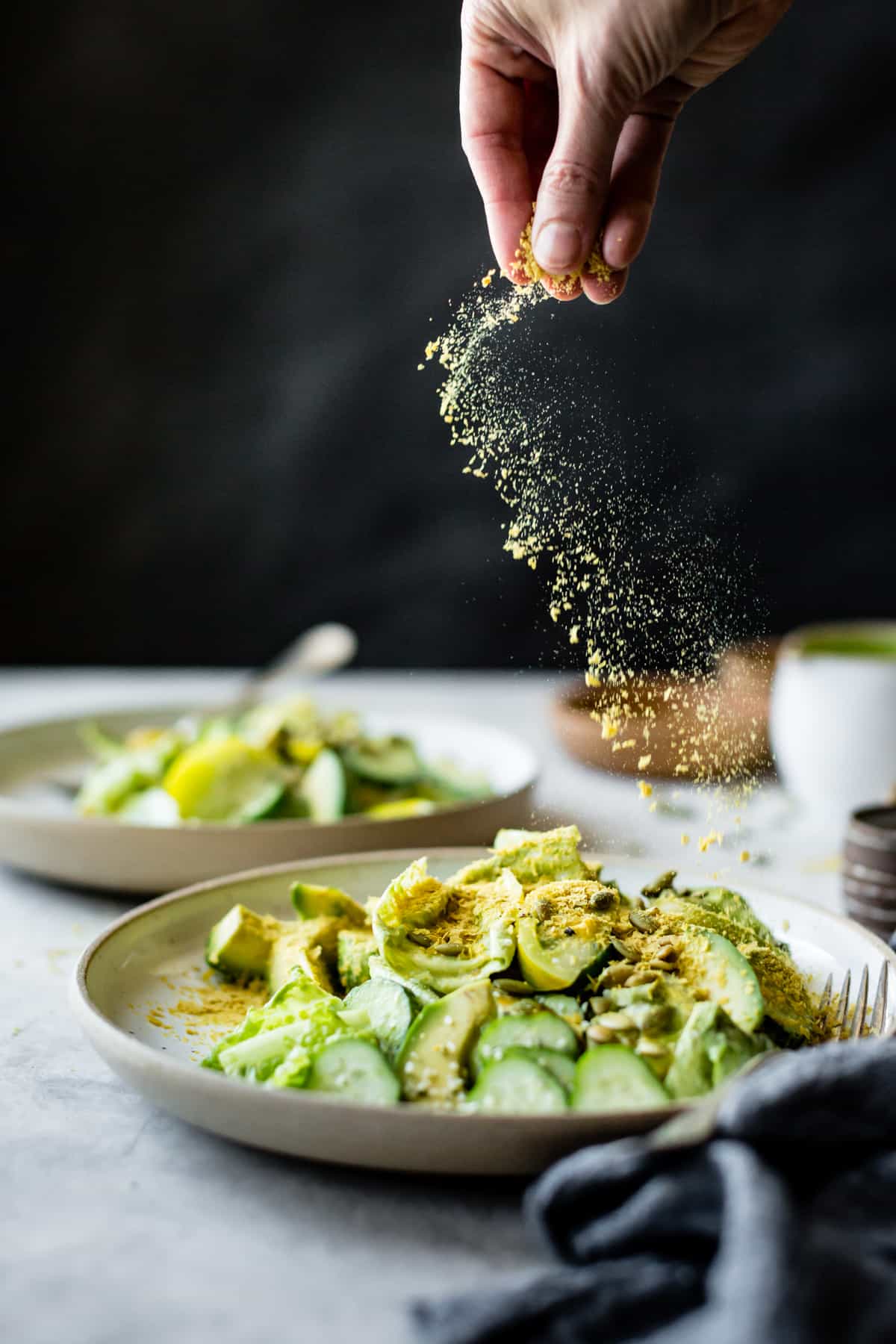 Despite containing neither crispy croutons nor cheese, this salad trumped all the others. Creamy cashew green goddess dressing loaded with fresh herbs and piquant capers, garlic, and lemon coats crunchy lettuce leaves. Little gems or romaine hearts and endives stand up beautifully to the thick dressing. Crisp cucumber and juicy heirloom tomatoes fill the salad up with summer love, while avocado and toasted pepitas and hempseeds add extra healthy fats and make the salad into a filling meal, no cheese needed. Nutritional yeast adds an addictive flavor layer akin to parmesan on a classic caesar. And if you make a batch of Kate's coconut bacon to throw on top, it makes this even more satisfying. 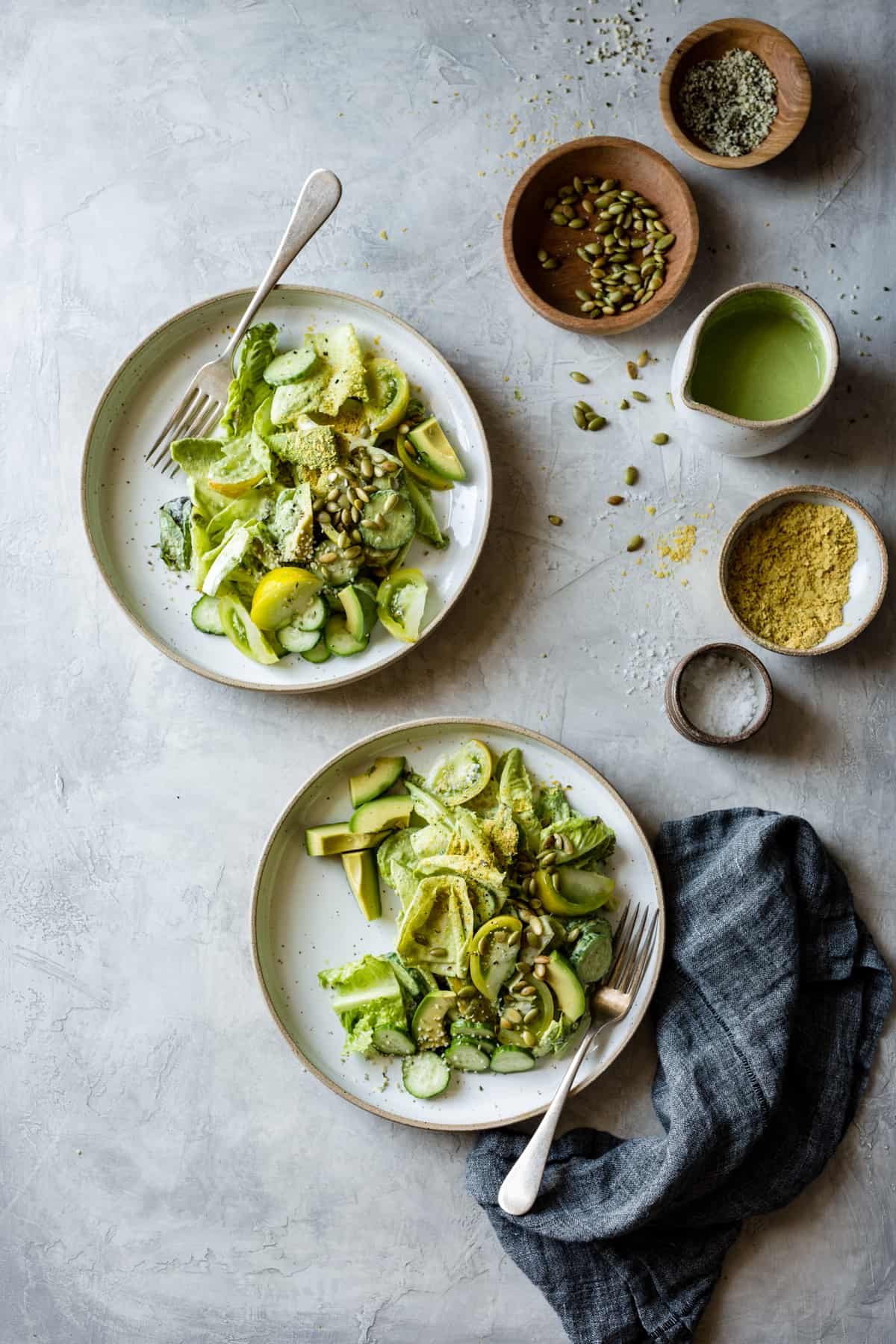 So cheers to the bounty of summer and our good fortune in having access to such amazing produce...even when it's salad. 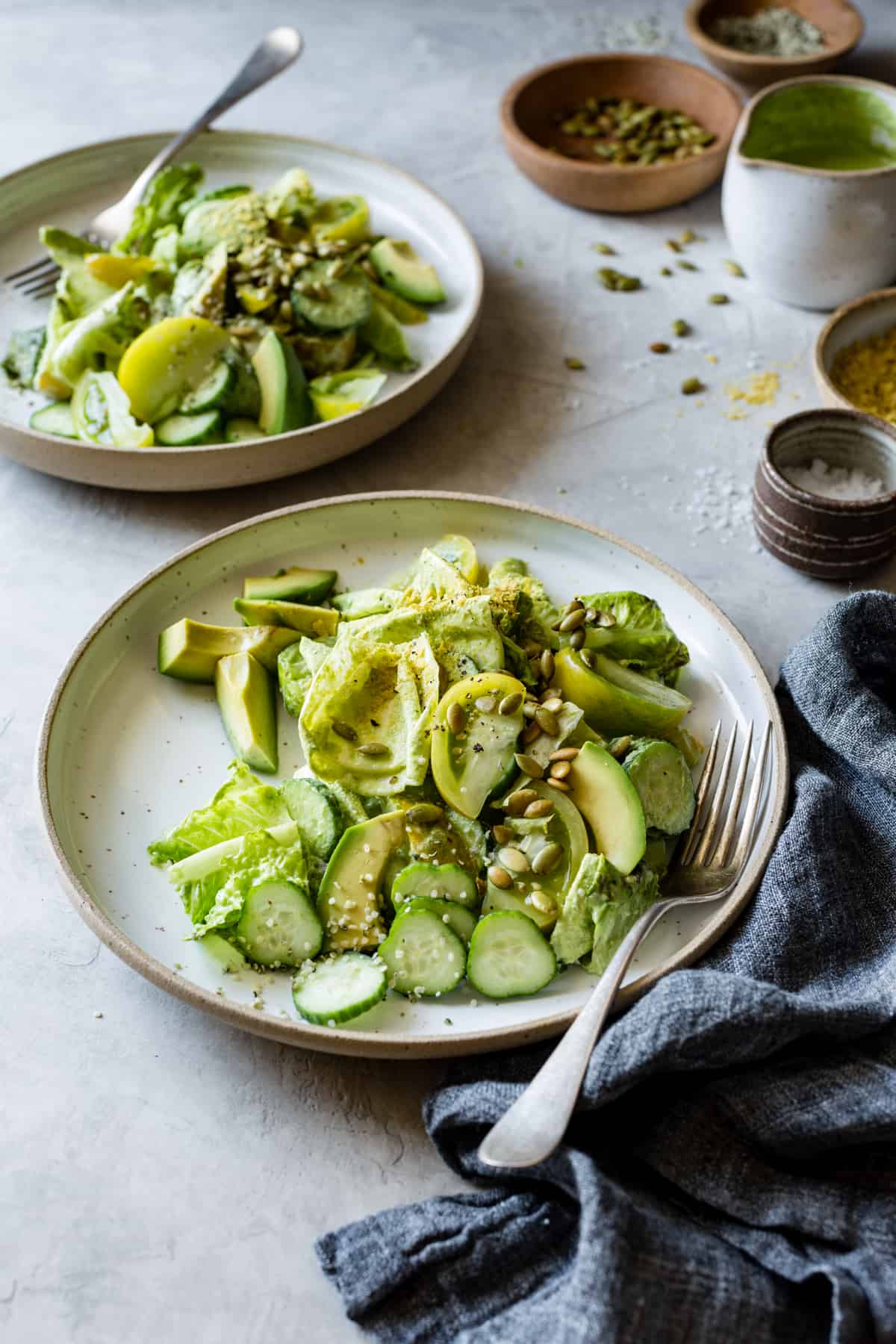 *Thanks for reading! For more Bojon Gourmet in your life, follow along on Instagram, Facebook, or Pinterest, purchase my gluten-free cookbook Alternative Baker, or subscribe to receive new posts via email. And if you make this green goddess salad recipe, I’d love to see! Tag your Instagram snaps @The_Bojon_Gourmet and  #bojongourmet.* 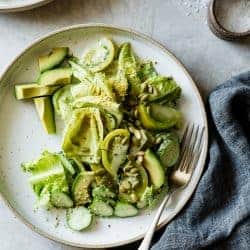 If you want to gild the lily, add a handful of coconut bacon to the top. Nutritional values are based on one of two large servings. 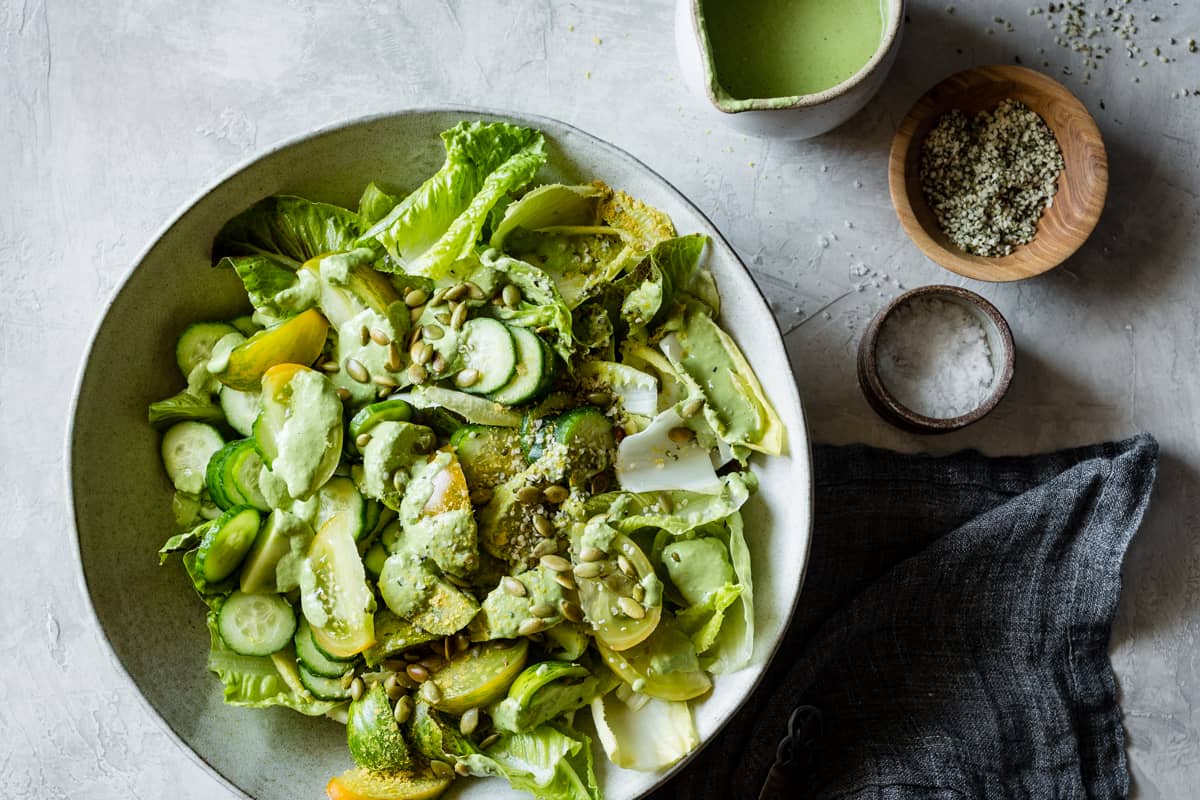