Cheese addiction is a thing thanks to the amino acids found in casein, the dairy protein that concentrates during the cheesemaking process. These chains of amino acids get partially broken down during digestion, and wind up resembling morphine compounds that can attach to the opiate receptors in one's brain, creating feelings of euphoria followed by a desire for more. This explains my passion for cheese, and it also explains why I enjoyed morphine so much when a nurse stuck some in my IV during a particularly nasty bout of food poisoning years ago – it must have reminded my body of eating a nice wedge of aged chèvre. This also explains why Jay and I can't keep our hands off this flatbread.

Or maybe it's just really tasty...

Sarah and I have been styling shoots for the New York Times recently – an amazing opportunity that fell into our be-aproned laps thanks to our friend photographer Craig Lee. I've been enjoying making recipes each week by the likes of Melissa Clark, Mark Bittman and Sam Sifton, and I especially appreciate the culinary knowledge and inspiration I've been picking up along the way.

A recent favorite was this savory pumpkin tart, which gets stuffed with pressed winter squash cubes, whole garlic cloves, and caramelized onions, baked, then filled with heavy cream (!) – an intriguing recipe, and completely delicious to boot. The only thing I wished it had was...dairy-crack! As I was making it, I began to envision a cheesy, gluten-free version made with my flaky pie dough, which would be perfect for today's virtual pumpkin party hosted by Sara at Cake Over Steak.

In the end, I went for time- and calorie-saving pizza dough instead and whipped up this easy flatbread made from my gluten-free pizza crust recipe, which is loaded with whole grain flours and free from any gums. The dough takes a few minutes to stir together, a bit of rising time, and then it's spread into a baking sheet and doused with olive oil. After a blind bake to crisp it up, it's topped with roasted pumpkin, red onion, and loads of gruyere, baked until bubbly, then scattered with fried sage leaves and garlicky sage oil.

Cut it into wedges and bite into hot, crispy, cheesy, dairy-crack. The tender squash add a sweet earthiness to the snack, onion and garlic give it a satisfying savoriness, and the fried sage leaves taste musky and herbaceous.

Serve squares as an appetizer with glasses of crisp white wine, and you won't know which addictive substance is making everyone so happy. 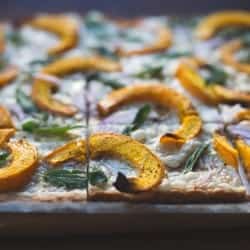 With inspiration from Foodie Crush. Nutritional values are based on one of eight servings.

Fall is officially here and with it, all the apple