Savory bread pudding meets classic dressing. This Thanksgiving-ready gluten-free stuffing recipe is rich with the flavors of leeks and shallots, toasted bread, herbs, and celery, all offset by tangy chèvre. Thanks to Vermont Creamery for sponsoring this post. 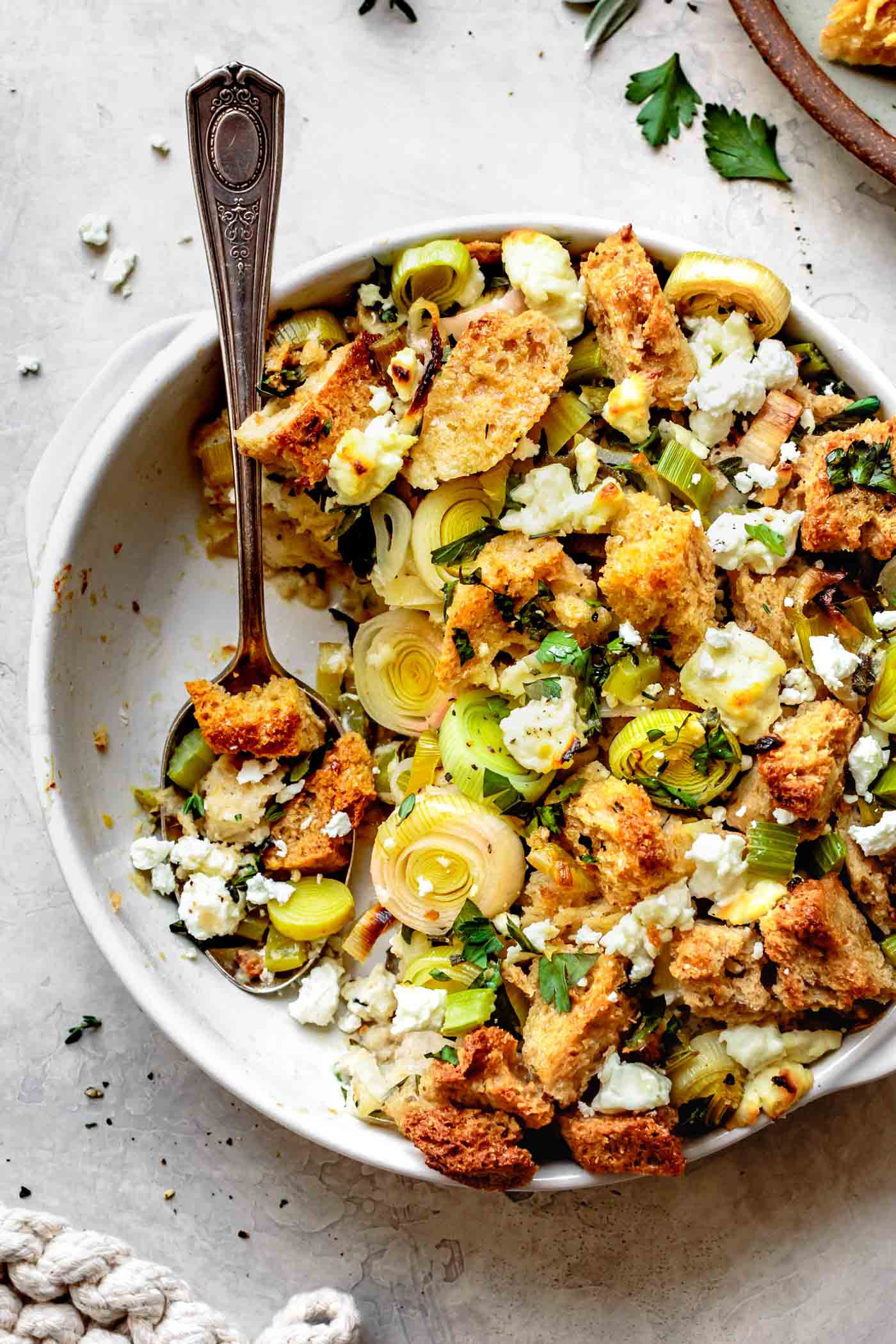 For me, Thanksgiving is all about the side dishes. I was never an avid meat-eater and these days I'm mostly vegetarian. So having killer veggie dishes that even satisfy omnivores is a must at any dinner I host. And Friendsgiving and Thanksgiving are the times when dishes like this healthy gluten-free stuffing truly get to shine.

Stuffing is Jay's favorite Thanksgiving tradition (mashed potatoes are mine) so I took it upon myself to come up with the ultimate gluten-free stuffing for our Thanksgiving dinner this year. Stuffing is essentially savory bread pudding, but the liquid that binds the bread is stock rather than dairy. Egg is sometimes added to hold things together.

This easy stuffing recipe gets richness from Vermont Creamery cultured butter and fresh goat cheese, loads of flavor from aromatics and herbs deglazed with white wine, and meltingly tender leeks and celery. I tested this recipe four times this past month. It's hearty enough to work as a main dish on its own, but it also makes a classic Thanksgiving side dish. 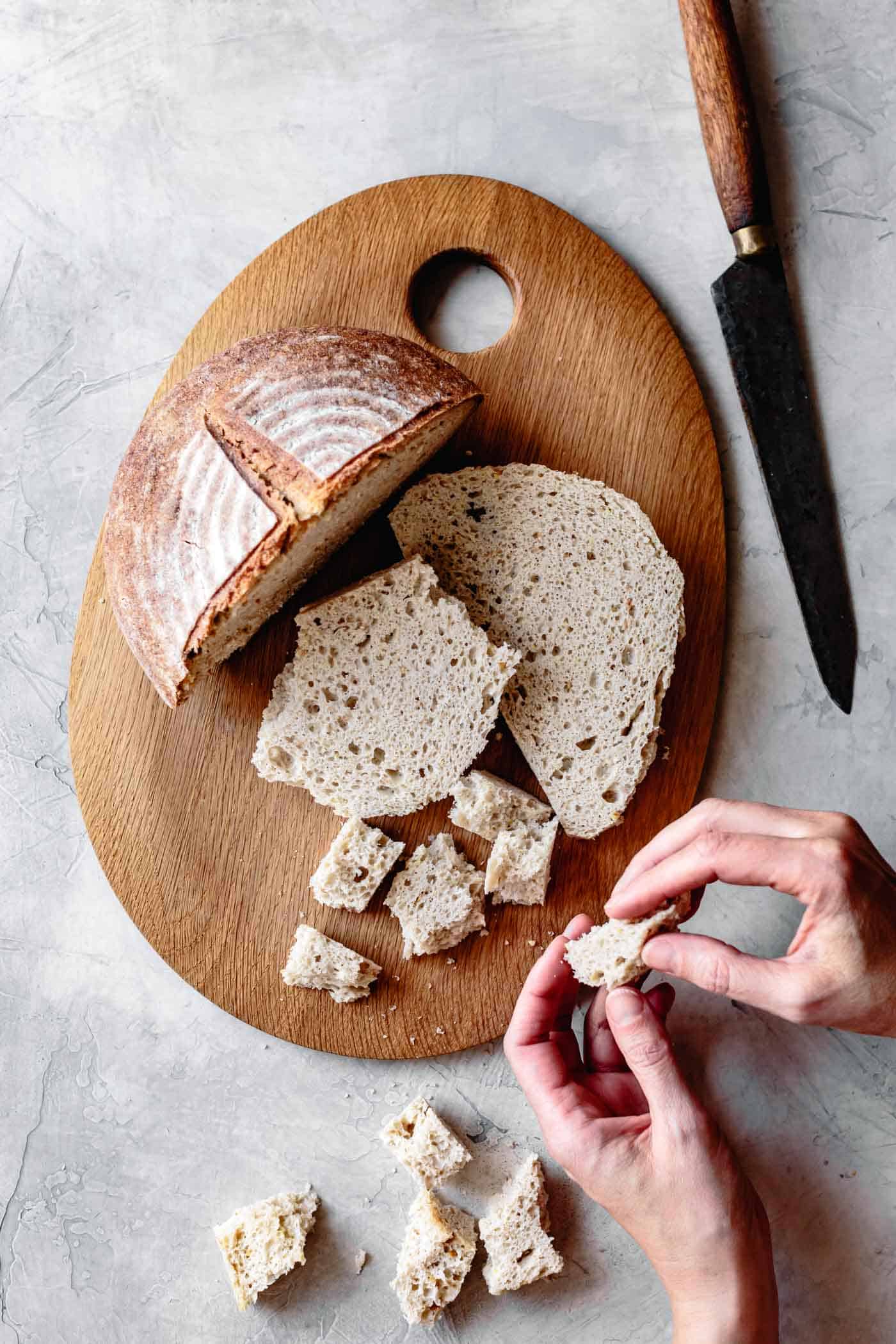 I recently did a Thanksgiving photo shoot for a client that included making stuffing from a mix. Having never made stuffing from a box before, I didn't know what was involved. I had planned to saute some onion and celery, stir it into the stuffing mix, put it in the oven, and bake it. But the day of the shoot came and I read the instructions: "Add boiling water and let sit 5 minutes." That was it!

While I did appreciate the ease of this stuffing mix for the shoot at hand, homemade stuffing is incredibly easy to make and so much more satisfying. It's a great use for day old bread, and can easily become gluten-free, vegetarian, and if you like, vegan. 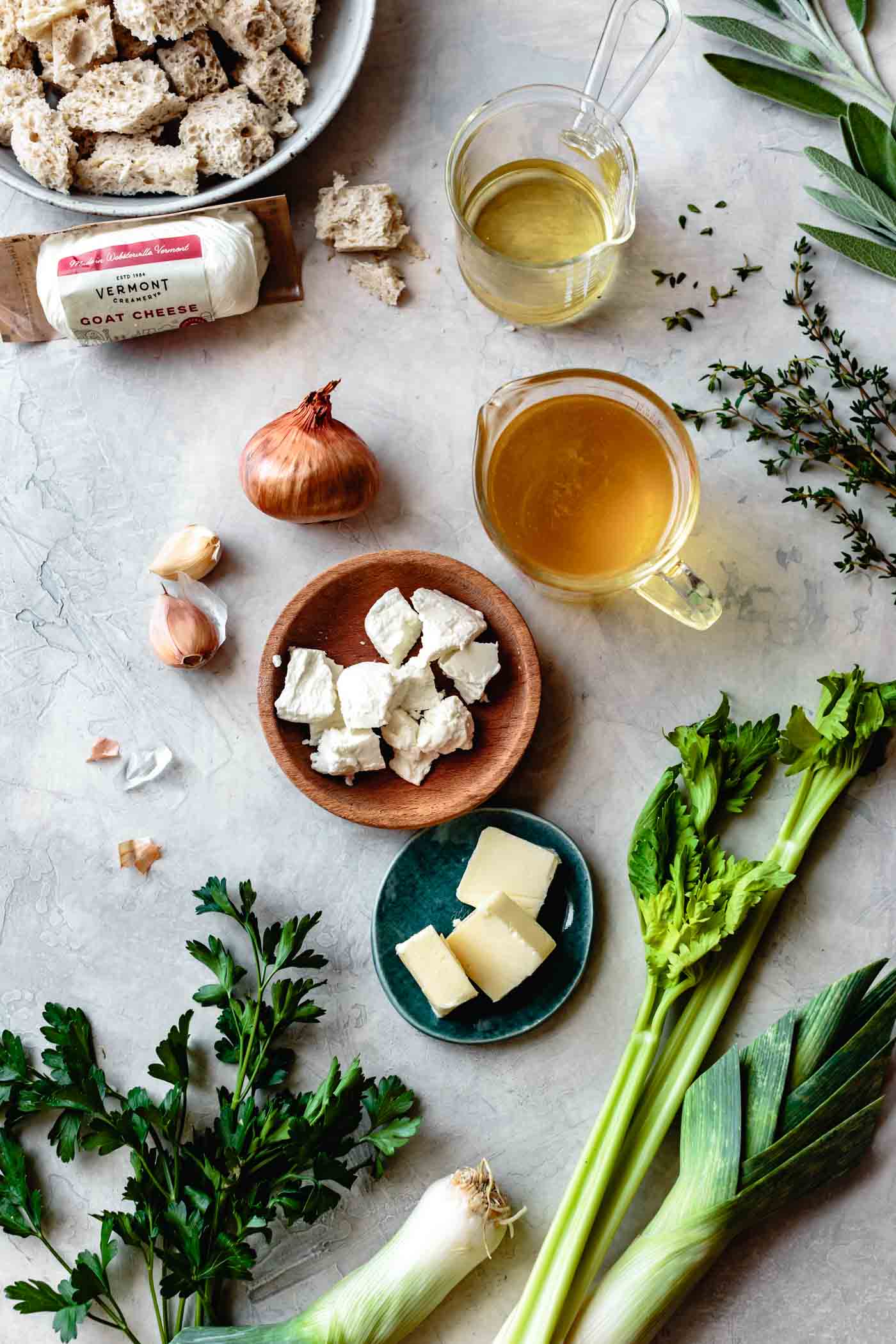 Winning Ingredients for the Best Stuffing Ever

Here's what you need to make my most delicious, moist, and savory GF stuffing recipe: 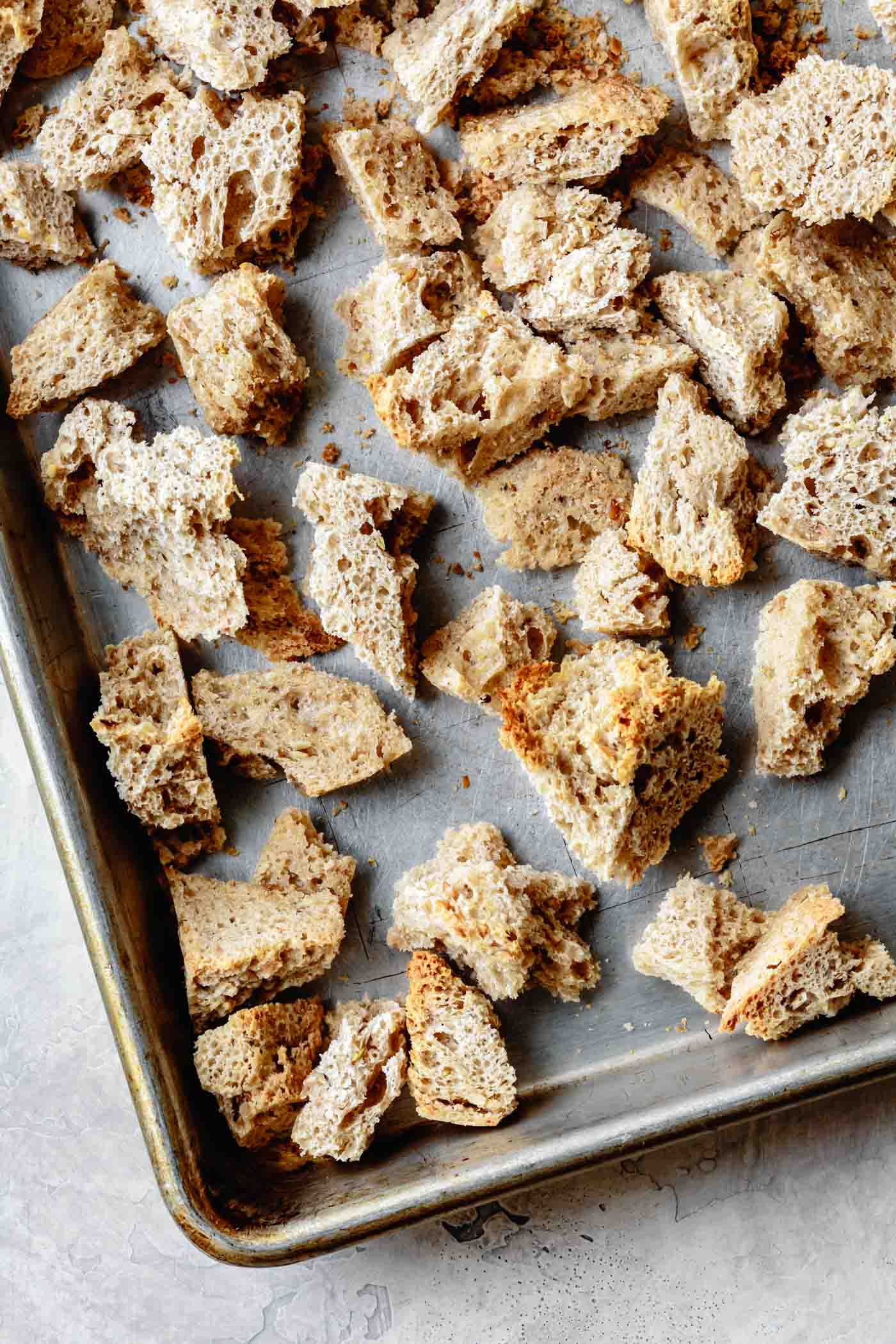 Whatever bread you start with, cut off any hard crusts if using a rustic loaf. Tearing the bread into pieces rather than cutting cubes forms craggy edges that crisp up beautifully on top. Dry the bread out in the oven and let it get a little bit toasty before tossing it with the other stuffing ingredients. 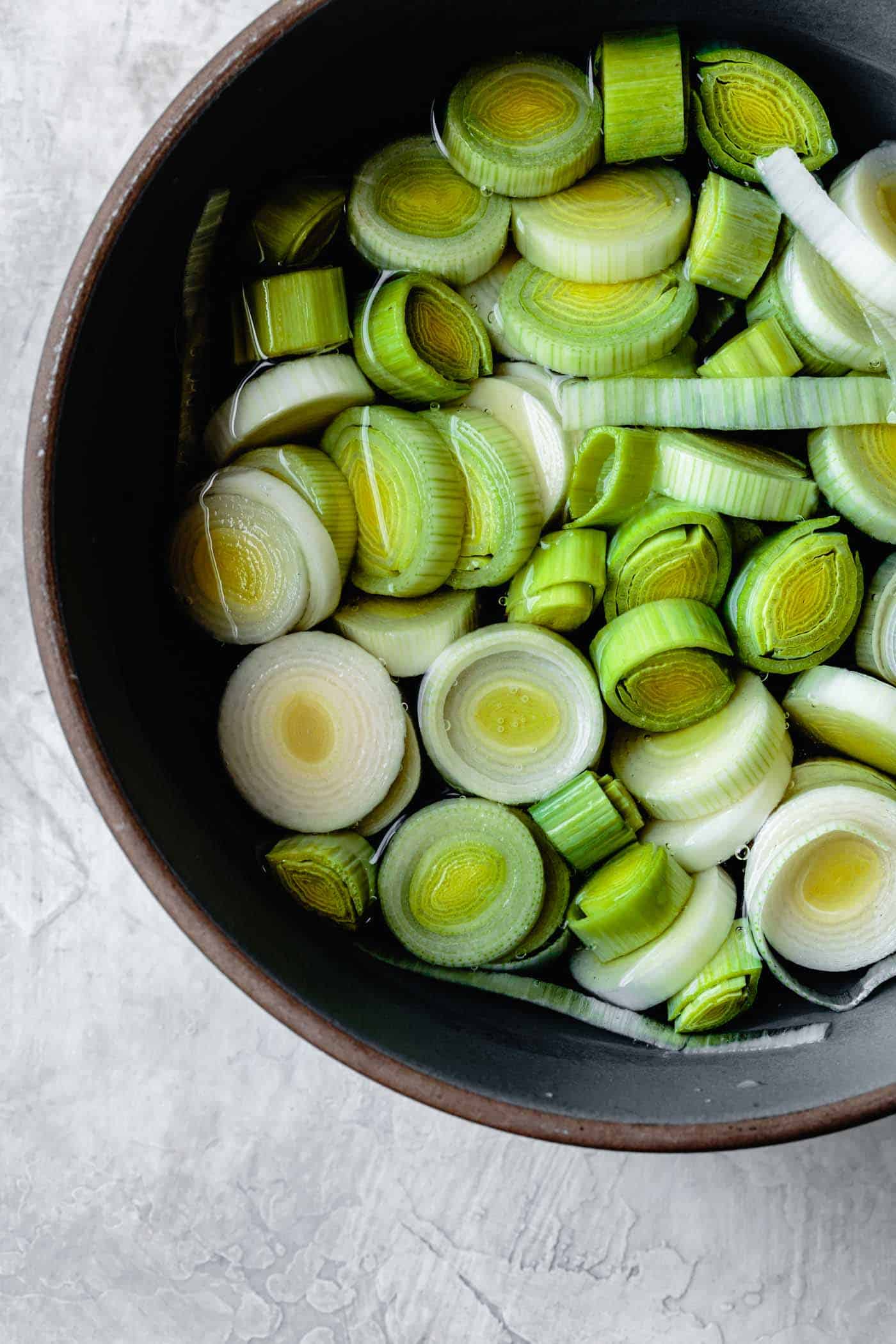 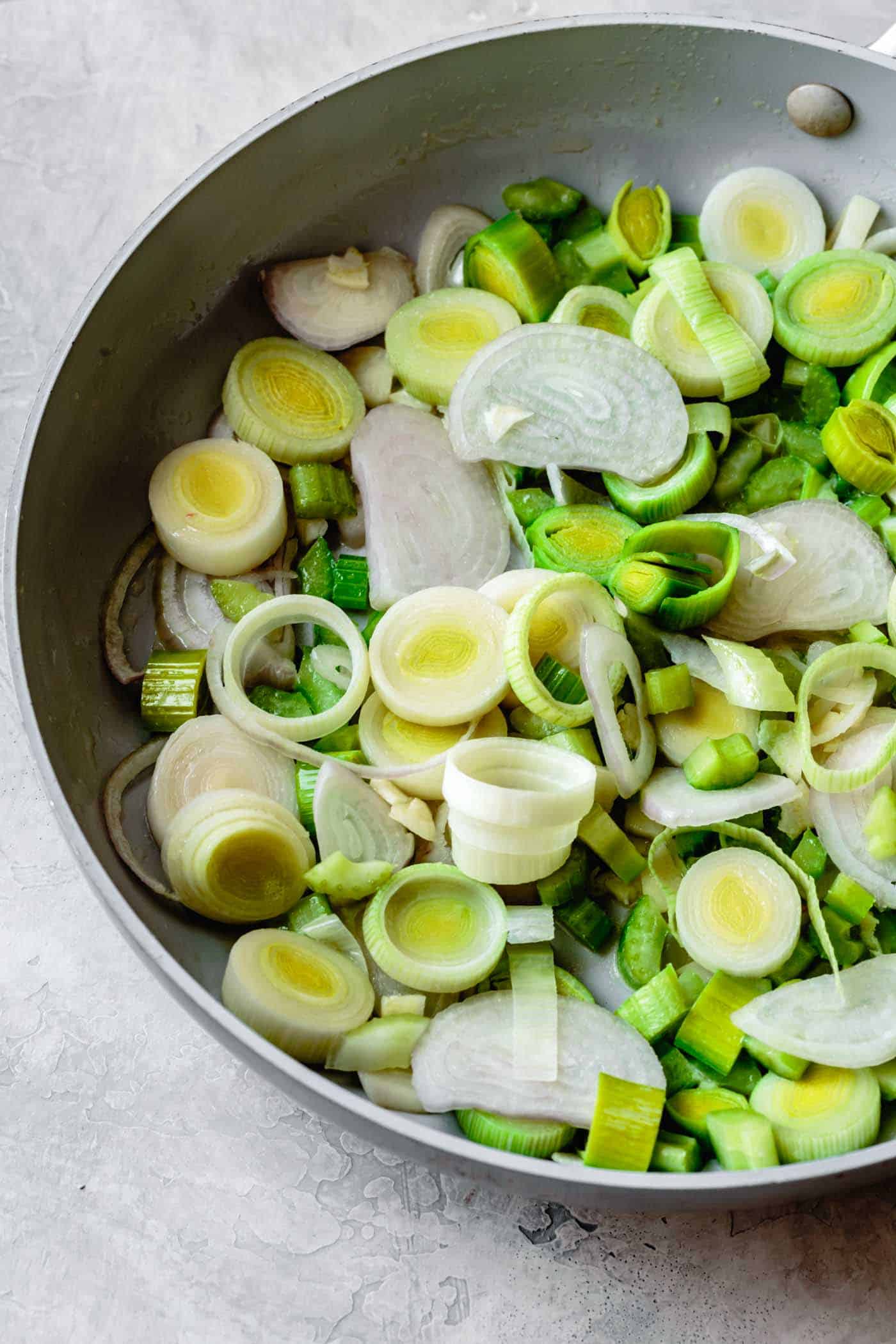 How to Make Stuffing from Scratch

It's easy to make a healthy stuffing recipe starting with raw ingredients. After you've prepared your bread, sauté leeks, shallots, garlic, and celery in butter until tender. Deglaze with white wine to further tenderize the veggies. Then toss all of this with bread and fresh herbs. Whisk together the egg and veggie stock, then fold this into the bread mixture. Let sit 5 minutes to let the bread absorb some liquid.

Now layer the stuffing into a baking dish with some crumbled goat cheese. Dot the top of the stuffing with more butter – this makes the top divinely crispy and bronzed. Some stuffing recipes call for covering the stuffing and baking it at a low temperature. Then you uncover the stuffing, increase the heat, and bake it until the top is crisp.

I take the easy way in this recipe and simply bake the stuffing uncovered at 350º for about 45 minutes. The bottom layer stays moist and tender, the top pieces crisp up, and the cheese gets melty and gooey.

Break through the crispy, craggy crust of this gluten-free stuffing and you'll uncover a moist and tender middle loaded with veggies and herbs. The warm scent of white wine and fresh herbs perfumes the dish, bringing you back to Thanksgivings and Friendsgivings past. 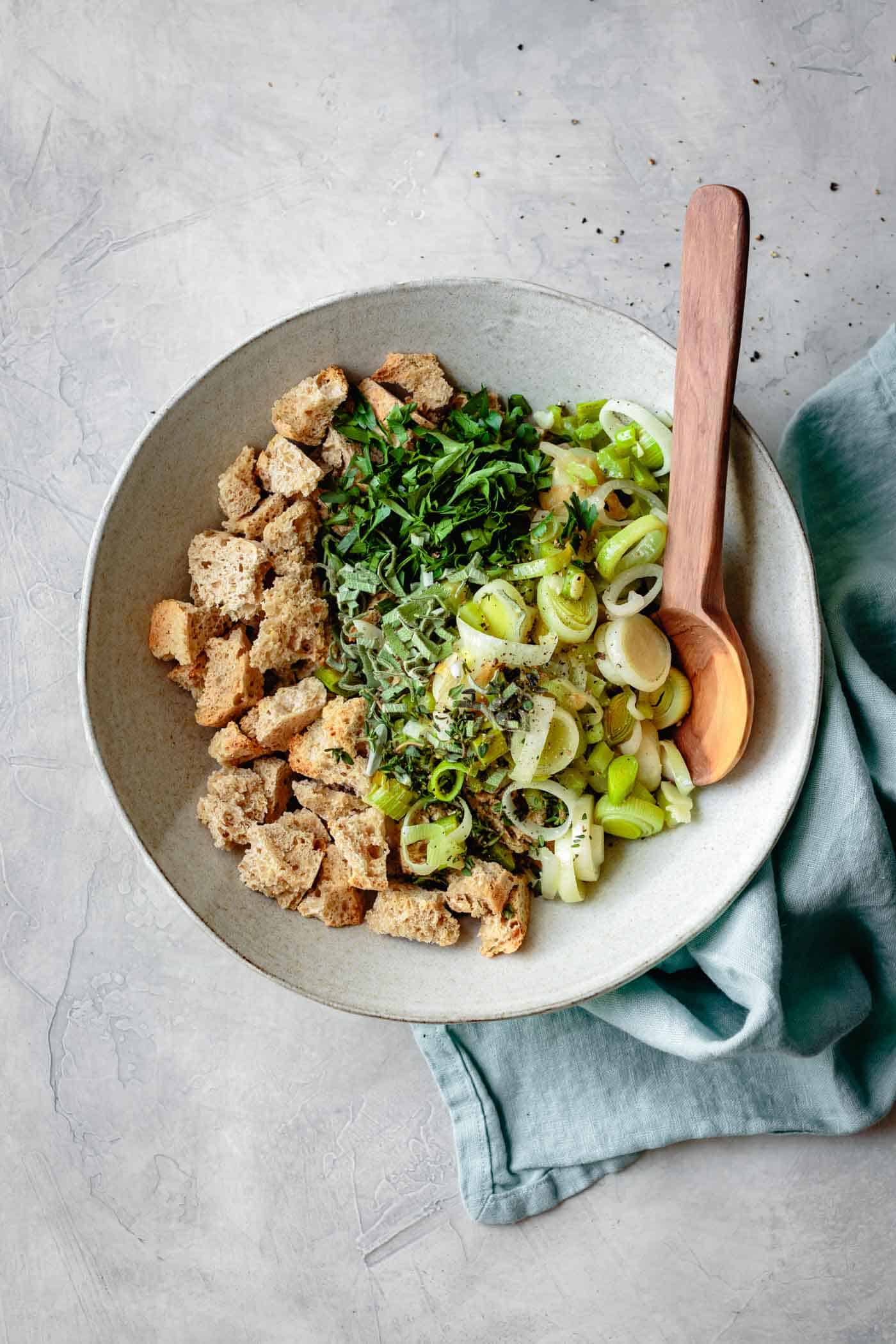 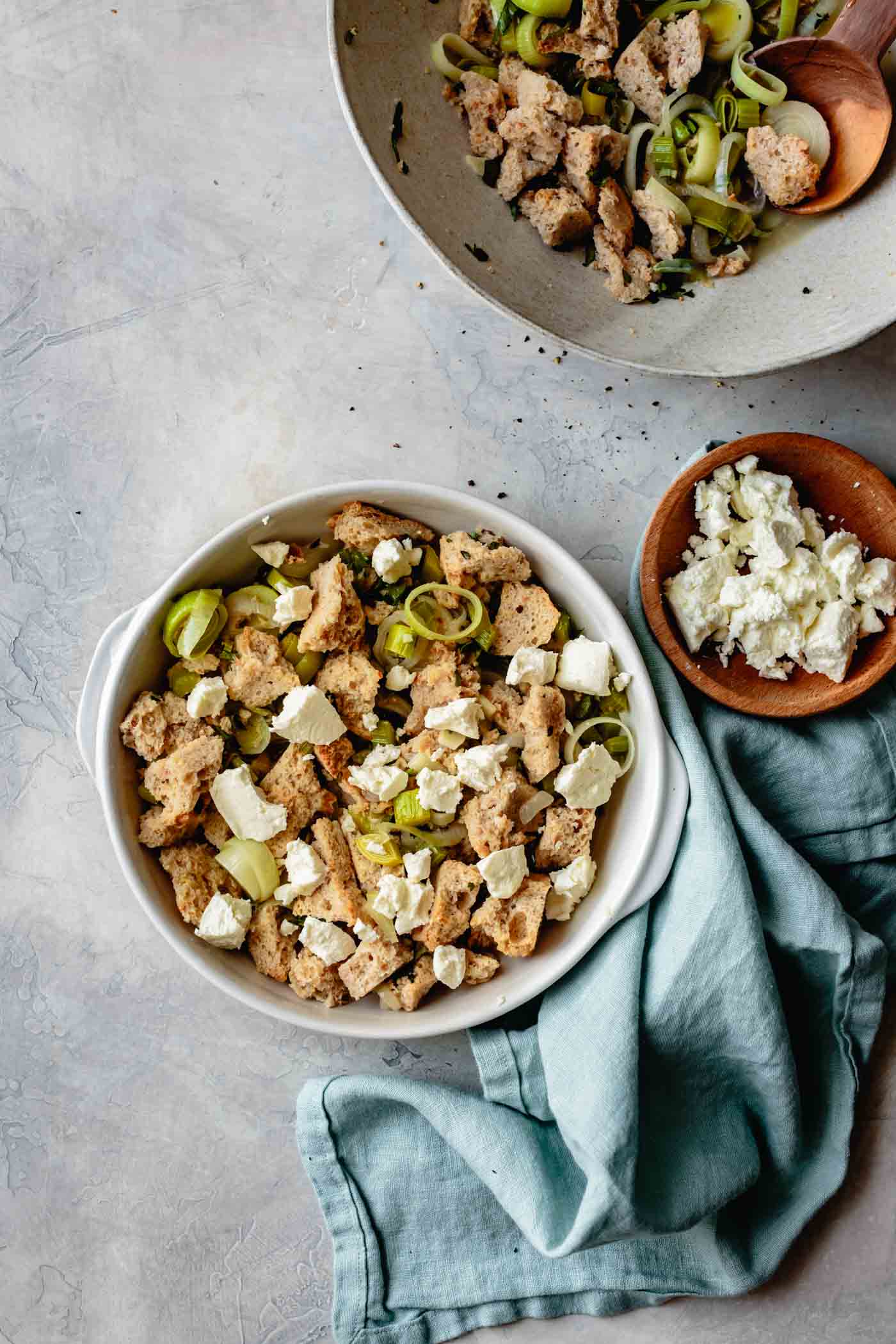 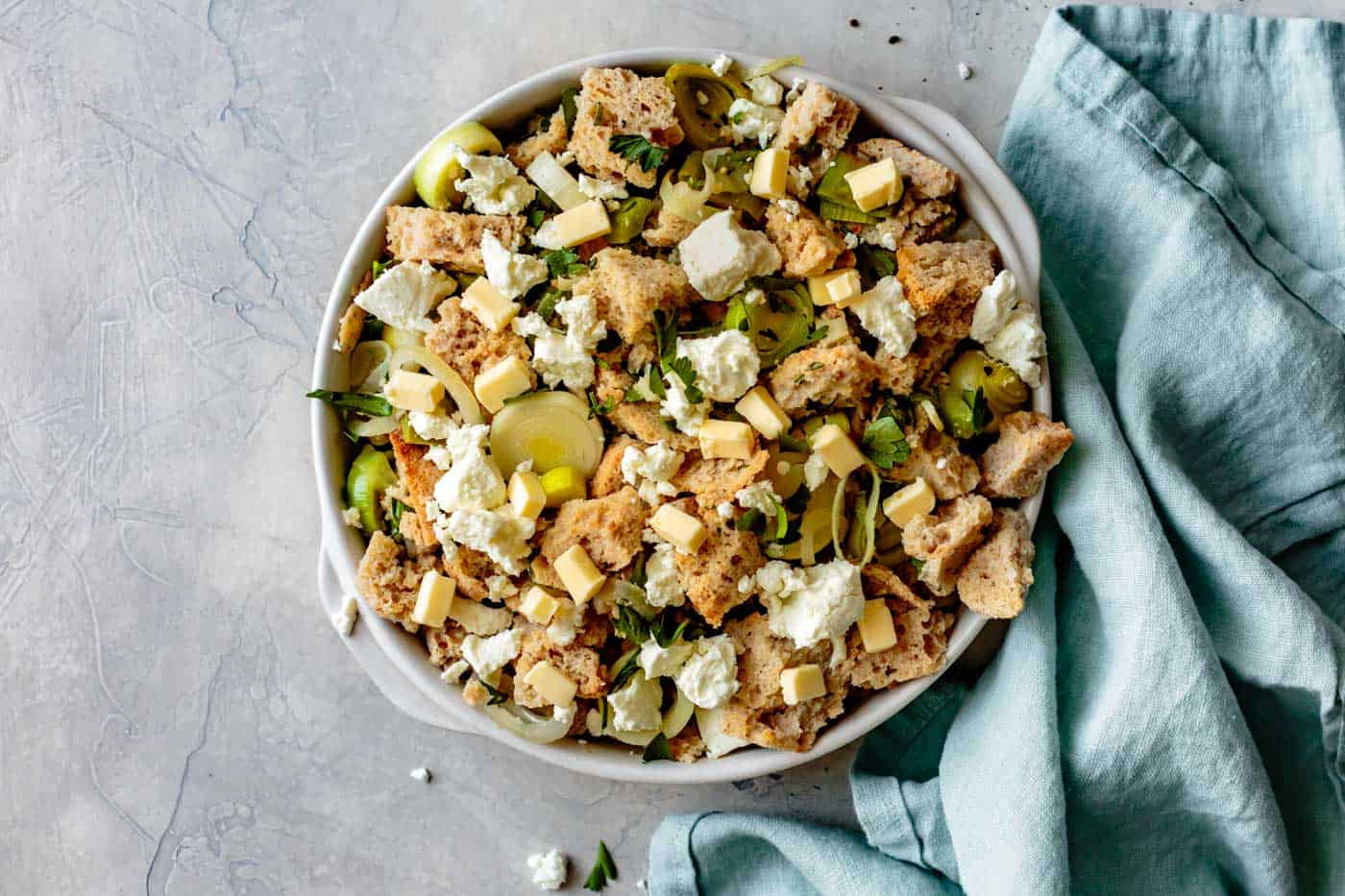 Stuffing vs. Dressing – What's the Difference?

Stuffing is traditionally used to stuff a turkey, whereas dressing is baked in a dish on its own. However, stuffing was always the term family used, always as a stand-alone dish. Stuffing seems to be the more commonly used term today, probably to differentiate "dressing" from salad dressing. So this gluten-free stuffing recipe is also a gluten-free dressing recipe. But whatever you call it, it's absolutely delicious. 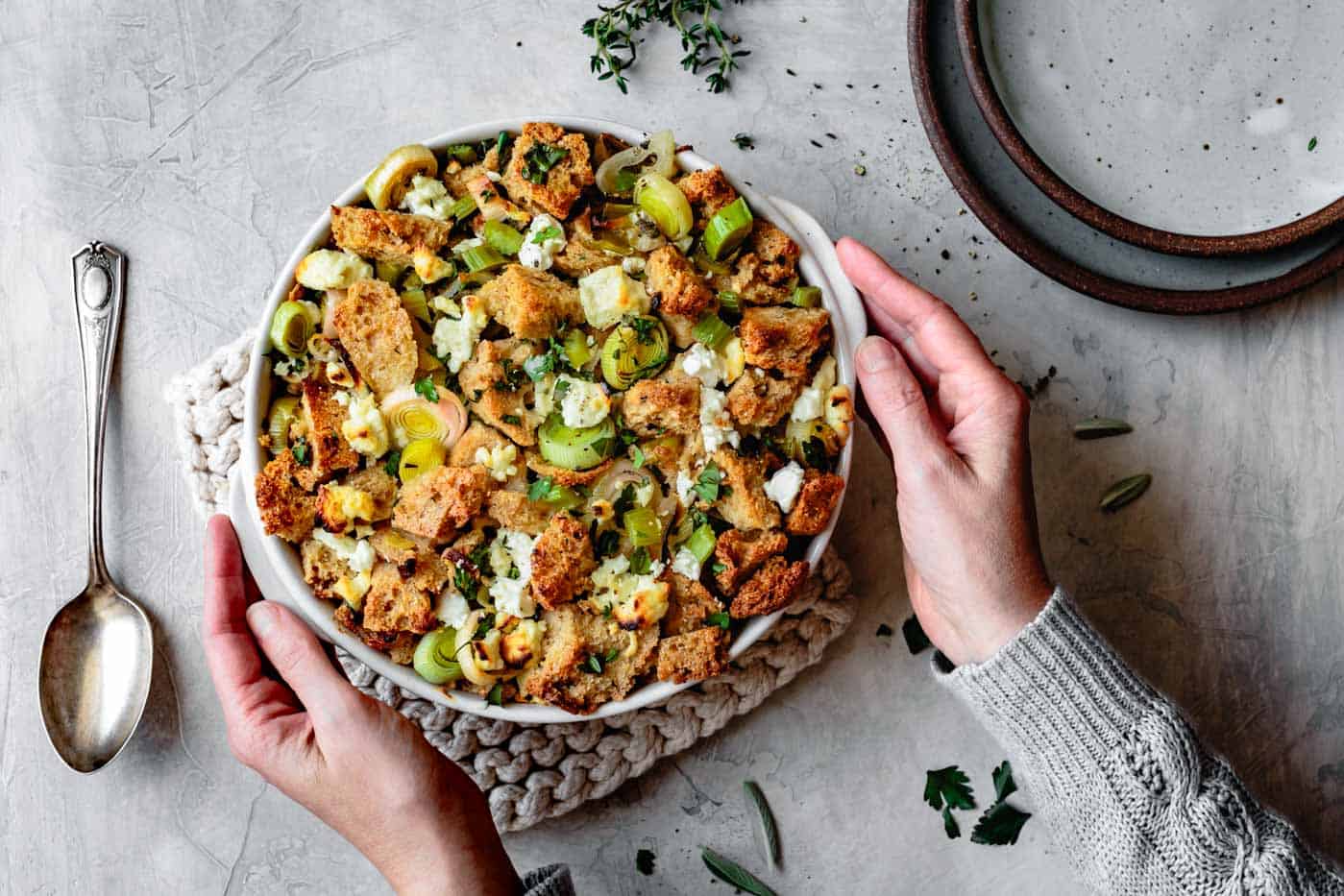 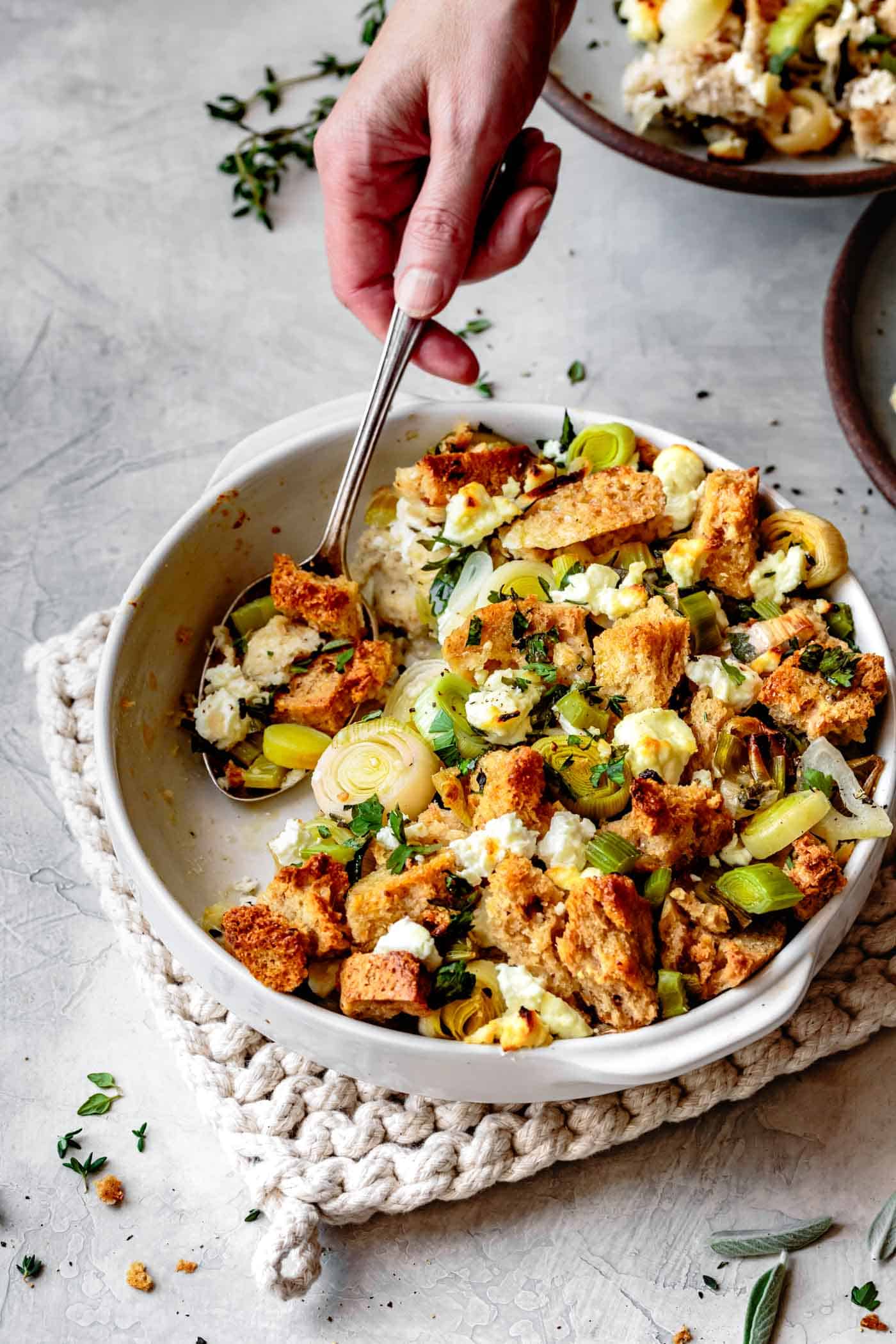 Thanksgiving All Year Round

Stuffing is a dish I have only ever eaten on Thanksgiving and, when I'm lucky enough to score some leftovers, the 1-3 days following. But this gluten-free stuffing recipe makes a decent vegetarian main dish thanks to the addition of creamy goat cheese and lots of veggies. I would gladly eat this any day of the week.

Serve this on Thanksgiving or Friendsgiving alongside all the other traditional dishes. Get the recipes for my gluten-free vegetarian Thanksgiving meal here. Or whip this up for an easy weeknight meal the rest of the year. It's sure to be a hit any day. 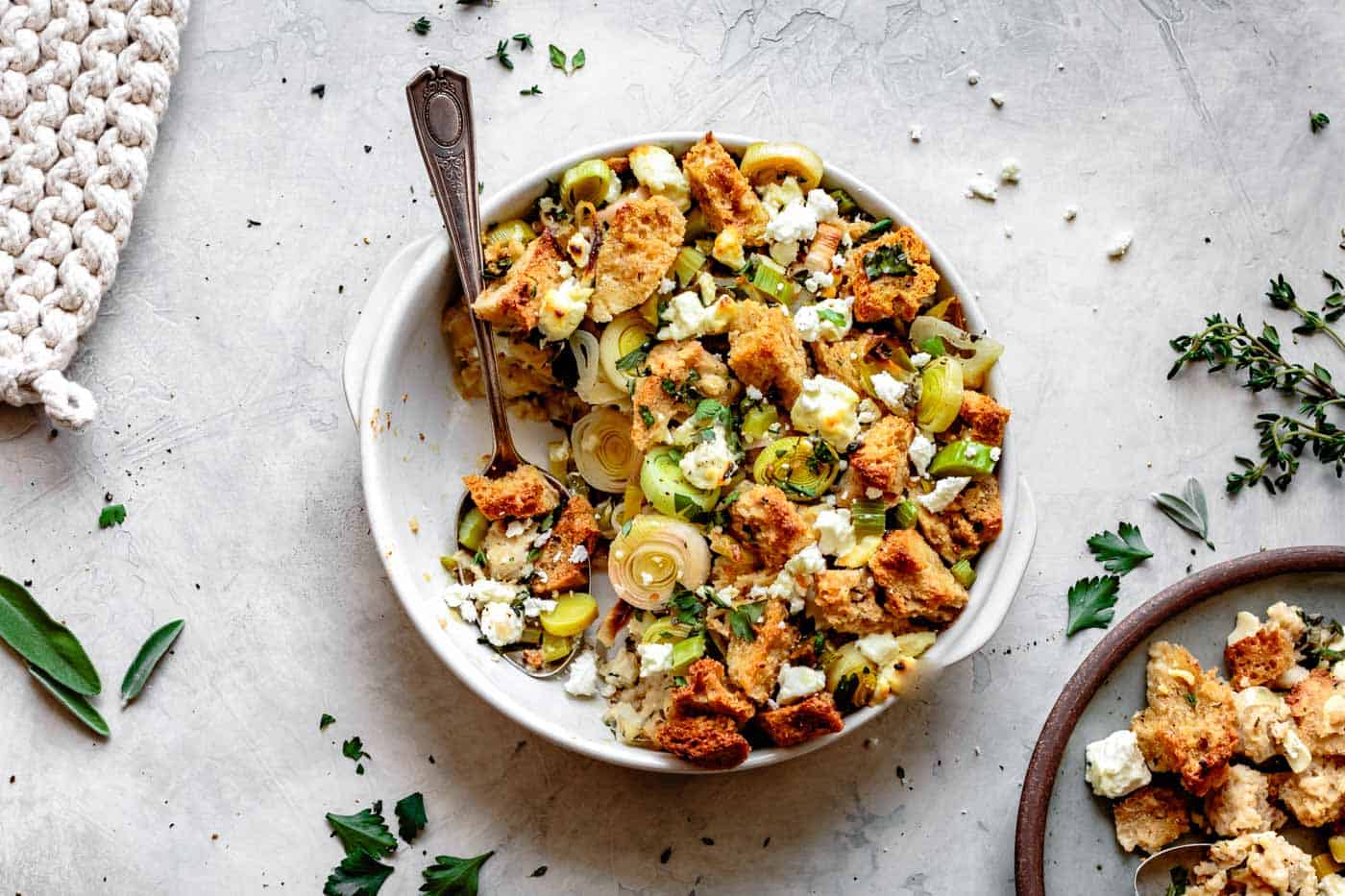 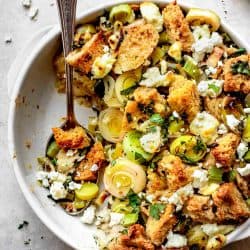 To feed a crowd: double the recipe and bake it in a 9x13-inch baking pan. If gluten isn't an issue: use any rustic wheat bread you like, such as a sourdough boule or batard. Make ahead options: The stuffing can be baked the day before, cooled, covered, and chilled. When ready to serve, uncover the stuffing and heat in a 350º oven until warmed through, about 20 minutes. If the stuffing dries out, sprinkle with a bit more vegetable broth to moisten. Alternatively, prepare the bread and vegetables the day before, then assemble and bake the stuffing the day of serving. 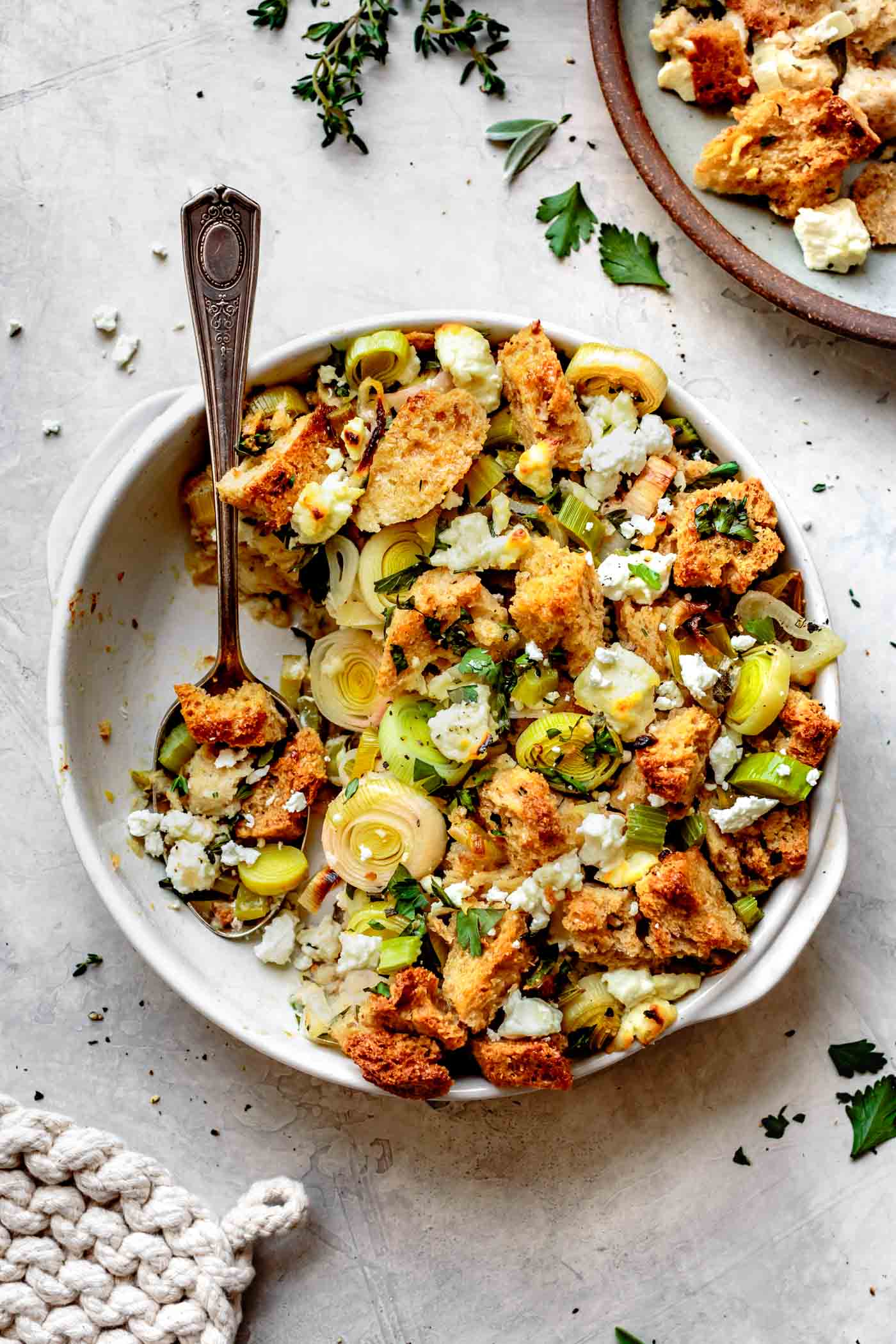 A dear friend brought me pounds and pounds of home

#appleseason I'm here for you! Some of my favori

GF pumpkin muffins are here, with DF, vegan, and l

This GF DF pumpkin bread has been a reader favorit

Sundays are for gluten-free pancakes ✨ These ar