Warm apples, buttery spiced streusel, and a scoop of drippy ice cream melting over the top – this foolproof gluten free apple crisp makes a cozy dessert on chilly fall and winter nights. Use dairy-free butter and ice cream to make it vegan, or swap in peaches or berries during the summer. 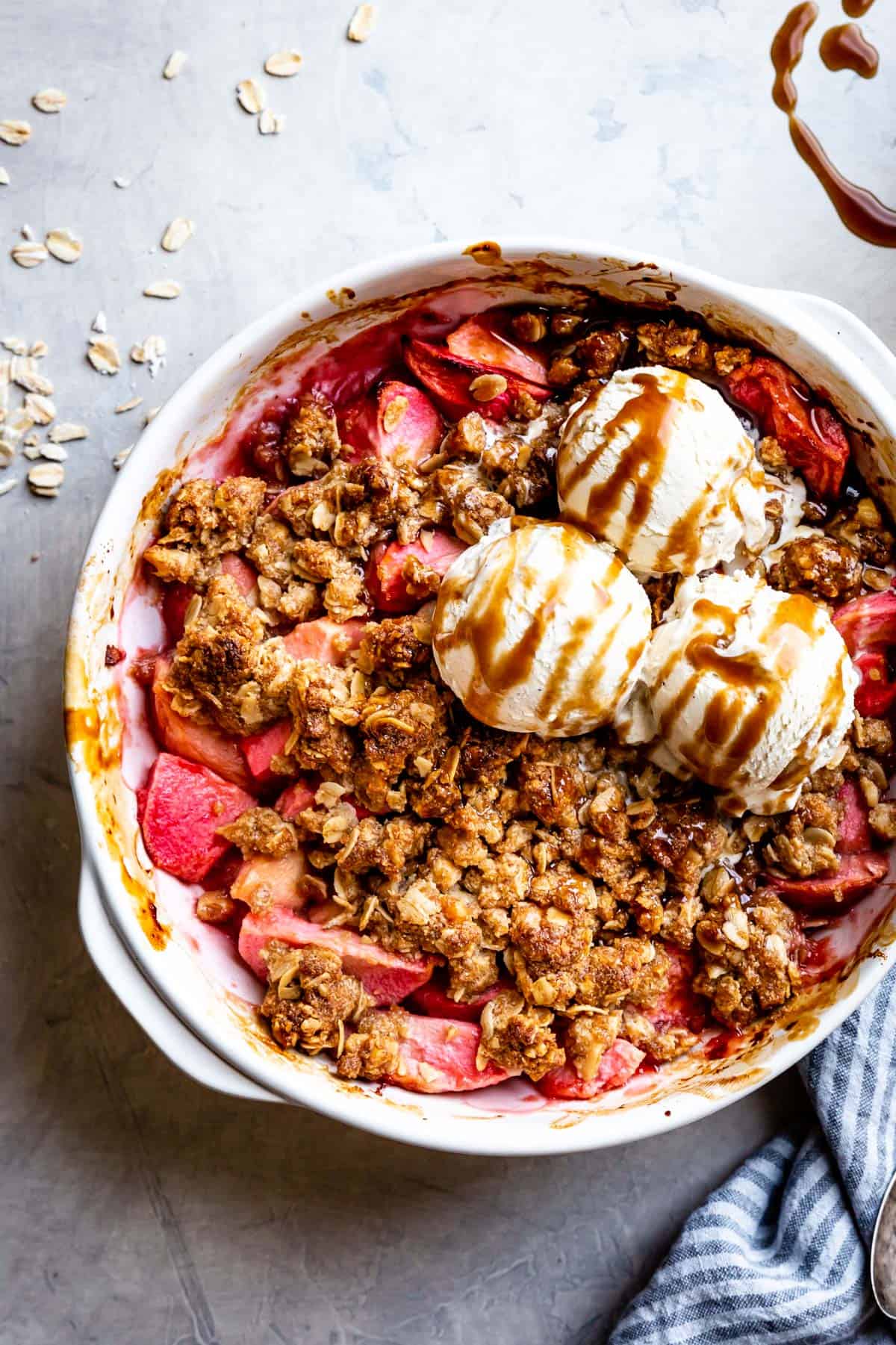 Crisp is the dessert I'm almost always craving (along with pudding and chocolate anything). It's easy to whip up with nearly any fruit, from rhubarb to persimmons and everything in between. When topped with a big scoop of melty ice cream, crisp becomes dessert nirvana.

This gluten free apple crisp recipe is as easy as it is versatile. It takes little hands-on time, makes enough for 4 servings, and is easily doubled or tripled for a crowd. Plus it works as well with peaches as it does with any baking apple (pink or otherwise!) 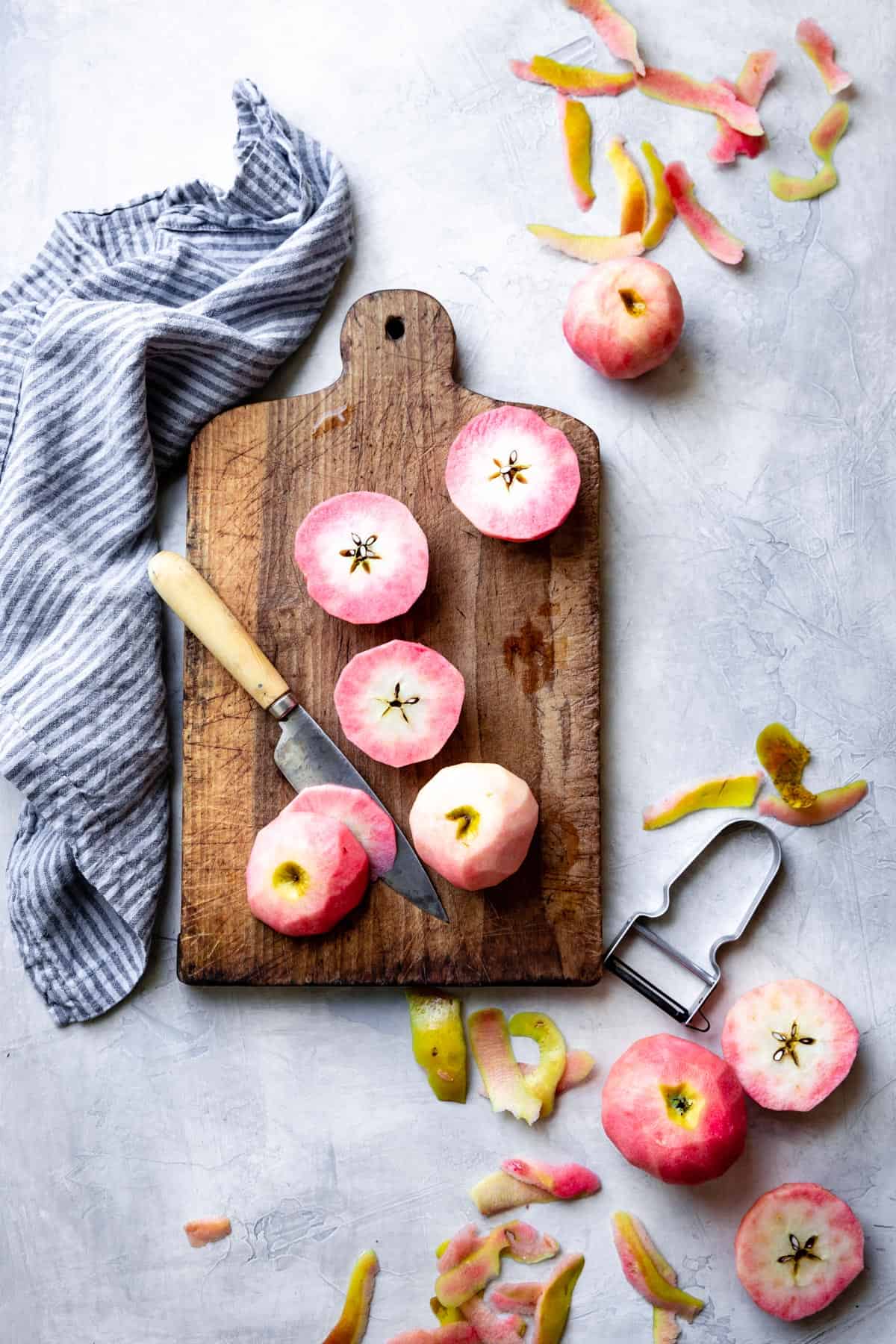 I adapted this gluten free apple crisp recipe from a hazelnut cranberry pear crisp that I developed for GFF: Gluten Free Forever Magazine last fall (the issue is available here for download). I loved the way the nutty streusel stood up to the baked fruit, so this year when I found pretty pink pearl apples at the co-op, I made an almond flour version of the topping. I drizzled some butterscotch sauce on top because why not? It was love at first bite. 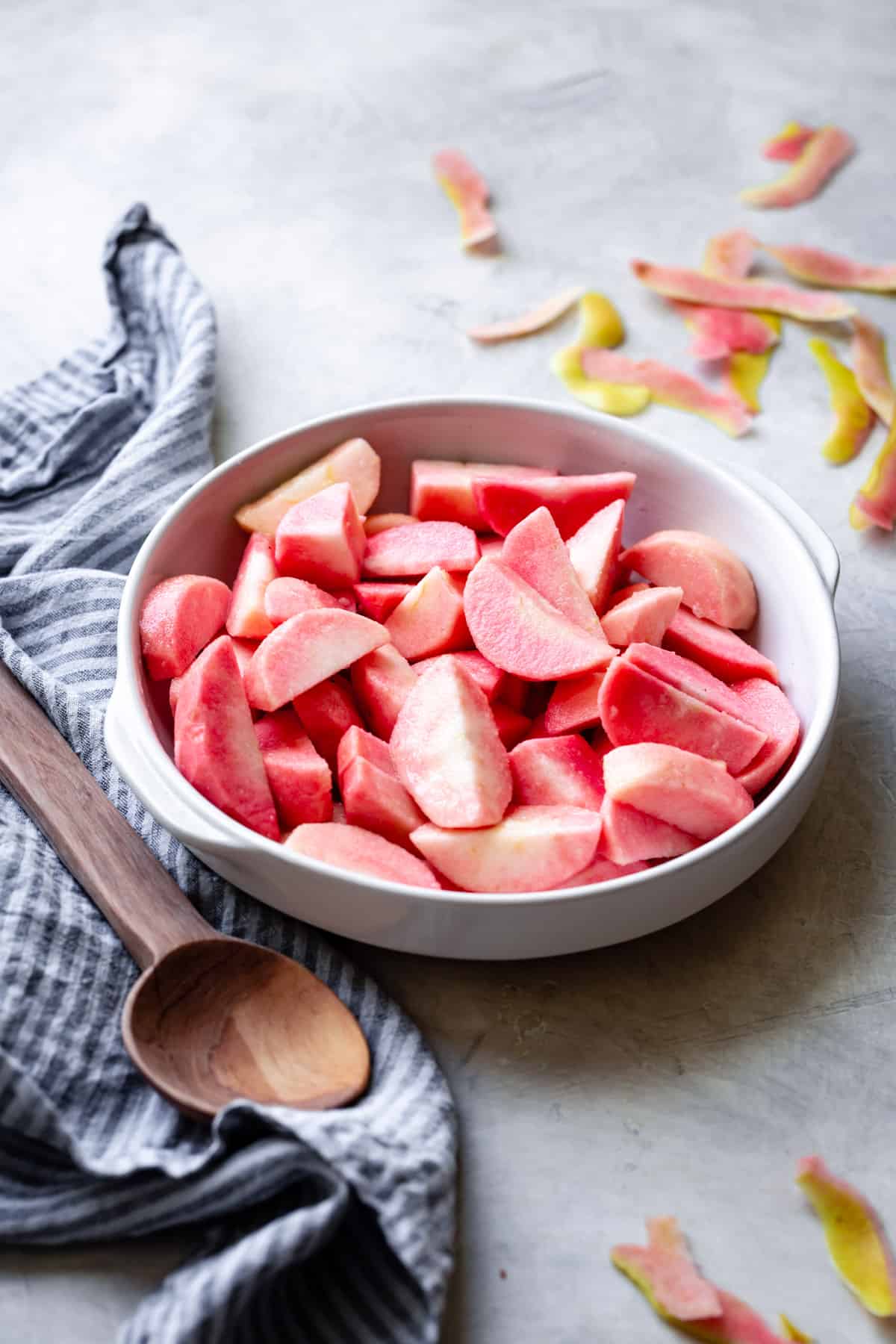 Anatomy of a Fruit Crisp

I'm highly opinionated about crisps. First and foremost, the topping should live up to its name, holding its own in the oven rather than sogging into the juicy fruit. There should be a good fruit-to-crisp ratio so that you get a little bit of each in every bite.

The fruit should have good acidity to contrast with the sweet streusel topping. And the topping should smack of butter and brown sugar, with chunky elements from oats and nuts, and a whiff of spice. There should be enough sugar and butter in the topping that it melts ever so slightly into the fruit as it bakes. A few key techniques and ingredients make this crisp shine. 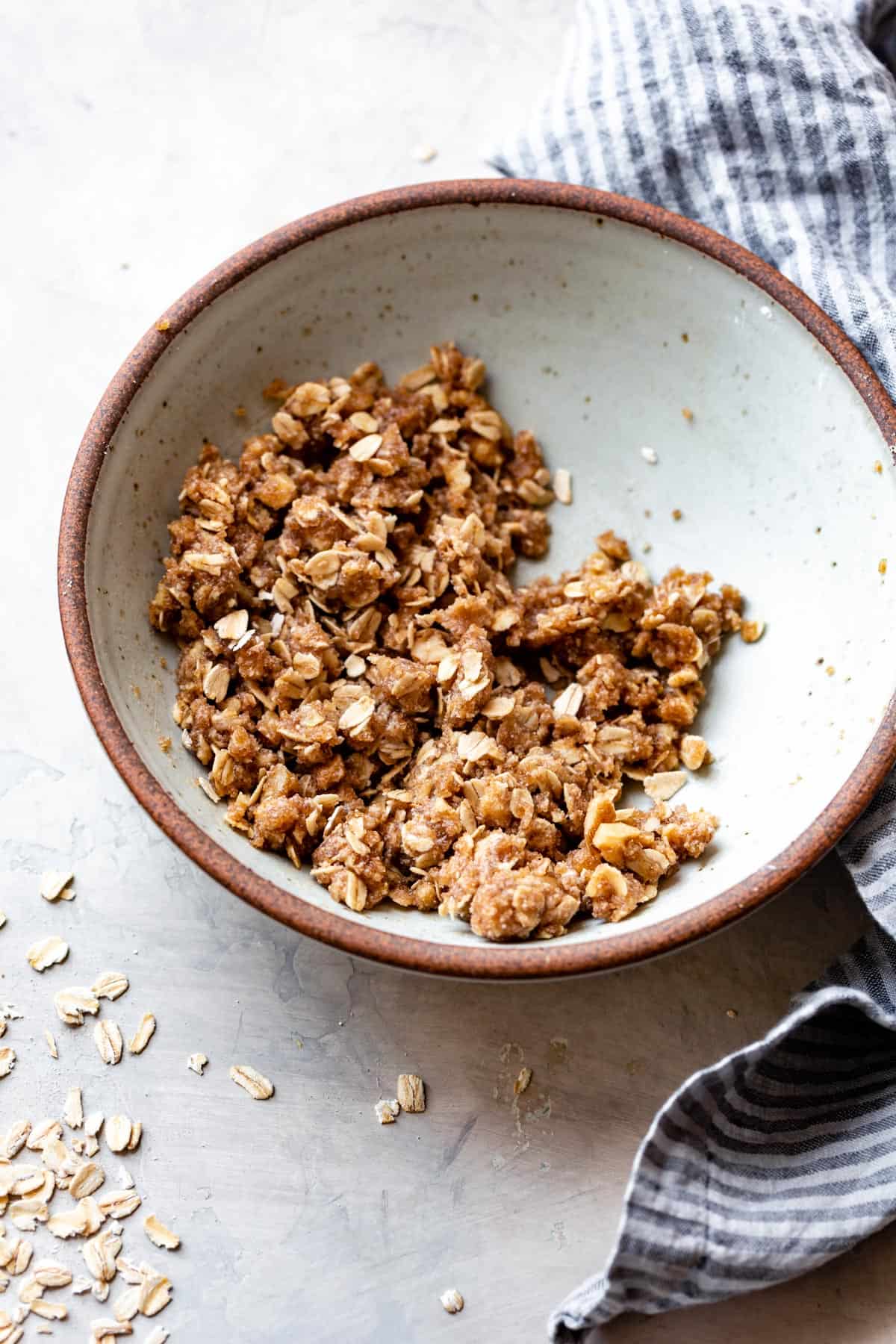 Gluten free crisp topping can be tricky since many gluten free flours tend to become soggy when met with bubbling, juicy fruit. But this one holds up beautifully thanks to a trio of flours – almond flour, oat flour, and tapioca flour. Together with butter and brown sugar, they make a pebbly topping that tastes like crisp oatmeal cookie.

Rolled oats and pecans or walnuts add chunky texture, while brown sugar and a hint of cinnamon and nutmeg add fall spice that contrasts bright apple filling. Just mix the dry ingredients together and stir in melted butter or vegan butter until the topping clumps together. 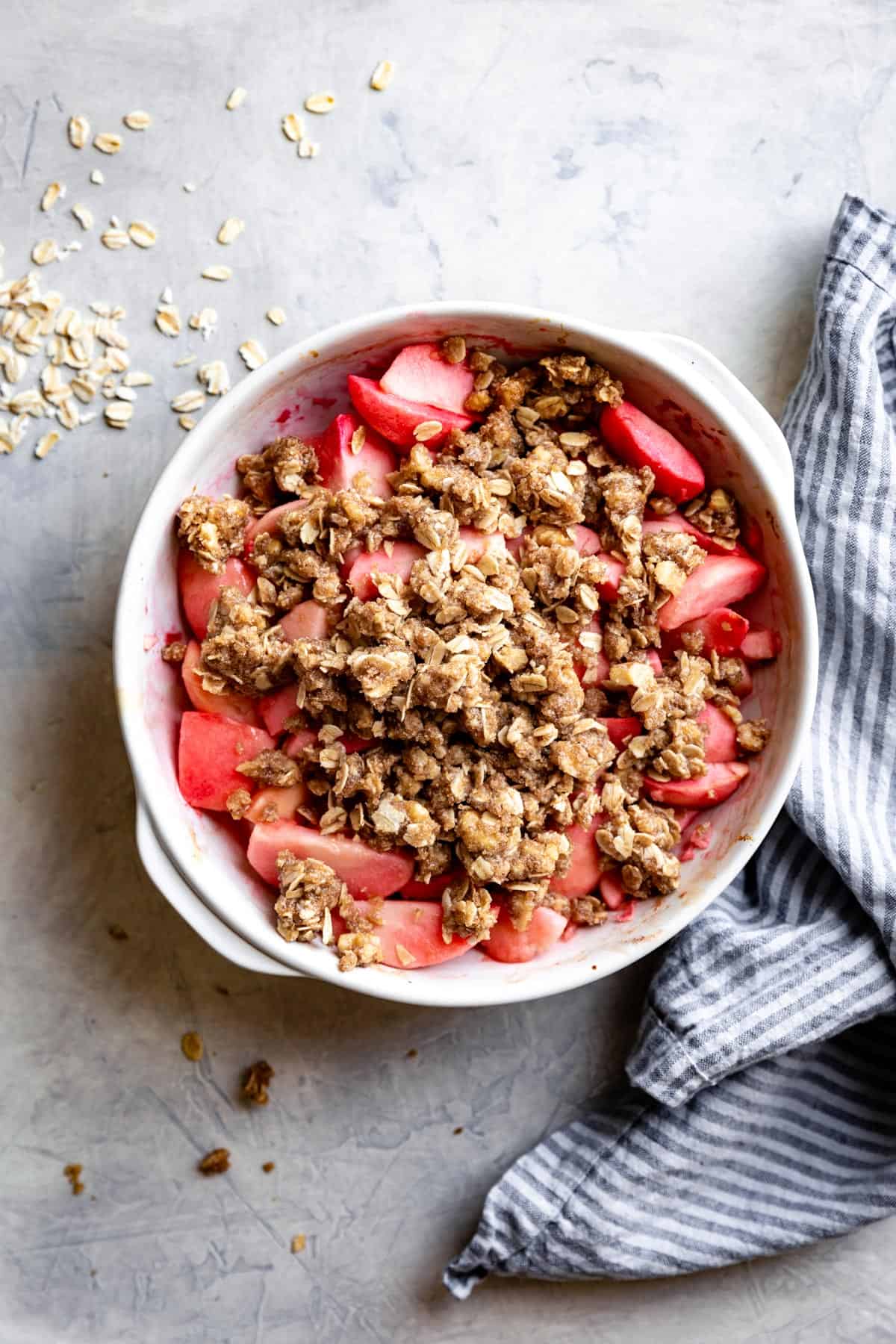 What are the best varieties of apple to use in an apple crisp?

Choose apples that have good acidity and hold their shape when baked. Pink pearl apples, used here, don't just look pretty, they also make a bright, flavorful filling. Granny Smith, Pink Lady, Honeycrisp, Braeburn, Fuji, Cortland, and Gala and heirloom varieties such as Winesap, Belle de Boskoop, and Northern Spy all bake into nice, tangy crisps. You can also use a mix of the firmer apples mentioned above, plus some softer apples such as Gravensteins or Macintosh.

Prebaking the apples is essential when making apple crisp and serves three purposes. First, it draws out the juices from the fruit ensuring a gooey bottom layer. Secondly, stirring the warm fruit before adding the topping ensures even baking. And third, it releases steam from the fruit, helping the topping stay crisp. 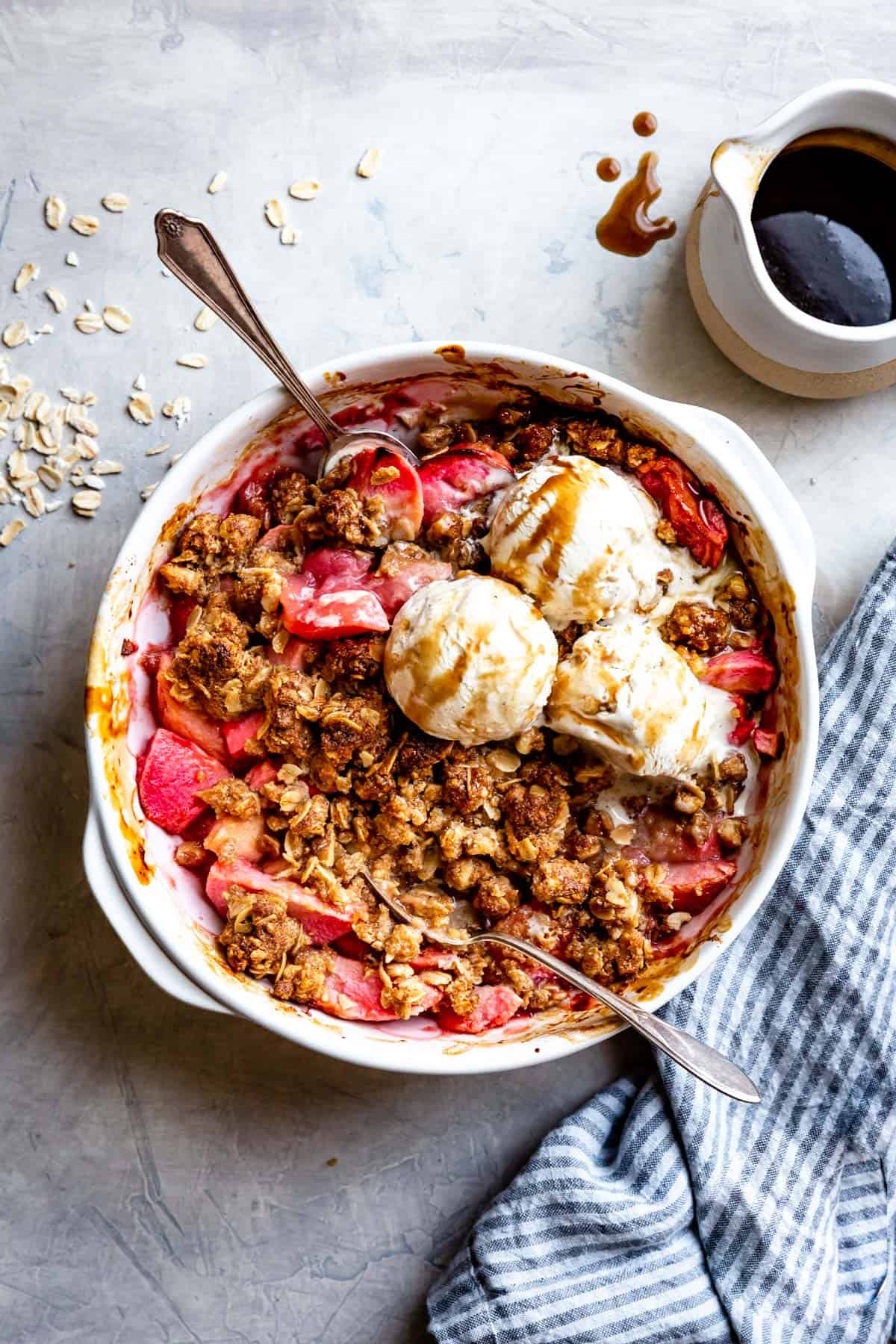 What's the difference between a crisp and a crumble?

Crisp vs. crumble is a hotly debated topic with different answers depending on who you ask. I wrote about this in a post from several years back, which I cheekily titled "gluten free apple crisple" (SEO be damned! Also, if you're lacking the gluten free flours called for here, that recipe creates a similar topping from rolled oats and nuts whizzed in a food processor.)

Some sources say the the difference between crisp and crumble is regional. Others insist that crisp toppings contain just butter, flour, and sugar whereas crumbles use bigger, chunkier ingredients such as oats and nuts. Some recipes use leavening such as baking powder for a lighter topping. And still others assert that the two terms are now used interchangeably: crisp = crumble and vice versa.

For me, I'm never one to quibble over a crumble or a crisp as long as there's a rustic fruit dessert in my face! 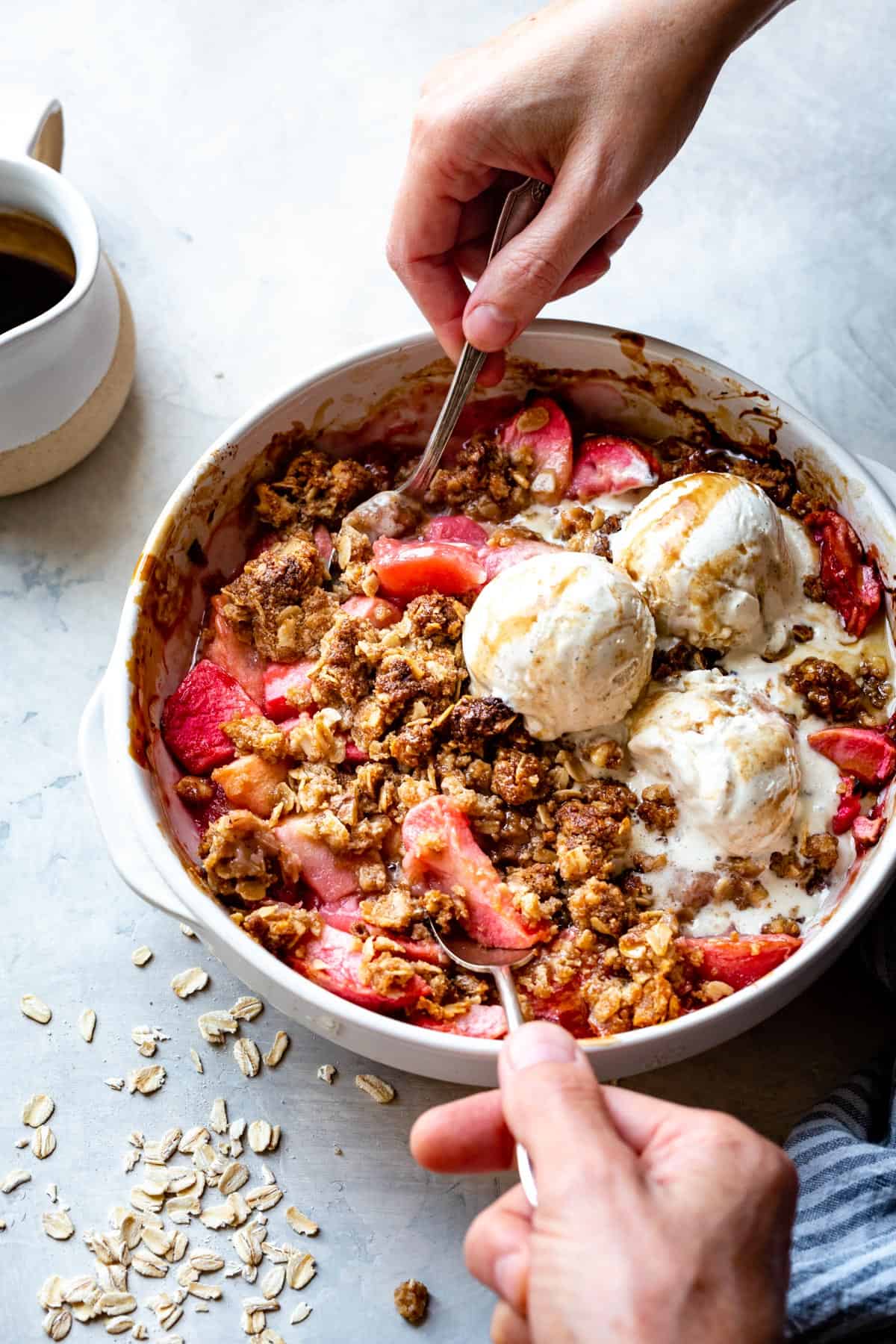 All the Crisps and Crumbles

Are you as crazy for crisp as I am? Here are some of my favorite versions.

And if you're still hungry for fruit desserts, pick up a copy of Alternative Baker: Reinventing Dessert with Gluten-Free Grains and Flours. It has over 100 recipes for gluten-free, whole-grain, fruit-forward desserts including a whole chapter dedicated to crisps, cobblers, and pandowdies. 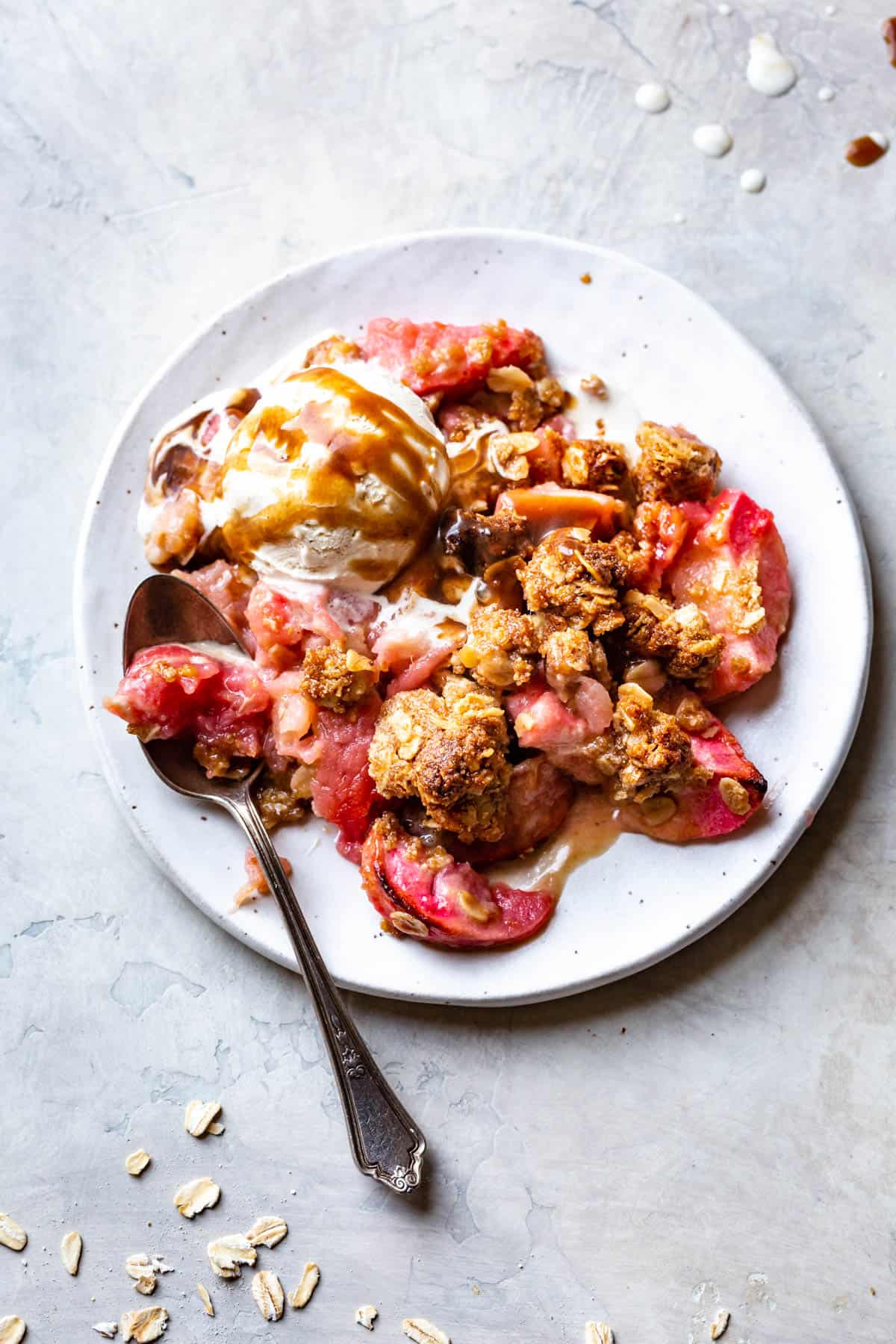 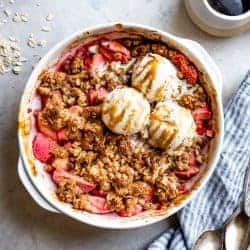 Mix it up by using peaches, nectarines, cherries, or berries in the summer, or try other fall fruits such as pears, cranberries, persimmons, or quince, all sweetened to your taste. Try the hazelnut variation. For nut allergies, try using finely ground sunflower seeds in place of the almond flour and pumpkin seeds in the topping. To serve a crowd, double this recipe and bake it in a 10-inch skillet, or triple it and bake it in a 9 by 13-inch baking dish, increasing the bake time as needed for the fruit and filling. Nutritional values are based on one of four servings. 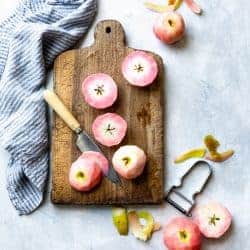 Print Recipe  /  Pin Recipe
Use hazelnut meal instead of almond flour and hazelnuts instead of walnuts.
Author: Alanna Taylor-Tobin
Making this? I'd love to see!Tag your snaps @The_Bojon_Gourmet and #bojongourmet! 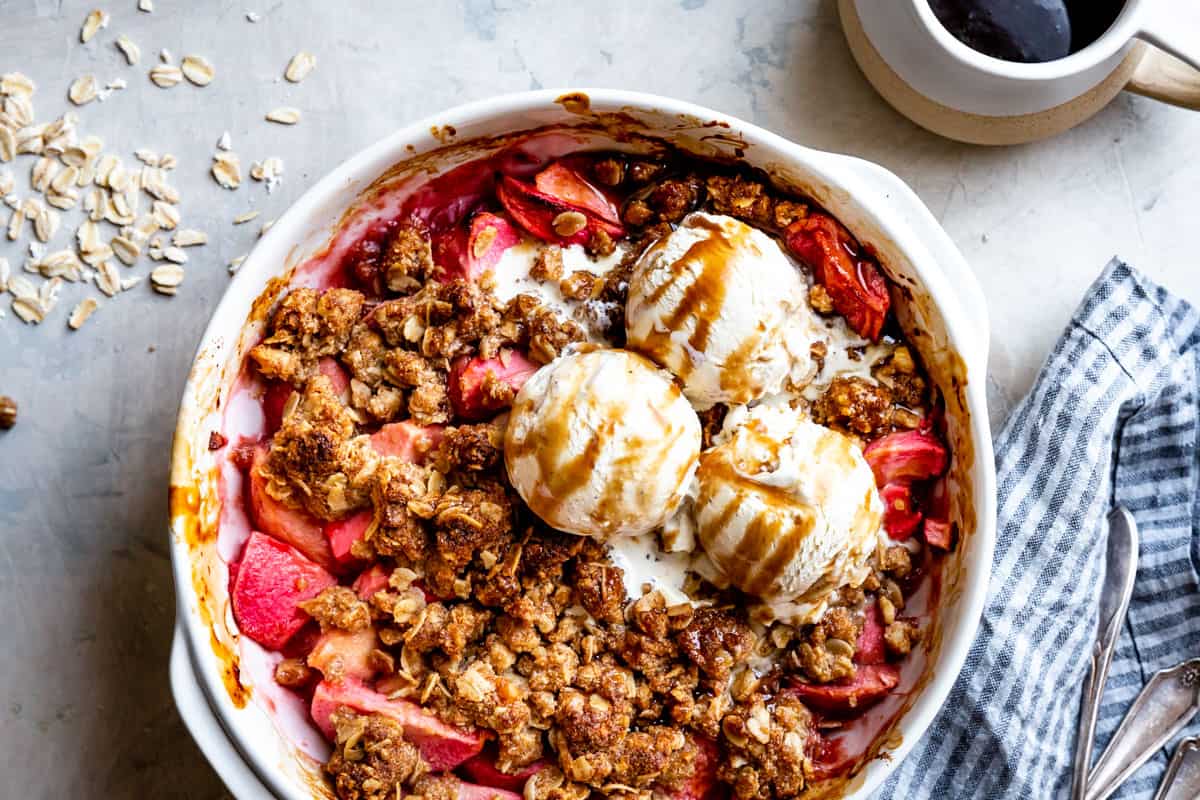