This ginger-spiced plum crumble gets a chewy/crunchy topping that tastes a bit like an oatmeal spice cookie combined with tangy roasted plums. A late summer stunner of a dessert. Plus a gluten-free option. 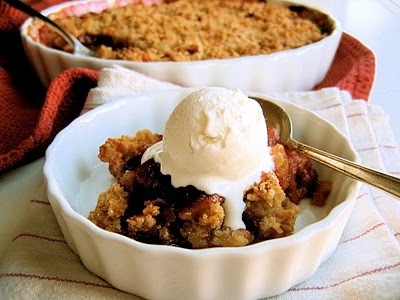 You know the ones.

'Oh, I don't like tomatoes,' they say, with a wrinkle of the nose.

'Why not?' you gasp. 'Have you tried local, dry-farmed tomatoes? They taste like crack candy, so sweet and luscious. How could you not like them?'

'Yeah...' they trail off, trying to come up with a logical response, their brains clearly addled from vitamin C deficiency. Finally they shrug, 'It's a texture thing.'

As a 'flavor person,' I have a hard time understanding how the texture of a food can cause one to dislike said food, assuming they find the flavor pleasing. But people have aversions to all kinds of comestibles for this reason: avocados, eggplant, mushrooms, sushi. I even know one fellow who refuses to touch anything creamy, eschewing even such heavenly substances as ice cream and burrata.

And yet a bite of this plum crumble threatened to turn me into a texture person, in a good way.

I've made, and eaten, many fruit crisps in my life; with a scoop of melty ice cream, they come in at the top of my personal dessert hierarchy, both to make and to eat.

The crisp is one dessert where texture particularly counts: the fruit portion should be soft and juicy, but not soupy or overly-liquid. The crisp part should be buttery and delicate, but substantial enough to live up to its name.

This recipe on Molly's blog from two years ago caught my eye, and despite its unconventional mixing method, I decided to make it because of its creds: Luisa gave it rave reviews, and Molly liked it so well that she put it on the menu at her hubby's restaurant.

She describes the topping as 'cookie-like,' which I had a hard time imagining, but the description makes sense as, unlike most crisps, but like most cookies, it contains both egg and baking powder.

It looked so simple that I decided to make it when my über-talented and angelic friend Stephen offered to come shoot me in my kitchen (photographically, that is). (This was probably the fastest recipe I've ever made for this site, as I didn't have to keep stopping to wash my hands and take pictures. Can I have a personal camera crew for my birthday, please?)

As for the unconventional mixing method: Plums are tossed with small amounts of sugar, flour, and candied ginger, then laid in a baking dish. The flour and sugar for the topping get rubbed with egg until sandy, then sprinkled over the plums. The butter is melted separately and then, get this, drizzled over the topping. It doesn't seem like it should work.

But then you pull the crisp from the oven, all bubbly and perfect-crisp-looking, and you use a spoon to crack through the topping. And you bite into the crunchiest crumble you've ever tasted. The topping is crunchy on the outside and soft and chewy where it dips down into the tender fruit, like a big ginger cookie, only rustic and pebbly. In fact, I've a mind to call this a 'plum crunch' rather than a crumble. Or maybe 'plum chrunchle.' But I'd fear my reputation.

Plums and ginger make a stellar combination, the spice and heat of the ginger somehow heightening and softening, at the same time, the sweet tang of the plums. The flavors are all at once bright and comforting, new and familiar. The word 'zingy' leaps to mind.

I've baked this twice in the past week, not because I needed to adjust anything in the recipe, but just because I couldn't stop thinking about it and needed to have more. Also unlike most things that I bake, I didn't share it with anyone (excepting Jay), and though at first I regretted Stephen leaving before the crisp had finished its stint in the oven, I later rejoiced because it meant more crumble for me. 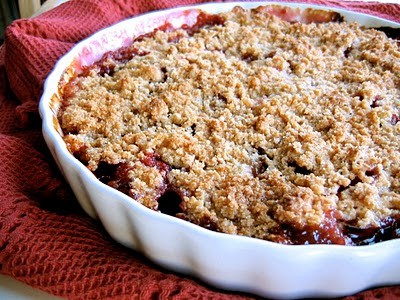 Also unlike most crisps, this one is just as good cold from the fridge; the ginger flavor comes forward, and the topping retains its crunch. It keeps surprisingly well for several days. I find it perfectly sweetened, and not at all inappropriate for breakfast with a big spoonful of plain yogurt. 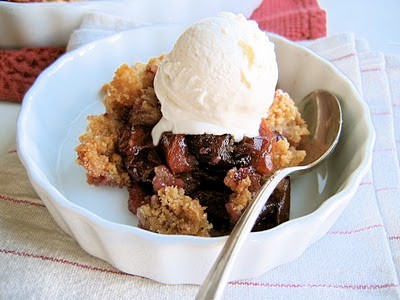 I keep thinking of the crunchy texture of the topping, how pleasing it is to eat. 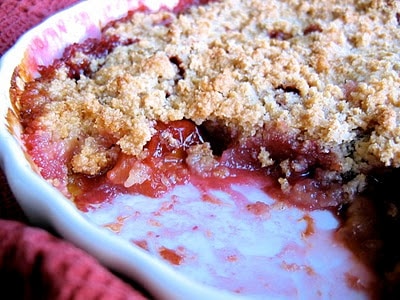 I just pray I don't turn into a texture person for good. Because I really like tomatoes. 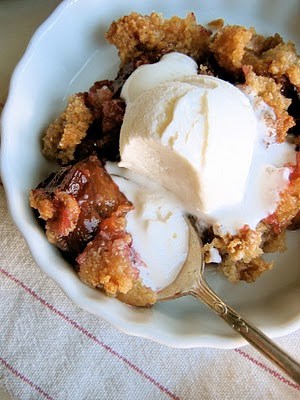 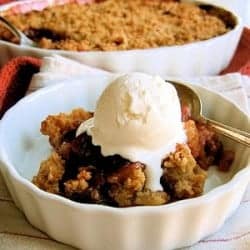 Print Recipe Pin Recipe
This easy fruit crumble bursts with the flavor of tangy-sweet plums sharpened with ginger and a touch of cinnamon and sea salt. The gentle spices bridge the transition from summer to fall when plums are at their peak. The chewy-crisp texture of the topping is completely addictive. Serve with something cold and creamy; plain yogurt or crème fraîche for breakfast, or sour cream, vanilla or yogurt-honey ice cream for dessert. See the variation below for a gluten-free version.
Alanna Taylor-Tobin
Prep Time: 15 minutes
Cook Time: 45 minutes
Total: 1 hour
Servings: 8 servings

Adapted from Marion Burros via The Wednesday Chef and Orangette. Molly says you can triple the recipe and bake the crumble in a 9x13" pan to feed a crowd. Gluten-Free Variation: Use cornstarch instead of flour to toss the plums. Instead of AP flour, use 3/4 cup oat flour, 1/3 cup almond flour, and 1/4 cup sweet rice flour. Reduce the sugar to 1/2 cup + 2 tablespoons. Alternatively, use the topping from this Gluten-Free Strawberry Rhubarb Crumble.  Nutritional values are based on one of eight servings. 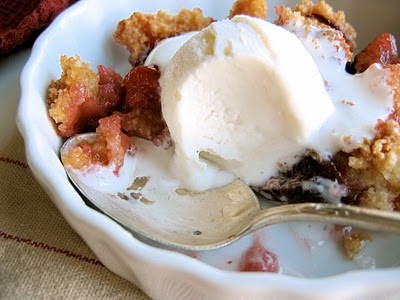