No one will ever suspect this chocolate cream tart of being gluten-free and vegan thanks to a buttery almond flour crust, silky cashew chocolate pudding, and fluffy coconut whipped topping. Crust adapted from Alternative Baker: Reinventing Dessert with Gluten-Free Grains and Flours. {For a no-bake, grain-free, refined sugar-free version of this tart, see this post.}

I've been dreaming of a vegan version of the chocolate truffle tart in Alternative Baker since I turned in the manuscript nearly 2 years ago, and I'm excited to (finally!) be sharing it today! So why did it take me so long to make this creamy, chocolatey dream a reality? 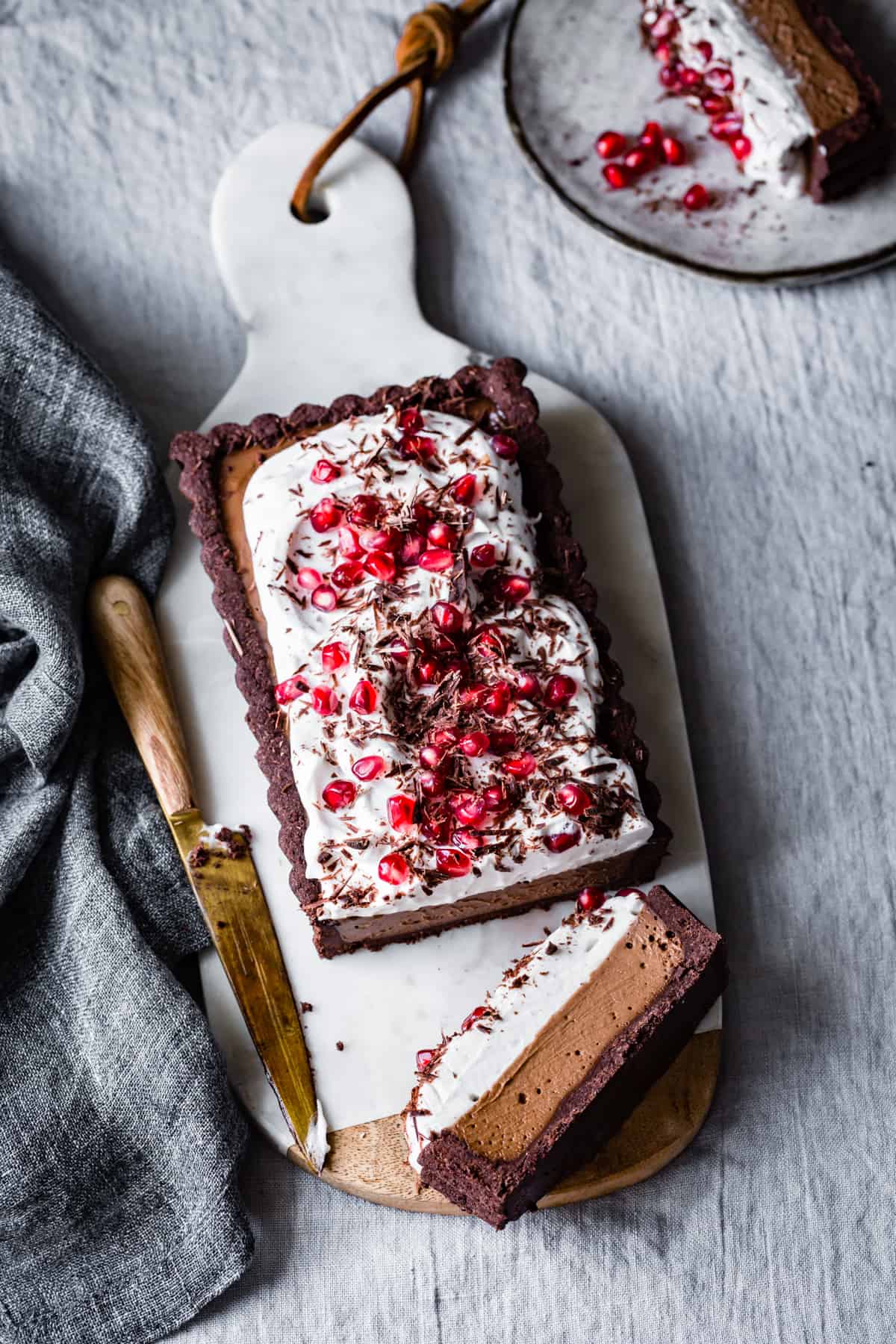 As with many things in this life, I found myself in analysis paralysis as to veganizing the recipe. I knew from experience that the cocoa almond crust from the book would work using non-dairy butter. I'm obsessed with Miyoko's non-dairy butter, which is made from cashews and coconut oil, and manages to taste even better than dairy butter. I can eat the stuff with a spoon. But the filling was another matter. 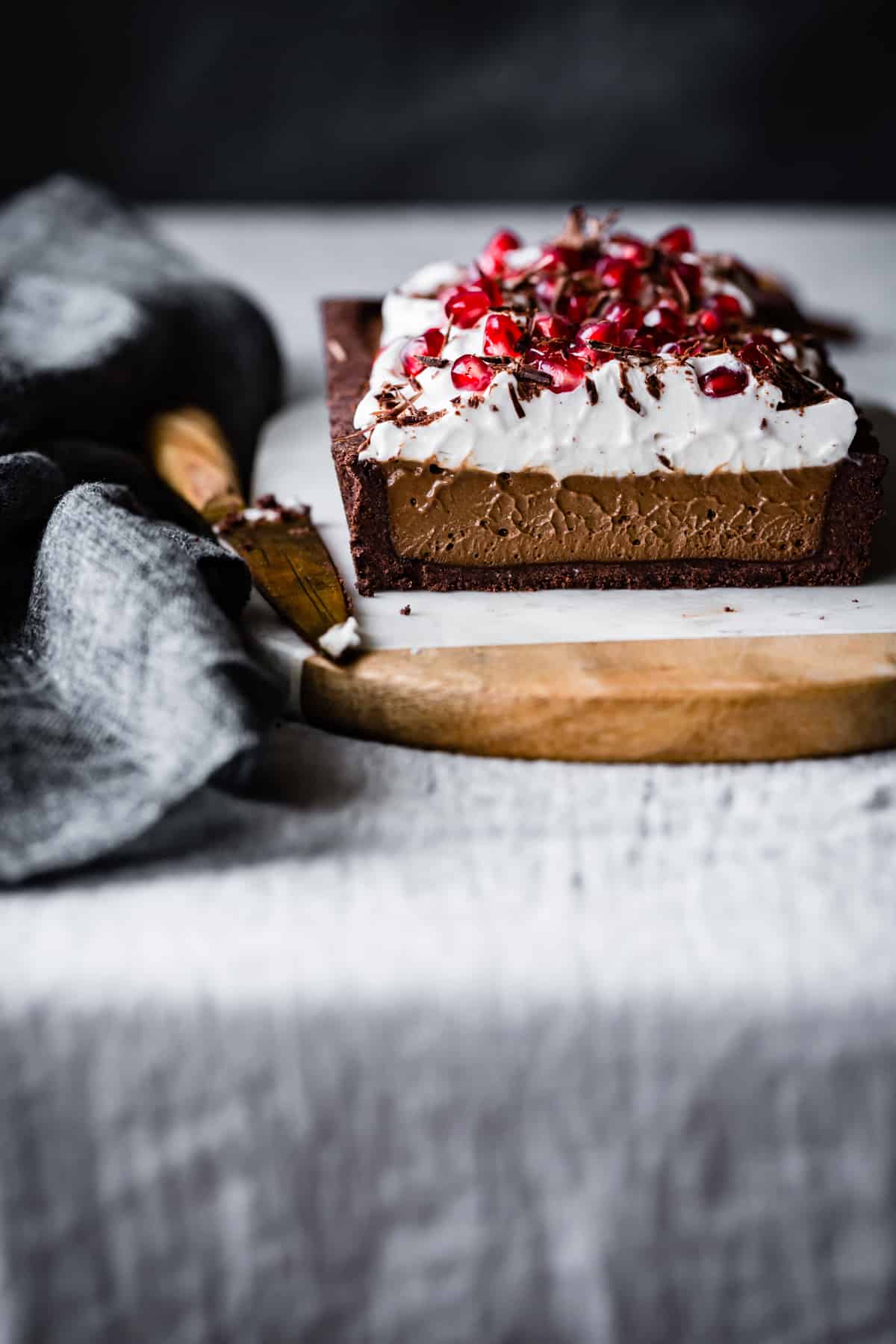 The chocolate truffle filling in Alternative Baker is essentially a ganache with an egg added to make it custardy. It's flavored with fresh bergamot if you can find it, or earl grey tea if you can't, and it gets finished with a swoop of whipped cream, a drizzle of fruity olive oil, and a pinch of flaky salt. It's one of our absolute favorite desserts in the book. During testing when our kitchen was overflowing with sweet upon sweet, it was the one treat that Jay hoarded in the fridge, refusing to give any away, savoring bite by bite until it was finally gone a week later. For the vegan version, I knew I could swap the cream in the ganache for coconut milk, but how to replace the egg? 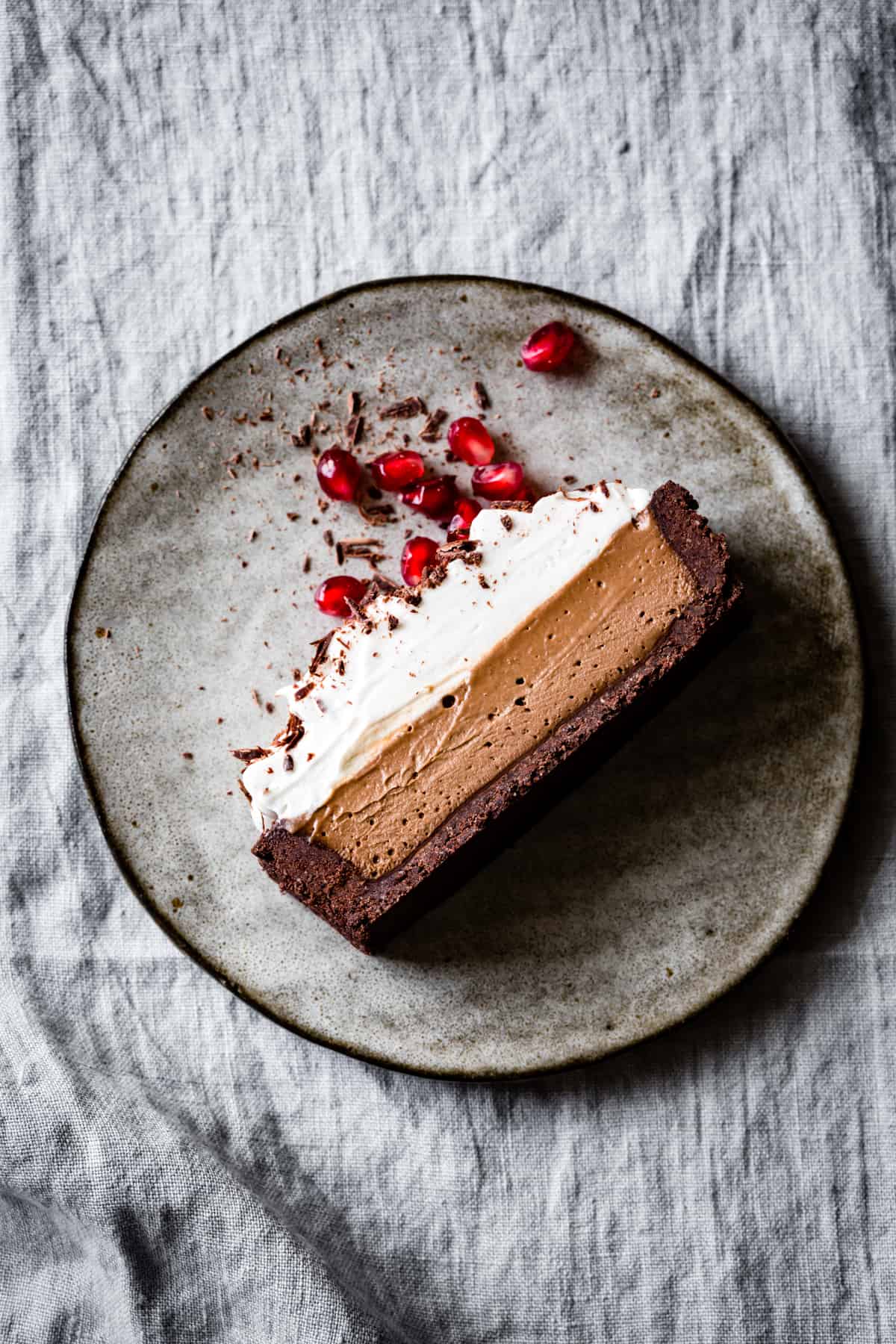 Eventually I gave up on a traditional custard and decided to try a soaked cashew base set with coconut oil and chia seed and sweetened with maple syrup. It worked like a charm. I made the first iteration on New Years Eve Day in a frenzy of tying up loose ends. "I've wanted to make this tart all year – resolutions be damned!" I thought as I pressed cocoa crust into tart pan, ground chia seeds in a coffee grinder, and pureed filling in my trusty blender. When it was set, I ate a slice on the couch feeling that the year was, in a sense, complete. 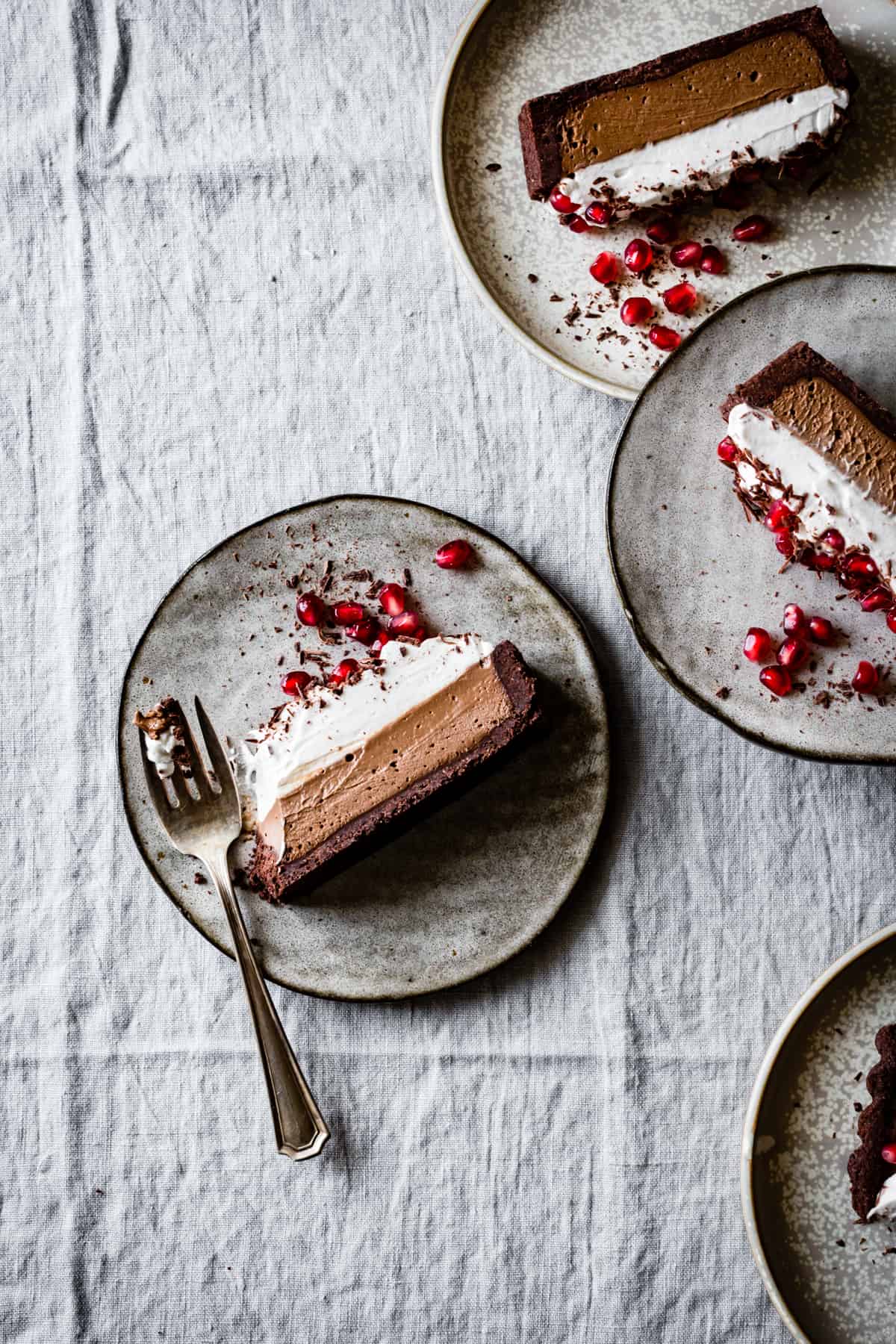 The crust of this chocolate cream tart tastes like really good Oreos thanks to Dutch-process cocoa powder, almond flour, and just the right dose of salt. A thin coating of dark chocolate creates a barrier between filling and crust, helping to keep the crust crisp. The filling sits somewhere between pudding, mousse, and cashew-based vegan chocolate cheesecake, with a deep chocolate flavor from natural cocoa powder and mild sweetness of maple syrup. Whipped coconut cream creates a mild counterpoint to all that chocolatey goodness, and chocolate shavings (and pomegranate arils, if you've got them) pretty it up.

Since I couldn't leave well enough alone, I also made a grain-free version of this chocolate cream tart using a no-bake crust of almonds, cocoa powder, and maple syrup. The classic flavor and crisp crust of this baked version is my favorite, but I'll share the grain-free version tomorrow. Stay tuned! 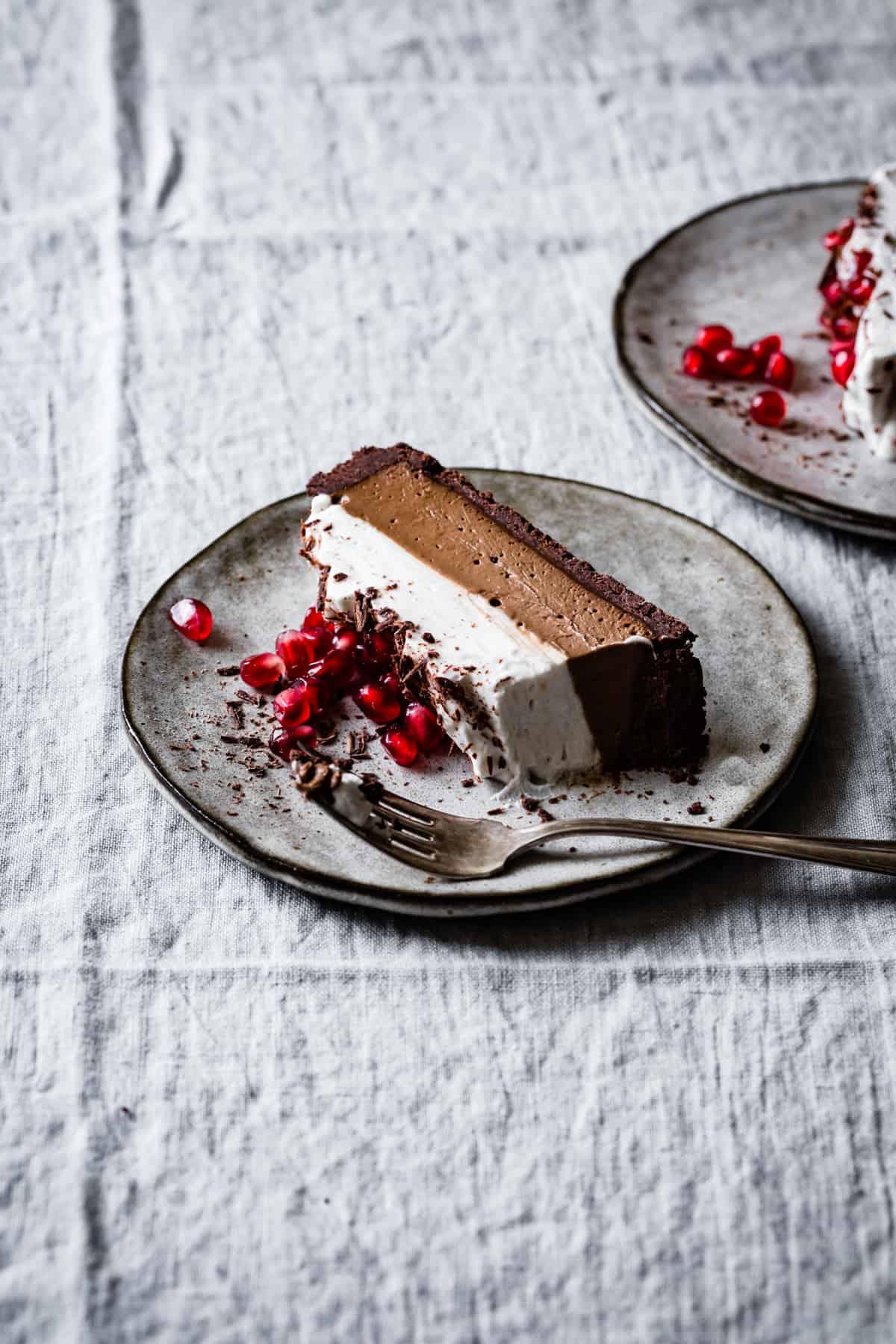 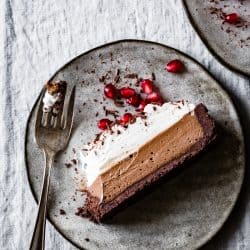 For the best flavor, I usually make the crust with dutch-process cocoa powder and the filling with raw cacao powder or natural cocoa – I usually have all three lying around (I’m weird). But the recipe will absolutely work using just one type of cocoa if you prefer, so take your pick. The filling is mildly sweet, so feel free to add another tablespoon or two of maple syrup to your taste. The chia seed in the filling helps it emulsify and thicken; if you don't have access to chia seed, flaxseed will *probably* work, it will just have a more pronounced flavor. I buy whole chia seeds and grind them finely in a coffee grinder, then measure out 2 tablespoons of ground seeds. Pomegranate arils on top add a fresh pop of color and flavor, but if they aren’t around, the tart is lovely without them, too. Or top this tart with fresh berries in the spring and summer. Nutritional values are based on one of ten servings. 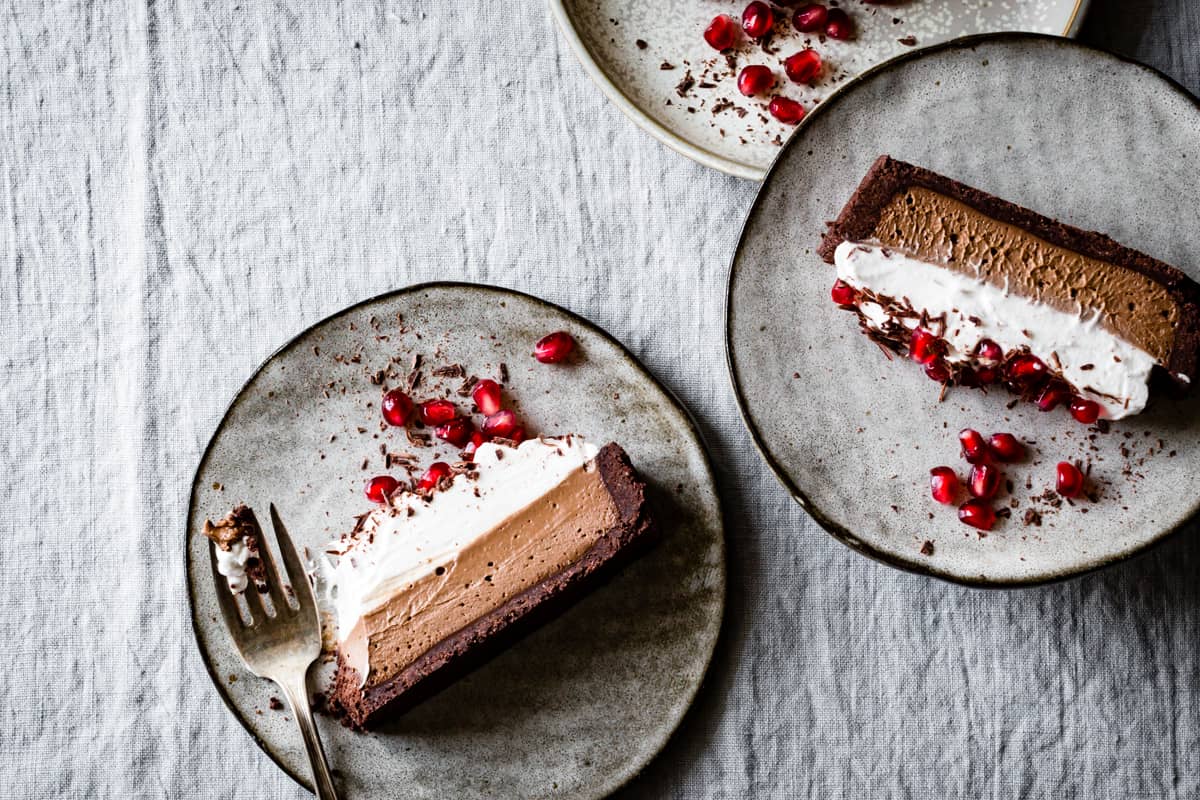