The classic Pimm's Cup cocktail gets a summery twist from fresh plums and basil.

Even though I lived a mere 10 minute drive from San Francisco's acclaimed vegan restaurant Millenium for a decade, it wasn't until it moved to Rockridge that I finally got to eat there.

After a quick and only semi-sketchy Bart ride, I met Sarah for a dinner date one night last week. A server greeted us with lettuce leaves and a bowl of dip made from herbs and legumes. The menu was a panoply of deliciousness that was impossible to choose from, but we managed to settle on a pickle plate, a starter of little polenta cakes with mushrooms, cashew cheese, and something akin to ratatouille, and a creamy red lentil curry topped with a crispy cake of rice and lots of pretty vegetables. Dessert was a raw and vegan peach cheesecake on a chunky pistachio crust.

I'd heard mixed reviews of Millennium throughout the years, so perhaps my expectations were low, or maybe it was the fabulous company, but I absolutely loved our meal.

On my way to the ladies' room, I saw a familiar crop of blond hair and recognized it as belonging to SF's food critic Michael Bauer, the man most feared by every restauranteur in the Bay Area. Back in my pastry cook days, restaurant kitchens would post a snapshot of his face along with a sign that read, "If you see this man, notify a manager immediately." Executive chefs would personally plate his meals, extra courses and amuses bouche would be added on, and the atmosphere in the kitchen would become unbearably tense until he left, chefs anxiously awaiting his verdict in the paper in the coming weeks.

Back at my seat, I revealed my finding to Sarah, and we wondered whether the restaurant was privy to the diner who would decide their fate with a few taps on a keyboard. We decided to ask the waiter.

Our server looked confused and mumbled something that sounded like, "I don't know who that is."

It was then that I feared for Millennium.

As it turned out,Michael Bauer was not enjoying his meal as much as we.

During all of this drama and intrigue, I sipped another delectable menu item, a Pimm's Cup packed with muddled pluots and fresh herbs. Pimm's Cups have been popping up on menus everywhere, and for good reason. The gin-based spirit dates back to the mid 1800's where it was invented by the owner of an oyster bar who offered up tankards to aid digestion. It has the complex notes of an Italian aperitivo or an old-fashioned gin and tonic – at once bitter, sweet, spicy, and herbaceous. I first learned about this drink from Todd at HonestlyYum who posted this stunning version. I always order a glass from Hog Island Oyster Company in San Francisco's Ferry Building, which comes adorned with fragrant bay leaves. And sometimes I'll whip up a pitcher filled with strawberries and mint a la Kimberley Hasselbrink's version in Vibrant Food.

While I eagerly await a return visit to Millennium with my mostly vegetarian man, who is the least harsh restaurant critic I've ever met, I'll be mixing up these basil plum Pimm's cups. They're quick to put together once you've tracked down a bottle of Pimm's No. 1, a bit of gin and a bottle of good ginger beer. This gets the sweet/sour/boozy ratio just right, while a few slices of plums or pluots plus a handful of basil leaves and some crisp slices of cucumber add a touch of summer. 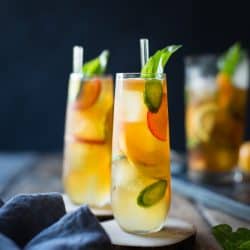 Inspired by Kimberley Hasselbrink's Vibrant Food and Millennium's Pluot Pimm's Cup. All ounce measurements are by volume. Nutritional values are based on one of two large drinks.